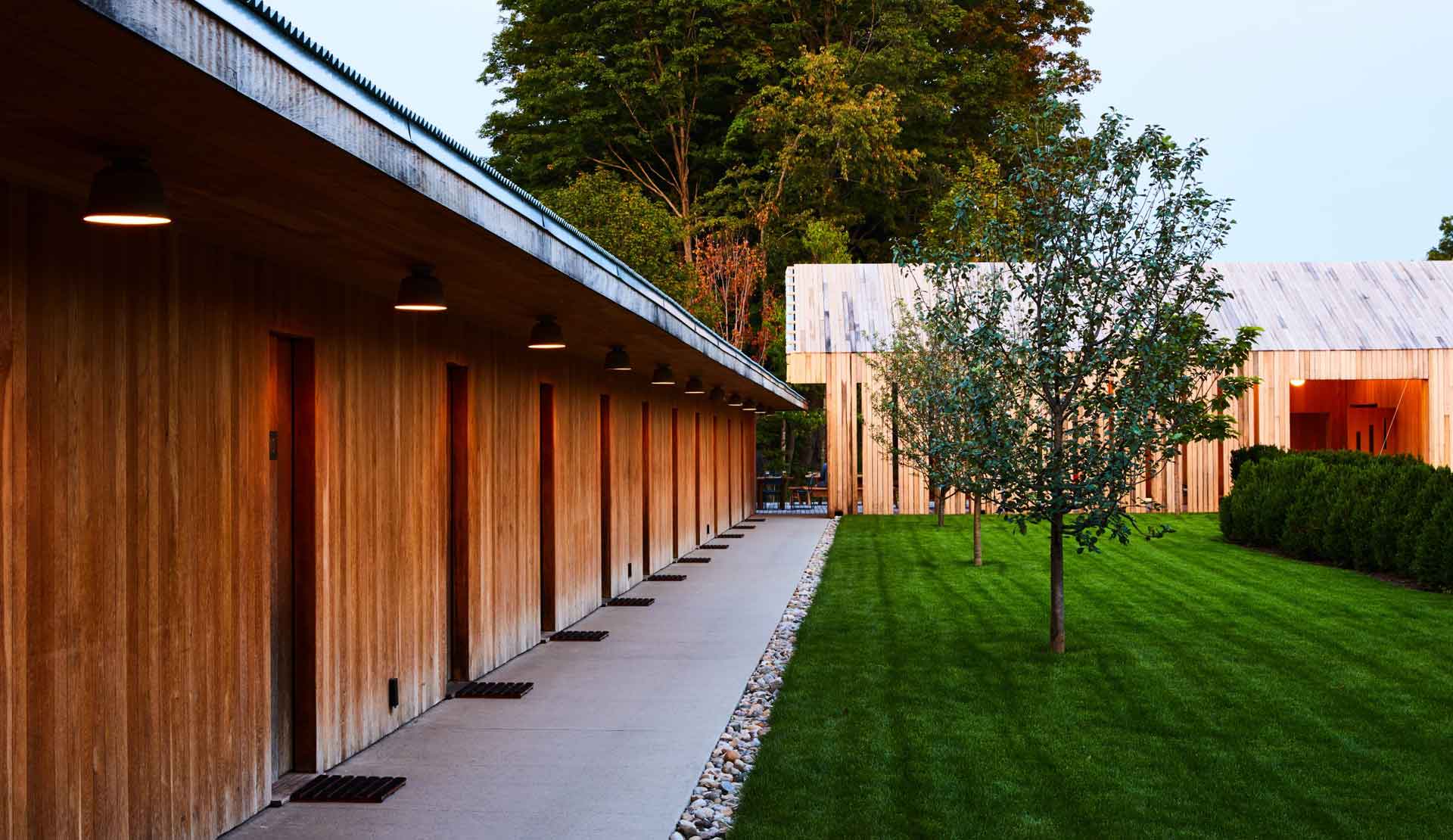 North Adams, Massachusetts was an industrial town. Then it became a museum town. With the recent opening of Tourists, it can now call itself a cutting-edge boutique hotel town.

The first thing we wanted to ask Ben Svenson is why he named his hotel after the dirtiest word in travel. Tourists. Mutter it under your breath and you evoke the image of a destructive cultural viking, rolling through town as part of an unconscious horde, erasing what feels special about the place. In an ideal world, we would never be rampaging tourists, and always enlightened visitors. Interested travelers. Or, as the mayor of one overrun Italian city requested, “temporary cultural inhabitants.”

The founders of Tourists, an exciting new hotel in the Berkshires, have no use for such euphemisms.

Here in North Adams, Massachusetts, they’ve reclaimed the word. On the site of what was once the ’60s-era Redwood Motel, a group of partners came together with the goal of creating a self-contained 18-room clubhouse. But the project grew, and mutated, and drew in surrounding properties, and by the time it opened in 2018, this former motel on the banks of the Hoosic River featured all the ecological wonder of the Berkshires, coupled with high-end amenities and a visual sensibility inspired by the celebrated design oasis of Sea Ranch, California. 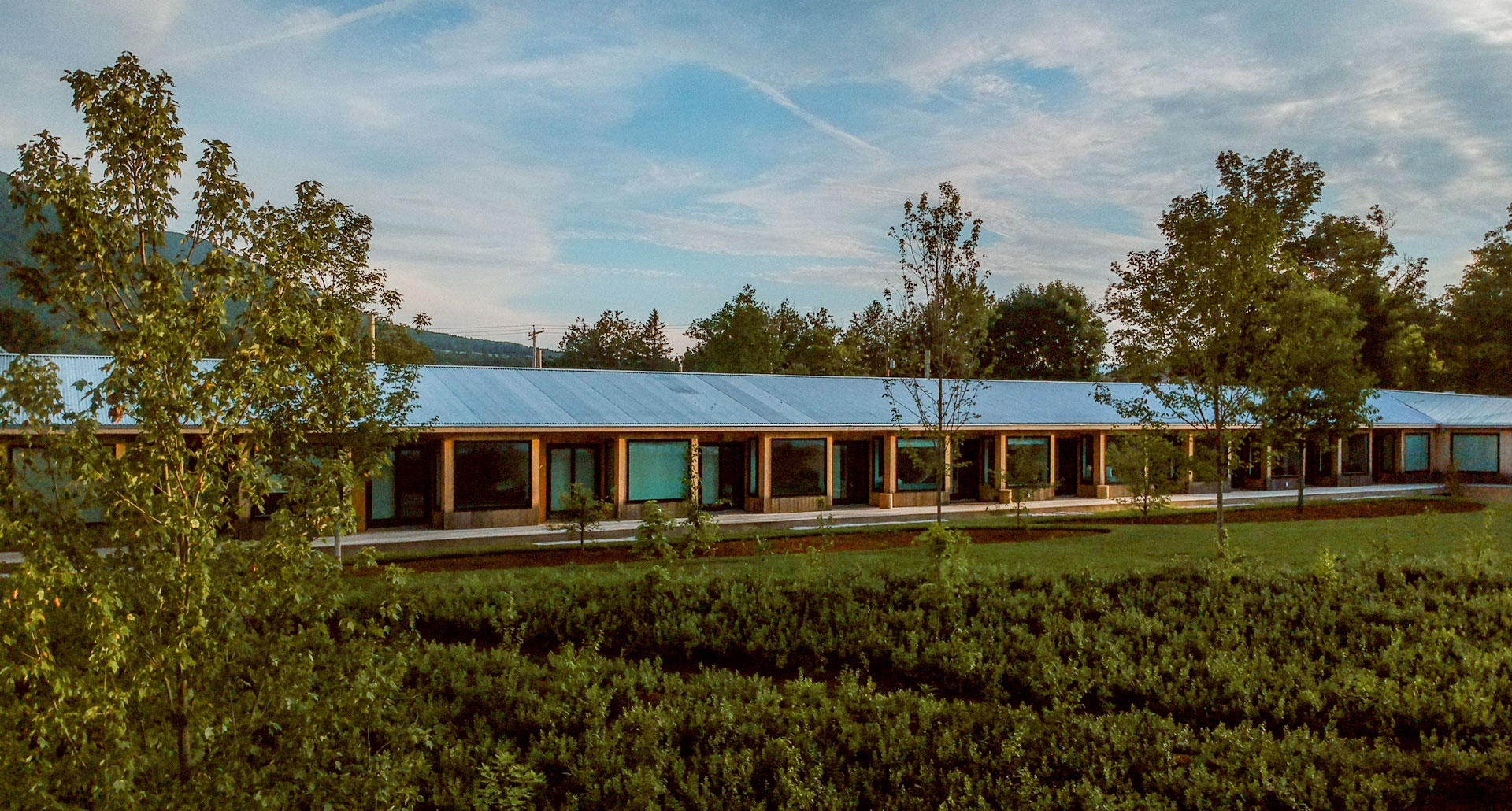 20 years ago, this would not have been the hotel you’d expect to find here. North Adams is a city that was long synonymous with the decline of American manufacturing. These days, it’s better known for hosting the largest contemporary art museum in North America. Svenson’s answer to the question — why Tourists? — spans both of these realities.

But first, the literal answer. The history of tourism in the northern Berkshires goes back at least a hundred years, with the construction of the scenic Mohawk Trail in 1914. During the trend’s heyday in the 1940s and ’50s, road signs sought to lure tourists from their scenic drives to restaurants and lodging. As he got to know the space that would become Tourists, Ben Svenson, part of an impressive group of founding partners, found one such old, faded wooden sign.

It displayed a single word, and you can guess which one. “That was a convention from the Mohawk Trail,” Svenson explains, “to have this word Tourists with an arrow.” And considering all the connotations of the word today — vikings, selfie sticks, etc. — “it just felt so radical.” 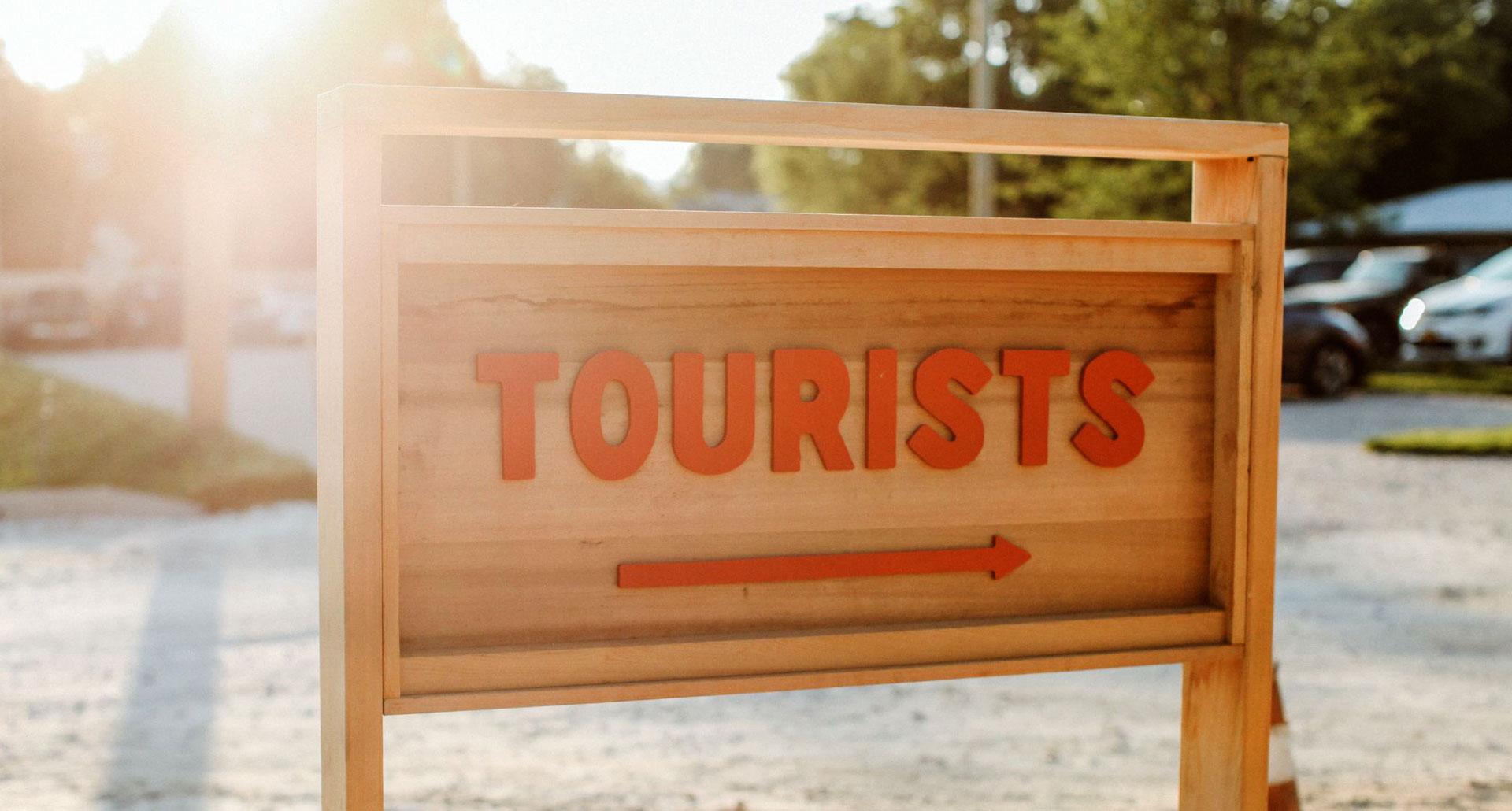 They named their hotel Tourists (well, technically they named it Tourists Welcome), but the sign isn’t the only reason why. North Adams is a city that’s by all accounts still in the process of revival. In 1985, Sprague Electric — a massive complex of buildings that headquartered the city’s major employer — closed, devastating a city where it employed, in some cases, multiple members of the same family. Just a year later, the community saw a path forward. The project, the Massachusetts Museum of Contemporary Art (MASS MoCA), would take up residence in the abandoned buildings of Sprague Electric and, hopefully, provide a big enough draw to revive the city. After a grueling march through fundraising struggles and political courtship, MASS MoCA finally opened in 1999.

And while the museum wasn’t, as some had hoped, a “silver bullet” to economic revival, it has, over time, made a significant difference. As Joseph Thompson, founding director of MASS MoCA, put it in an interview last August, “The last five years, there’s a new vibe in town, and you can see it and feel it. Younger people are moving to town. There are new restaurants opening up all the time. There’s been probably twenty-five million dollars just in hotel investment.”

As we put it when we first added Tourists to Tablet shortly after their opening: “The Berkshires are undergoing the sort of revival that travel trend pieces are made of.” The pandemic has only illuminated the importance and the capability of cultural institutions to power an economy. Annual attendance numbers at MASS MoCA have reached 300,000 in the past, with gawkers and enthusiasts drawn by the biggest names in contemporary art, and the artists drawn perhaps by nothing so simple as the sheer quantity of space. In Building 5, home to one large gallery exhibit at a time, artists build giant, awe-inspiring pieces from scratch. See one of these pieces and you get a sense of the scale of this museum, and how it might anchor an economy.

“The art and the way that we make it here in collaboration with artists is more akin to filmmaking — in which there are artistic directors and lighting and sound and there’s obviously a creative director, the artist,” said Thompson in the documentary about his institution, Museum Town. “There’s a whole slew of people who are coming together to make a very complicated work of art.”

In short, an art-powered economic engine. Undoubtedly, it’s an engine that brings tourists, and brought Tourists, too. “Tourists does not exist without MASS MoCA,” affirms Svenson. Nearly every founding member of the hotel group came to know North Adams through the museum. In the case of John Stirratt, bassist-turned-hotelier, the connection is the Solid Sound Festival, a massive event at the museum every other summer headlined and curated by his band, Wilco.

North Adams has become more and more of a museum town since the arrival of MASS MoCA, a community of artists and temporary cultural inhabitants both. Still, there’s a divide between the museum visitors and those who’ve lived here for decades. “This is a funny place to have a very high-end hotel,” admits Svenson. And here we have another reason for the name. “Just to call a spade a spade felt interesting.”

It’s a self-awareness that grows from a desire to close the distance between the disparate elements of North Adams. “We had a growing conviction that people were coming here and not sleeping here, because they didn’t have a place that spoke to them,” says Svenson. “If you could connect those dots of getting the visitors of MASS MoCA to actually sleep here, you could not only create a business that was dynamite, but employ a bunch of people whose prospects were not so great for employment in the area.”

The visitors of MASS MoCA definitely sleep here. Why wouldn’t they? We love to feature restored motels on Tablet. This one’s different. “If you do what I do for a living,” says Svenson, a developer, “the first thing you do is introduce yourself to your neighbors.” On his rounds, he found that most of them wanted to sell, a sign of where North Adams was at the time. Before long, 30 parcels of land united to create 55 acres (now over 80) of what one reviewer aptly described as “something of an adult summer camp compound.” Walking trails pepper the campus (aided by a wooden suspension bridge built over the Hoosic River).

Peppered across the compound: a saltwater pool, various sculptural installations, a lodge for dining, and a cozy space called the Airport Rooms. Svenson and partners stumbled upon this last structure, created from a ’40s-era rooming house, in a state of mid-century suspended animation. “John said when he saw the Airport Rooms, he said, ‘oh my God, it’s like a Hollywood prop house,’” remembers Svenson. “It was like, Brillo Pads from 1952 still in their packaging.” Today, it provides a purposely intimate, too-small venue for live music and cocktails. It’s among the features most missed in this age of open air and six-foot distances.

The broken-down Redwood Motel, meanwhile, was replaced by another warm, stylish, and hip little hideout. Svenson wanted the experience of the rooms to feel like you had direct contact with the outside world. Keeping the features of the motel they enjoyed — namely, your own door and that comforting sense of repetition — they added their favorite creature comforts. Back decks, outdoor showers, and “bay windows the size of a full mattress.”

Then there’s that striking white oak siding. This is where Svenson really lights up. “That’s completely taken from Sea Ranch’s design principles of finding a locally sourced, natural material that does not require treatment and will last a long time,” he explains, a little giddy. “Sea Ranch was all about creating buildings that were basically so integrated into their setting that they could visually disappear — and increasingly so over time, as the buildings become aged in a way that’s almost part of the woods. Tourists was an attempt to do that.”

“They had redwood. For us, we found white oak.” 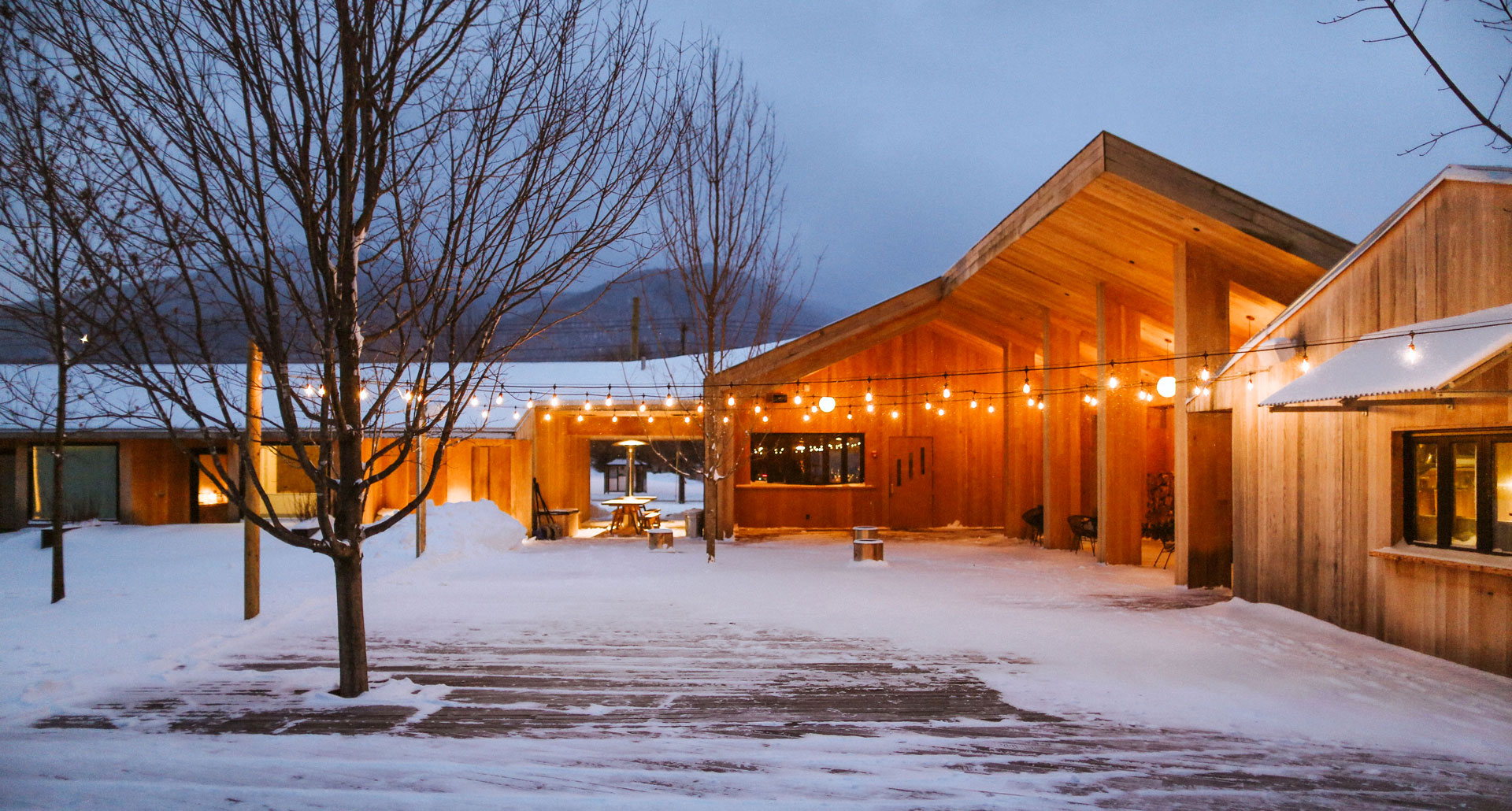 After COVID forced the closing of the hotel and the museum, both are currently reopened with the appropriate adjustments. Thanks to its ample outdoor space and private entrances, Tourists has found itself better positioned than many hotels to offer a comfortable escape. An art and adventure program they began in 2019 was a particular godsend for guests as some of the usual attractions around the city were shuttered. If you were there now, you’d find seasonal activities — fire-building classes and snowshoeing — along with some they’ll keep year-round. Take a guided hike into the woods, an art walk around North Adams, go stargazing and eat s’mores, or visit the outdoor exhibits at The Clark (the other renowned art museum nearby).

And if you were there right now, you don’t have to think of yourself as a tourist. But really, you are one. And if that feels confrontational to you, Svenson’s sure you can handle it.

“I believe our audience likes to be challenged,” he says. In fact, the name is almost a conceptual art piece in itself. “It’s like if you opened a supermarket and you named it ‘food,’” he says. “There’s something really kinda funny about that.”