A 15th-century Dutch monastery has been infiltrated by modernity: bursting with quirk, bordering on sacrilegious. But the old building has the ultimate defense. Should the government decide, every contemporary flourish in the hotel must be broken down and disappeared in just 90 days.

Monasteries make perfect hotels. They’re beautiful, godly places. It’s in their old bones to lodge, to feed, to host. They’re ancient, generally, and if they’re still standing — there’s a reason. They’re sturdy and well-built. Well-located. Massive and useful. So the fact that Kruisherenhotel in Maastricht, Netherlands was once a monastery, the Kruisherenklooster, where its friars bound books and cared for the sick and poor, is not what makes it so interesting to us as a hotel. And it’s not that it once served as a barracks for the French during their revolution in 1794, or even that it eventually fell into the hands of the Nazis, then the Americans, then back to the Dutch in the years of World War Two.

What makes Kruisherenhotel so interesting to us is that it is, frankly, a little bit sacrilegious. A little profane, if you will. Ignore the exterior, the picture of a 15th-century Gothic monastery, and walk through the blinding copper tunnel that serves as an entrance. The site that greets you within the monastery’s ancient church-turned-lobby is less an abbey for monks than it is the the headquarters of a design-obsessed alien race, come to Earth to merge their culture with a worthy human totem. They even laid an egg — but we’re getting ahead of ourselves. 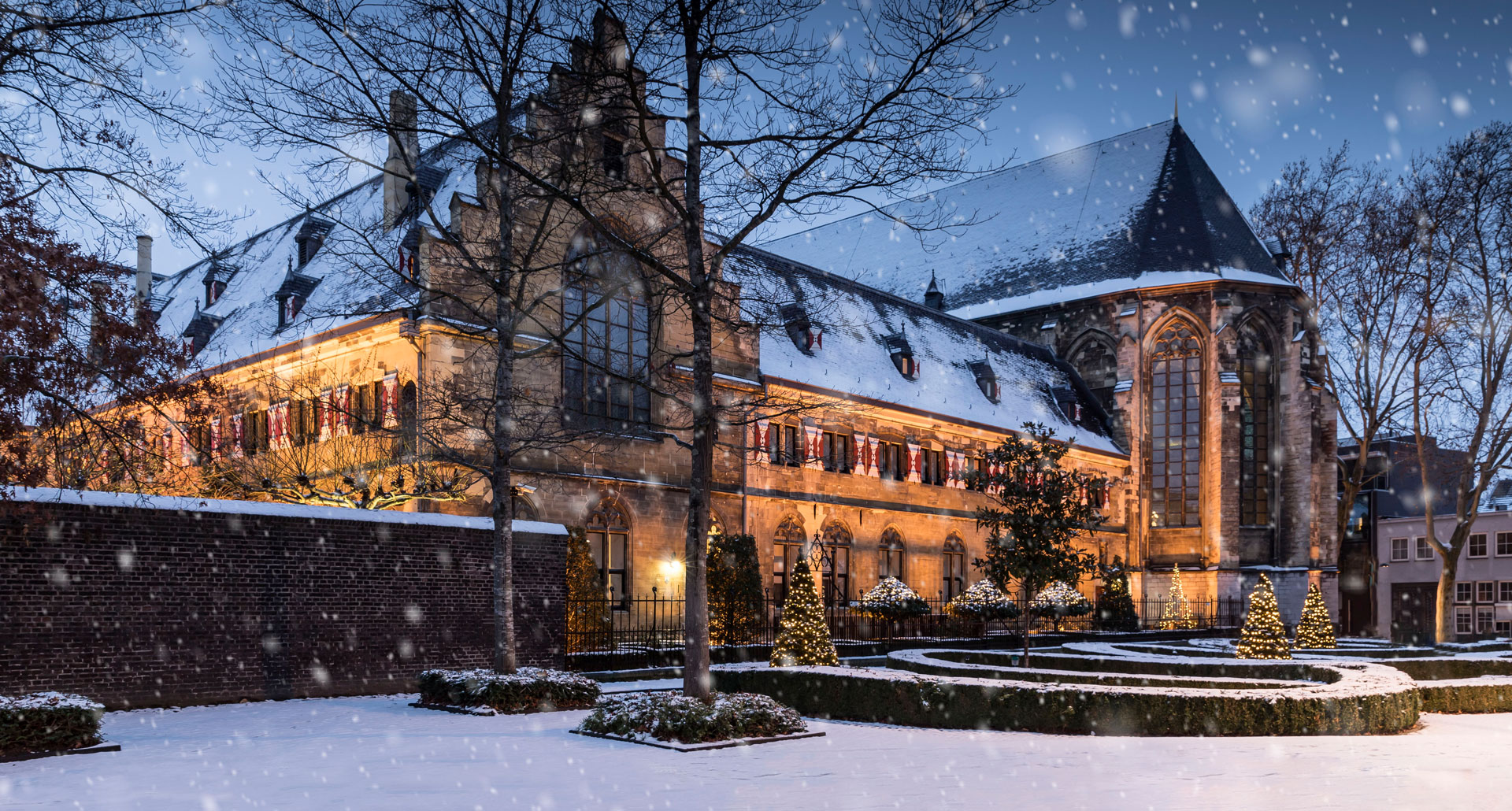 As they say, obviously. Let’s start with the copper tunnel, one of Kruisheren’s most recognizable features. The work of German designer Ingo Maurer during the turn-of-the-millennium renovations that made this place a hotel, it joins furniture and lighting designs by Le Corbusier, Philippe Starck, and Marc Newson in a celebration of modern and contemporary visual design. Swooping light fixtures, a glass-walled elevator, and buzzy artworks sit next to stained glass windows. The aforementioned egg — a blanche white oval that serves as a peculiar office space inside the old church slash hotel lobby — makes the intentions of Kruisherenhotel perfectly clear. The old and the new here combine to eye-popping effect.

If you don’t like the futuristic commingling of the sacred and the secular, the Dutch government has anticipated your objections. The Oostwegel family — already the shepherd of several historic buildings around the country into modern functionality — purchased the monastery in 2000. But the purchase came with a stipulation. Every new addition to the historic monastery and church would have to be completely reversible. And not just reversible — but reversible in 90 days. It’s obvious they could remove certain fixtures easily, but it’s not just the free-floating office spaces that would need erasing. If the order came down, a representative of the Oostwegel Collection tells Tablet, “we would then have to delivery the monastery to the state as it was when we moved into it.” Since that first day some two decades ago, complete walls, ceilings, and floors have been added to previously open spaces in the monastery to create extra guest rooms. All of it would have to go. 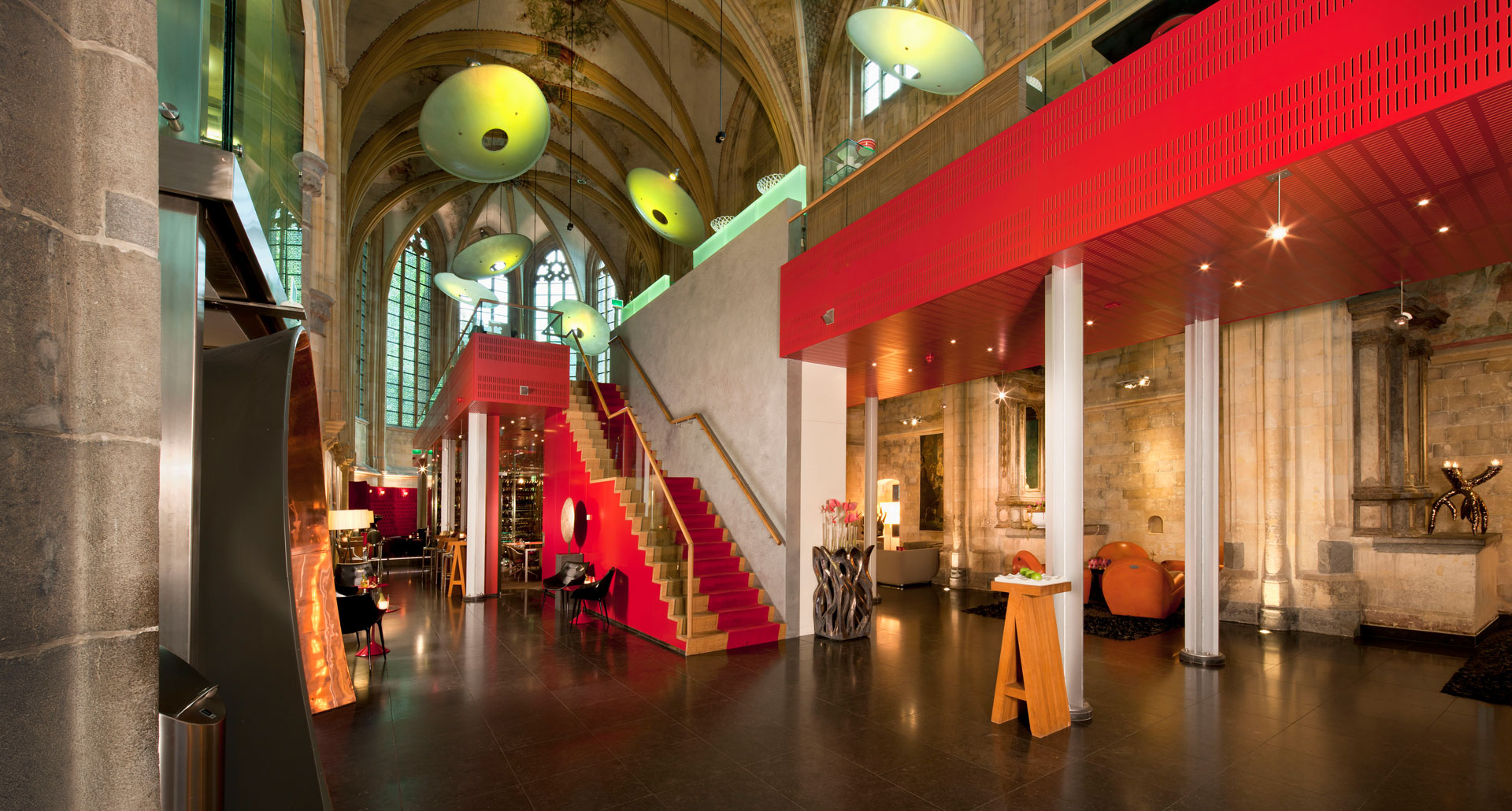 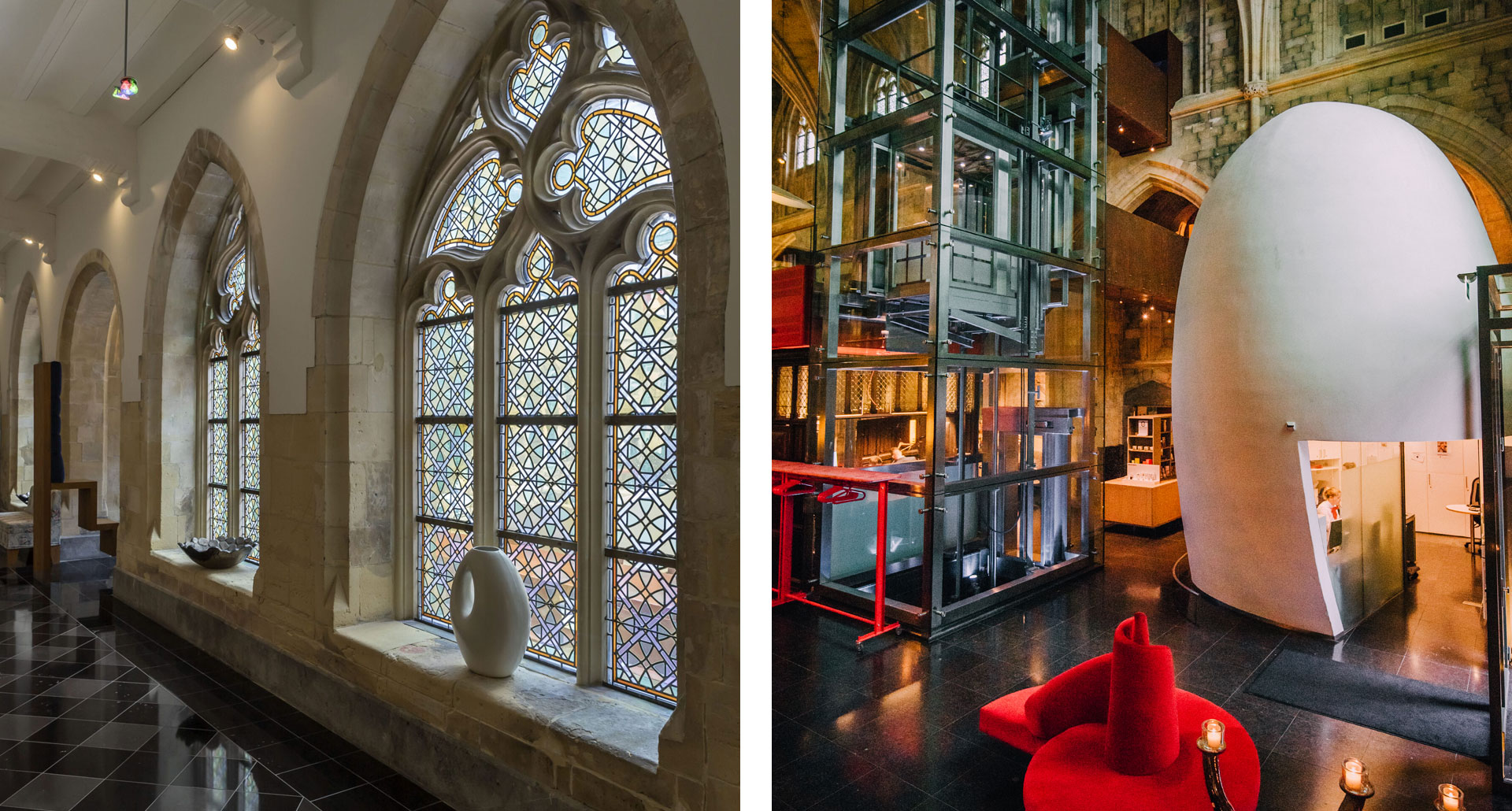 It’s a scenario that’s difficult to envision, but one that’s informed nearly every aspect of the hotel’s design. Kruisherenhotel adheres closely to a principle they call box-in-box, which means as little as possible is affixed directly to the old walls. Instead, complete structures are built within the existing structure, and, for the most part, you can remove any one piece without affecting the foundation.

What could trigger the 90-day sprint, we have no idea — a decree from God, perhaps, to put the aliens in their place. But that was the rule. Given 90 days of notice, Kruisherenhotel must be able to revert back to its original state.

“I hope that never happens,” general manager Floris Kemper tells Tablet, envisioning a mad scramble to scale back the award-winning design and evacuate art pieces, to rip to shreds the mezzanines and the glass elevator that allows guests to marvel at parts of the structure from vantages they’d never enjoy otherwise. “But there is a plan for it.”

15 years after the grand opening in 2005, 60 “handsome modern hotel rooms,” as we wrote in the Kruisherenhotel’s initial introduction to Tablet, “are anything but ascetic.” Most sit in the former monastery, while a handful occupy another historic building — the Gatekeeper’s House — and one brand new building set in the monastery gardens, the contemporary Casa Nova.

Throughout all three, the experience is defined by a minimalist aesthetic — heavy on white space, frosted glass, and hardwoods — interrupted by the bold artwork splashed across the walls. Just another contrast in a hotel defined by them. In the bridal suite, heavenly cherubs float on the wall next to a Nespresso machine. In the Kruisherensuite, the image of a royal procession curves around the wall towards the whirlpool. In the luxury suites, king-sized beds sit snugly, custom-crafted for the monastery spaces.

Take the glass elevator from the monastery down to the church and you’ll find not just the lobby but Kruisheren Restaurant, a glorious corner of the building serving steak tartar under the original frescoes and towering leaded-glass windows. Go to the wine bar and you’re in the old choir, where new red upholstery sizzles against original pale walls. 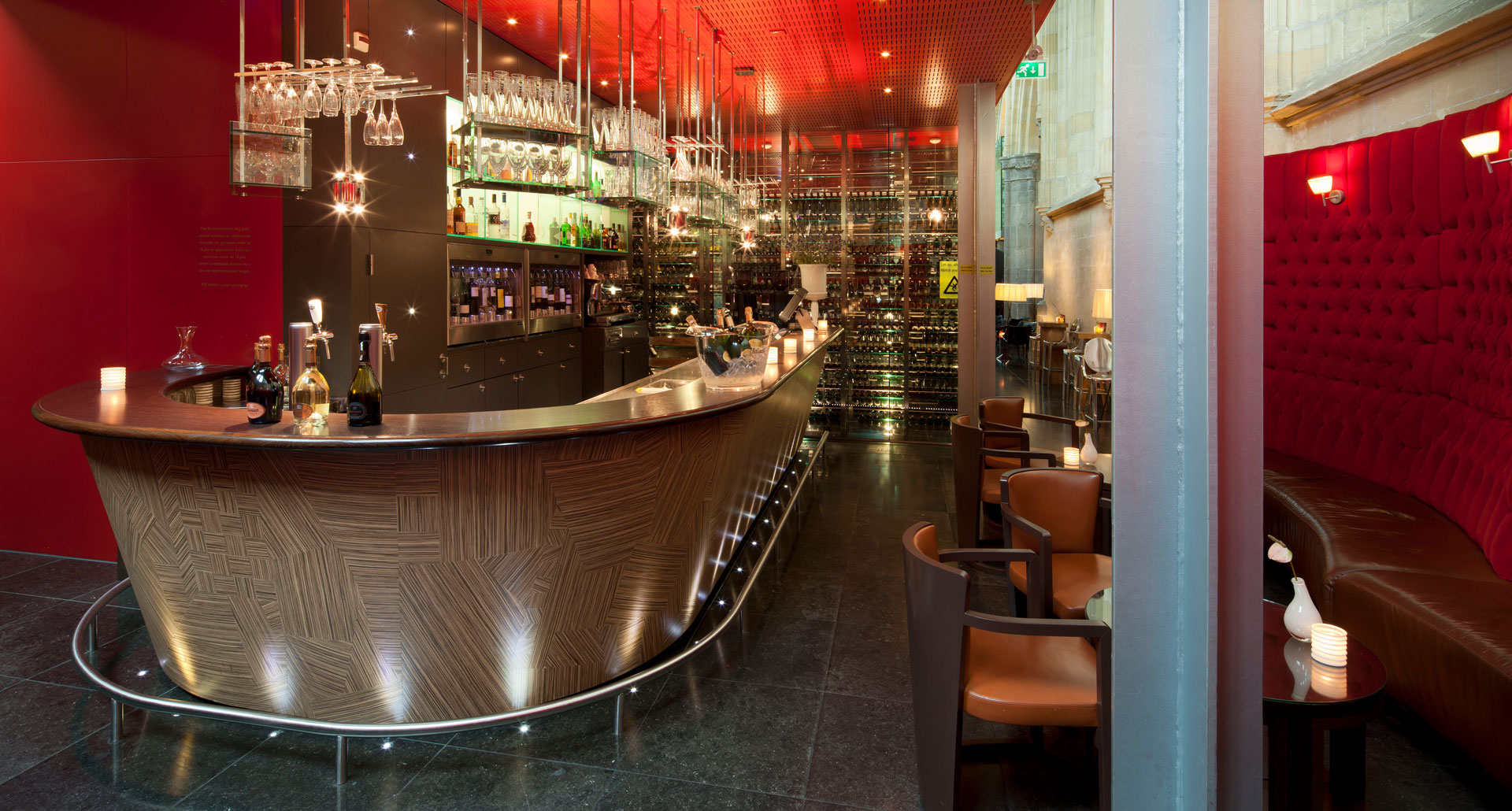 Is all of this really sacrilegious? In the hotel’s defense, the Kruisherenklooster is not the Vatican. The monastery has a long history, but it’s one that ceased being religious some 200 years ago. The French capture in 1794 meant the end of its original mission, and the years since have been a march from one secular purpose to another, with only a brief return to the sacred in the 1980s when a local parish needed a temporary space. The city managed the monastery complex since around the start of that decade, and besides storage and rehearsal for the opera, they mostly left it alone. At one point, squatters took up residence.

As Kemper would tell you, the monastery’s use today as a hotel — while certainly not the most effective for resuming religious function — does ensure a respect for the building itself, and for the treasures that lie within. No, a hotel isn’t sacrosanct. But it has preserved the history of the place as well as anyone since the departure of the original stewards. Restoration work has been extensive, and murals and frescoes remain safe within its confines, appreciated by guests not unlike they would have had the city turned this place into a museum.

As Kemper told Tablet, “It all comes down to idea of respect. Do we have respect for the history and the place and why it has been built?” Look at the way they’ve handled the design. The way they’ve chronicled its history. Obviously, they do. And besides, adds Kemper, “It’s not a nightclub, it’s a hotel.”

“I think we build on the idea of taking care of people.” 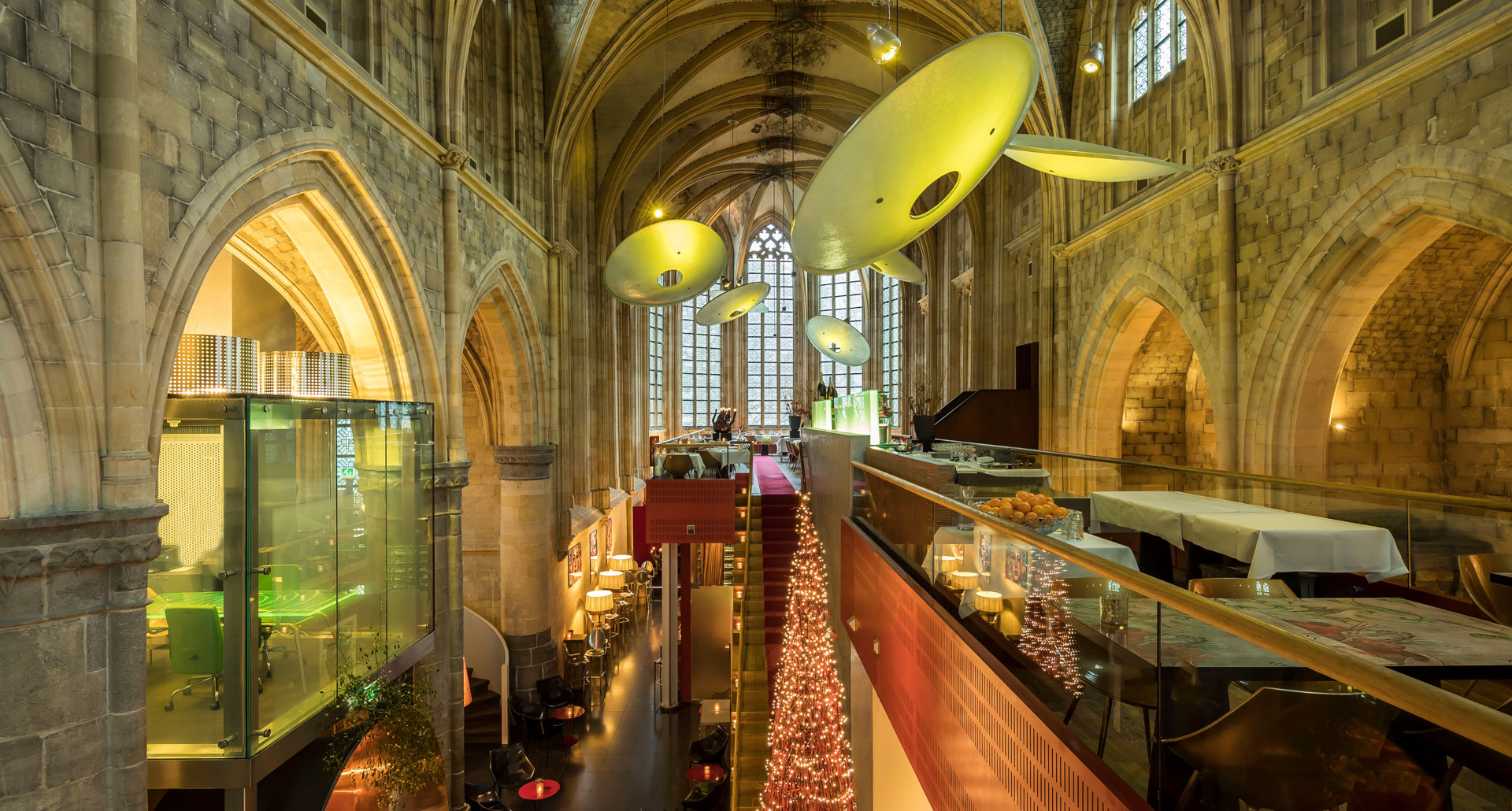 Which brings us, as just about everything has over the better part of the last year, to the pandemic. “It’s been an interesting year,” states Kemper, “let me say that.” Although Maastricht might not be on the itinerary of the average first-time visitor to the Netherlands, it’s no sleepy countryside town. Maastricht, set in the southeast of the country, is among the Netherlands’ most international cities, owing to its location on the border with Belgium, its proximity to Germany, and the draw of Maastricht University.

This is a city for “enjoying the nice things in life,” says Kemper. Eating, shopping, and going out in a city full of ancient architecture and vibrant markets has always been the appeal of this place (there are 19 Michelin-rated restaurants in Maastricht — Kruisheren Restaurant among them). But over the past months, and for the by-now-familiar reasons of the pandemic, the personable staff at Kruisherenhotel have made an effort to point to their guests towards the surrounding nature in the countryside. And for the first time, they see them enjoying a different part of their corner of the world. “Because they went out and found it,” beams Kemper. “They never knew.”

You’ll certainly enjoy the nice things in life when you finally make it to Maastricht. But no matter when you arrive, the staff of Kruisherenhotel will now and forever have a bevy of natural options, all the treasures of the hilly, green region of South Limburg, in their arsenal. In fact, Kemper laughs, before the crises they wouldn’t have thought to put a Dutch wine on their menu. Now that exploring the wineries — along with walking and cycling the countryside — has become such a popular activity, you can expect to see more than one. 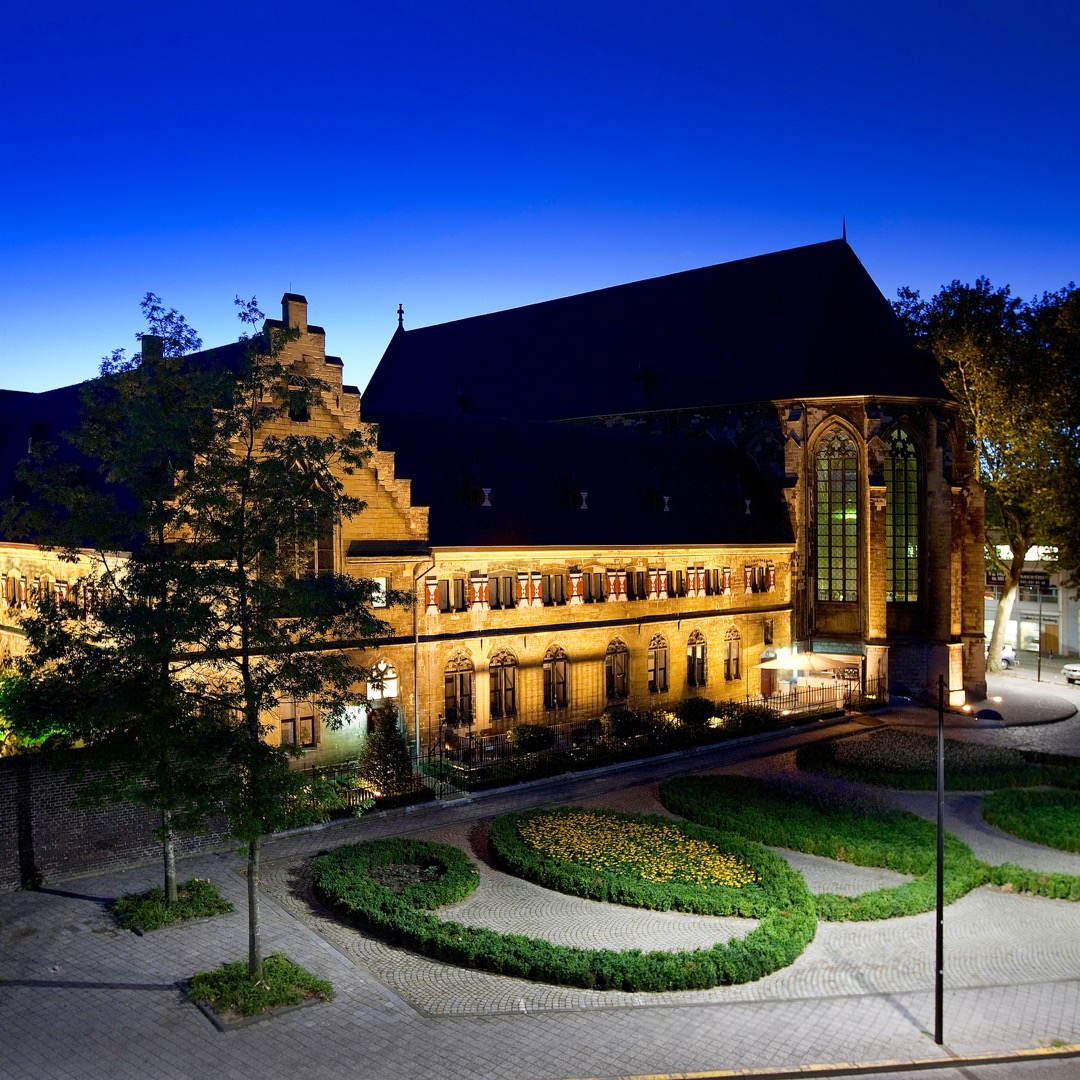 Tablet is your source for discovering and booking the world’s most extraordinary hotels — places where you’ll find a memorable experience, not just a room for the night.

When it’s time again to travel, if you’re considering a trip to the Netherlands, be sure to consider staying at Kruisherenhotel in Maastricht, located in the Limburg province.