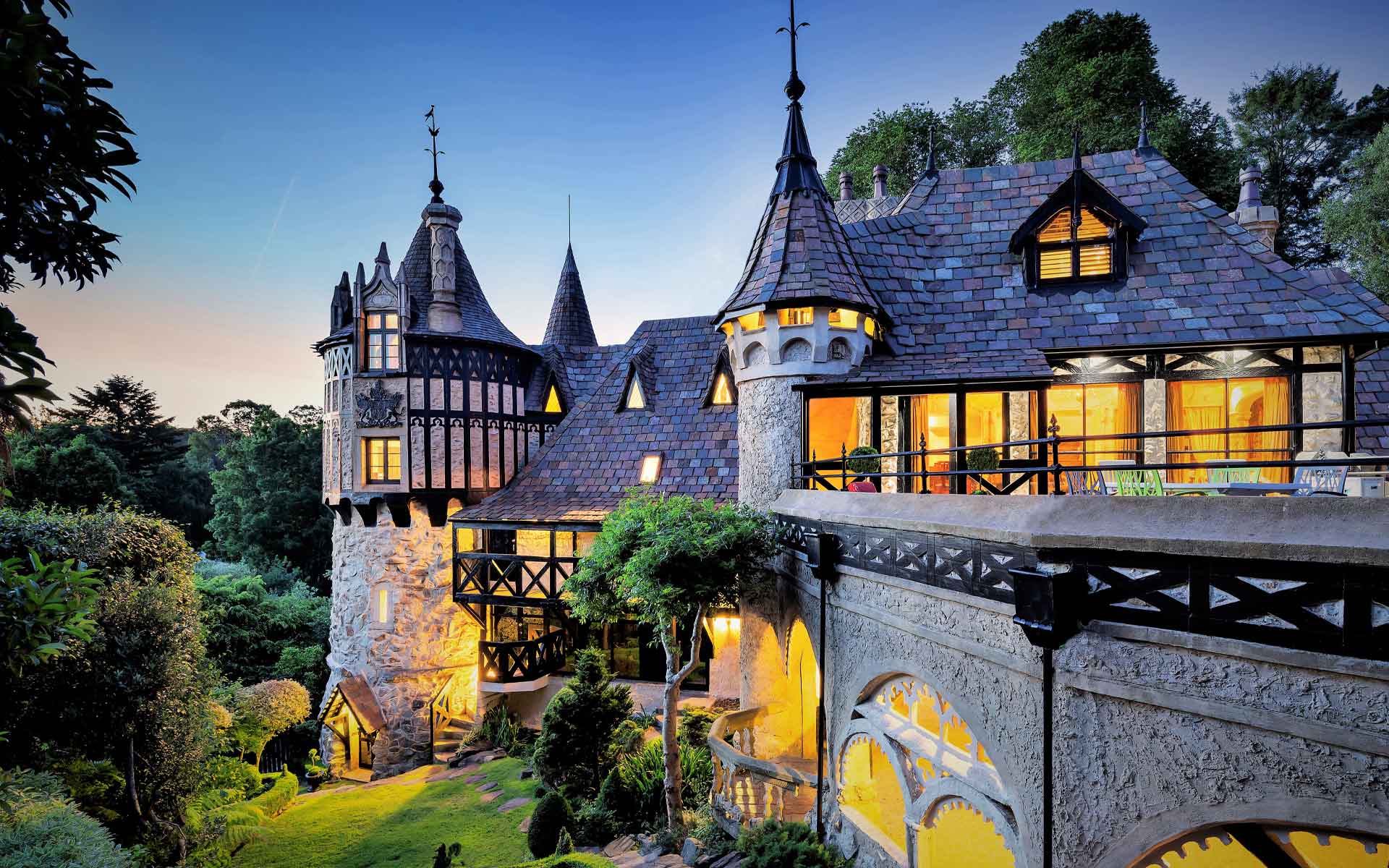 When it opened in 1984, Thorngrove Manor was a response to the bland and banal chain hotels of the day. As boutique hotels in 2020 march further into the mainstream, the mission is much the same for this eccentric castle in South Australia.

Today, boutique hotels are the norm. But before the big chains got into the game and blurred the lines, tossing “boutique hotel” right into the mainstream, those two words conjured images of rebellion and quirky individuality — hotels that were auteur-driven labors of love, more art than accommodation.

Thorngrove Manor — towered, turreted, and filled with layer upon layer of architectural and design detail — is a glorious, gilded throwback to the era when the very first boutique hotels were beginning to sprout up throughout the world, each one an intensely personal reaction to an industry that was a wilderness of monotony.

Hotels like Thorngrove are the reason we’re here today — the reason you’re where you are right now, reading this story on this website. In the 1980s, they took the risks and pioneered the formats that led to the proliferation of unique and interesting hotels that we’re all so familiar with in the 2000s. Nydia Lehmann, co-owner of Thorngrove with her husband, Kenneth, explains the hospitality landscape in 1984 as she saw it: most hotels were standardized. They were replicable. They were “cookie-cutter.”

Thorngrove Manor is anything but. Actually, it’s a Gothic-style castle filled with handcrafted designs and one-of-a-kind antiques. It is, by the very nature of its contents, impossible to duplicate.

“Fairytale is a tad cringeworthy for us.” 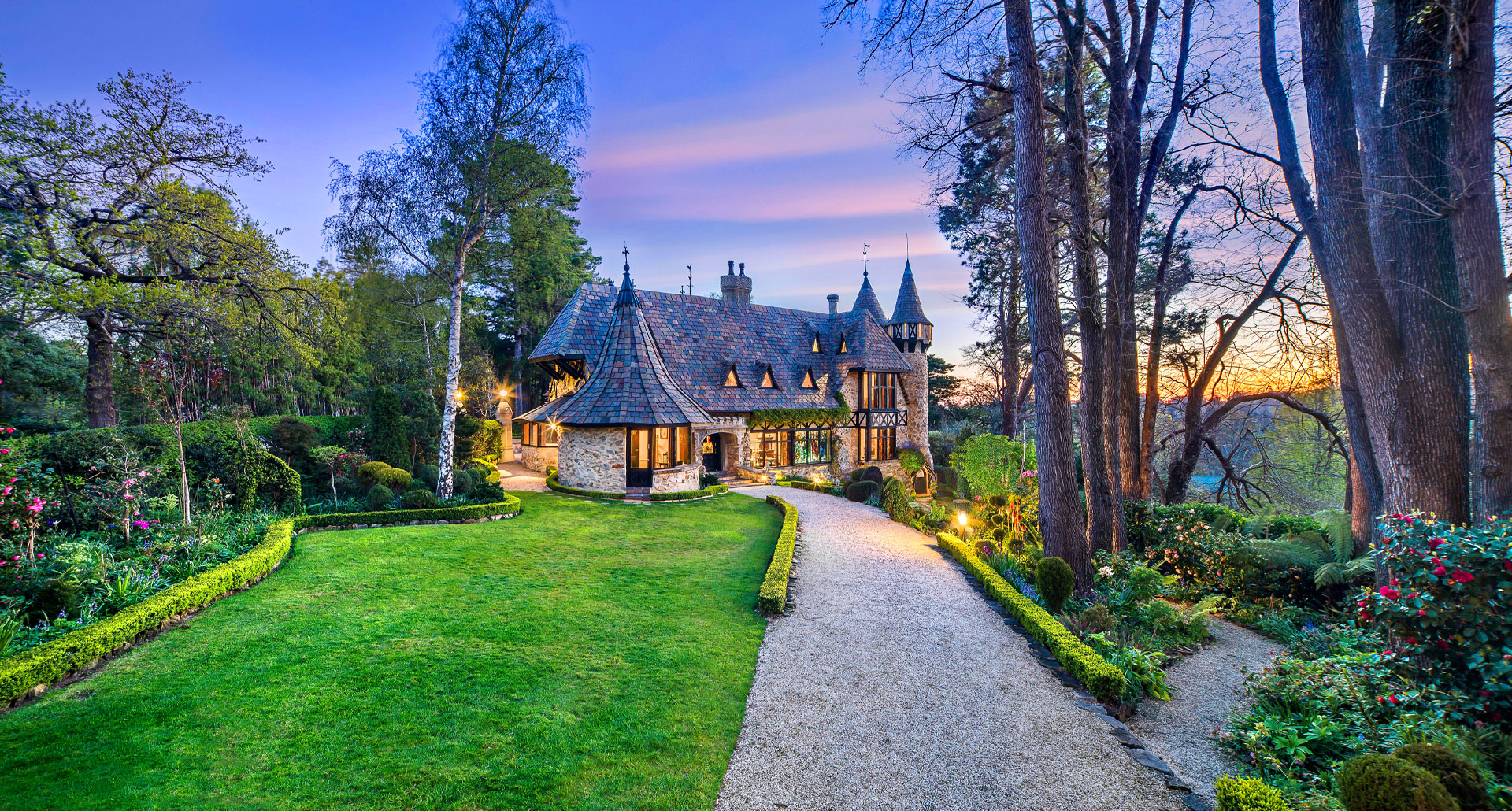 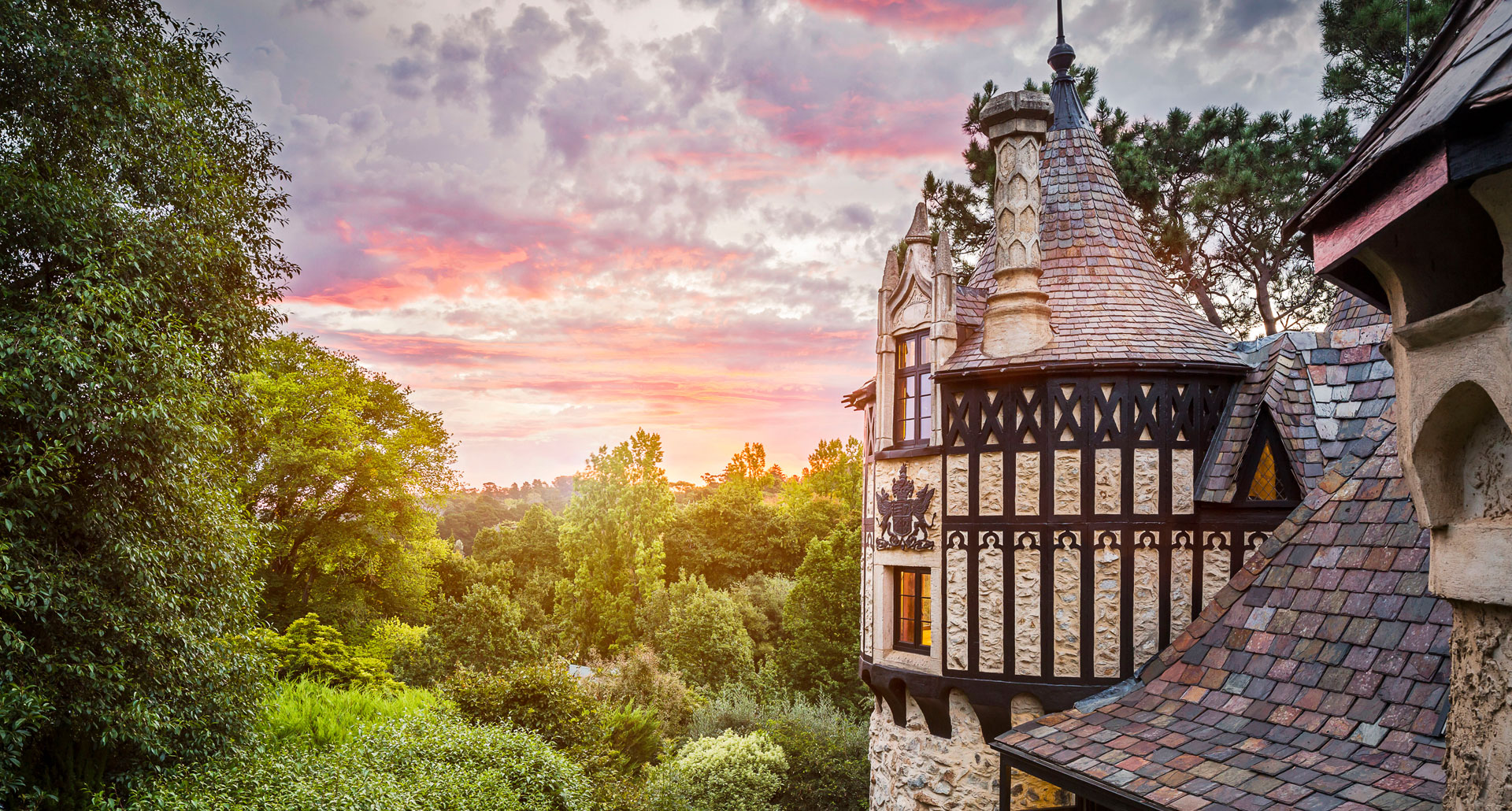 People will always use the word “fairytale” to describe Thorngrove Manor. The architecture and design defy strict placement in a single era, and it’s only natural that the turrets and towers evoke childhood fantasies. Charitably, Nydia accepts whatever label attracts guests to their life’s work. Still, she’ll admit, “‘fairytale’ is a tad cringeworthy for us.”

First of all, the Lehmanns didn’t pull the architecture from picture books. Although you might not expect Gothic castles in the construction heritage of South Australia, their concept is at least partly rooted in the setting.

“Of our two neighboring properties,” Nydia points out, “one has a Scottish baronial tower and the other a stone belltower.”

That’s because the early colonists, as one local writer explained, quickly took to the notion that “nothing succeeds like excess.” Nydia elaborates: the settlers “brought with them the tradition that a mark of success was the ownership of a large impressive country house.” They were out to succeed, and to succeed ostentatiously, “designing imposing, baronial, and gothic-influenced residences” to impress one another.

Thorngrove, then, was meant to be an “expression in architecture” of those high aspirations.

It isn’t a fairy-tale castle — it’s a uniquely South Australian one.

“Timelessness is a challenging concept.” 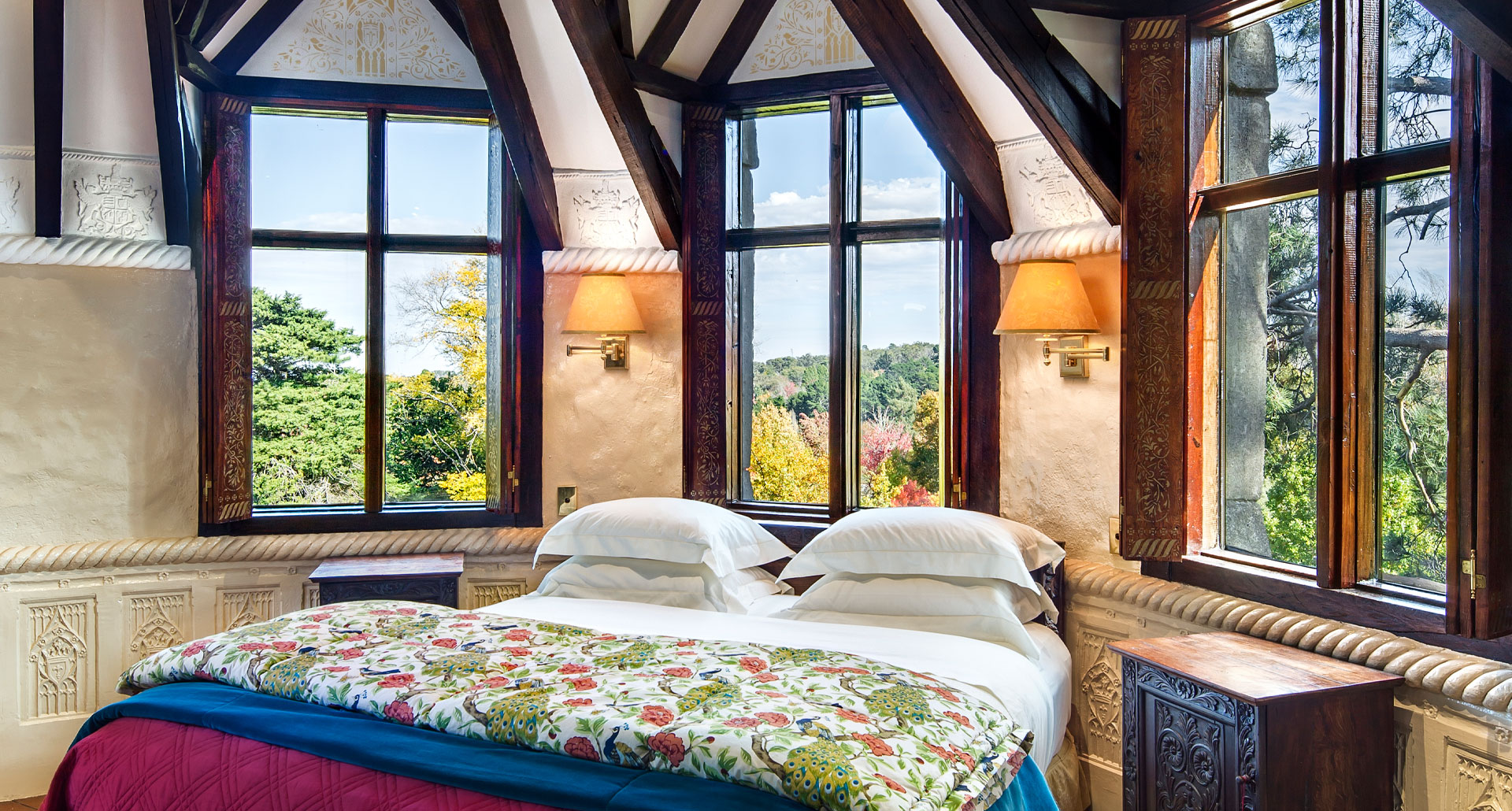 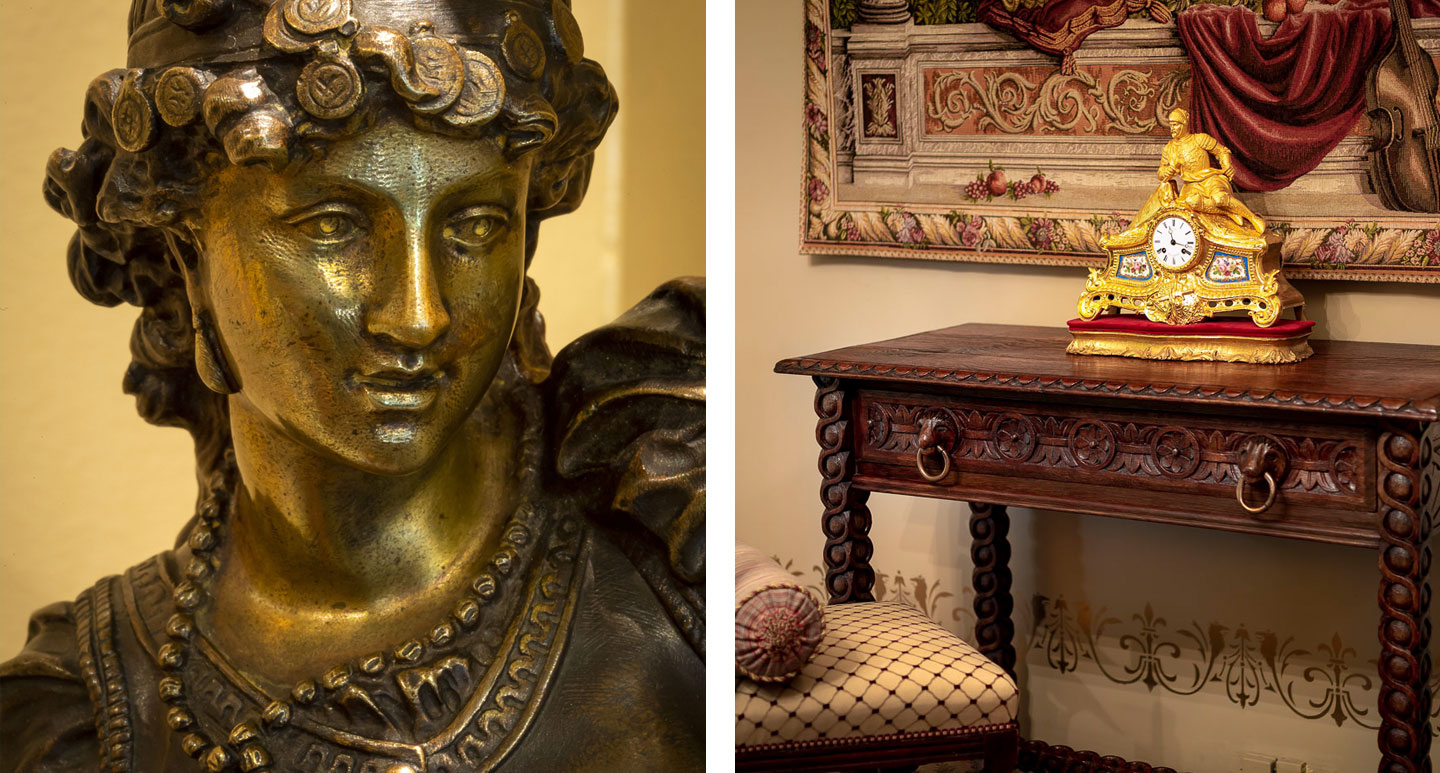 But if it does a disservice to the exterior, ascribing “fairy-tale” to the interiors is a capital offense. The time, effort, and consideration that’s gone into the aesthetic is the opposite of magic: it’s elbow grease. The Lehmanns have built it all, designing ornaments from scratch or curating antiques with names so impressive, so full of adjectives and hyphens, that they require a deep breath before you can begin to say them aloud.

“The basic idea was to create architectural art, a place that could be both viewed and experienced, unlike the current art hotels that hang pictures on the wall, often with a view to sell.” Certainly, the treasures inside are not for sale. In one story, a visitor found himself admiring Thorngrove’s (breathe now) four-meter, four-panel, 1860s leadlight artwork originally commissioned by the House of Lords.

A Scot himself, he asked if he could buy it back.

Not a chance. Each piece in Thorngrove contributes to the singular narrative the Lehmanns seek to convey to the visitor, an attempt to “to touch people’s humanity and imagination” through the timelessness of the curated environment.

How to achieve this lofty goal is a point for the auteur-driven boutique. After working on their property for over thirty years, the owners-slash-architects-slash-designers “know instinctively what suits” each space, whether it’s a vintage clock or a silk embroidery. They’re guided too by the philosophy of William Morris, the 19th-century artist and founder of the Arts and Crafts movement, who believed that the designer of an item should handle its manufacture as well.

To that point, many of the most jaw-dropping items in Thorngrove were crafted by Kenneth himself. Among his most impressive creations? A false ceiling in the Queen’s Chamber, “made of 3,600 individually cast pieces of plaster, every single one of them made, and replicated” by his own hand. 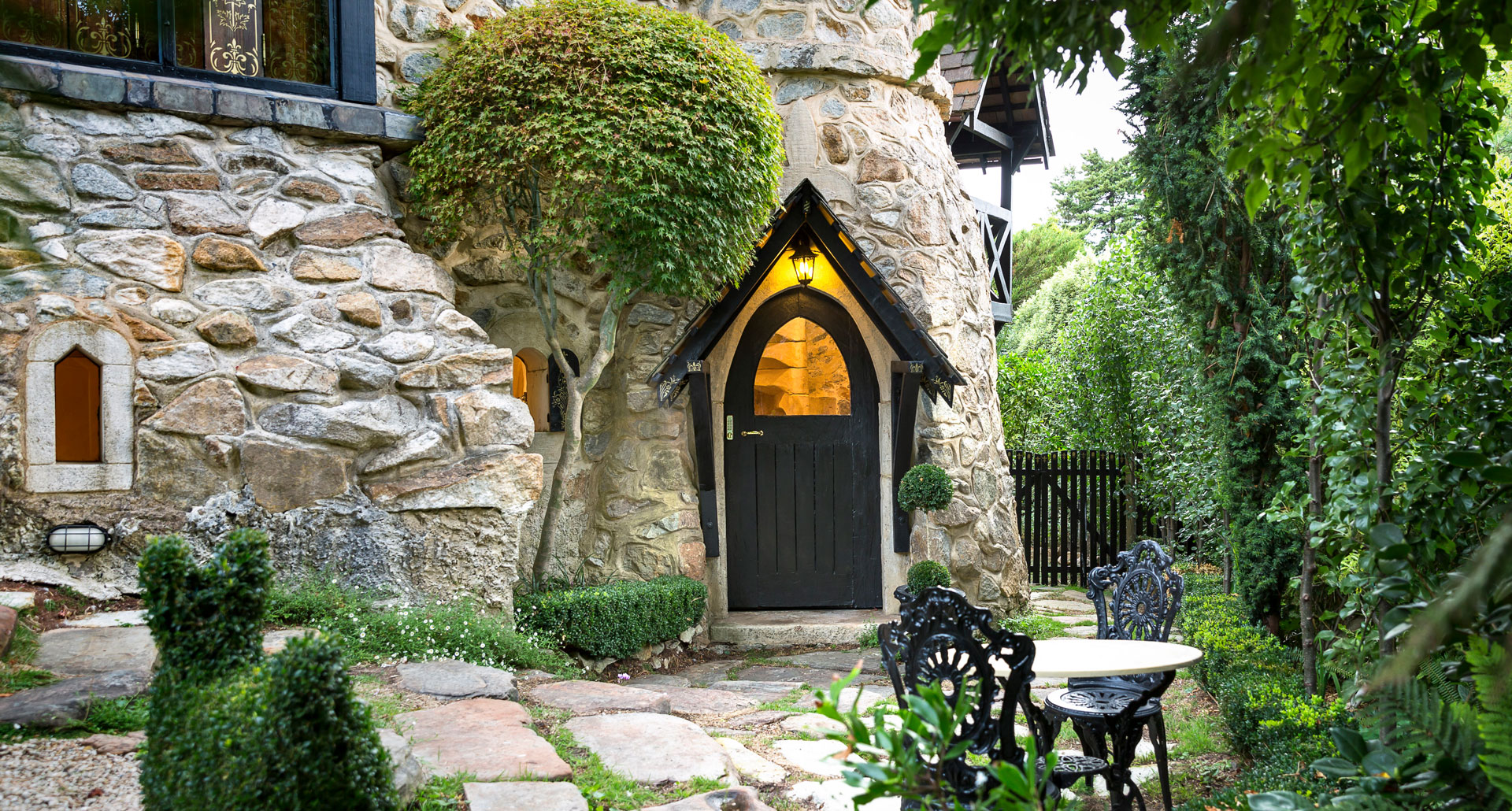 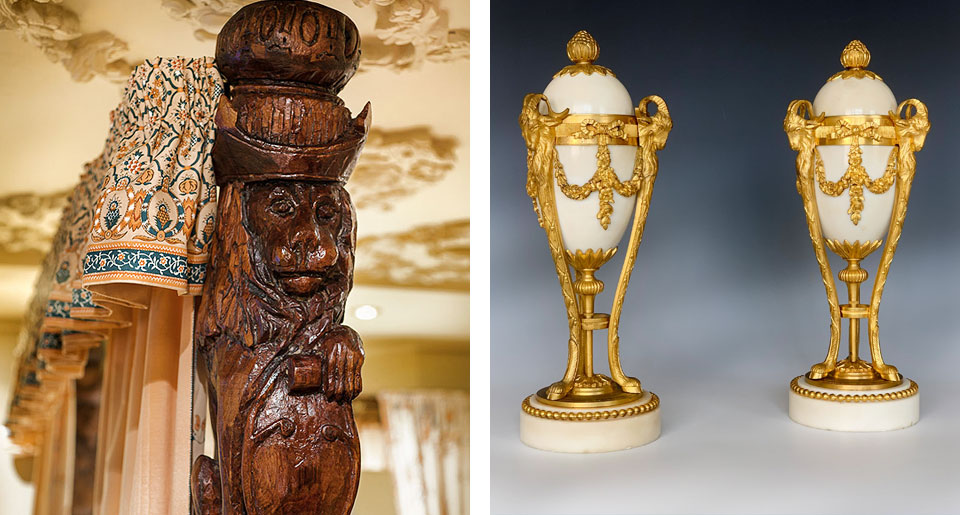 The combination of the owner, architect, and designer into one (or in this case, two) has perhaps its most particular advantages at the outset of the hotel design process. Whereas in standard construction, the architect might have different aims entirely than the interior designer, here their visions are inextricably together.

That’s helpful, since Nydia and Kenneth had big plans for big pieces in each of the five suites. And since, as Nydia puts it, “antique hero pieces are often difficult to fit into existing rooms.”

Knowing what they wanted for those rooms before finalizing construction, the design and architecture could proceed in tandem. The August Moreau statue in the Tower Room could be hoisted inside before a pesky window (as of then unbuilt) could get in its way and spoil the fun. The wall columns in the Queen’s Chamber could be built to perfectly accommodate the antique court cupboard. And in the King’s Chamber, it’s no coincidence that the prized Ballantine stained glass — Nydia’s favorite treasure of them all — fits perfectly into the window.

When you ask Nydia about their process, she emphasizes that all this careful construction isn’t about fitting as many gems as possible into the building. There’s space between the pieces, and there’s room for you to breathe. Nor is the aim to show off the design, but to invite the guest to consider how it affects them. It’s to evoke a “sensory journey” as you move within it.

Texture, light, shadow — all deeply considered, all put together to meet the aims of the auteurs: to “achieve an end which is aesthetic, functional, and artistic.”

“The challenge is to find the perfect piece.” 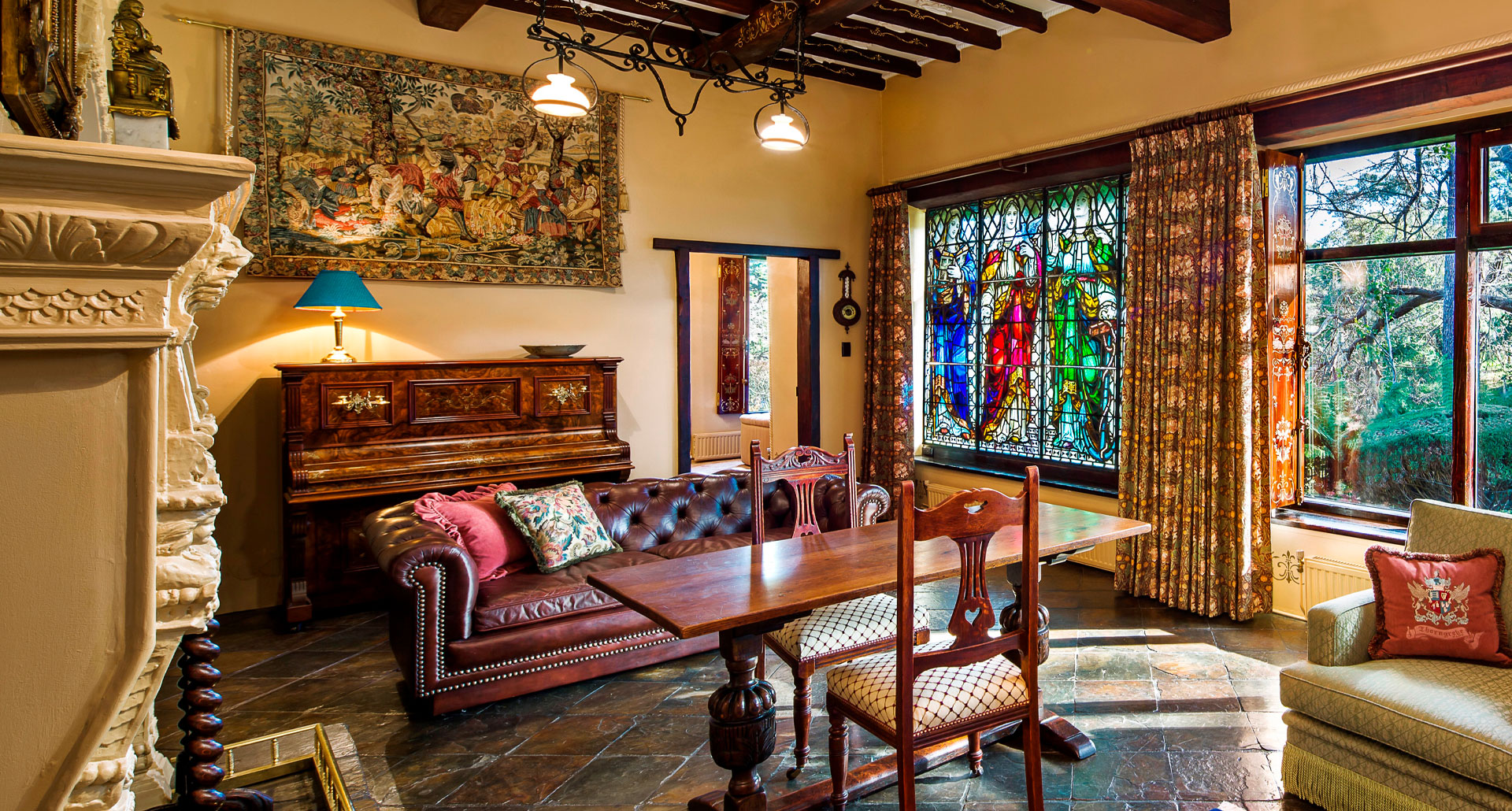 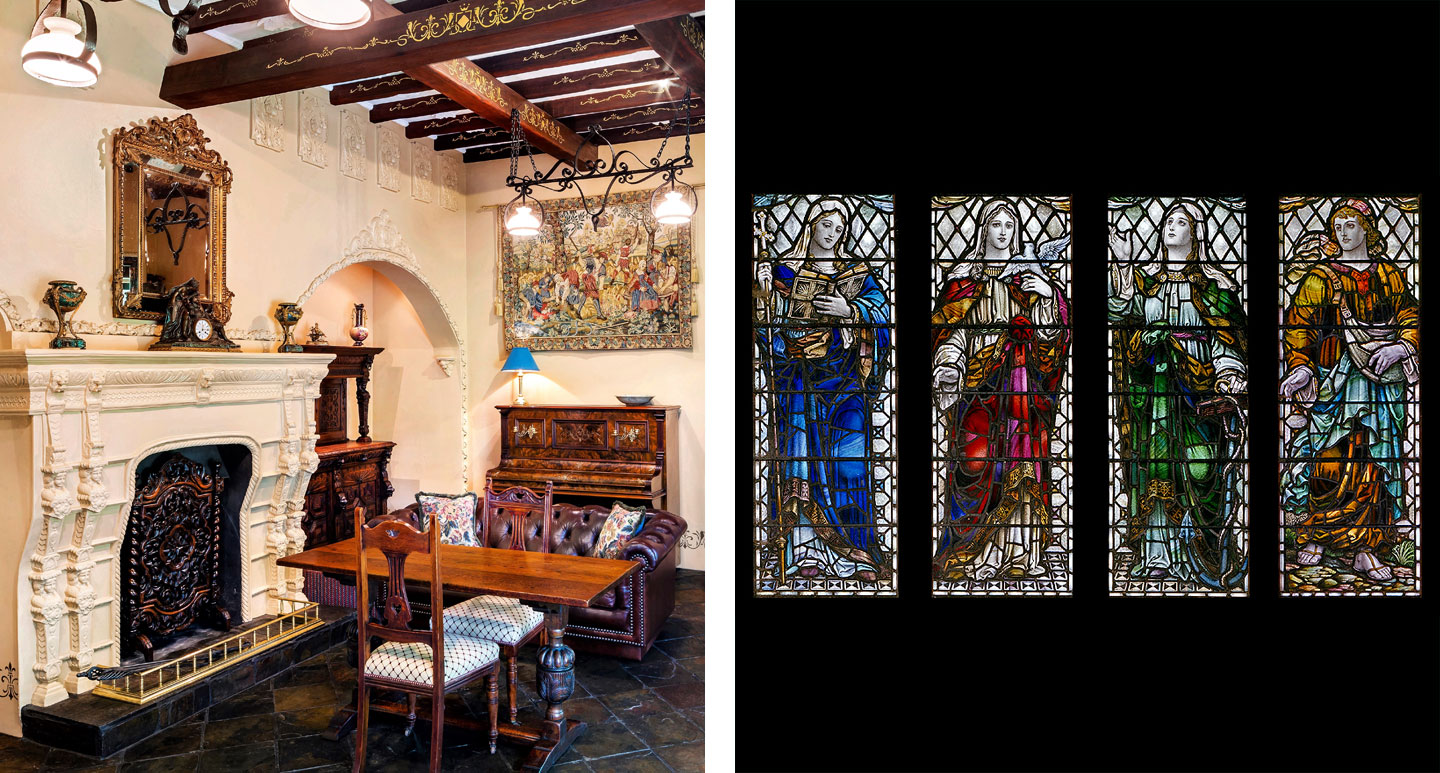 No matter how perfectly tailored, it’s a testament to the owners’ boundless creativity that the interiors are living and breathing, always subject to change as Nydia and Kenneth scour the globe for more items that excite them. The “non-negotiables” are few, and besides Kenneth’s handcrafted creations and the antique beds, they’ll swap out anything they feel necessary.

“It is a slow and time-consuming process,” says Nydia. “The challenge is to find the perfect piece.” Fortunately, Kenneth and Nydia have a few tricks William Morris lacked. They use online resources to the fullest and when they do select something, they often work with a government agency called Artlab that helps them restore and properly conserve the historic items.

Their last import was in 2019, when they bought a French gilded demi-lune table from an antique dealer in Lincolnshire. These days, they’re excited to work a French 1820 silk suspension clock into the mix, one that amazed even the horologist, as well as a silk embroidery from the same year, the restoration of its frame delayed by the closing of the lab as a nonessential business.

Even in the midst of a slowdown by COVID-19, Nydia and Kenneth are not discouraged, instead using the time to complete illustrated booklets about the contents of each suite, filling them with research about each piece and striving as always to enlighten their guests and “expand the experience” of staying in a room at Thorngrove.

Still Standing, and Standing Out

“There is a lot of sameness in boutique accommodation.”

But while evolution is a given, it’s never in service of a trend. When the Lehmanns first opened Thorngrove, their property jutted out like a jagged mountaintop in the flat, bland plateau of the “cookie-cutter” chains. Today, the boutique revolution has remade that landscape — it’s more colorful, more varied, with peaks and valleys to suit any preference.

And still, Thorngrove stands out as much as it ever did. As boutique hotels proliferate around the world, Nydia observes that “there is a lot of sameness in boutique accommodation.” To her point, there are massive boutique hotel mega-chains that are “boutique” only in the sense that they don’t strive for complete inoffensiveness. Even the smaller, more tasteful chains are more and more committed to building a brand that translates across the globe.

Meanwhile, Thorngrove isn’t striving to fulfill a brand. It could never have locations around the world. And it couldn’t be replicated, not even once — not even if you brought William Morris back to life and raised him in Adelaide. Somehow, Thorngrove exists simultaneously as a reaction to both the lack of boutiques of yesterday, as well as to the flurry of them today. It stood out then, and it stands out now. The only explanation is that it’s timeless.