Les Bains Paris stands apart from the crowd. It was once a spa, and then a nightclub, before becoming the luxury boutique hotel it is today. Through its many iterations, one thing has always remained consistent: dazzling success.

There’s an iconic scene in the uber-cool 1964 Jean-Luc Godard film Band à part (known in English as Band of Outsiders) where the three main characters run through the Louvre, dodging museum guards and passing by artwork that spans millennia. It is, in a sense, not too dissimilar from how a guest might experience Les Bains Paris, an impossibly hip hotel with a maverick (and manic) history that stretches across three different centuries.

Since the late 1800s, the legendary Les Bains has drawn both le tout Paris and the crème de la crème of Hollywood. It has played host to the likes of Bowie, Jagger, and Warhol, and been a canvas for young Philippe Starck’s far-out décor. It’s been both a venue for pop-up shows by underground street artists and a place where the early Impressionists came to unwind. It has quite a legacy, and that’s all before it became one of the world’s most exciting hotels.

Its current owner, movie producer and director Jean-Pierre Marois, has a real interest in making sure it stays true to its conception: he’s the son of the man who owned it during its glory years. We spoke with Marois, who helped helped us trace the three-step saga that led to the Les Bains of today.

The adventure begins at the end of the 19th century. François Auguste Guerbois opens Café Guerbois, known today as the famous meeting place of the earliest Impressionists. Imagine Zola, Degas, Renoir, Sisley and Cézanne — known as the Batignolles Group — gathered around Monet, engaged in healthy artistic debate on a café terrace.

This is not Les Bains. It is, however, the springboard from which Mr. Guerbois embarks on another project: creating the most beautiful spa in the capital.

Choosing the heart of Paris’s 3rd arrondissement, the Marais district, Guerbois enlists architect Eugène Ewald to erect a sumptuous stone building. He fills it with hot baths and success is instant: Les Bains Guerbois becomes a Parisian hotspot. Among the misty hot baths’ regulars are men like Proust, the brilliant Batignolles Group, and the rest of the cream of the Belle Époque.

In its next iteration, the prestige of the clientele would not decline.

Here begins Les Bains’ second life, with the same exceptional success. In the 1970s, Jean-Pierre Marois’s father buys the building from the Guerbois family and rents out it out, watching as his tenants transform the dated space into a concert hall coupled with a restaurant and nightclub.

During the heyday of Studio 54 in New York, Les Bains Douches becomes Paris’ own version, representing a revolution in Parisian nightlife.

“Music, punk especially, was the initial gateway to that edgier world,” says Jean-Pierre Marois, who attended concerts there from the age of 15. “That’s what Les Bains was offering. It was more biting, more sulfurous, more radical than anything I had experienced.”

“It taught me a thing or two,” he recalls with a laugh.

Between a private concert by Prince and a dinner with the manager of the Sex Pistols, Marois meets all of his heroes: the Rolling Stones, Joy Division, Jack Nicholson. Meanwhile, fashion icons like Thierry Mugler, John Galliano and Jean Paul Gaultier might share a table in the back as other celebrities float across Philippe Starck’s checkerboard dance floor. Throughout the years, the nightclub draws an embarrassment of A-List names: the aforementioned Warhol and Bowie, plus Catherine Deneuve, Robert De Niro, Sean Penn, Johnny Depp, Kate Moss, Karl Lagerfeld, and on and on…

“The place was both very select and devoted to diversity,” notes Marois. “It was very eclectic. The bouncer, Marie-Line, selected the clientele like a painter on his palette.” Models and media personalities, hip-hop dancers and unknowns — picked for their spirit and style — would weave in and out of the crowd.

By the early 2000s, the club was past its heyday and entering a serious decline. Indeed, the very the structure of the building was under threat, and there was no choice but to close and await the rescue of a major restoration.

In an effort to save the storied club and restaurant, and to preserve the history of the building — in his family now for decades — Jean-Pierre Marois decides to take over. And having already helped turn a little spot in the 11th arrondissement into the internationally praised Gabriel Hotel, he isn’t entirely new to the world of hospitality. He endeavors to turn Les Bains Douches into Les Bains Paris, today’s bohemian, baroque, otherworldly luxury boutique hotel.

Les Bains, with all its history, was “truly a 20th century institution,” explains Marois. “The challenge here was to bring Les Bains into the 21st century.” Marois also knew that he didn’t want to dishonor the trailblazing nature of Les Bains by turning it into a museum piece or making it too mainstream, so he set about launching an architectural competition to reshape the property, deciding in the end that the best proposal is the boldest one.

“I realized at that time the place truly needed a metamorphosis. Only in total freedom could we reinvent it.” 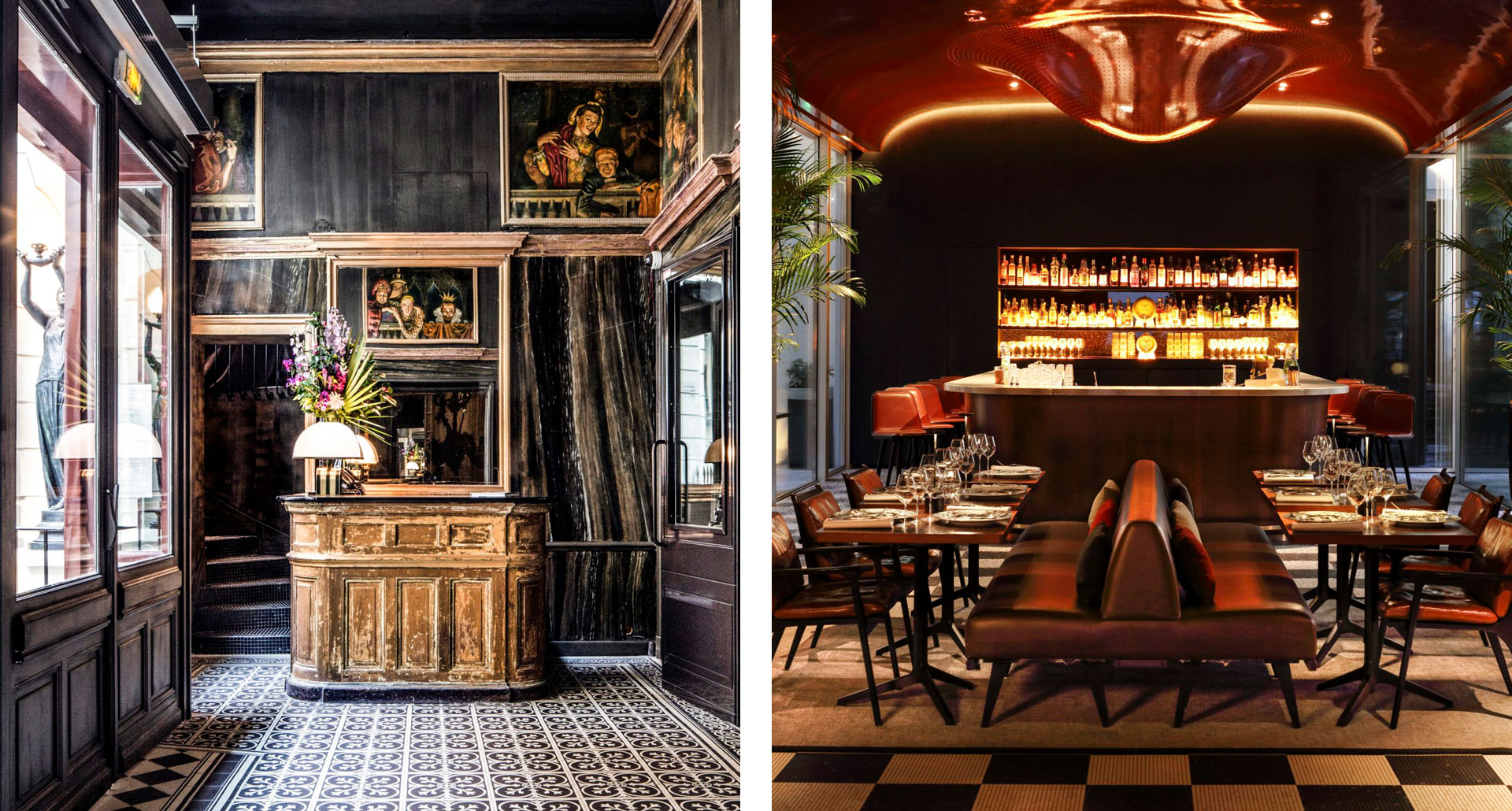 As he would when making a movie, Marois begins his project by surrounding himself with top-tier talent: Vincent Bastie (with some 80 Parisian hotel renovations to his credit) for the architecture. Tristan Auer (Le Crillon, Hôtel du Louvre) and Denis Montel for the interior design. Alexander Kella, from Chateau Marmont, to work on branding, along with an illustrious Japanese florist and a celebrated Michelin-starred chef. Together, they worked to make the hotel tell the kind of sensational story that inspires modern travelers to visit again and again.

While the original hall and Chinese salon have been preserved, the other spaces have all been transformed, each one offering a unique identity, atmosphere and experience. Audacious and spectacular, the Roxo restaurant is halfway between a typical Roaring Twenties lounge and a futuristic vortex, an unlikely combination made possible by the contemporary minimalist wisdom binding it all together. Under the remarkable sculpted ceiling, Brazilian chef Bruno Grossi creates trendy dishes where classics are jazzed up to suit his whims and fancies by the finest flavors from all around the world.

Head to the adjacent bar and you’ll find a bustling social scene and concoctions by the best mixologist in France. The rooms and suites, meanwhile, offer a completely different atmosphere — they’re the 1950s both revived and cut down to the essentials, bright and spacious, distinguished by geometric lines and sparkles of acid colors. 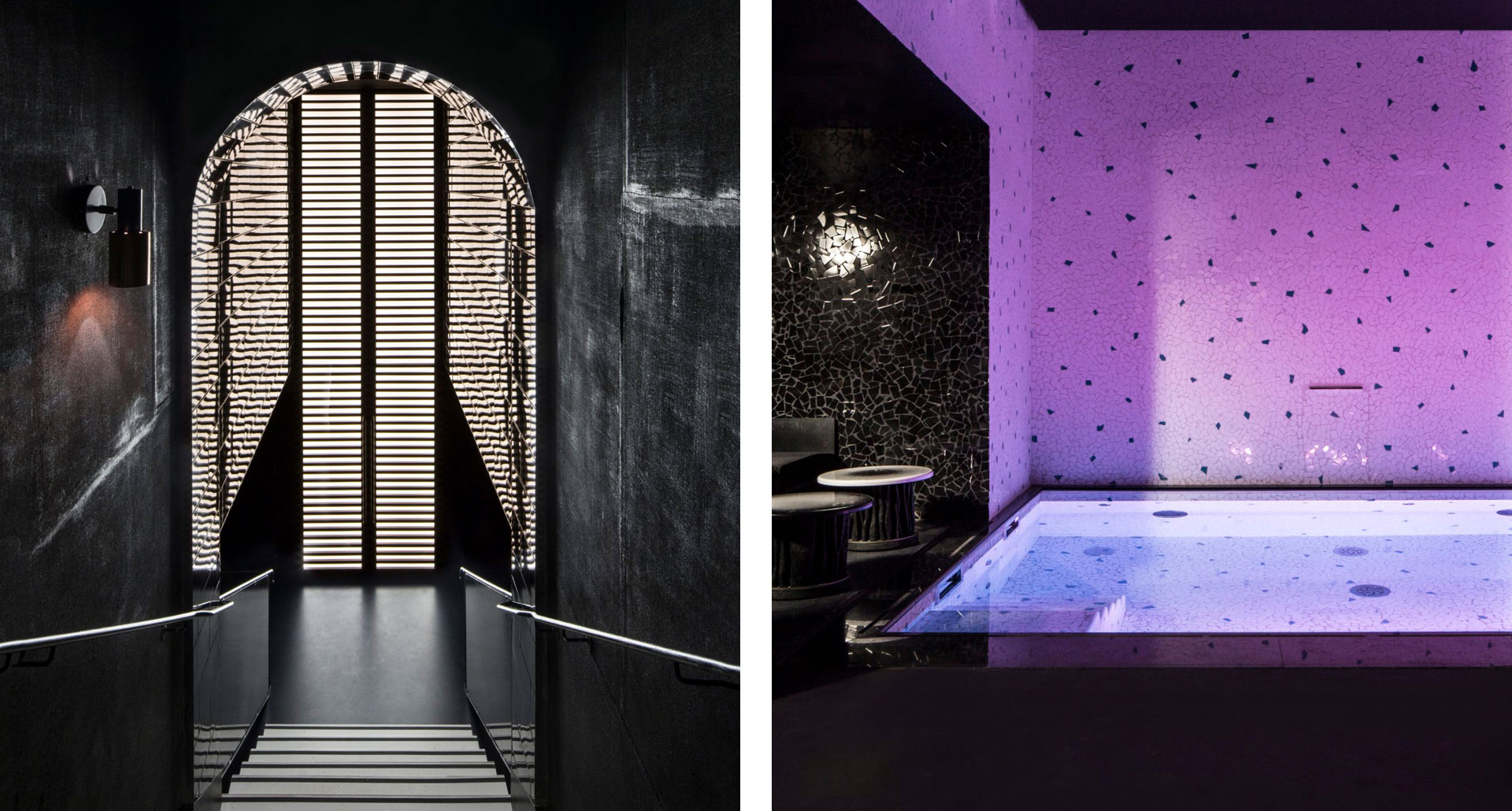 If the era of Les Bains Guerbois and Les Bains Douches seems far away, nods to the site’s history abound. Starck’s memorable dance floor now hosts the restaurant. Rooms are equipped with hammams that evoke the place’s bathhouse roots and, across the street, a hybrid boutique called Les Bains Guerbois sells a collection of body care products and perfumes. The old spa reservoir, a 15-meter-high tower, now contains a private dining room, one of the owner’s favorite nooks and one that summons the 19th-century romanticism of the old Les Bains. “A Jules Vernes-style haven,” says Marois. The festive heart of the place remains, too: there are four to five concerts each week. A music festival, along with regular exhibitions and events, rekindles the flame of its artistic legacy and its illustrious clientele.

It’s a place for people “who wish to invigorate their senses,” sums up Jean-Pierre Marois. And with its history set in three centuries, yes, it’s perhaps also a little for those who feel nostalgic for the good old days. Or as it says on a wall at the legendary Les Bains Paris, in reference to the works of Marcel Proust, “le temps perdu retrouvé.” 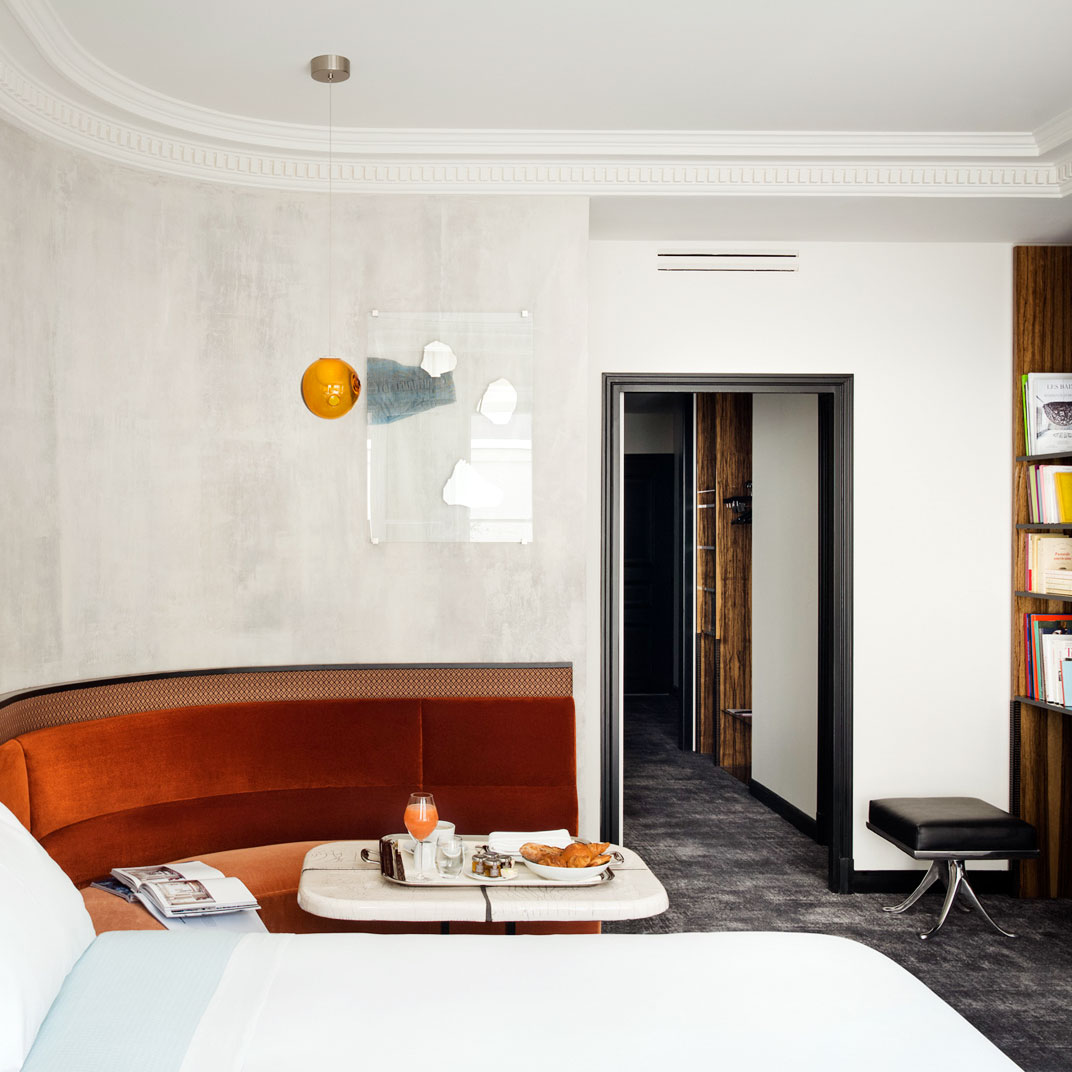 When it’s time again to travel, if you’re considering a trip to Paris, be sure to consider staying at hotel Les Bains Paris, located in the 3rd Arrondissement (Le Marais).