Rebecca Schönheit, Tablet’s German writer, had a big wedding planned for April. Because of the coronavirus, her plans changed.

I was in seventh heaven. We had gotten engaged at Christmas and by January had started to plan the wedding. We got the paperwork together, arranged the date with the church, bought and engraved the rings, and sent out the invitations. And of course, I had already gone out to try on dresses and find shoes — all the things you look forward to as a bride. Now all we had to do was wait and look forward to the big day.

We live in Berlin, but as we grew up in different parts of Germany, and both spent time living and studying abroad, we knew the guests would be a mix of people — the ideal ingredient for a successful party. And we knew we wanted a big party. Our plan was to get married at the end of April before everyone went away for their May holidays, before the deluge of summer weddings began.

But as March began, our joy was increasingly clouded by events surrounding COVID-19. Every day, the situation became more serious. And the prospect of a glittering celebration, with so many people — children and elderly, friends from all over the country, friends who worked in health care — became more and more unrealistic. The prospect of having to cancel this wonderfully planned party made us incredibly sad. But even sadder was the idea that the marriage itself might not happen anytime soon.

On March 16, we finally decided to ask the registry office how long they thought they would be operational, and if our wedding ceremony in April was still realistic. The registrar informed us: “We do not intend to close. But you never know… If you want to be on the safe side and be spontaneous, come by tomorrow at noon. We’ll have you married in no time. We’ve got all the papers right here.”

Are we spontaneous? YES! So the wedding was set: March 17, during lunch break.

My outfit didn’t quite match my expectations, but at least the weather exceeded it. After we went to work in the morning, we arrived at the registry office shortly before noon in bright sunshine. The registry office was empty. Nobody standing in front waiting — it was a strange picture. After we rang the bell, we were let in and greeted with the appropriate distance. The registrars were thrilled with our spontaneous decision, and tried to make up for the missing guests with the sheer quantity of photos they took. Just as quickly as they took them, we shared them with our friends and families, who we could picture sitting excitedly on their phones sharing the moment with us.

After we had exchanged the rings (unbothered by the erroneous date in the engraving), the registrar allowed us to kiss with a wink. “I’d better stay behind the desk so I don’t hug you by mistake,” she apologized, all while taking more photos. 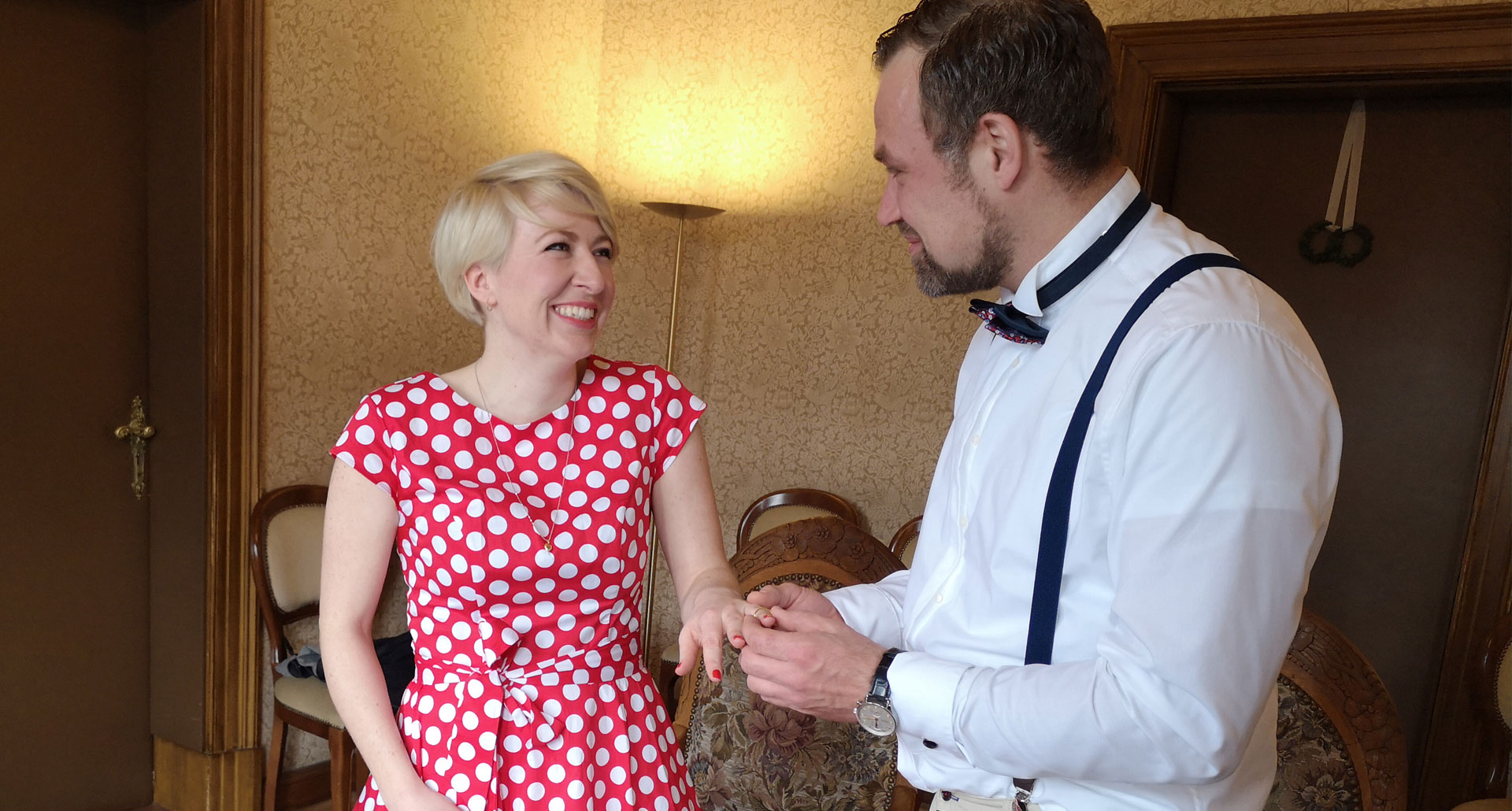 After the ceremony we went out to dinner, toasting with Aperol Spritz and for just a moment feeling that we were on a romantic date in Italy. Because the sun was shining, and we were sitting outside with plenty of distance to the other tables, it almost felt as if it was just the two of us in the whole world. A mini-honeymoon in the middle of Berlin on a Tuesday afternoon — there are worse scenarios.

But another highlight was scheduled for the evening: a video conference with all our wedding guests. We were to meet at 7:00 p.m., in front of the computer, for a toast. We got ready, opened a bottle of champagne, and positioned ourselves in front of the camera.

Little by little, more and more people joined in: some had dressed up, some decorated their rooms with “just married” flags, some fed their babies, others sat in quarantine on the balcony of their hotel. Still others were sick in bed. But all of them had a drink in their hands, and all of them joined us for a virtual toast. Seldom have I experienced such happiness as I did during these minutes.

Having so many people in the conference, a conversation was quite impossible. But just the fact that so many people can feel so close to each other, despite so many kilometers of distance, to share such a wonderful moment, moved me to tears. 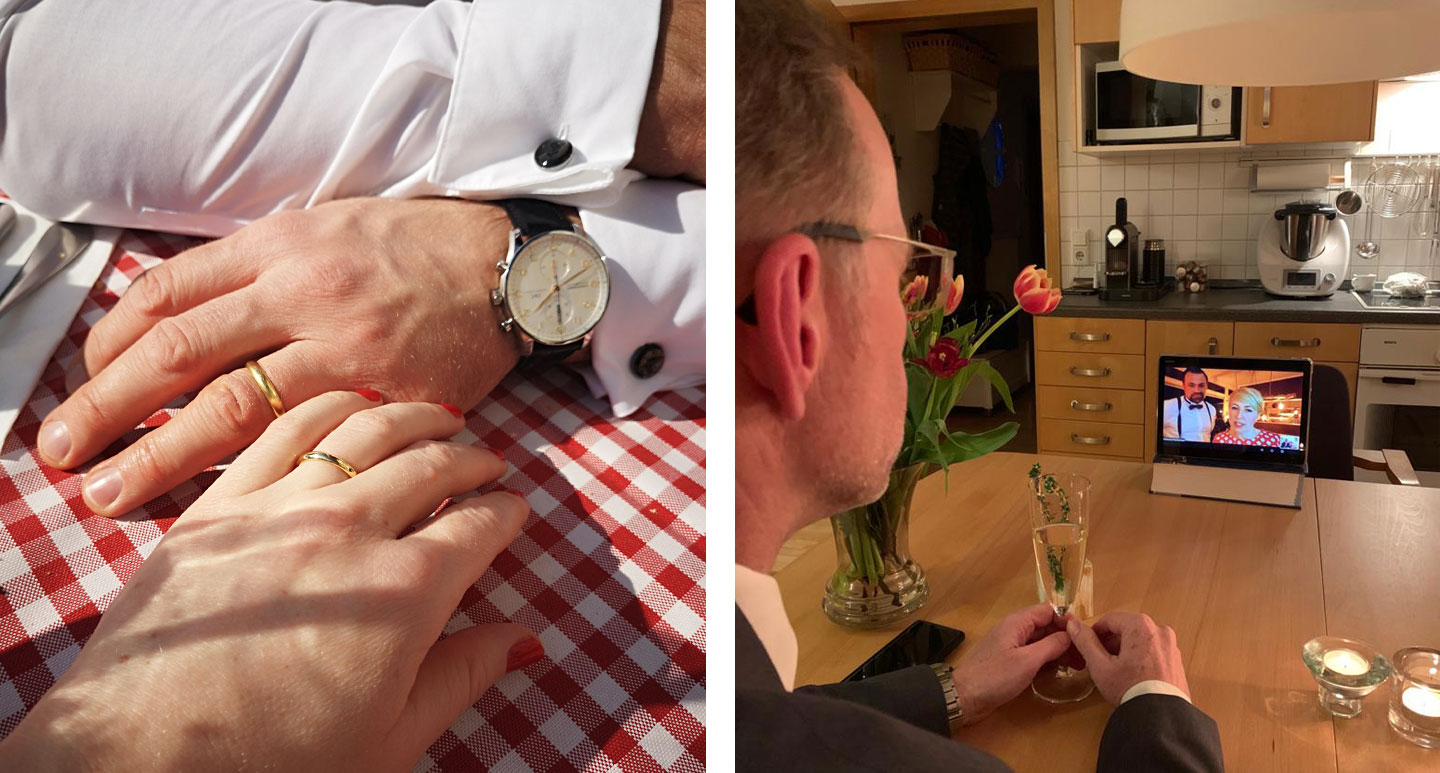 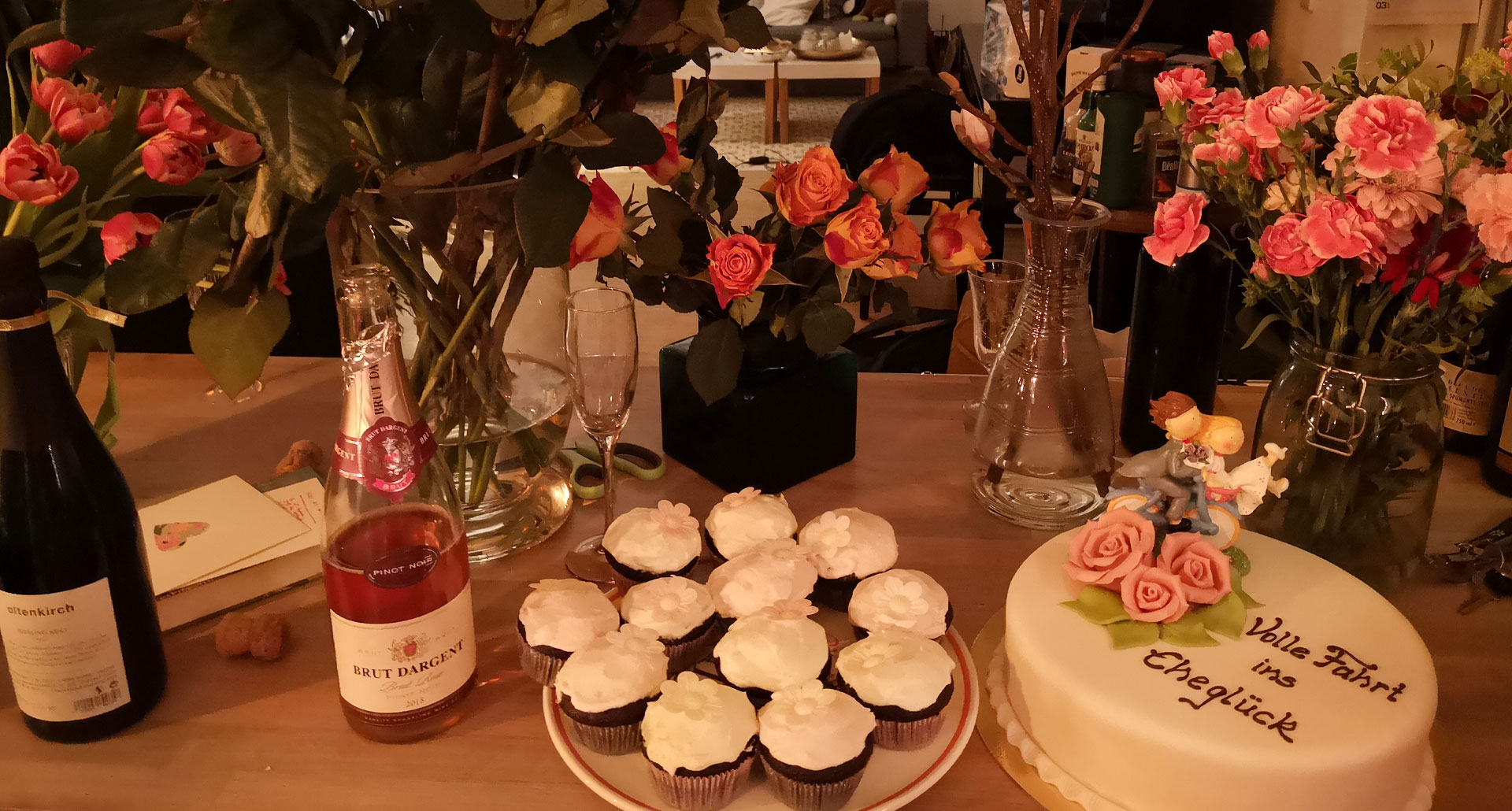 Of course, I would have been happy with real hugs and the clinking of glasses and the conversation with family and friends in the same room, but sometimes you have to accept limitations. Because of the video transmission and the photos and phone calls throughout the day, I didn’t feel like we were celebrating alone. The requirement to minimize your social contacts as much as possible didn’t feel so much like a restriction, as long as you interpreted it the right way. It’s not about barring you from sharing your life or talking to each other. All it’s about is being in separate rooms — and what better era for that than this one, in the time of cameras, mobile phones, and video calls?

I still hope that we can still celebrate properly, that I can wear my dress and hug my family. But until then, I am grateful. I am grateful for the fact that the registrars did their jobs with so much love and enthusiasm; grateful that my friends and family did end up joining us; and of course, grateful for the man at my side, who is now my husband in the midst of all the chaos.