Saltwater pools are becoming a popular amenity at hotels all over the world. Compared to traditional pools, they’re friendlier to the environment, healthier to splash about in, and more sustainable in terms of maintenance and cost.

The initial outlay for a saltwater pool can be more expensive than what’s required for its chlorine-soaked cousin, but no longer needing to store and interact with pungent chemicals can lead to long-term savings and reduced liability. The salinity of a saltwater pool is about one-tenth that of ocean water, so it won’t make you more buoyant, but the water will feel softer, silkier, and be less harsh on clothes, eyes, and lungs than the water in chlorinated pools.

That’s not to say saltwater pools lack chlorine entirely — the element is still necessary to kill germs and contaminants, but it’s generated from the salt itself and present in significantly lower doses… wait, wait, hold up. You didn’t come here for a Wikipedia entry on saltwater pools, did you? A few of you, we assume, came here to see some of the coolest hotels with saltwater pools in the Tablet selection.

You’ll find fifteen of them below. 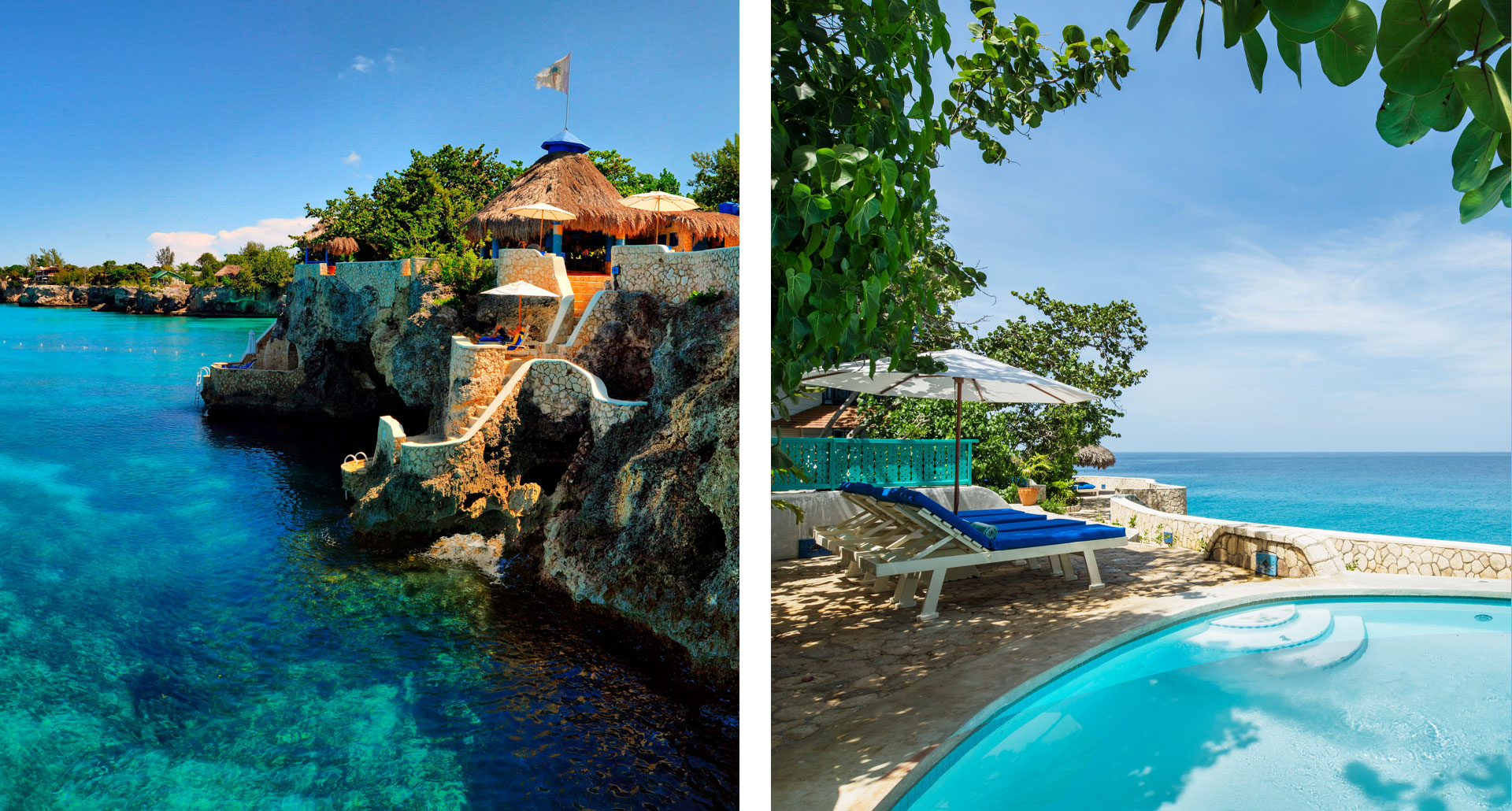 The Caves is a collection of twelve private cottages atop a cliff, overlooking the ocean, with plenty of jumping-off points to impress one’s companion and other guests. For those with a beach fetish, consider this: the sea looks better from higher up, and at The Caves it becomes your own private pool. Below, in the cliffside, are natural volcanic caves and grottos which can be explored whilst swimming, or set up for private candlelight dinners. 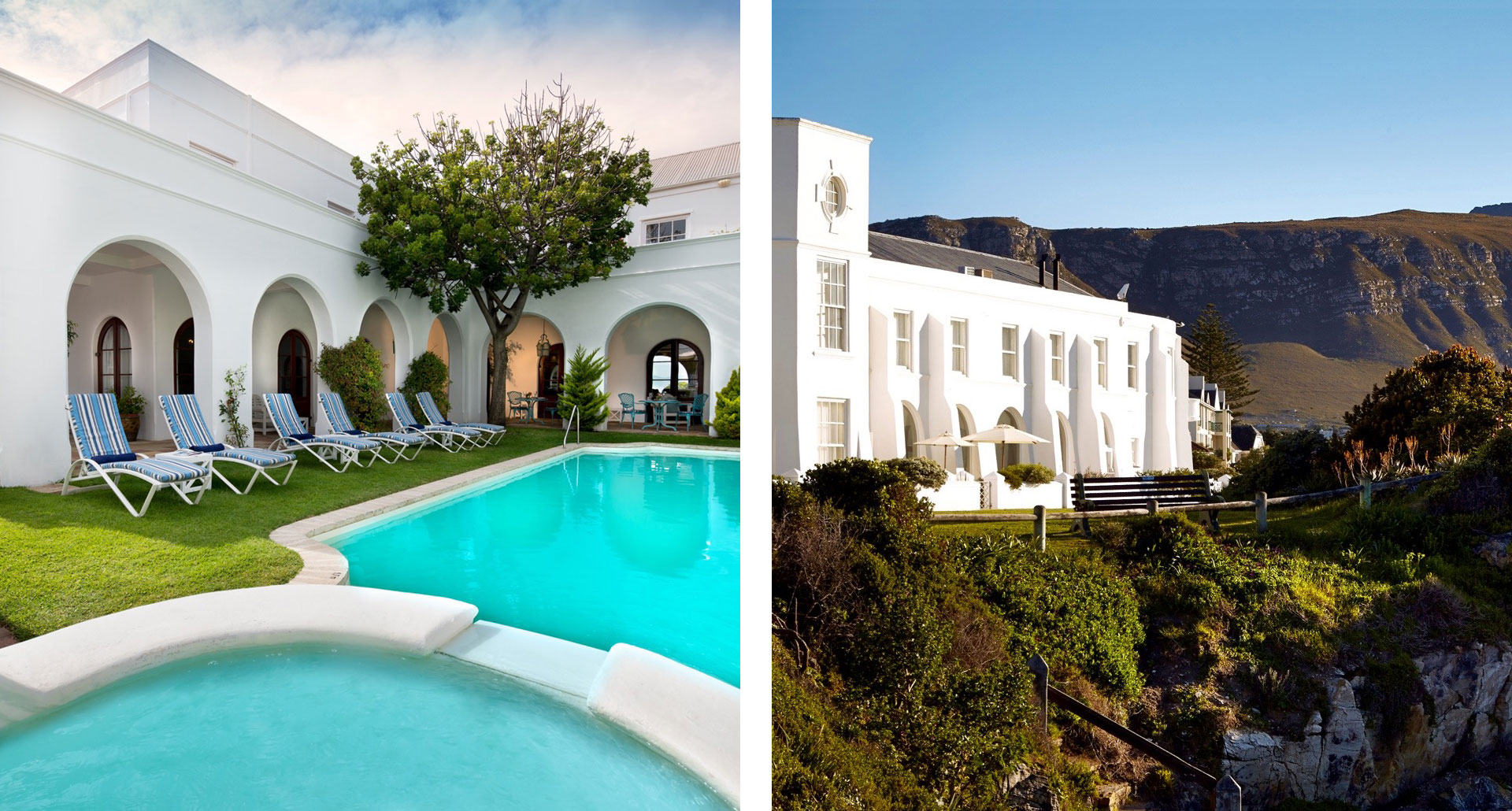 More than a few seaside resorts offer whale watching excursions. But at the Marine Hermanus, with its stunning clifftop location overlooking Walker Bay, guests need not leave their rooms to watch the spectacle. This stretch of the southern coast of South Africa is a natural playground for the Southern Right Whales that breach near the shore from July to November — right in front of the Marine, a 45-room resort built at the turn of the century and restored in 1998. 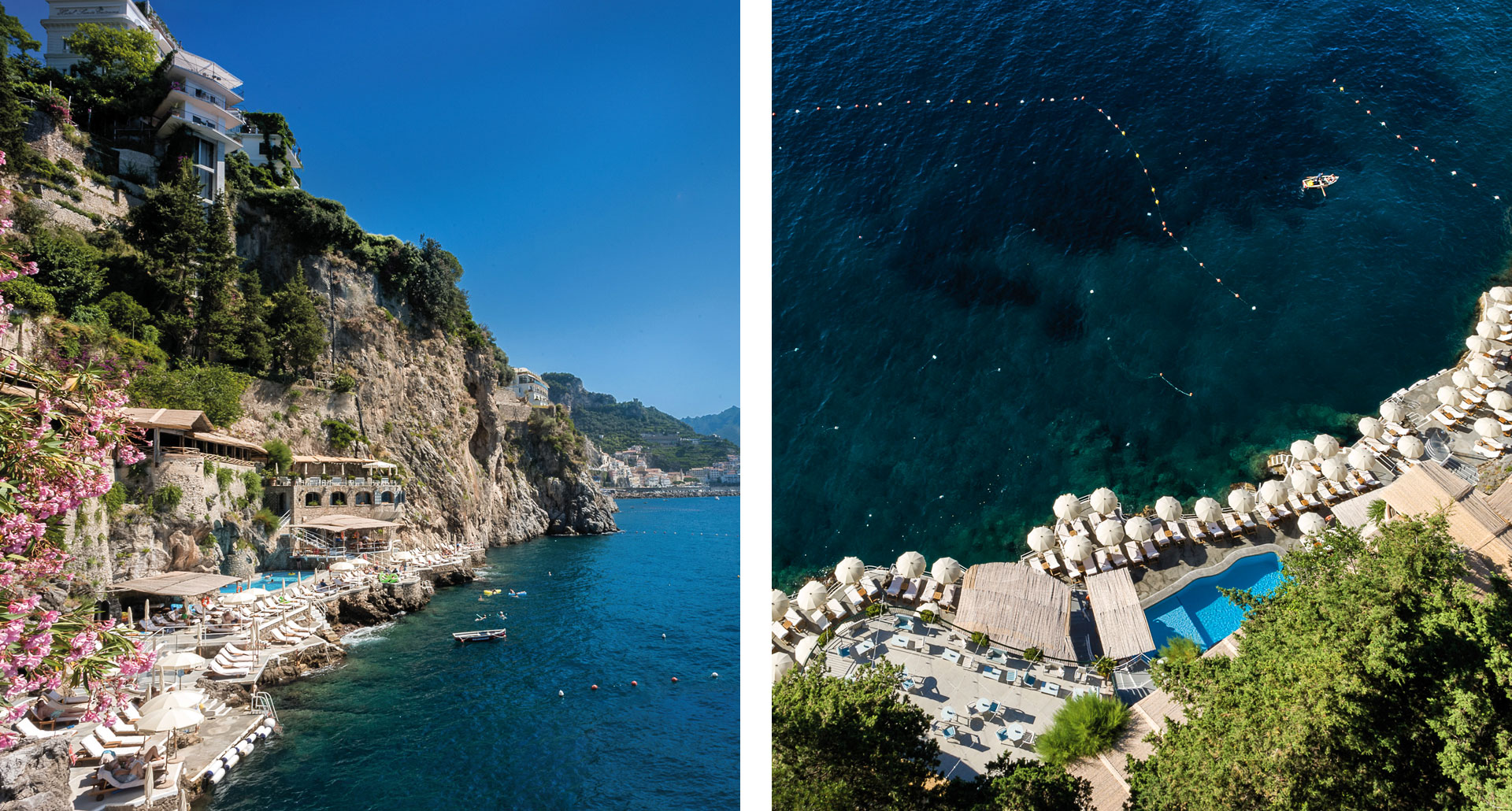 Santa Caterina is the real deal: the grounds are all terraces, olive groves and lemon orchards, with the kind of jaw-dropping views that make the Amalfi Coast one of the world’s most special places. Family-owned for the better part of a century, it sits high on a hillside facing the sea and the town of Amalfi — guests ride an elevator down to the hotel’s private beach, for the ultimate storybook Italian-coast experience. 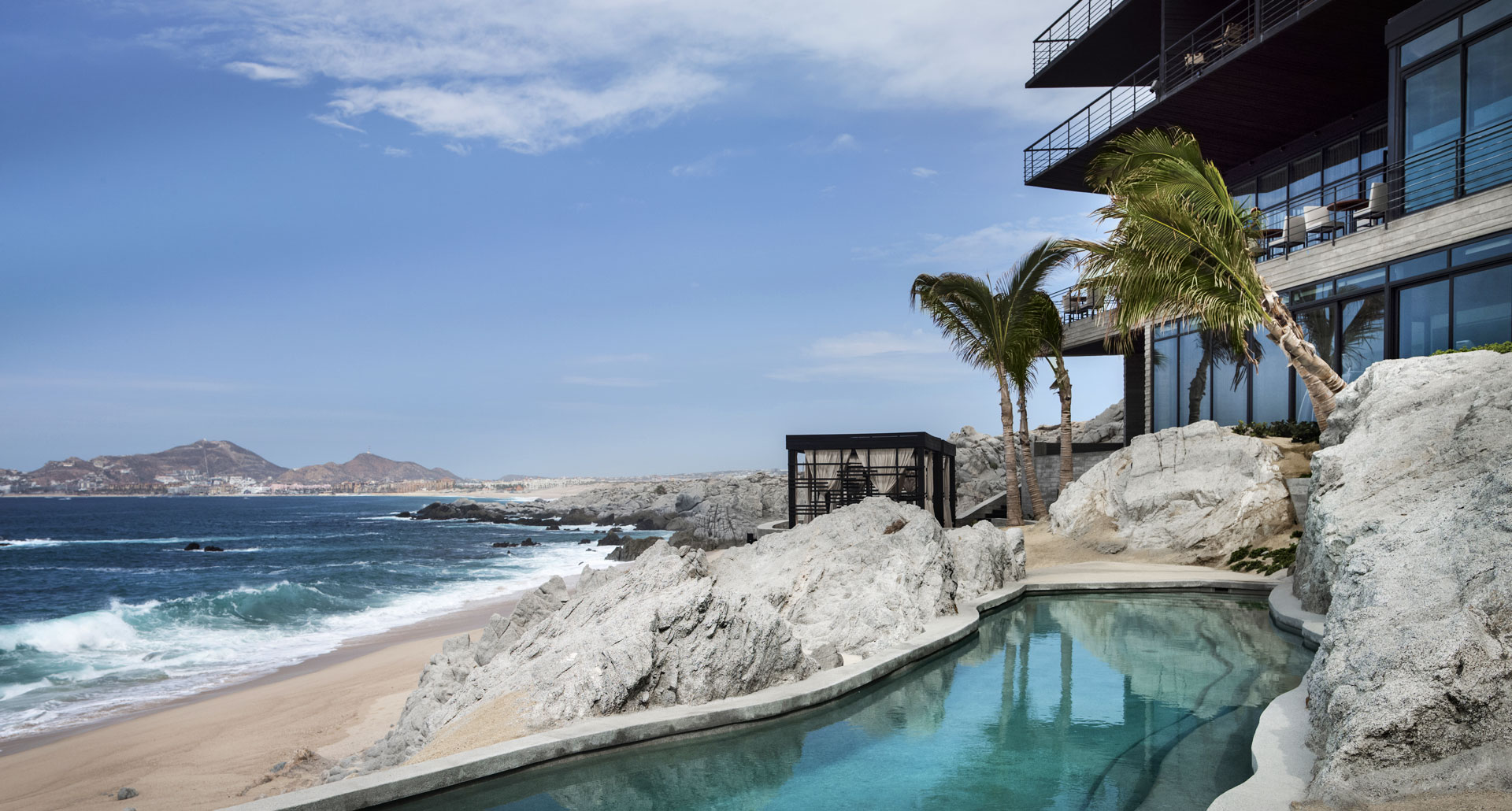 “The Cape, a Thompson Hotel” is the sort of name that pretty well sums the place up — if you know that the cape in question is Cabo San Lucas, and if you’re acquainted with Thompson’s brand of luxury boutique hospitality, then you more or less know what to expect. The hotel is blessed with a first-rate location, right on Monuments Beach, with views of the famous Arch across the bay, and a design that blends a hand-crafted local look with a bit of a SoCal modernist vibe. 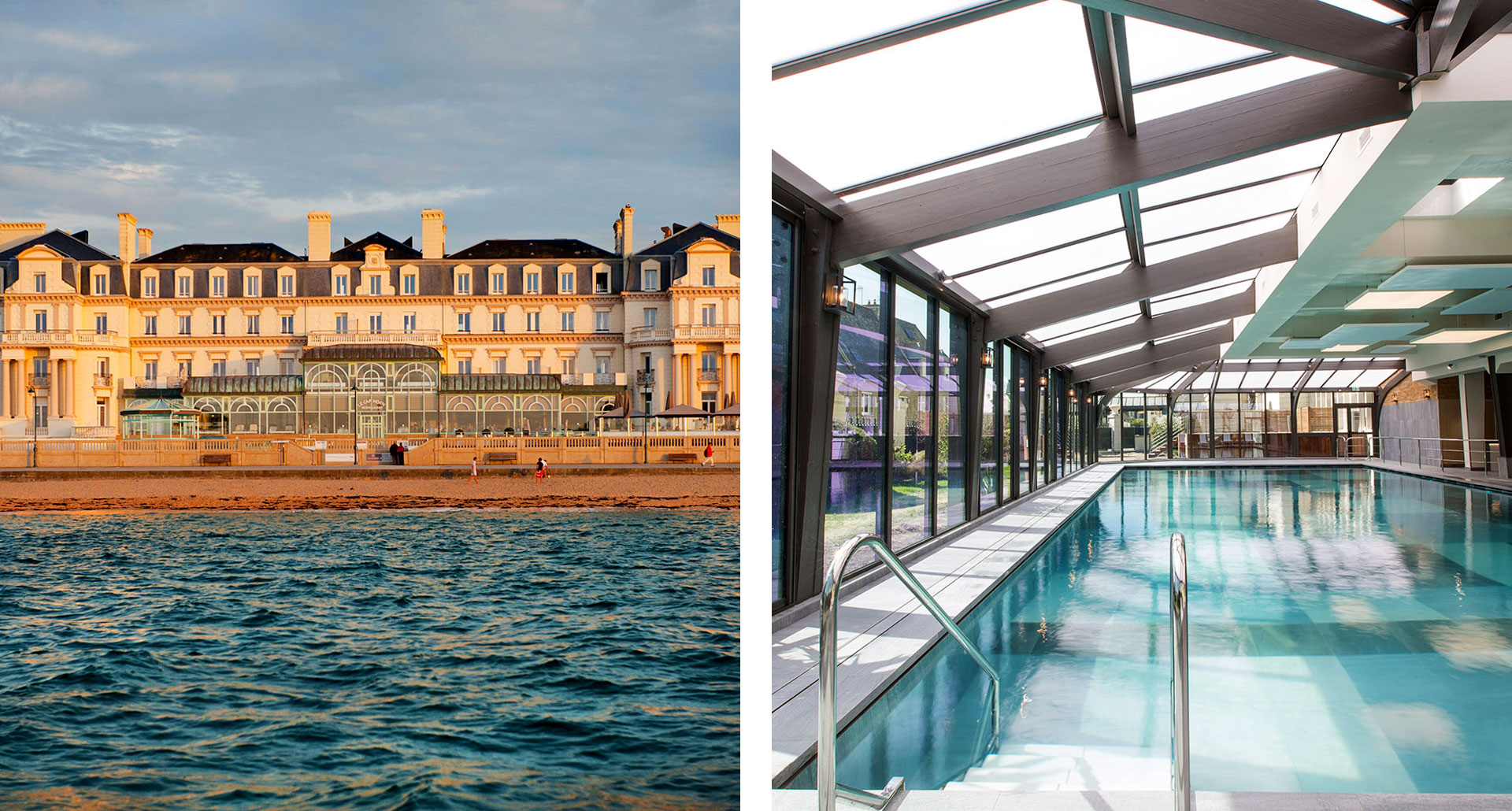 At first glance, the Grand Hôtel des Thermes is the archetypal French seaside luxury hotel — an impressive Belle Époque edifice fronting a long stretch of beach. But unlike the grand hotels of the Côte d’Azur, this one’s got no oceanfront boulevard, no built-up beach club, nothing but sand and sea. This is the Atlantic coast of Brittany, a classic destination that’s nevertheless avoided the fate of a place like Cannes — which means it still feels like a proper escape. 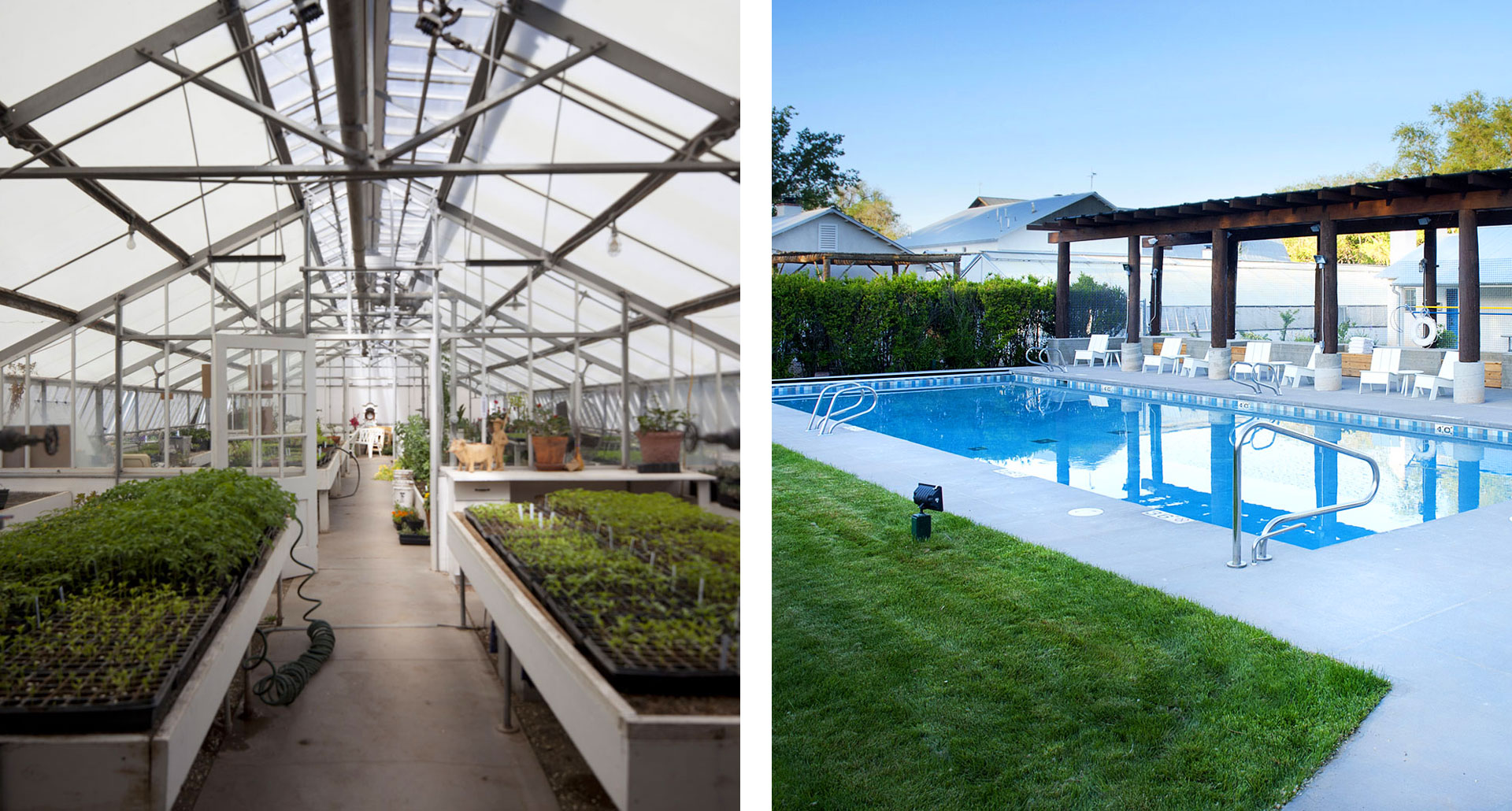 Organic shampoo, hand-milled honey soap, complimentary earplugs. Wait, what? Don’t worry, it’s not the pulsing beats of a nightclub below that might interrupt your sleep — it’s the peacocks. The fabulously decorative birds, infamous for their early morning call, are just some of the exotic creatures that wander the grounds of Los Poblanos. The wildlife is part of the charm: Los Poblanos, located outside of Albuquerque, isn’t just a hotel. It’s also a working ranch. 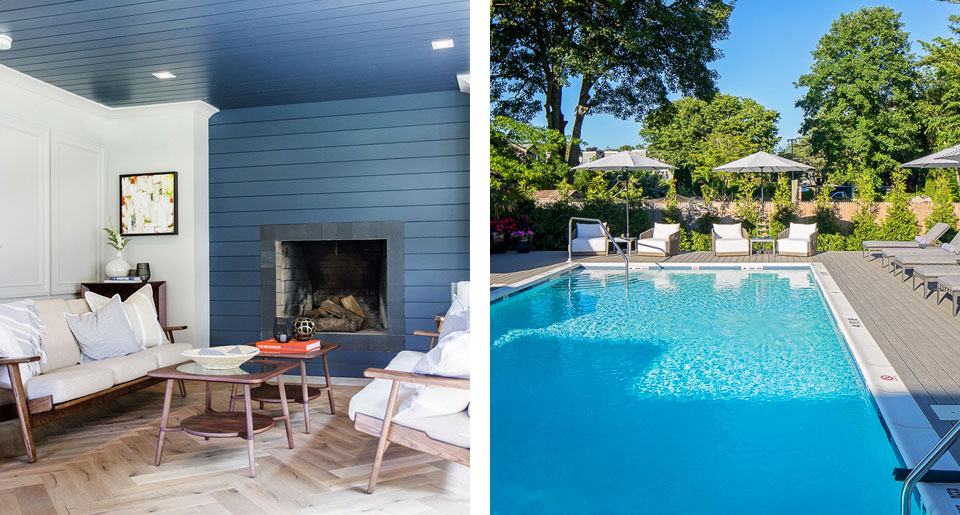 Montauk may be where most of the action is in today’s Long Island boutique-hotel scene, but we get the feeling that suits Journey East Hampton just fine. This is a hotel that’s less about chasing the next nightlife hot spot and more about providing an elegant escape for a clientele that’s more interested in a proper, private getaway — one that’s as cozy as it is stylish, and one where the experience is tailored to the guest, thanks to some thoughtfully personalized service. 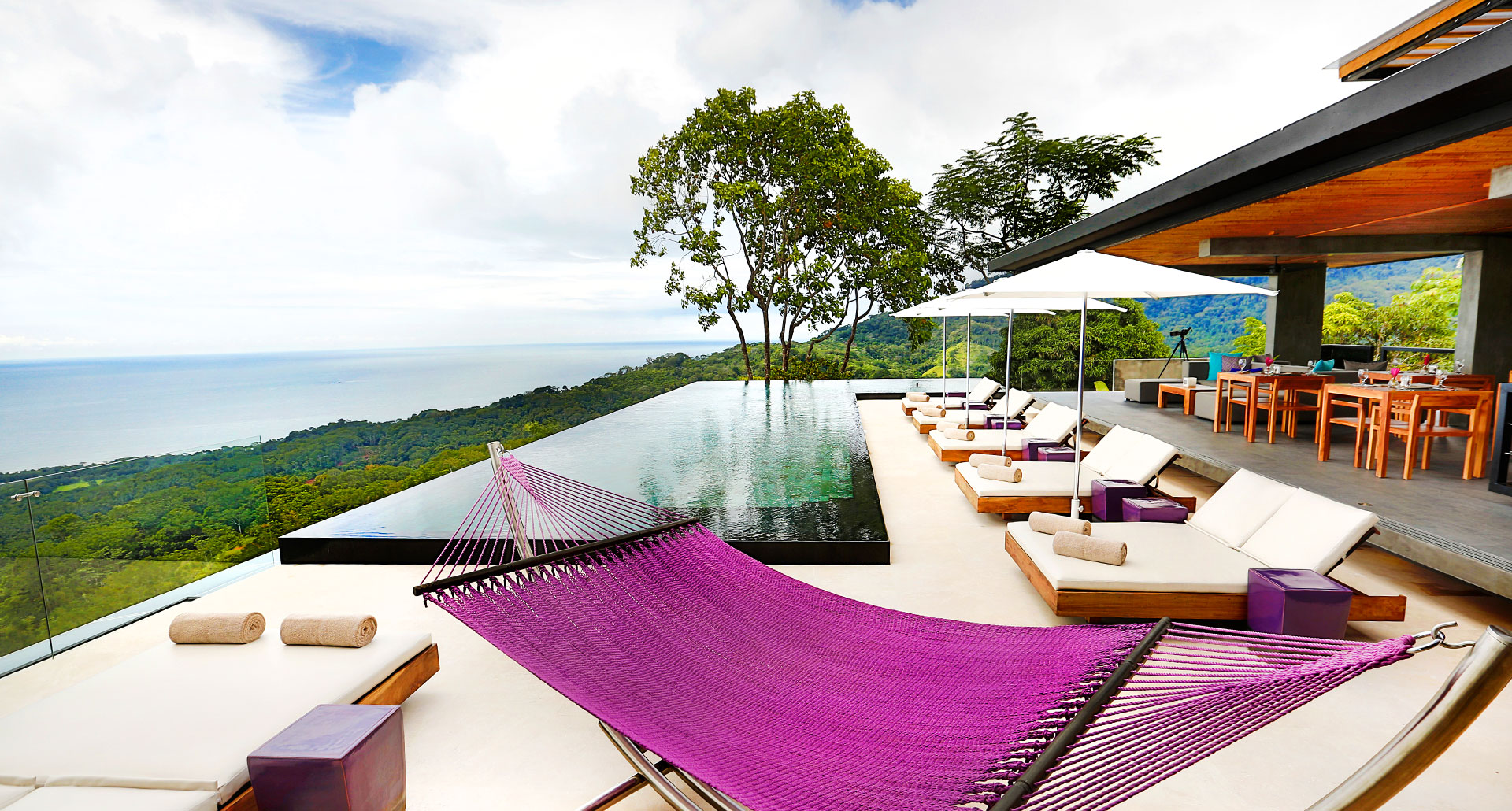 This boutique hotel on Costa Rica’s central Pacific coast is for adults only. Consider yourself warned: Kura’s minimalist jungle villas have a seriously seductive edge. The custom-built glass-encased rain showers, big enough for two, aren’t tucked away in the en suite bathrooms, but provocatively positioned within the open-plan living areas. Each villa also features a private terrace with a double hammock, a custom-designed “floating bed” — it sounds romantic, and it is. 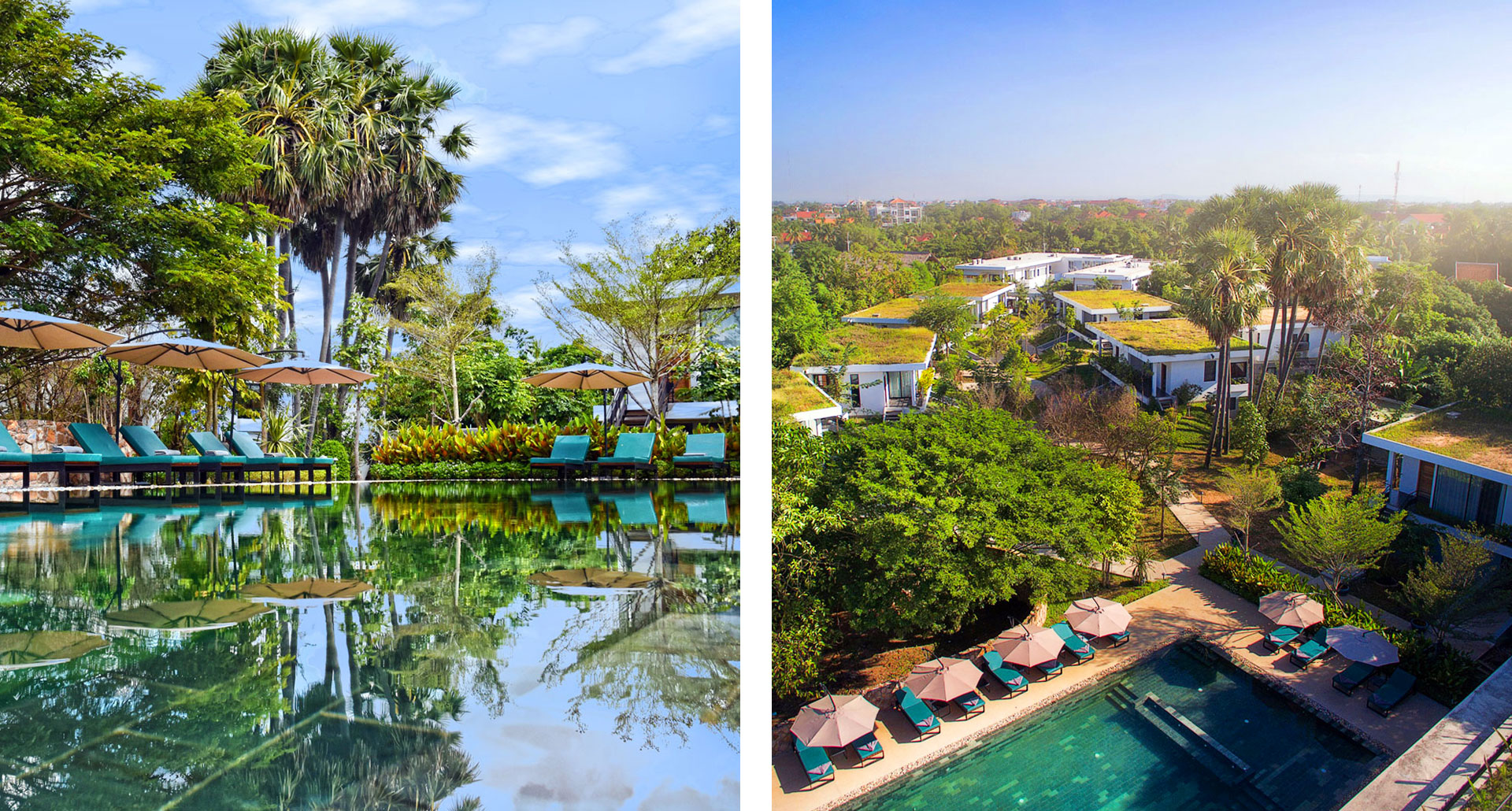 Siem Reap is the sort of place where it’s entirely possible to have a tranquil, practically pastoral stay well within the city limits. Hillocks Hotel & Spa is a case in point. Though it’s close to the city center, just a few minutes from the famous night markets, the hotel’s compound is low-slung, planted with gardens and trees, and could easily pass for a country estate. The modernist-Khmer villas are classic examples of contemporary high-end Asian resort living. 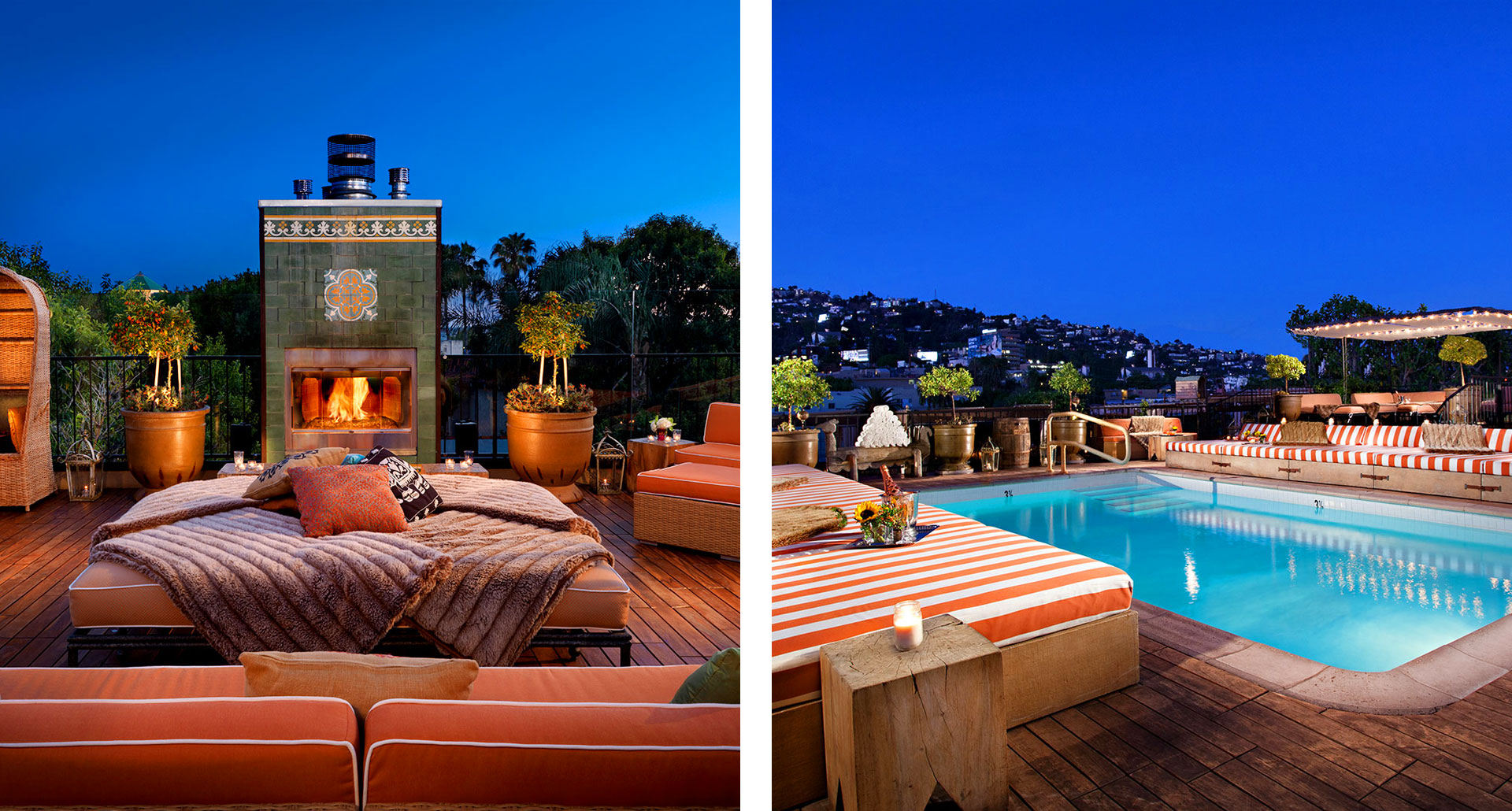 The Petit Ermitage isn’t named for just any old hermitage. Here in the heart of West Hollywood is a boutique hotel that doubles as a tribute to Catherine the Great’s Hermitage Museum in St. Petersburg. It’s pitched at the neo-bohemian crowd, rather than the aristocracy — West Hollywood is for a more artistic crowd, one that’ll appreciate the layers of irony involved in a California hotel that’s an homage to a 19th-century Russian version of Venice. 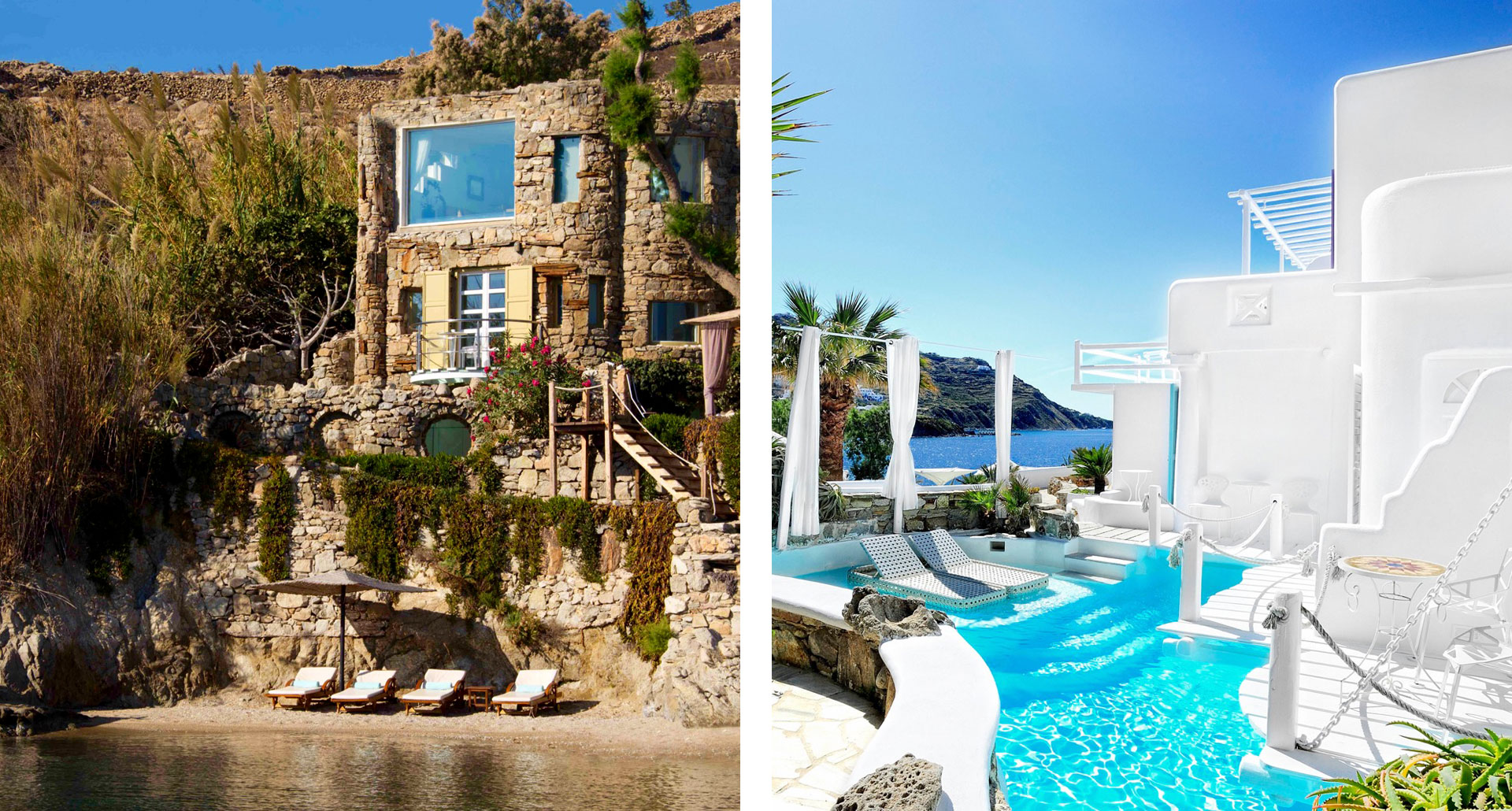 Kivotos Mykonos winds along terraced paths down the hillside, meaning most of the expansive rooms come with sea views. All are handsome, quietly contemporary, decorated with a smattering of antiques and local artworks, and though they feel private they’re anything but remote: attentive staffers are never far away. Nor are the four swimming pools (choose between fresh- or salt-water, piped-in music or not), looking out over the improbably blue waters of the Bay of Ornos. 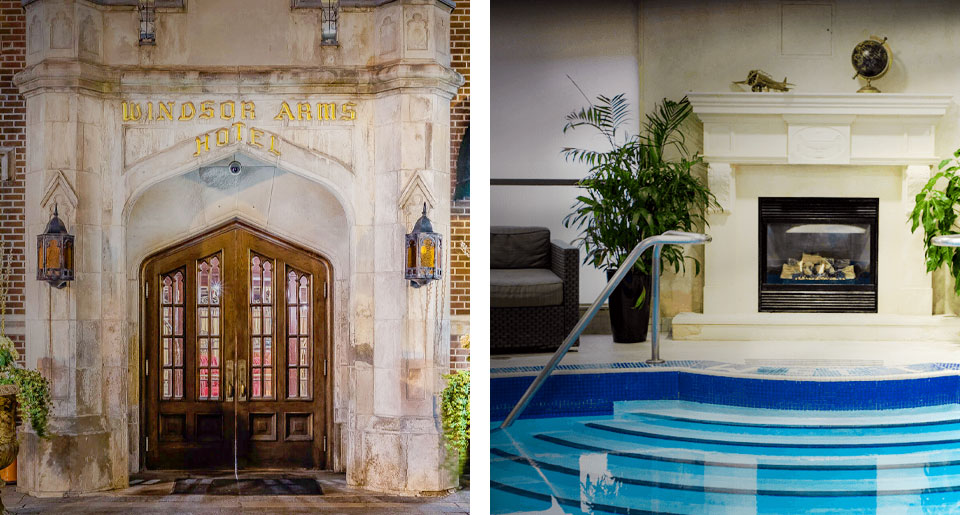 Behind the 1927 neo-Gothic facade of the Windsor Arms is a delightfully modern hotel, completely redesigned in a sort of luxe-minimalist style, yet with an emphasis on old-world service. The intimate scale and discreet professionalism of the Windsor, and niceties like 24-hour butler service and Bentley car service, have combined to make this hotel practically the official lodging of the Toronto International Film Festival. 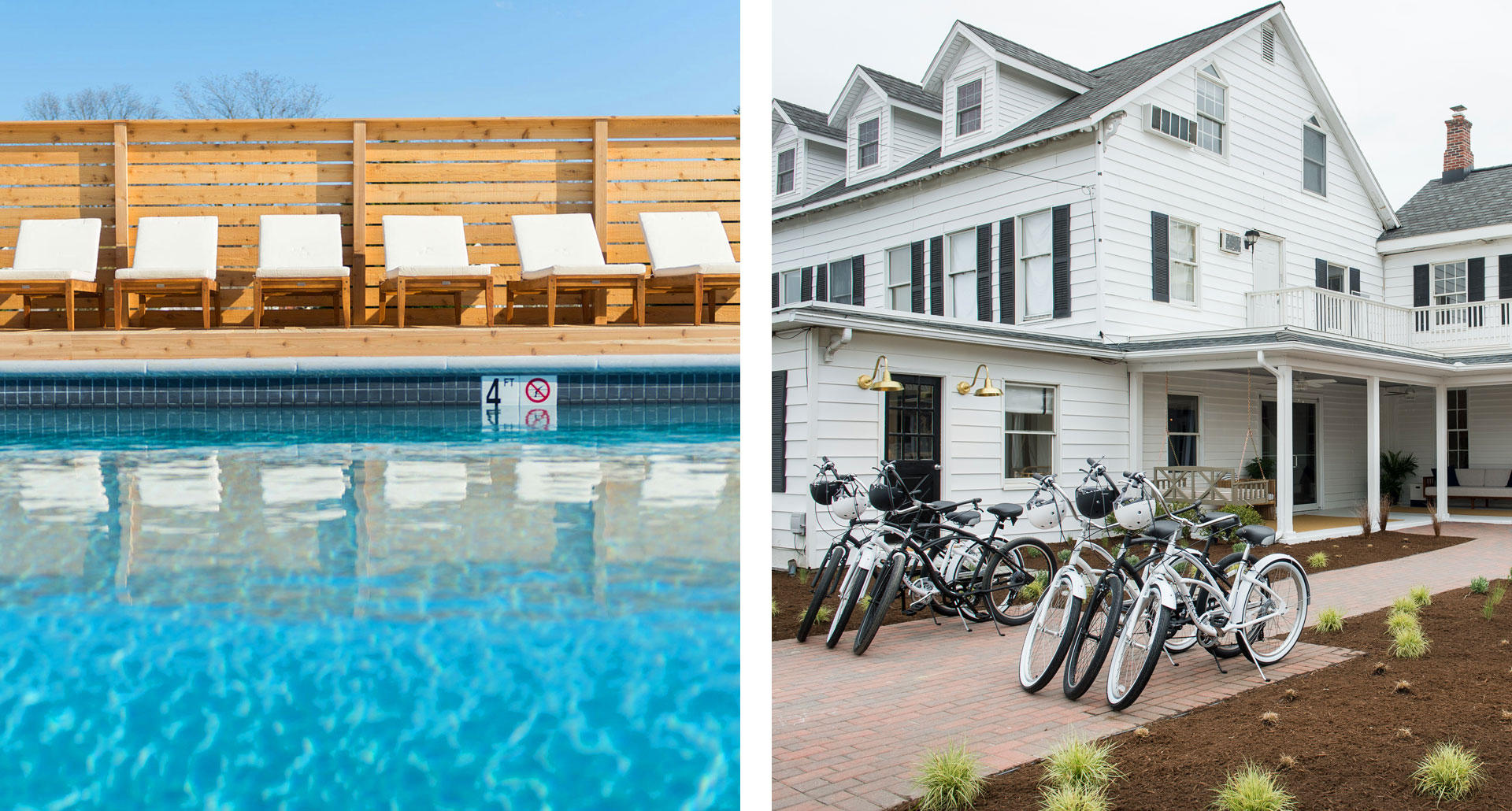 This 1898-vintage boarding house on Maryland’s Eastern Shore has been thoroughly updated, its rooms and suites redesigned in a contemporary-classic style. Maritime colors and materials — wood and brass, sisal and rattan — reinforce the connection to the Chesapeake Bay seafaring life, while the comforts are pure modern luxury: Egyptian cotton linens, in-room spa services, and tablet-based concierge service. 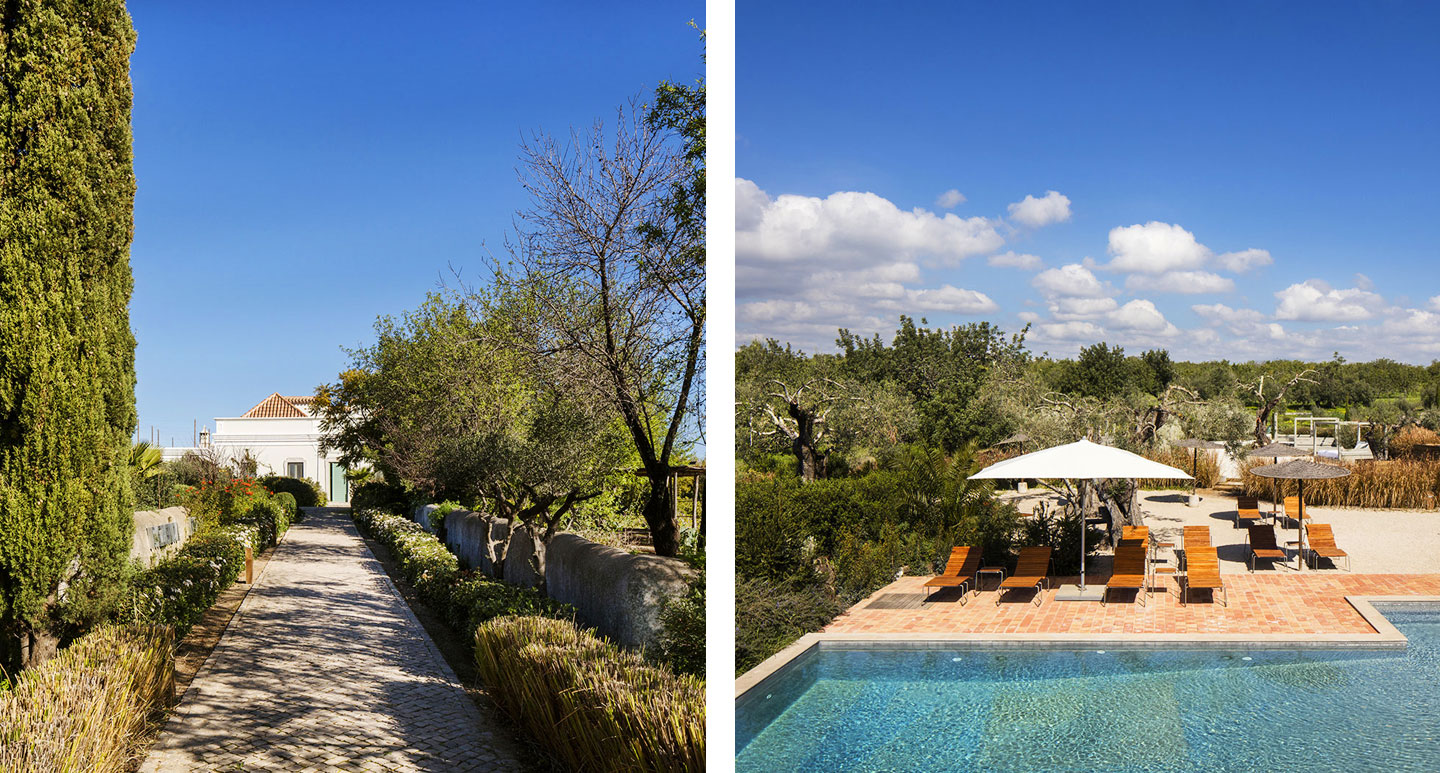 If Fazenda Nova, a 15-room hideaway in the eastern Algarve, feels more like a classic British country house than a modern Portuguese design hotel, there’s a perfectly sensible explanation: that’s exactly what its English owners intended. This lovely 19th-century house sits on an estate planted with orchards, vineyards, and vegetable gardens, all of which figure prominently in the kitchen’s cooking. Still, you shouldn’t expect a period piece. 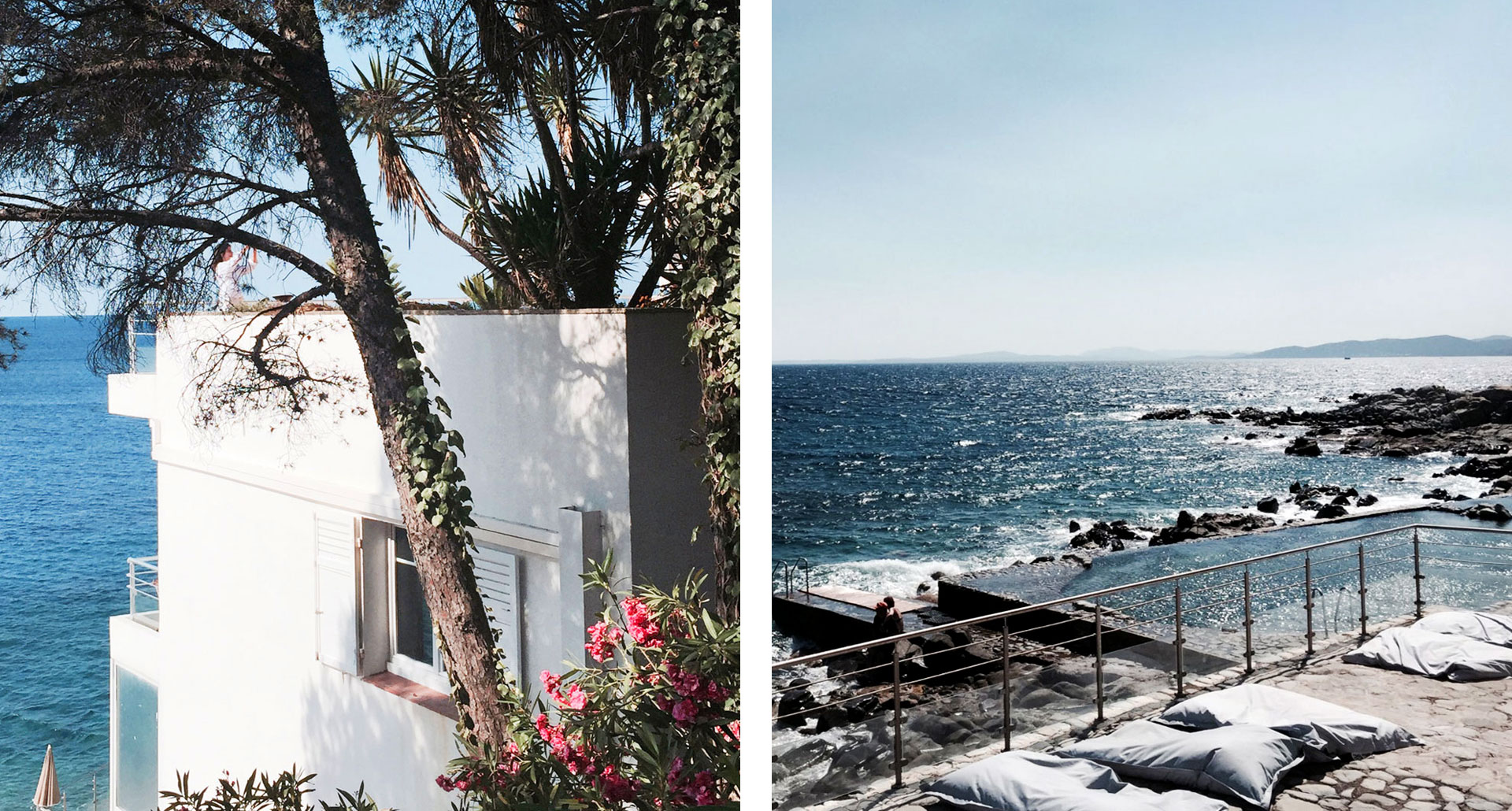 Before the casinos and the Cannes Film Festival, before the French New Wave, before Brigitte Bardot rolled around on the sand in And God Created Woman, the Côte d’Azur was a place of respite. It still is, in spots. Take Saint-Raphaël, an old fishing village turned seaside resort. It’s located midway between Cannes and Saint-Tropez, on a stretch of coastline known for its red rocky cliffs, tiny coves, and quiet beaches. It’s here that you’ll find Hôtel Les Roches Rouges.