As Puerto Rico continues to recover from Hurricane Maria and a disastrous federal response in the storm’s aftermath, help has come from an unlikely source: the island’s first luxury hotel.

The first thing you see as you step into the lobby of the Condado Vanderbilt Hotel is the ocean. The foyer, flanked by a curving Art Deco staircase, looks through a sunken bar to a huge picture window from which waves crashing against the seawall are visible day and night.

But two years ago, the window would have looked out onto a much more frightening scene. Hurricane Maria made landfall in Puerto Rico in September 2017. The violent storm had already devastated several nearby Caribbean islands, most notably Dominica, where it destroyed the very infrastructure of the country; roads were washed away, farms obliterated, and the phone and electrical grids wiped out, cutting off all communication with the rest of the world. By the time Maria reached Puerto Rico, we were all too aware of her power.

Many of those who had the resources to flee did so, but even more Puerto Ricans decided — or were forced — to stay where they were. As the death toll rose, many watched in horror at what they saw as the U.S. government’s inadequate response to the tragedy: millions of dollars in recovery funds were diverted or not spent at all; Spanish-speaking aid workers were in short supply; and contracts for restoration of basic services like electricity were awarded to unprepared and even incompetent companies, many of which had ties to Trump administration officials.

Puerto Rico, from a federal standpoint, was abandoned. And so the Condado, whose fortunes have for so long been tied to those of the island itself, took on the new role: that of defender.

The echoes of colonialism are heard everywhere in Puerto Rico, from a population whose speech switches seamlessly between Spanish and English to the imposing stone fortresses that flank Old San Juan. Following the Spanish-American war, the island was transferred to the United States, marking the beginning of a complicated relationship between the two entities. While many Puerto Ricans hoped that the change would eventually lead to more governmental autonomy, others objected to the island’s continued status as a territory of a foreign government rather than a state in its own right.

For a time, though, the new system seemed to be working. When the Condado Vanderbilt was built at the beginning of the 20th century, Puerto Rico was just coming into its own as a tourist destination for wealthy Americans. At the time, the island’s farms were flourishing and the economy along with them, boosting infrastructure and making it a more appealing vacation spot. The Porto Rico Steamship Company added a weekly passenger voyage to its regular commercial route. Hoping to increase demand for the passenger ship, the company invested roughly $50,000 in the construction of what would become Puerto Rico’s first luxury hotel.

“Since the Behn brothers first saw the potential for Puerto Rico, their hotel has been at the epicenter of tourism and luxury hospitality,” says Ben Tutt, the Condado’s general manager, referring to Hernan and Sosthenes Behn, the American industrialists who are responsible for much of San Juan’s development in the early 1900s. It was they who first proposed to railroad baron Frederick William Vanderbilt that he invest in a hotel there, and Vanderbilt agreed to build a hotel that catered to the wealthy American travelers that were hearing more every day about the glamorous “La Isla del Encanto,” or the island of enchantment.

They enlisted Warren and Whitmore, the architectural firm responsible for New York’s iconic Grand Central Station, to design the new hotel. The resulting Spanish Revival-style building was magnificent. Pale cream walls carved with arched doorways and windows sparkled against the surging ocean. Terrazzo floors, a red terra cotta roof and wrought-iron balconies lent the building an old-world glamour, but the amenities were thoroughly modern. An ice plant provided respite from the blazing heat, and guests spent their days and nights on the golf course, dance floor, or the on-site bowling alley. The Condado even featured the first elevator in Puerto Rico, giving it an extra dose of extravagance.

A Whirlwind of Highs and Lows

But all tales of American opulence in the 1920s come to an abrupt halt when confronted with the economic devastation of the Great Depression, and Puerto Rico and the Condado were no different. The island was already suffering the effects of a 1928 hurricane, and the two events combined led to a drastic drop in exports while unemployment soared.

Then in 1933, newly elected president Franklin D. Roosevelt took on Puerto Rico’s issues in a way that was an inverse image of many later administrations. After visiting Puerto Rico and staying at the Condado, Roosevelt’s New Deal created the Puerto Rico Reconstruction Administration. Its recovery efforts concentrated on creating manufacturing jobs, changing the basis of the economy from agrarian to industrial. Employment, prosperity and production all increased, and tourism along with them.

As Puerto Rico entered entered its golden age, so too did the Condado. Commercial airlines made it easier than ever for visitors to reach the island and celebrities like Charles Lindbergh, Errol Flynn and Bob Hope flocked to the hotel. It added 80 new rooms to keep up with the demand, and the nights rang with the clink of martini glasses in the new bar and cocktail lounge. When people envisioned Puerto Rico, they saw the Condado; the two were synonymous.

In 1952, then-governor Luis Muñoz Marin declared Puerto Rico a commonwealth and approved a new constitution, but the new title did nothing to change the fundamental nature of the island’s relationship to the United States. It remained a territory whose citizens were, and still are, denied many fundamental American rights, including that of voting for president. And despite the change in name, the economy soon began to flounder due to government mismanagement; migration from the island grew exponentially as people sought out better paying jobs on the mainland.

Like its home, the Condado had also been treated poorly. Facilities were outdated, renovations had been shoddy. In 1972 it barely escaped demolition, but the then-governor instead declared it a cultural heritage site, preserving the structure but doing little to improve it. The Condado cycled through a series of owners over the next twenty years, none of whom were able to restore it to its former glory. In 1997, the governor ordered the hotel closed; in 1998, Hurricane Georges nearly destroyed it, along with much of the island. 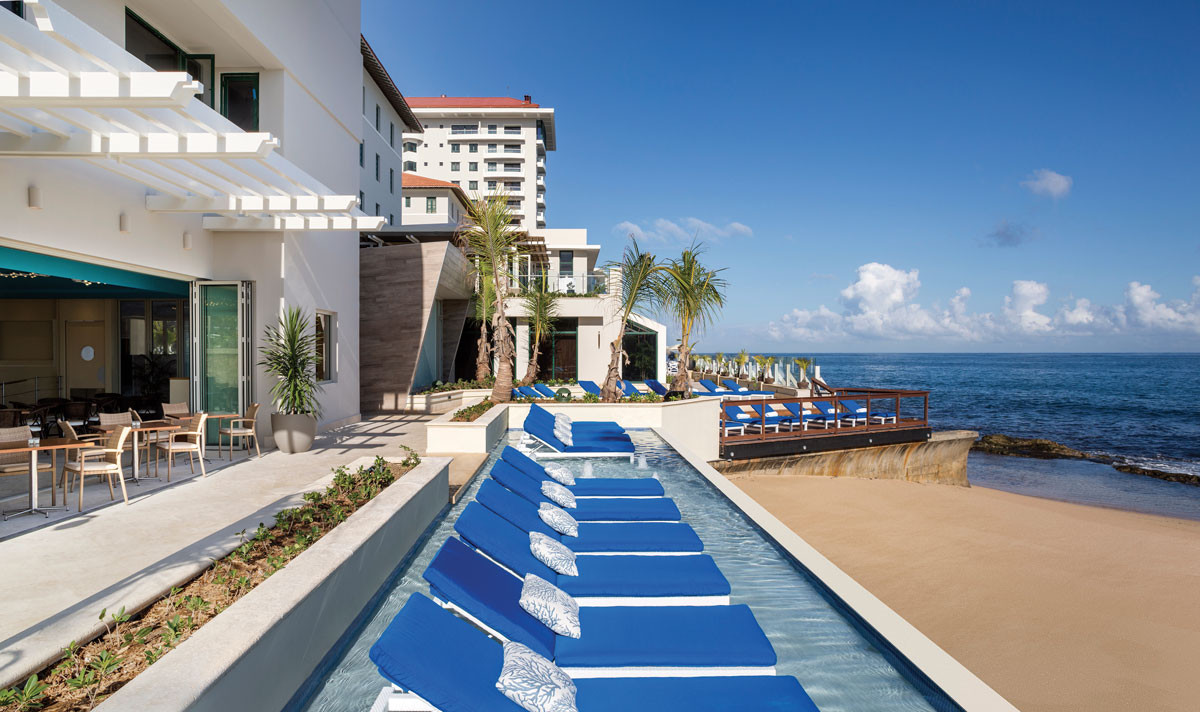 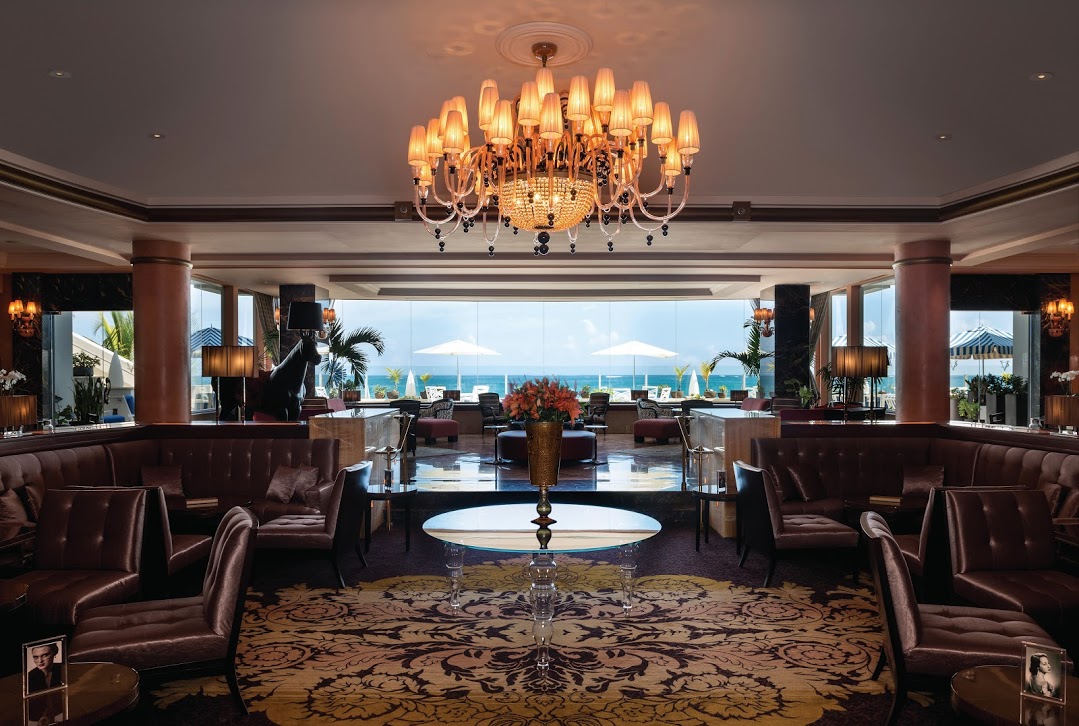 But the Condado’s potential was still there, shimmering just below the dusty surface. In 2004, hotelier Hugh Andrews set out to restore its shine, knowing that to do that, he’d have to start from the very beginning. Everything that wasn’t a part of the original structure was demolished, and in its place rose a love letter to the island and its history. The grand staircase in the lobby was reconstructed and the cathedral ceilings restored, while many of the original decorative aspects were salvaged or reproduced. In 2014, the extensive renovation was completed and the Condado was once again open to the public.

At the same time, Puerto Rico itself was struggling. Mounting debt resulted in the island’s economic status being downgraded, which led to additional government oversight. Higher taxes and diminished public services meant even more tension between the people of Puerto Rico and the American government and that tension only increased when Donald Trump became president in 2016, another election in which Puerto Ricans had no say.

And so when Maria hit, it was perhaps not a surprise to many that the government response was insufficient, though the severity of its inadequacy was still shocking. Puerto Rico needed aid and with business flourishing, the Condado was in a position to help rebuild its home. In the immediate aftermath of the hurricane, the hotel stayed open to house not only guests, but employees, their families and aid workers. “We did it for our family and for the people in Condado,” Tutt says. “We all desperately need some degree of normalcy.”

In those first few months, the Condado became a hub for hurricane recovery, providing everything from a helicopter launching pad to Christmas toys for children whose families had lost their homes. Now, two years on and as the hotel celebrates its 100th anniversary, the focus has moved to sustainable change.

Puerto Rico’s farms, many of which were destroyed by Maria, have begun to reseed and harvest their first rounds of crops. At 1919, the hotel’s fine-dining restaurant, Chef Juan Jose Cuevas is using his menu to both support these generations-old farms and take the island’s agriculture to places it’s never been before. “We’ve found that our efforts at 1919 have lead to a new diversity of products that we did not have prior to Maria,” explains Tutt. As Chef Cuevas has requested new, more unusual items from the farms he works with, other restaurants have followed suit. From there, the world of Puerto Rican agriculture has started to boom once again.

Moving forward, Puerto Rico’s future is unpredictable. Were another hurricane to hit without recovery aid from the federal government, the damage could be incalculable. At the same time, the movement for statehood or independence is growing. But despite the uncertainty, some things are constant: the crashing waves against the seawalls, the power of the unfiltered midday sun, and the white walls of the Condado Vanderbilt Hotel, overlooking it all.

“The Condado is the past, present and future of Puerto Rico,” says Ben Tutt. Standing in the lobby, looking out through that huge plate glass window onto the ocean, it’s not hard to believe it’s true.

Written by Leigh Kunkel, a guest author for Tablet Hotels. Leigh is a journalist from Chicago whose writing has appeared in outlets including the New York Times, Fodor’s, National Geographic and others. She is grateful to the people she met during her recent visit to Puerto Rico for sharing their stories and perspectives on the island, its past and its future. Find more of her work at leighkunkel.com. 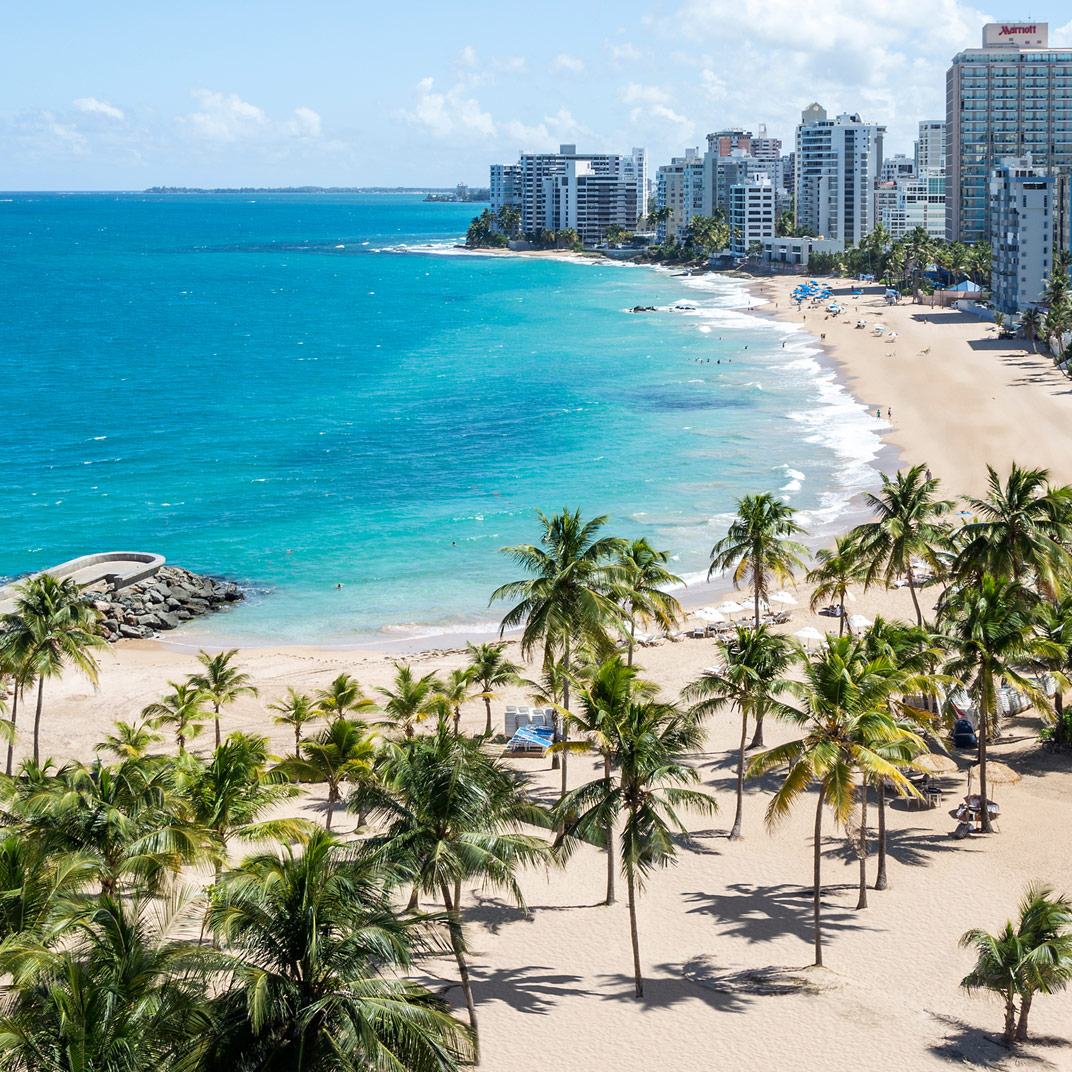 Tablet is your source for discovering the world’s most interesting hotels — places where you’ll find a memorable experience, not just a room for the night. Part of the MICHELIN Guide, we’ve curated a selection of extraordinary hotels, and we make booking them a joy.

If you’re planning a trip to La Isla Encantada, be sure to check out our hand-picked selection of the best luxury and boutique hotels in Puerto Rico.