Laurent Vernhes, Tablet’s co-founder and CEO, recently visited the former Soviet republic of Georgia, where he discovered unique wines, incredible mountains, and a country that is finally getting the attention it deserves.

Every year I take one of my kids on a one-on-one trip, just the two of us, on a rotating basis. They pick the destination, and the only rule is that it has to be somewhere I’ve never been, so that we arrive on an equal footing, start from scratch, and experience the steepest possible learning curve together. This year was my teenage son Sébastien’s turn, and he chose the former Soviet republic of Georgia. So I have my son to thank not only for the fact that I finally got to see this extraordinary corner of the world, but also for the fact that I remember the trip at all. Georgian people are passionate hosts who seem to enjoy nothing more than letting the wine and the chacha — shots of Georgian brandy — flow freely, punctuating the nights with singing and delirious toasts. It would have been irresistible if my son hadn’t been there to keep me away from trouble.

As the co-founder of a travel company, I’m often asked to predict the next “hot” destination. I spend most of my time in the world’s great cities — I live in one of them — so I must say that when it comes to getting away, my priority is to escape the crowds and the hype and take a chance on a long-ignored destination. Even in the age of Instagram there is still a seemingly endless supply of such places. Georgia is now open to foreign travel in a way that it simply hasn’t been during my lifetime. Its gradual — and still ongoing — emergence from the shadow of the Soviet and Russian domination seems to me a clear-cut case of one of the world’s most interesting places finally getting the global recognition it’s always deserved.

In fact the relationship with Russia just got more complicated. An ongoing political dispute has escalated to the point where Russia has stopped its airlines from flying to Tbilisi, effectively cutting the country off from a large fraction of its inbound tourism. So if there were ever a time when Georgia needs visitors from overseas — and arguably an optimal time to go — this is it.

Geographically it’s at a literal crossroads, albeit with some of the most treacherous mountain roads anywhere. Georgians take pride in their reputation as great warriors, but they were conquered at various times by the Persian, Turkish, Arab, Mongol, and Russian civilizations. A most impressive list. Until recently, it had been independent only for a brief time during the 13th century, an era that lives on in the Georgian memory as the country’s golden age. Georgian history and its identity are intimately bound up in the local version of Orthodox Christianity, which is distinct from both the Russian version and the version practiced in neighboring Armenia. But it’s a real cross-cultural experience — if you were brought here blindfolded and weren’t standing in front of one of their characteristic churches, you would have real trouble identifying whether you were in Europe, Asia, or somewhere else altogether. And there’s something for everyone here, from adventuring in the Caucasus mountains to the food and wine scene in Tbilisi, which is paradise for the adventurous eater and drinker.

First, the mountains. The Caucasus range runs across the entire length of the country, covering as much ground as the Alps, but reaching much higher, and towering even more dramatically over their surroundings. The skiing and snowboarding, naturally, are incredible, and Sébastien and I spent some spectacular days on the slopes in Gudauri. If you’re interested in mountains in any capacity, Georgia has got to be on your list.

We also visited the Stalin Museum, in the city of Gori, where he was born. It’s not really a monument to Stalin himself anymore, but something much more interesting: a museum of a museum. They’ve left everything precisely as it was in 1989, and although it was definitely a post-Stalin Soviet monument, it now feels like an ironic comment on propaganda and the layered falsification of history. I’ve never seen anything like it.

Not satisfied with having the tallest mountains in Europe (depending on where you put the border with Asia), Georgia also claims to have the world’s oldest wine culture, and the latest archaeological evidence backs up this claim, dating the earliest Georgian wines at around 8,000 BC, beating Armenia by a couple of millennia on the latest count. The countryside is dotted with a vast number of vineyards, growing something like 500 varieties of native grapes. Tbilisi has more wine shops than Paris, by far. Good wines are always about the story behind them. As a wine-obsessed Frenchman, I embarked on an exploration of what these age-old traditions could extract from their native grapes.

Many of the wines are the work of hobbyists — here almost everyone who lives in the countryside makes their own wine — and the professionally run vineyards weren’t exposed to international competition during Soviet times. I expected it would take a little time for my palate to adjust to a new range of tastes, but some of these bottles were immediately satisfying and soulful, including some sweet red wines and orange wines (produced through prolonged contact with the grape’s skin), an old tradition in Georgia that’s recently become hip amongst innovative winemakers in western Europe. The most traditional local method involves fermenting the wine in amphores, or clay pots, instead of wooden casks or steel tanks. Even in France, where they’re always looking for an edge in wine making, some trendy vineyards are using amphores now, but the Georgians are the masters of this method.

Here are a few bottles to look out for in local stores and wine lists when you make it there: Giuaani “Perle du Caucase” Mtsvane Qvevri 2016, Lukasi Kisi 2014 & Saperavi 2015, Orgo Saperavi 2017, and Shumi Iberiuli Kindzmarauli Semi-sweet Premium 2017. And more widely, Chateau Mukhrani Saperavis is a big winery with extensive distribution, whose wines are more predictable but still high-quality.

The less impressive Georgian wines can be an acquired taste, but they benefit from being paired with Georgian food — which is another excellent reason to visit. Any country with such a variety of cultural influences can’t help but have a unique local cuisine. Georgia’s delights include many Middle Eastern flavors, delicious giant pork dumplings courtesy of the Mongols, and bread which comes in many forms, from naan-like to pizza-like, and rarely disappoints. The staple khachapuri, a sort of heavy-duty sauceless pizza with several types of cheese and sometimes an egg on top, is strangely addictive.

We ate incredibly well, thanks to a few restaurant recommendations by my friend Emily and a few lucky discoveries of our own. Cafe Leila, in Tbilisi’s old town, is a delicious vegetarian restaurant, and Culinarium is a fancier option, where Chef Tekuna is bringing modern Georgian cuisine out of the shadow of the Soviet era. And a great restaurant with an equally great name is Pheasant’s Tears, in Sighnaghi, in the Kakheti wine region — if you’re there, it’s a must-visit restaurant, and is attached to a winery.

Another excellent restaurant which we stumbled upon is Café Stamba, located in the hotel of the same name. Which brings us around to the hospitality scene. Tablet’s hotels in Georgia come from three different brands, but they’re all the work of a single hotelier, Valeri Chekheria, a talented businessman who also seems motivated above all by the desire to be a good host. It would be easy to compare Fabrika in Tbilisi to the Freehand hotels, with their hostel-like vibe, co-working lobby and their bunk-bed rooms. The Rooms hotels are perhaps comparable to the Ace hotels, and Stamba, in Tbilisi, is a more high-end boutique hotel. But they’re not knockoffs or imitations. Rooms Tbilisi isn’t just cool for Georgia, it’s cool, period. It would more than stand its own in Brooklyn, whose spirit was the admitted influence, and the service is in a whole different class. 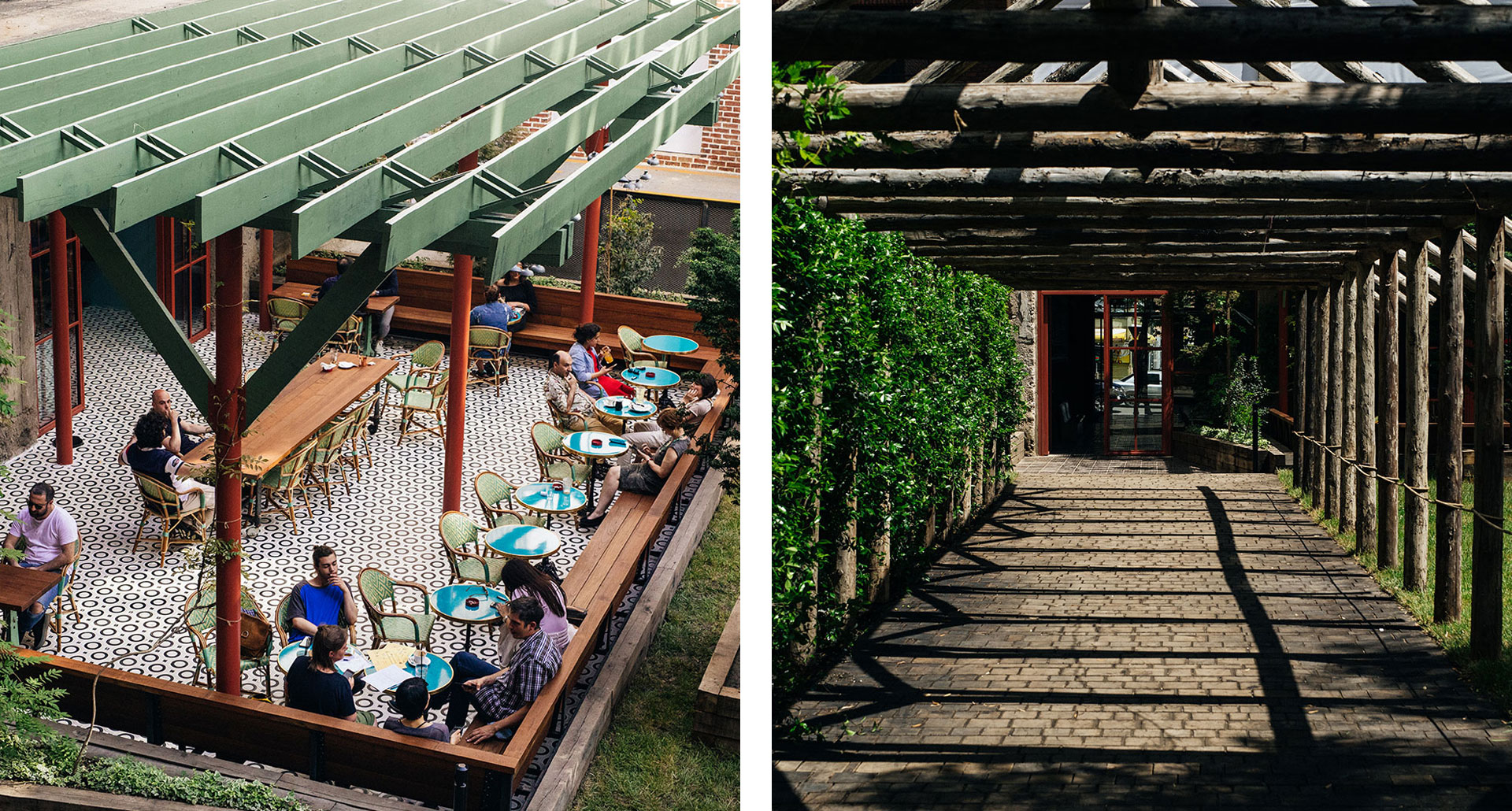 Stamba occupies a classic Thirties building, once home to a famous publishing house, and the building’s post-industrial patina gives it a visual identity all its own — along with surreal flourishes, like the trees that grow through the five-story central atrium. The rooms go all in on retro style, with leather headboards, brass fixtures, and weathered textures, and while they’re unpretentious, they’re possessed of more than a touch of luxury. 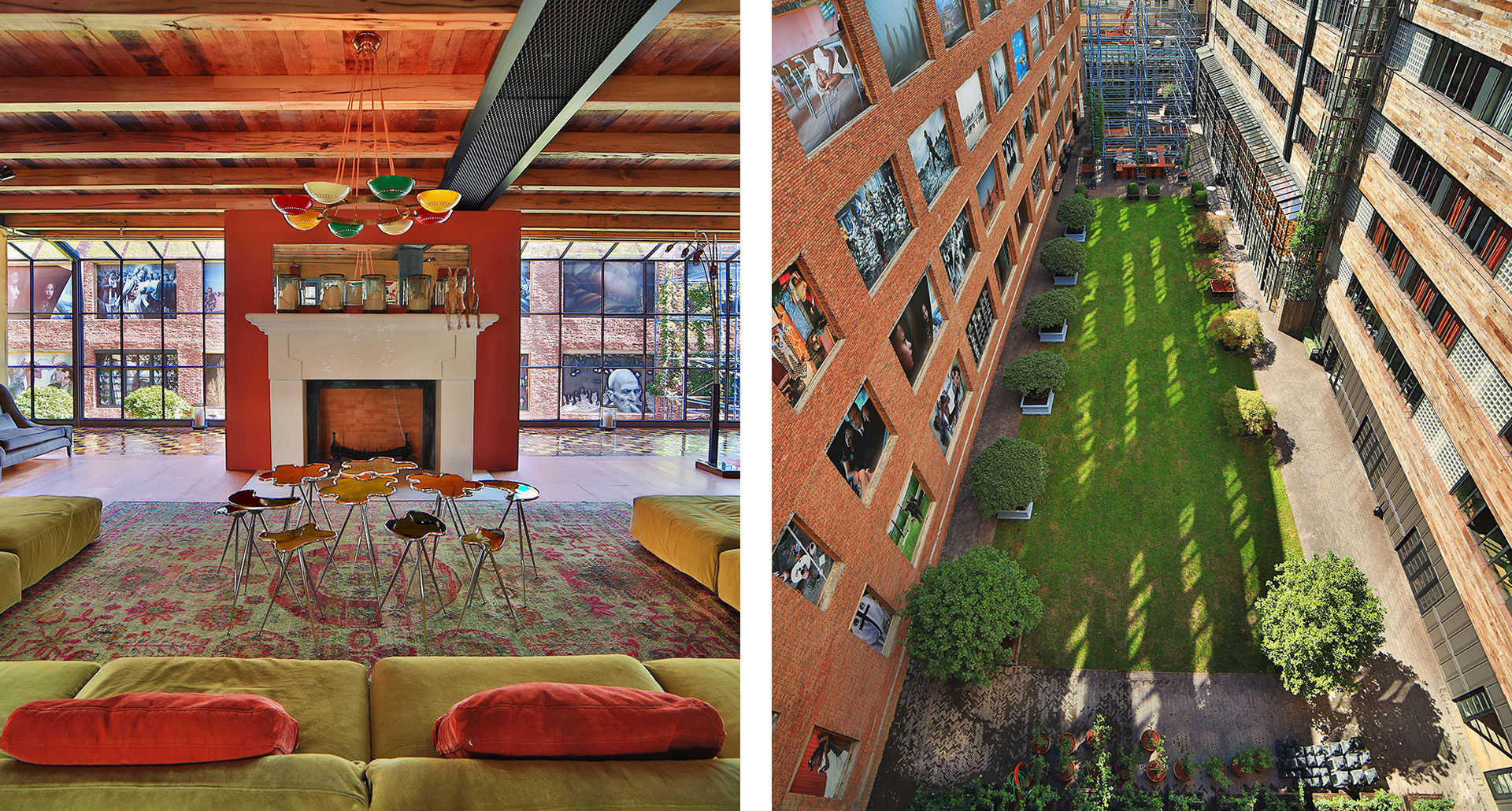 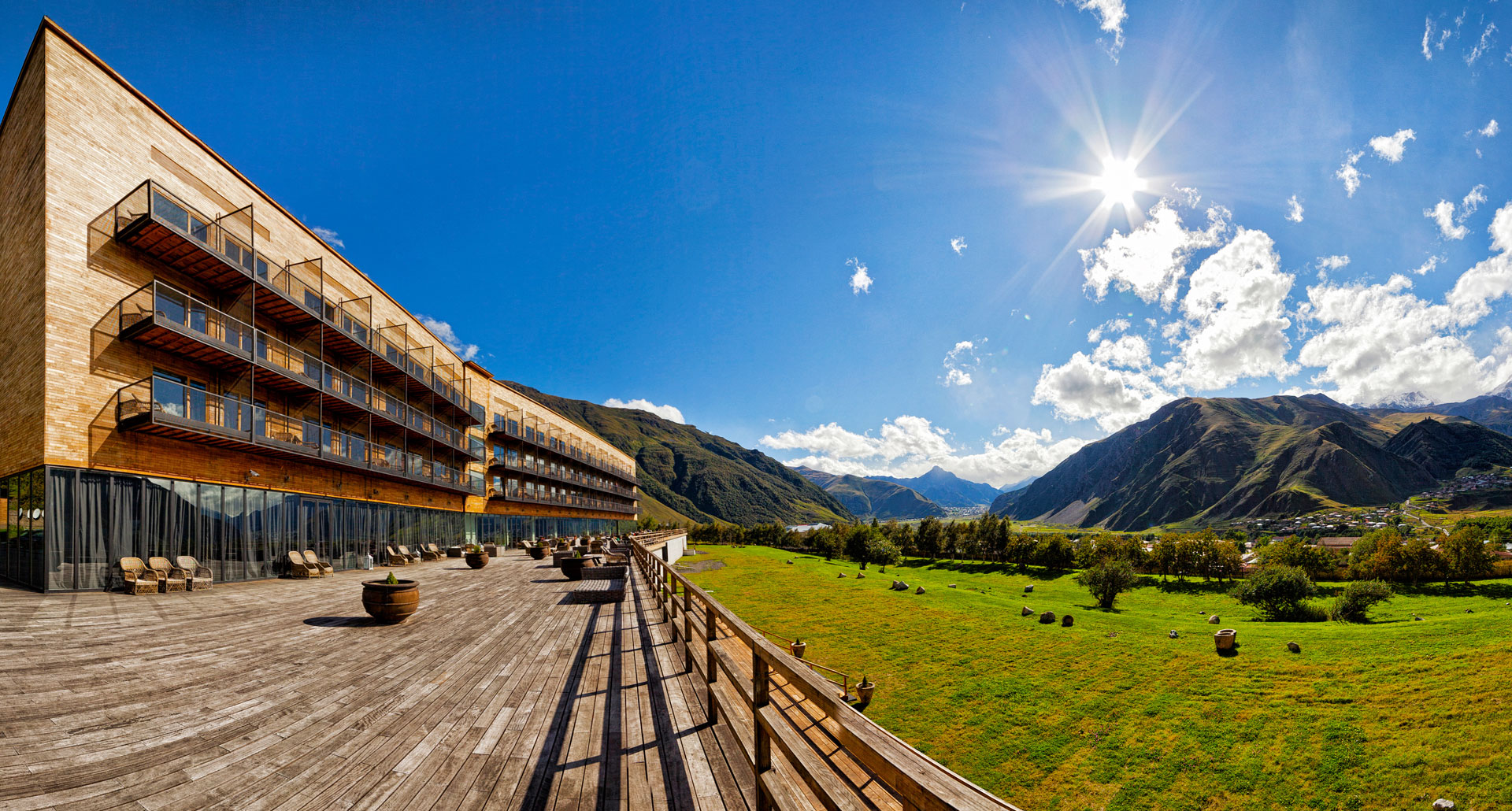 The Caucasus range is an extraordinary natural wonder, and here the architecture draws on the style of a traditional mountain lodge — airy, open spaces, floor-to-ceiling windows, cozy leather sofas — but there’s a modern and sustainably minded twist, with furnishings by Restoration Hardware and the Belgian label Flamant. Native wood, exposed brick, vintage carpets, clean lines and retro-inspired light fixtures and barstools, books to page through, globes to spin: this isn’t your grandfather’s cottage in the mountains. 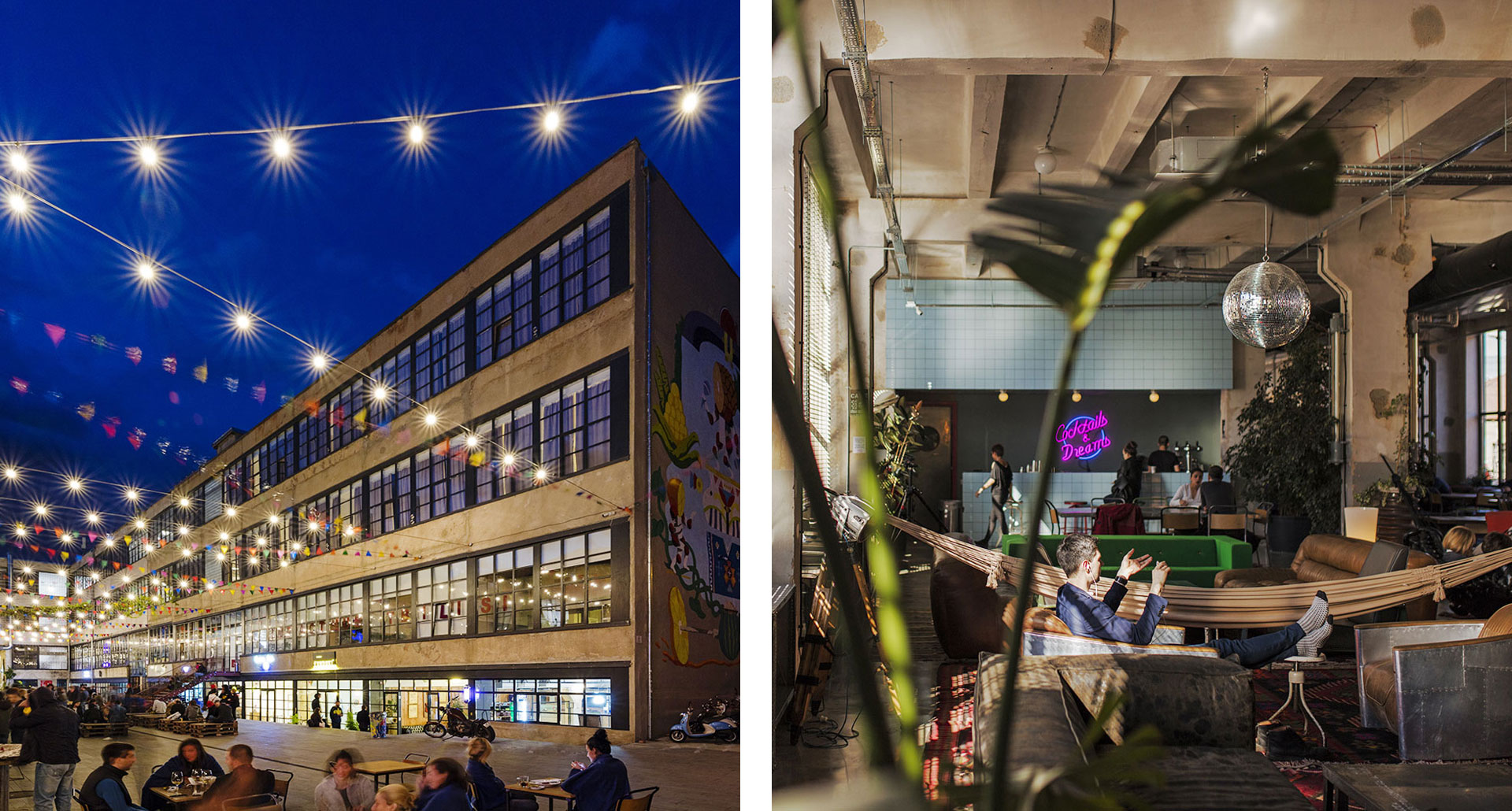 Fabrika follows a concept that’s familiar enough to anyone who’s seen these hotels — part boutique hotel, part hostel, part multi-purpose events space, a hotel where the social life takes precedence over traditional conceptions of luxury. The building, a Soviet-era textile factory, is a utilitarian concrete structure, and the exterior has been left more or less alone, graffiti and all. It’s in the interior that the architects earned their pay, transforming a drab space into something vibrant and welcoming.