In the early 13th century, Angkor was the monumental focal point of one of the world’s most astonishing empires. Eight hundred years later, it’s taking center stage all over again.

In recent years, a number of stellar hotels have opened in the Cambodian city of Siem Reap. The growth reflects the boom of tourists pouring into the country as it puts more and more distance between its current reality and its traumatic past. In 2004, local papers estimated some 800,000 annual visitors per year in Siem Reap. These days, the number cited is 2.5 million. And they’re all here for one thing: the ancient temple complex just up the road.

Angkor Wat exists today much as it did in the 12th century. An inconceivably massive temple, it’s the (Guinness-approved) largest religious structure in the world. In its prime, the temple was a focal point of the most important city in one of the most impressive empires in the world — a city “at least” the size of Berlin. And despite bullet holes tarnishing its outer walls from the days of the Khmer Rouge, Angkor Wat’s five towers still rise hundreds of feet in the air, still sport millions of sandstone blocks engulfed by a massive moat, still preside over 400 acres of architectural and religious wonder, and still stand as a testament to the awesome power of the ancient Khmer Empire.

How iconic is Angkor Wat? Along with a few bars of red and blue, it solely adorns Cambodia’s national flag.

And that’s just one temple.

When you travel here to see it, you’re really visiting a 400-square-kilometer complex called Angkor Archaeological Park. As the most famous attraction, Angkor Wat lends the complex its name. But nearly 300 temples, all built between the 9th and 15th centuries, dot the landscape. Even that might undersell the appeal of the place.

Fair enough, and finding the less well-worn attractions — and appreciating the sheer scale of the infrastructure — is no doubt a special part of visiting this landmark place. But the three most popular temples hold that title for a reason. Those are, by most accounts, Angkor Wat, Bayon Temple, and Ta Prohm. And no trip is complete without a glimpse of them.

Angkor Wat is famous for its sunrise, although some would caution you to see it at a less congested time of day. No doubt you’ll find Bayon crowded as well, but the hundreds of faces carved into the stone, grinning their magnanimous smiles down at you, should put you in a sharing mood. Ta Prohm, meanwhile, is the movie star. Its trippy, tree-consumed structure landed it a spot in Tomb Raider. You can hit those three in a single hectic day, while three day and seven day passes are also available.

And as much as there is to see at Angkor Wat, the city of Siem Reap, about 20 minutes from the park, has become one of the trendier destinations in Southeast Asia in its own right. The epicenter of modern Khmer cuisine, it’s also the one place in the world where everyone will insist you see the circus. Something of a must on par with Angkor Wat, it features an eclectic combination of the performing arts, none of which includes an elephant standing on a stool. The Old Market is touristy, but appealing, just one of the city’s many options for street food and souvenir bargaining. Angkor Wat Put (mini golf decorated with mini Angkor temples) and Sombai (rice wine) tours are other city favorites.

The hotel industry has responded with relish to the 21st-century tourist boom, as creative boutiques lead the way forward, incorporating the country’s pre-war history into luxury experiences. Your hotel isn’t just a place to stay here, it’s a sense of your location in history, a comfortable base from which to see the temples, and a locus in the center of a vibrant city. 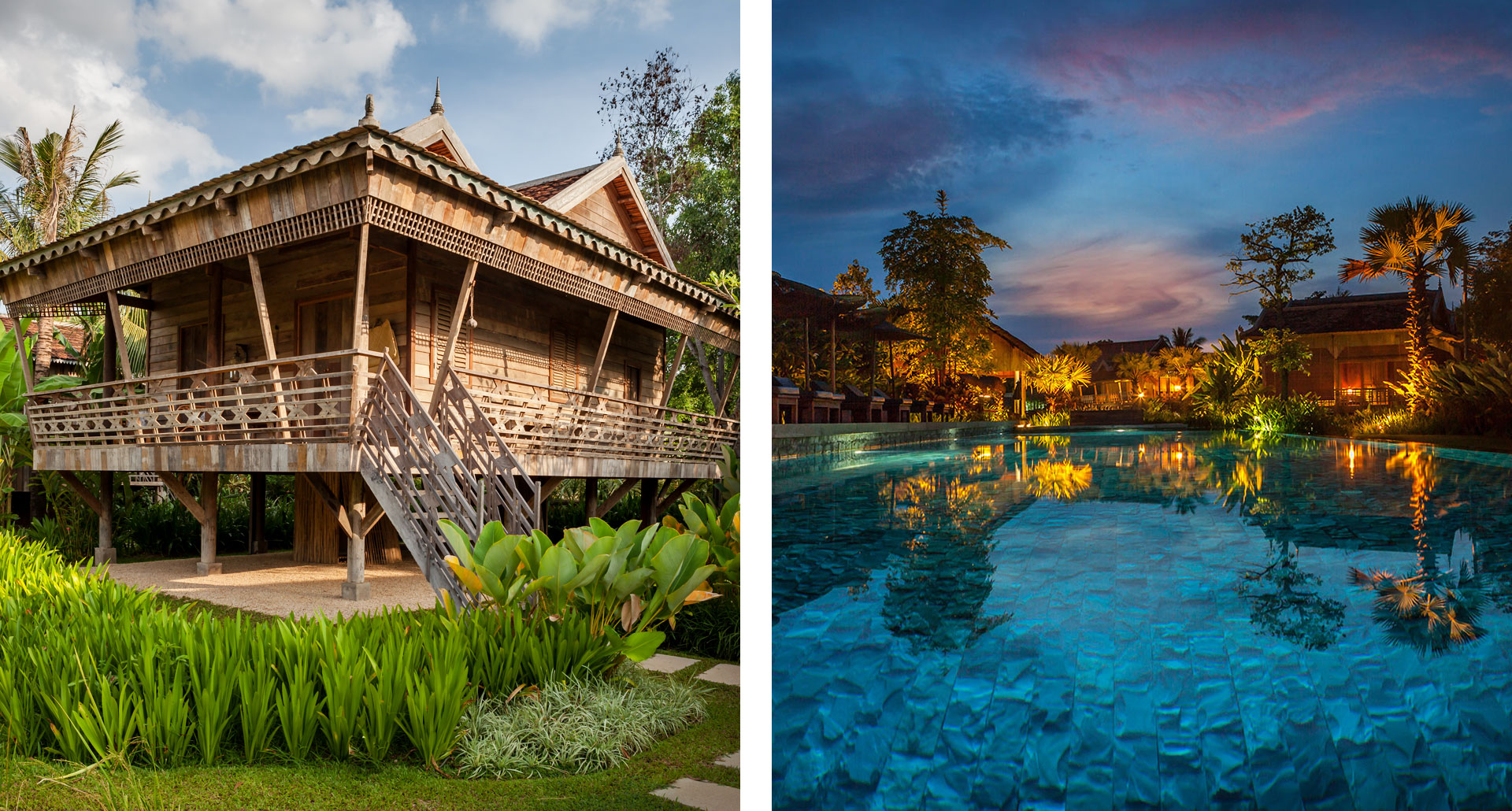 Authentic and handmade, some fifty years old or more, the houses that make up Sala Lodges have all been transported from across the Cambodian countryside and reassembled here on this site to preserve their individual histories and architectural styles. And though carefully preserved, they haven’t gone completely unmodified; expect the latest luxury standard. 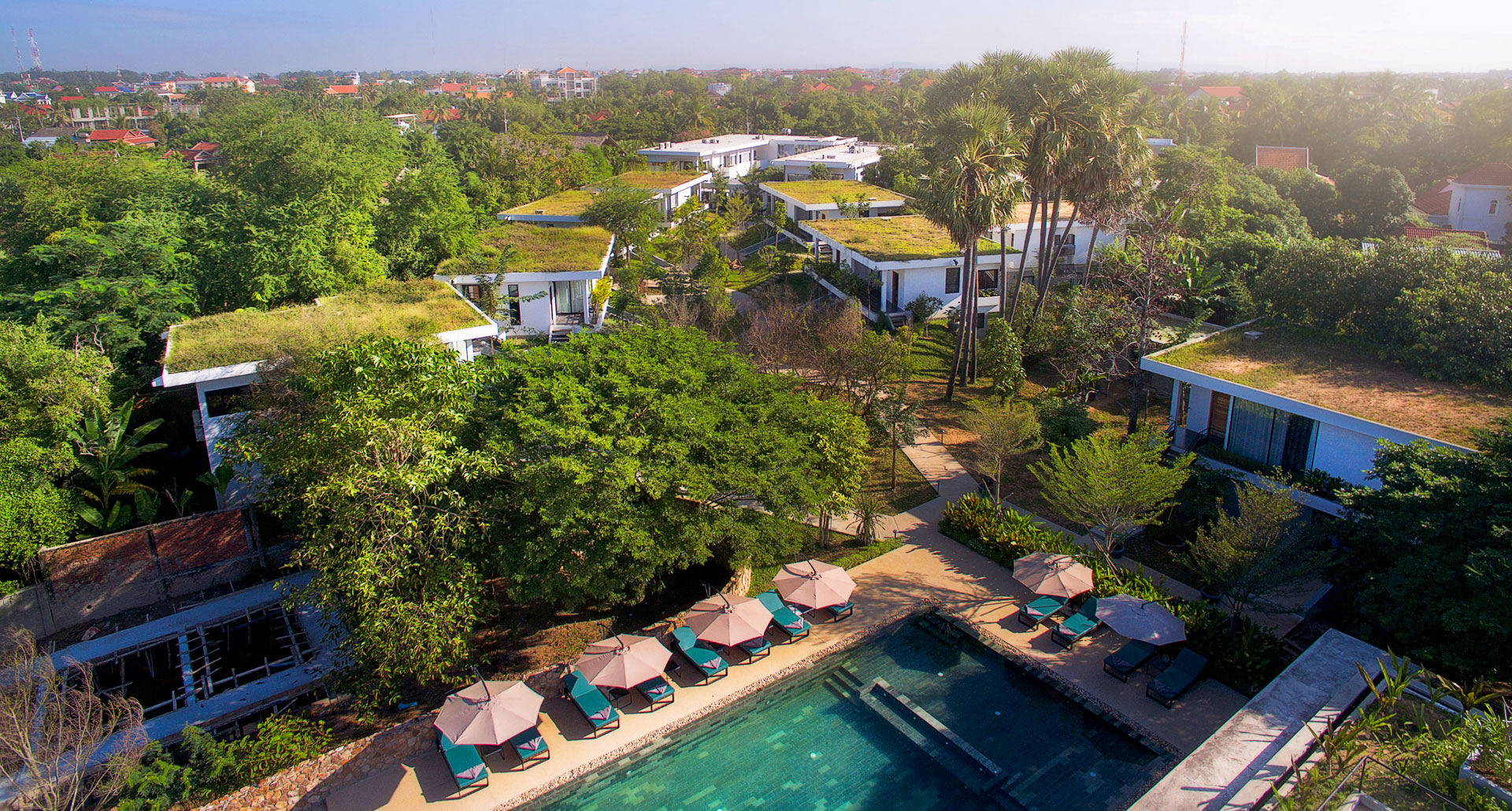 Though close to the city center, the Hillocks Hotel & Spa is a compound planted with gardens and trees that could easily pass for a country estate. You’ll have at least a balcony and a courtyard terrace, a deep soaking tub, and if you book a Jacuzzi Suite, you can probably guess what else. 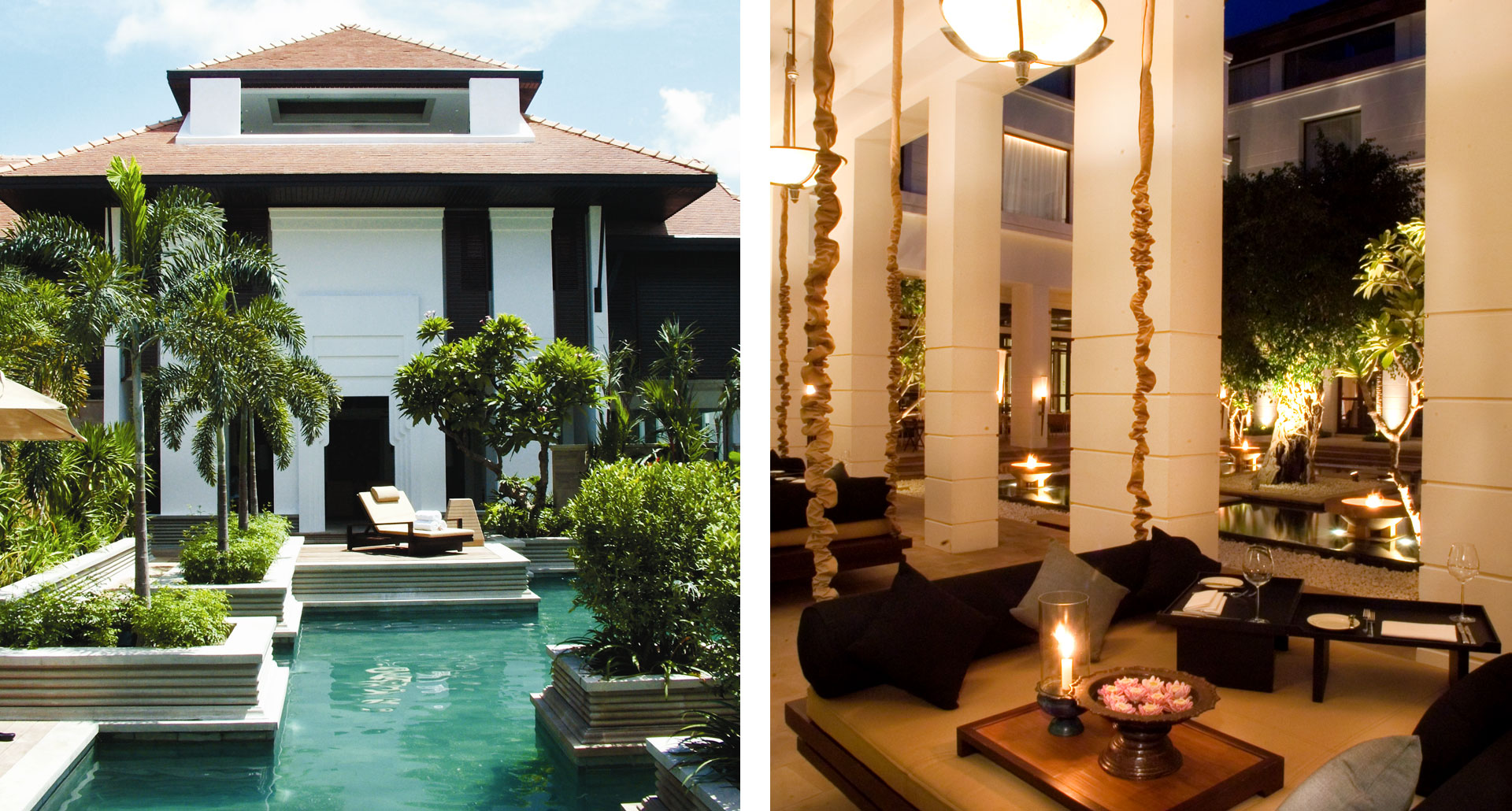 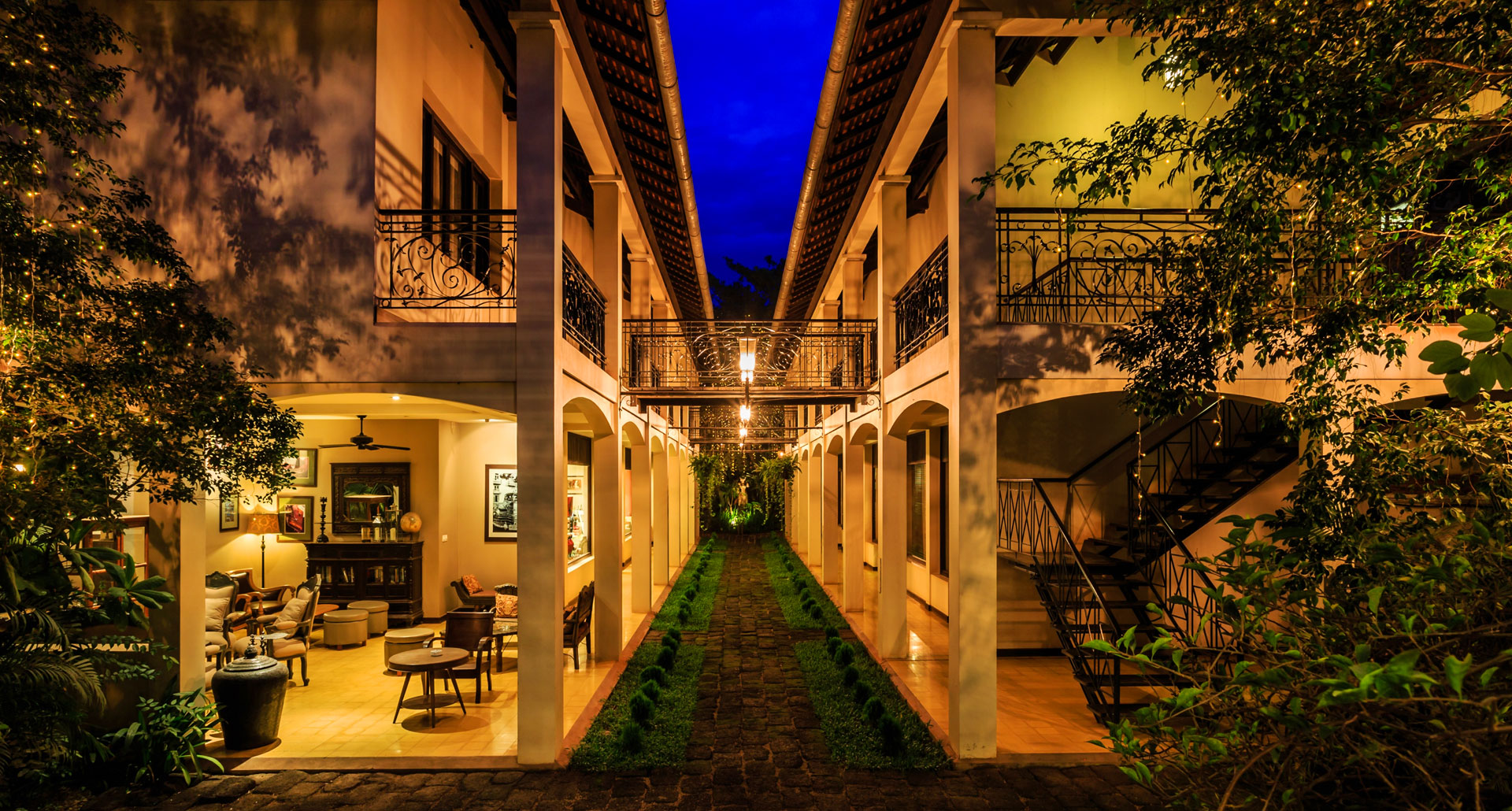 The Heritage Suites abstains from the kind of over-the-top opulence that defines many of its neighbors in favor of a quiet, secluded take on Indochine luxury. The rooms rely on an unexpected mingling of Khmer and Chinese décor, unified by the open floor plans and private gardens complete with palm-shaded Jacuzzis. 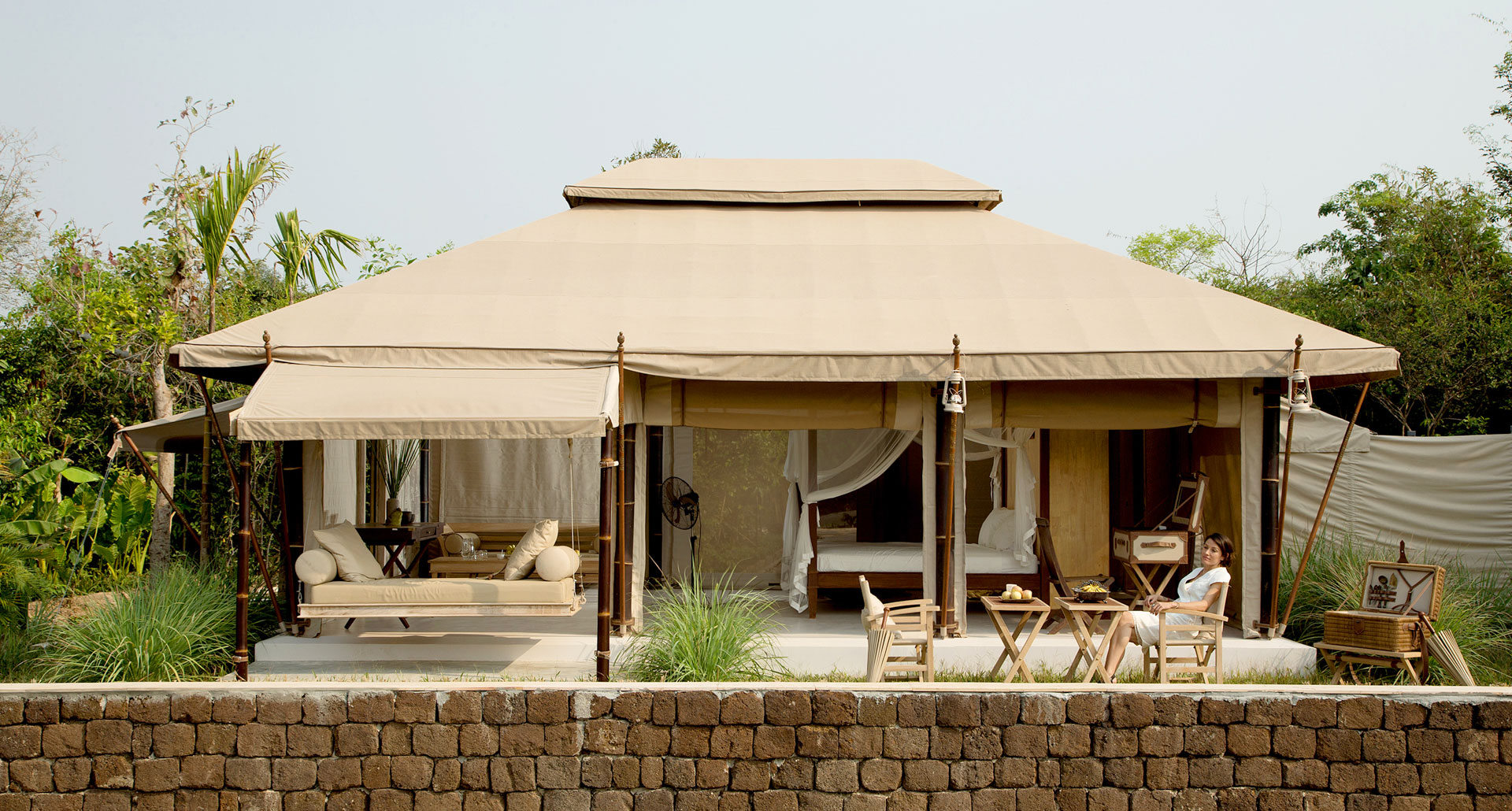 North of the temples, virtually in the shadow of Angkor Thom (the site of Bayon), The Beige would be an extraordinary enough place to pitch a tent of your own, but this is luxury camping, make no mistake: the tents are villa-sized, air-conditioned, with private terraces and luxurious indoor-outdoor baths.

Amansara was once King Sihanouk’s guest house, built in the swinging New Khmer style, a sort of staging ground for the visiting statesman-about-town. Which should give you some idea of the type of luxury retreat here, offering globally inflected Khmer cuisine, two swimming pools, and a spa. It’s an Aman, after all. 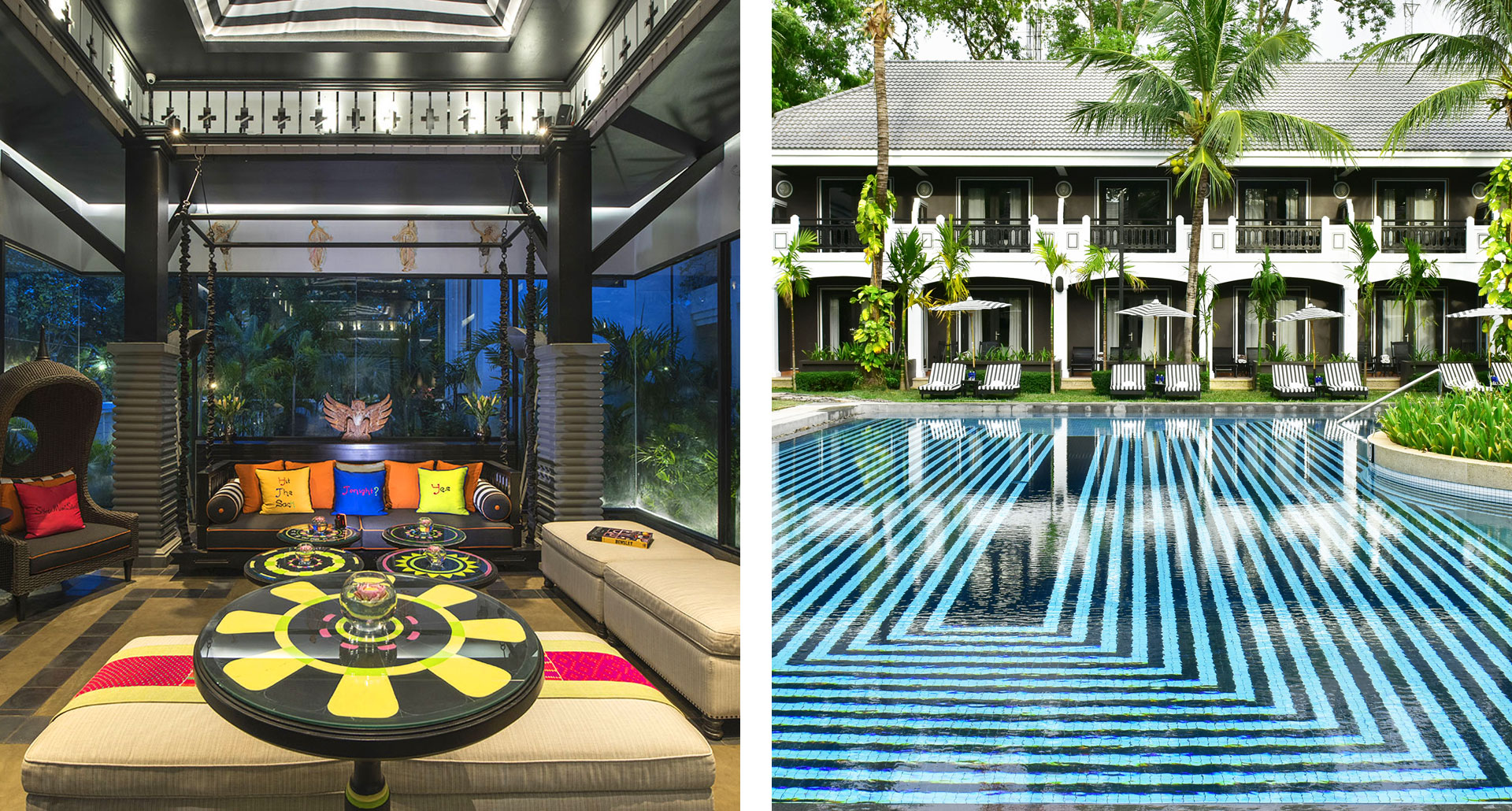 It’s rather more than a shack, to say the least. In the heart of Siem Reap’s French Quarter, Shinta Mani Shack’s outward-facing top-floor balconies look down on the city’s bustling street life while its courtyard presents the opposite vibe entirely — verdant gardens and an idyllic central swimming pool. A full service spa and no fewer than three restaurants complete the picture of boutique luxury. 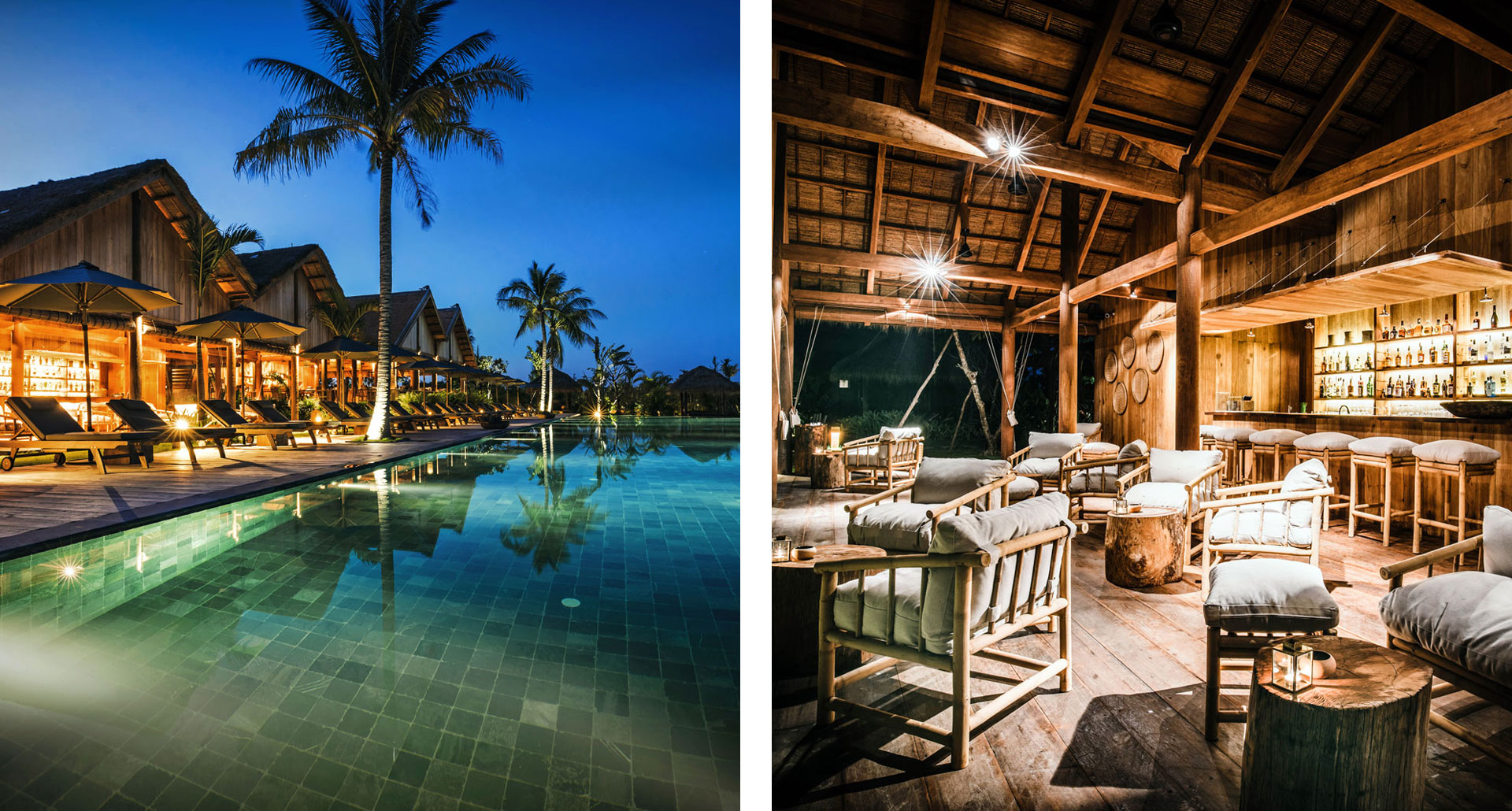 In a quiet setting slightly apart from Siem Reap proper, Phum Baitang’s thatched-roof wooden villas rise up on stilts amid landscaped gardens and paddy fields, creating an immersive experience within, as the name connotes in Khmer, a “green village.” Expect a traditional Cambodian colonial aesthetic, but with open-plan living and first-class materials.