Pig Beach is exactly what it sounds like. It’s one of the most intriguing tourist attractions in the world. It also raises some serious questions about how we travel.

On Pig Beach in the Bahamas, the eponymous inhabitants hear your boat and paddle out to meet you. You can swim with them, hand them food, and take photos by the thousand. The pigs live on an uninhabited island without supervision, but they’re not the boar or warthog you picture surviving in the wild. They’re just pigs — and you’re only human. Of course you want to frolic in paradise with the piggies.

But if you watched either of the recently released Fyre Festival documentaries, and you saw how some tourists treated the residents of Pig Beach, you might find yourself wondering:

Is this the right way to travel? Am I harming this place by engaging with it?

To be fair, it’s a question you should often ask yourself as a tourist. Even when the context could hardly be any different, the question remains the same. Take Matera, a small, ancient Italian city where the mayor bemoaned “we don’t want tourists” even as his city initiated a year-long celebration that would bring thousands.

Because you can’t just beam down, leave no trace, and beam back up. You’re not just one person when you leave for vacation. Whether you’ve come as a group of hard-partying models, the picture of tourists run amok for spring break, or you’ve come alone for solitary meditation, it doesn’t matter. You are a tourist, and you are one of many. And through sheer numbers, you are changing a place.

Is that a good thing, a bad thing, or something in between? An interesting setting for that question is Big Major Cay, the island also known as Pig Beach. 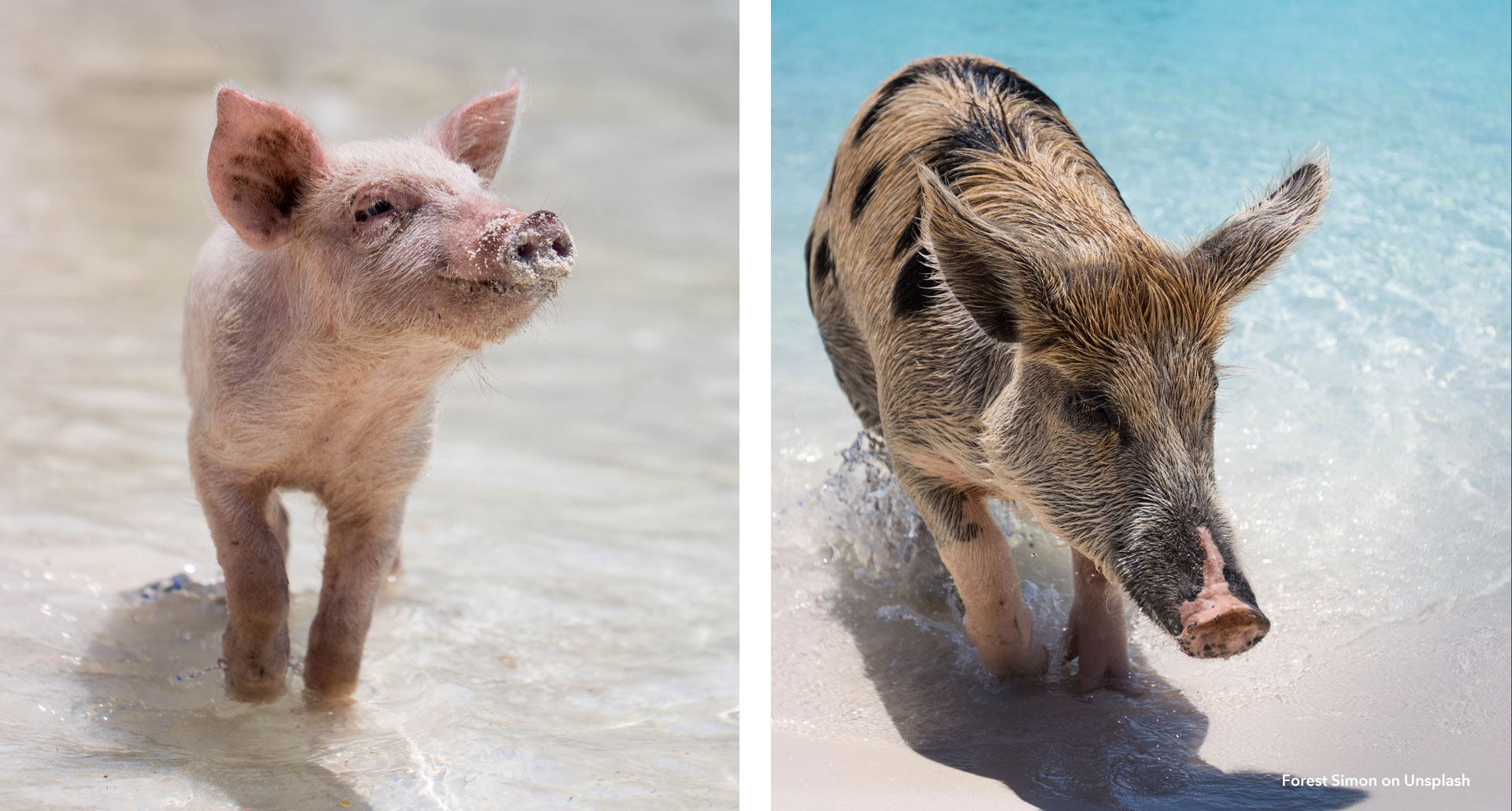 How They Got There
You want to know how the pigs showed up here? You’re in good company. The pigs aren’t native to this Bahamian island in the Exumas archipelago, some 80 miles off Nassau, and the legends of how they first arrived swirl like clear water swarming with hooves.

One story tells of meal-planning pirates who deposited them on the island and didn’t return, another of a man in a Y2K panic with an identical strategy about stashing leftovers. Whichever narrative you believe, it seems like these pigs were fated for pork… until the tourists showed up.

When They Blew Up
CNN weaves what seems like the most credible pig origin story, a tale that sees locals exiling farm animals from their idyllic Exuma islands to make room for a wave of glamorous travelers. As wealthy visitors flocked to the region in the ’80s and ’90s, residents sought an uninhabited, well-watered place to deposit their more odorous livestock. Presumably, they thought hogs weren’t the ideal hotel amenity. Which was short-sighted, considering what happened.

As the years went on, the pigs on the island multiplied and became an attraction. In 2013, a hotel owner turned them into a viral video — and, for lack of a better cliche, the pigs flew. Six years and a thriving Instagram location page later and they’re nearly as big a draw as the sand and sun. The Bachelor featured them in 2016, the same year Amy Schumer brought Jerry Seinfeld to take group photos. A Kardashian showed up. So did a Jenner. By 2018, an astronaut was narrating a movie about them.

The Tragedy
According to CNN, there are no laws that protect the pigs, much to the chagrin of PETA and the like, although their use as a food source has abated. And besides reports of the pigs’ aggressiveness, and a tendency to bite the hand that annoys them, critics seemed to especially have a point about the lax relationship between the pigs and humanity. In February 2017, just around a month after a curious piglet appeared in a Fyre Fest promo, tragedy swept ashore.

As anyone who watched the Bachelor clip above can see, a lack of regulation allowed visitors to do seemingly whatever they wanted to the pigs, including feed them hot dogs (“chicken hot dogs,” the bachelor assured us, in the face of the haunting implication that he might have fed the pigs pig).

After seven died, some locals blamed excessive tourism. “Right now it’s blowing out of proportion with people, anybody, bringing food there, anybody doing what they [want to] do. We have people coming there giving the pigs beer, rum, riding on top of them, all kinds of stuff.”

A Nat Geo report eventually cited sand ingestion during feeding frenzies as the likely cause of death to seven of the island’s swine — although many had suspected alcohol — and it was clear that tourists needed more education about how to interact with the swimming pigs, if they should at all.

Is Pigtopia Possible?
After the catastrophe, volunteers put up signs educating visitors about some best practices, like feeding the pigs in the water to ensure they don’t swallow sand. The Minister of Agriculture and Marine Resources discussed enacting regulations to allow a more controlled experience for tourists to the island. And a nonprofit formed in 2018 makes sure the pigs have a consistent fresh water supply and provides them with vitamins and food supplements.

Still, it’s unclear what, if any, official guidelines were ultimately put in place after the incident. And it’s safe to assume that animal activists will never approve of an arrangement that sees animals exploited for the sake of Instagram likes.

Also true — the fact that travelers will never stop loving cute, semi-feral pigs that swim, paying good money for the privilege and the delight of interacting with them, and coming to the Bahamas especially for it. As if to prove the point, it’s such a popular attraction that other manufactured colonies now exist across the country. There’s no doubt that the copycats will find success, but we’re rather certain that the lack of regulation at Pig Beach — and the fact that it seems so completely un-manufactured — is its major selling point. It’s also the axis upon which the ethical issues rotate.

So we’ll pose the question again: Is this a good thing, a bad thing, or something in between?

Let us know what you think in the comments below.