One of the world’s most important hotel developers explains why hotels are so important.

For those of us who love boutique hotels, Liz Lambert’s properties are a guiding light. From the Saint Cecilia in Austin, to the El Cosmico in Marfa, to the San Cristóbal in Baja, she has created hotels that have helped define modern hospitality and blaze a trail for future generations to follow.

Back in 2009 we asked her to tell us why hotels were so important to her. She replied with the essay below, which so perfectly and profoundly explains this shared passion of ours that we’ve decided, a decade later, to publish it again.

We hope you enjoy. 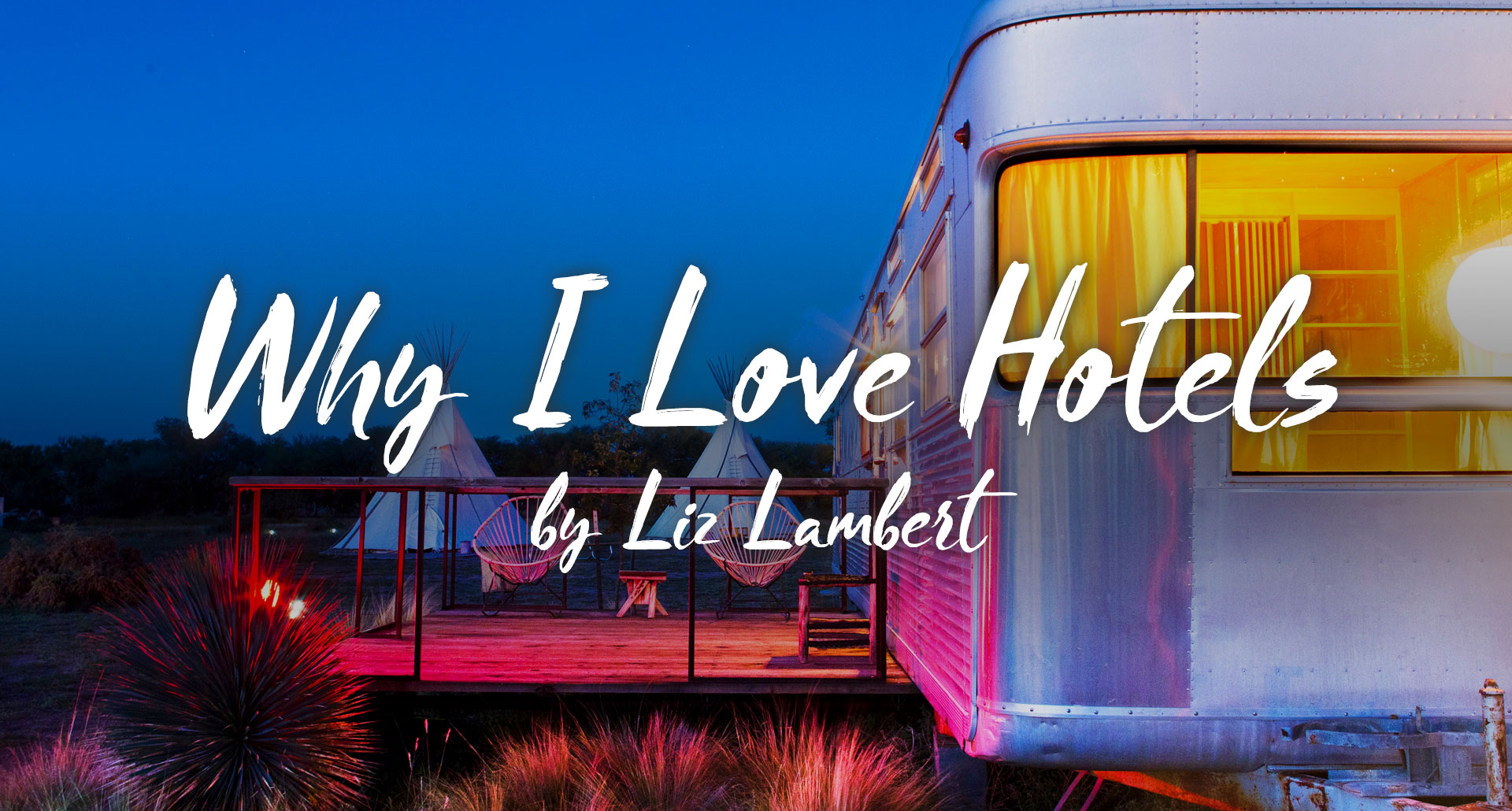 I came out to my mother in the bar at the Waldorf Hotel. I was nineteen. I can still hear clinking glassware and the low hum of strangers’ conversation and the click of her heels across marble as she rushed to the bathroom to hide her tears.

My mother has loved hotels her entire life. Growing up in West Texas on a ranch, a hotel was a window onto a different way of life, in a different city, possibility swirling in and all around you as the bellman held the door. The Palm Court at the Plaza for tea, the Carlyle where we were swept away by Bobby Short, the Inn of the Gods in Ruidoso, New Mexico where I first learned to ski.

My mother and her parents were waiting for an early check-in the lobby of the Texas Hotel in Fort Worth, after taking the overnight train from Odessa when President Kennedy came down the elevator on November 22nd, 1963. “There are no faint hearts in Fort Worth,” he began, “and I appreciate your being here this morning.” A light rain fell. The warmth of the audience response was palpable as the President reached out to a sea of smiling faces. My Granddad pushed my mom forward and she shook his hand before he left for Dallas. The last place Kennedy slept was the Texas Hotel.

Just like her, I can mark certain events by what hotel we were staying in when it happened. My version of the madeleine — mention the name of a hotel and my mind goes rushing back. The Sir Francis Drake in Union Square was my first trip to San Francisco, the Willard in Washington D.C. amidst the china and silver of the four-star restaurant was the first time I can remember feeling grown up, and the Doubletree in Dallas is my oldest brother’s wedding where I drunkenly dropped Jenny Hoppe’s car keys down the elevator shaft.

I turned thirty and my mom turned sixty, our birthdays one day apart, at the Gage Hotel in Marathon, Texas. We were surrounded by generations of friends and the immense night sky. We danced the decades away.

My family made a home base at the Chelsea Hotel for a couple of weeks when my brother Lyndon first got sick. My mother insisted that she be put on a separate floor from my dad whom she had divorced a few years before. She didn’t even care that they didn’t have room service. Somehow, being adrift at sea in the Chelsea with its worn marble stairway and walls covered in art bartered for rooms was the perfect homage to my bohemian brother. The memory of the bruised and battered furniture and my family’s broken spirit are inseparable to me now.

It was at the Royalton, Ian Schrager’s famous Phillipe Starck hotel at Times Square in New York City that my girlfriend Margaret and I met my mother and one of her best friends for dinner with Nancy’s three beautiful blonde daughters-in-law, up to the City for a shopping trip from Odessa. After dinner and several glasses of wine, my mother leaned over to Margaret and said, “That is always how I thought my life would be,” she nodded, a bit teary, and looked at the girls, shopping bags tucked under the table, “but I would never trade you and Liz for all the world.” Possibility swirling in and all around you as the bellman holds the door, as you pull the bags out of the back seat — given the right night, the right backdrop, it might mark your life forever.