Bhutan’s not the first destination on most travelers’ lists. And that’s on purpose. The Himalayan kingdom only opened to visitors in 1974, and today it limits their numbers by charging $250 per traveler, per day (some of which goes towards expenses, such as accommodations and a guide). Is it worth the price? Well, if you’re willing to play by Bhutan’s rules, then you’re in for some of the most impressive hikes, monuments, phallic imagery, spicy cheese — but we’re getting ahead of ourselves. Yes, it’s worth it.

Here’s where to begin in Bhutan:

IF YOU HIKE TO ONE MONASTERY:
In a country littered with hikes and monasteries, the legendary Taktshang Goemba (Tiger’s Nest Monastery) combines the best of each. You wouldn’t call nearly 1,000 steps up a cliff’s edge at 10,000 feet above sea level easy, but the trek’s certainly not impossible, either. It takes about three hours one-way, but once you make it, you’ve really made it. Leave your valuables at the gate and enter a series of sacred temples and caves decorated with murals and statues of Buddhist gurus. It should go without saying that the views are unmatched.

IF YOU NEED A SPA DAY:
Go for a bath. And make it hot stone. One of the country’s famous traditions, it’s a medicinal practice that owes some of its history to neighboring Tibet. This first-person piece is required reading for any aspiring bath enthusiasts on their way to Bhutan. But suffice to say that the hot, apparently mineral-rich stones dropped into a wooden tub — filled with Bhuatenese river water and an herb called Artemisia absinthium — encourage the soaker to (despite the temperature) chill out. We can’t help but point you to the especially opulent experiences at Uma Punakha and Amankora. You could also opt for the natural hot springs.

IF YOU BUY ONE SOUVENIR:
This might sound weird, but consider something phallic. Drukpa Kunley, aka the “Divine Madman,” is often thanked — or blamed — for the pervasiveness of the penis-inspired religious symbol that traditionally adorns homes, doorways, necklaces and the like in Bhutan. As the country’s opened up to the world and the west, however, the phallus has reportedly receded a bit, but the tradition’s still in full force at Chimi Lhakhang, a monastery in a gorgeous setting dedicated to the “madman.” As one writer put it, passing shops full of penile tchotchkes on the way to the site: “I regret that I didn’t buy a single penis key fob.”

IF YOU VISIT ONE DZONG:
Punakha Dzong, a 17th century structure built between two rivers and ringed by jacaranda trees, is one of the oldest and largest dzongs in Bhutan. Certainly, it’s one of the most gorgeous. A dzong, to answer your question (especially on the heels of the last blurb) is a combination between a fortress and a monastery. And they’re scattered across Bhutan, noted for their unique architecture and stunning facades. The Punakha Dzong was also the site of the king and queen’s royal wedding in 2011, if you’re into that kind of thing. It’s a pretty big deal.

IF YOU EAT ONE SPICY DISH:
Risk the scorched-tongue experience of ema datshi. The national dish of Bhutan is a combination of chilies and Bhutanese cheese into something like a curry or stew. Yes, it is spicy. Yes, that is typical of Bhutanese food. As one writer puts it, hot chilies aren’t used for flavor here, they’re “used as a vegetable.” Meaning ema datshi is not the only way to get your capsaicin fix. Momos, the region’s dumplings, are eaten with plenty of chili sauce, and jasha maroo is the local take on a spicy chicken stew. Wash everything down with ara, the traditional rice wine.

Bhutan is unlike any other destination, and the hotels featured on Tablet are unlike any other hotels. You know where to start when it comes to unique local attractions — now it’s time to discover where you should stay. 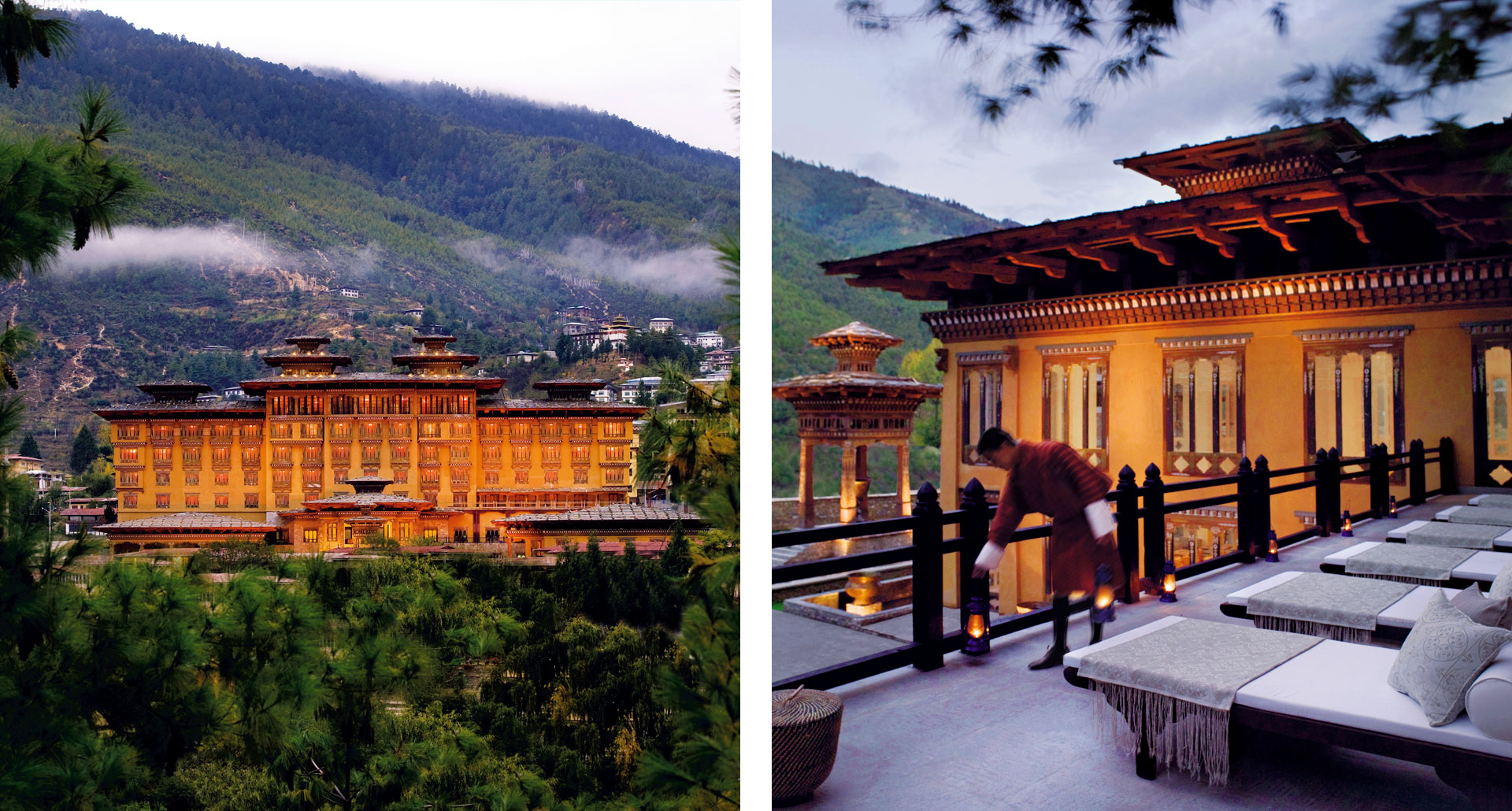 The Taj Tashi Thimpu is quintessential Bhutan — designed with the country’s famous dzong architecture in mind, situated in the capital city, with a restaurant serving ema datshi — but at its absolute most luxurious. Picture things like pillow menus, heated floors, and divans with views of the treetops and swirling clouds. Consider this your reward after hiking up Tiger’s Nest. 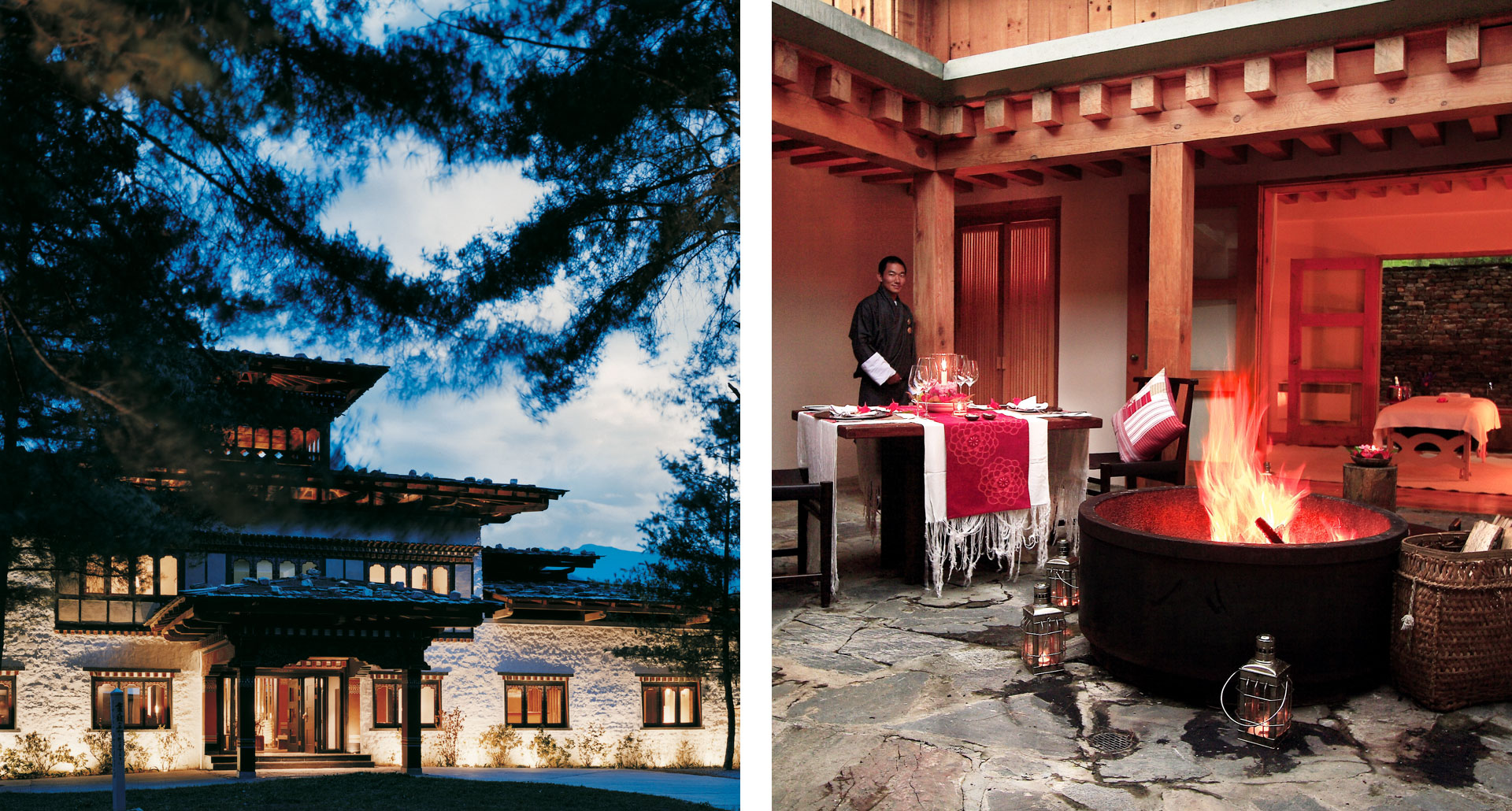 Set in 38 acres of wooded hillsides with stunning views to rival any in the country, COMO Uma, Paro is all about its modernist architecture and Zen-inspired interiors that work well in the Himalayas. At the unmatchable Shambhala Spa, the emphasis is less on beauty than on yoga, massage and Ayurvedic medicine, striving to offer wellness not just physical but spiritual as well. 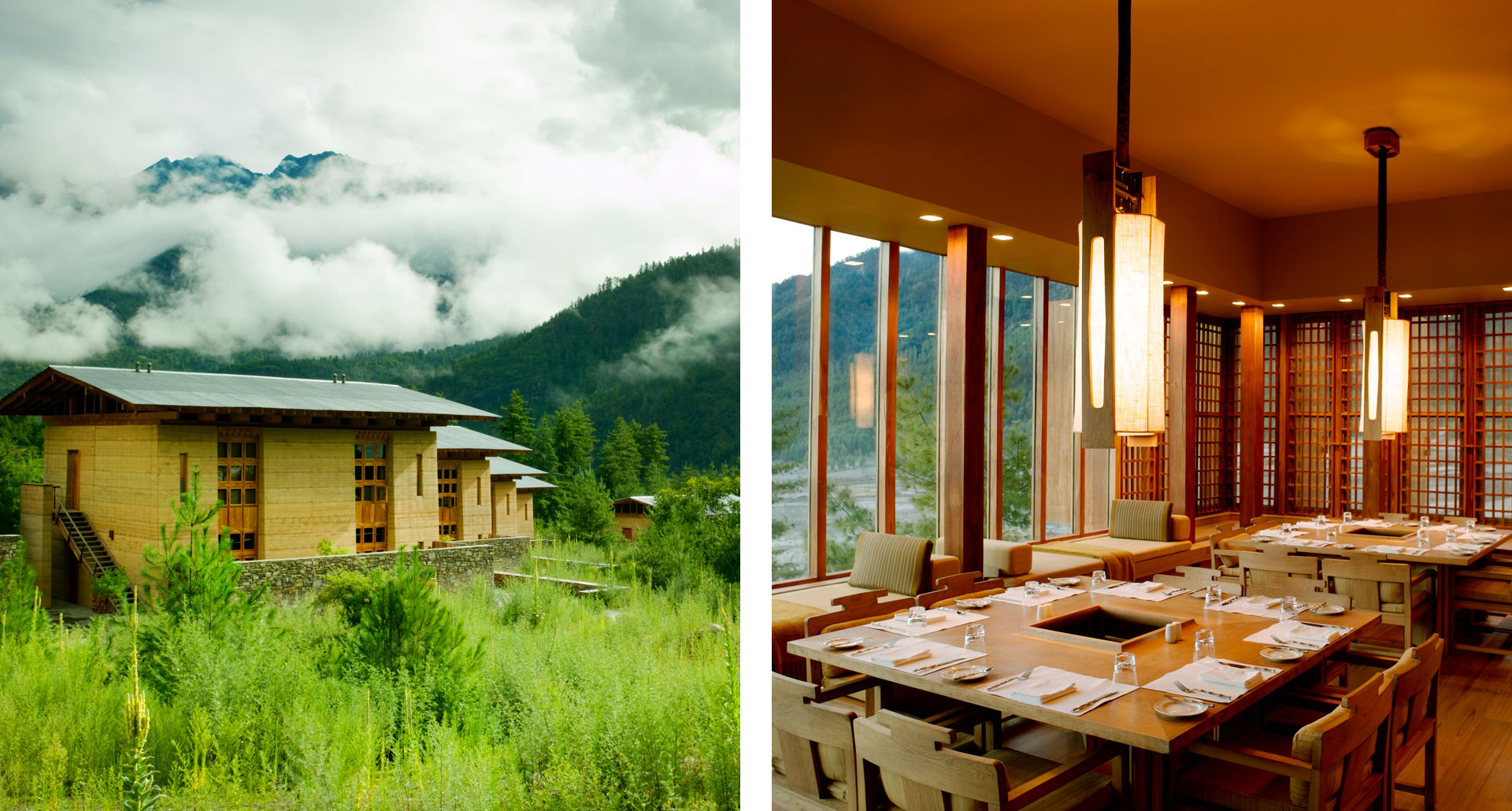 It’s an Aman, with everything that brand connotes, but rather than a single hotel complex, Amankora is a series of lodges spread across the valleys of central and western Bhutan, offering spectacular views and tranquility across Paro, Thimpu, Punakha, Gangtey, and Bumthang. Yes, you can organize to tour them all. Just don’t expect TV and room service — instead, prepare yourself for wood-burning stoves, palatial beds, deep baths and other staggering luxuries. It’s an Aman, after all. 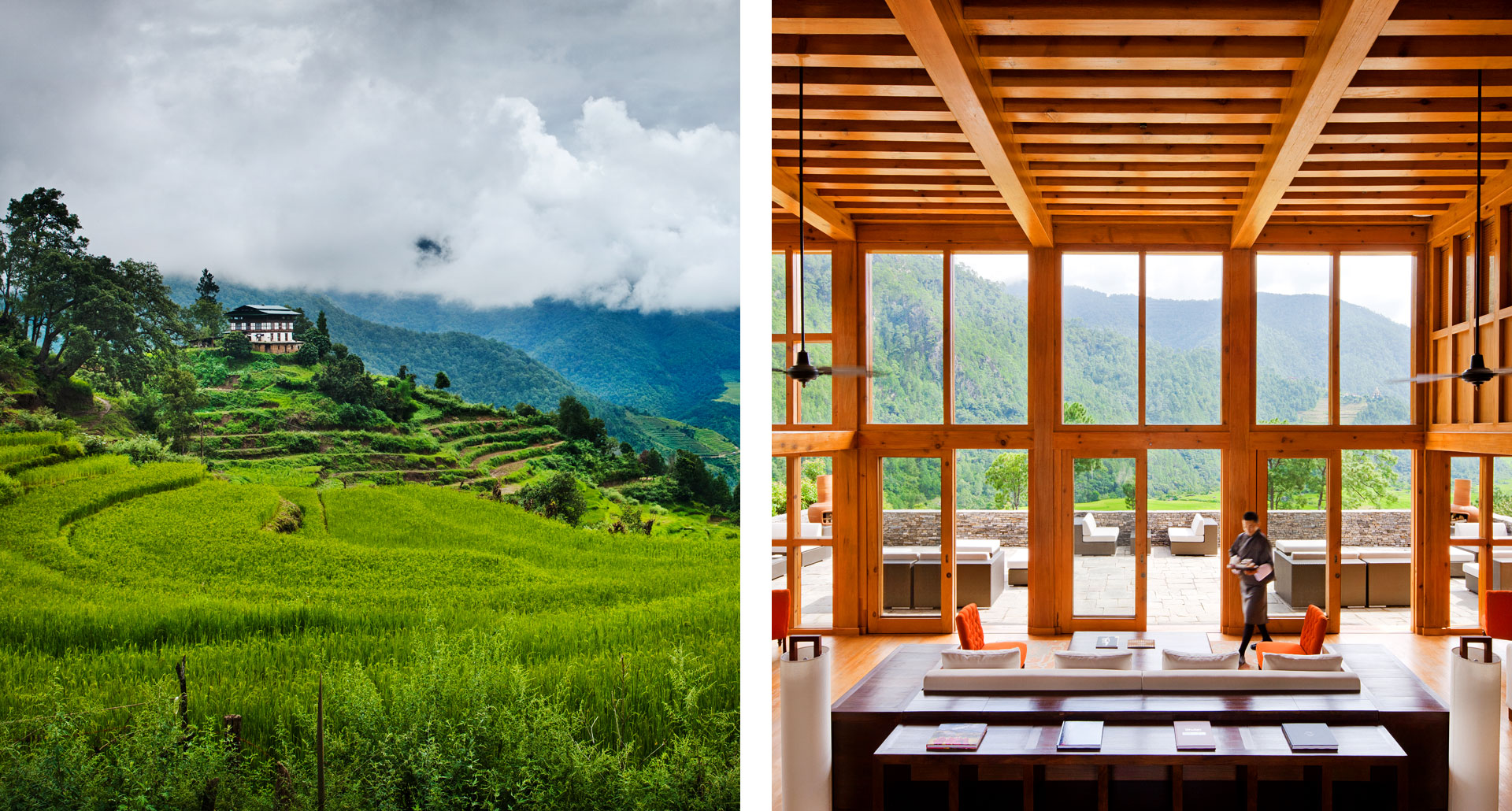 The one problem with Como Uma, Paro, is that there’s not enough of it to go around. Enter Como Uma, Punakha — five hours away, and offering a similar experience, this one’s nestled within a lush green valley overlooking the Mo Chu River.

See all of our hotels in Bhutan.