You can hear 140 languages in Toronto, a place that’s as beloved for its diversity at least as much as it’s feared for its winter weather (which isn’t as bad as you think). It’s a place where you can find any community of people, along with any type of attraction. Welcome to Toronto, a city that gives you bustling markets and fine dining, stunning nature and massive skyscrapers, a cultural center (or, in the local dialect, “centre”) with something for every traveler.

Here’s where to begin Toronto:

IF YOU CHECK OUT ONE NEIGHBORHOOD:
If you didn’t know better, you might think Toronto’s Kensington Market is an actual, contained market, one with stalls and vendors. Then you’ll go there, find yourself in one of the most multicultural cities’ most multicultural neighborhoods — full of vintage shops, trendy cafes, art galleries, and restaurants — and feel even better about your decision to come. A Jewish neighborhood at the turn of the century, it’s now a mosaic of the city, decorated with colorful Victorian houses and plenty of shopping. Rasta Pasta (food) and Kid Icarus (crafts) are two favorites in this not-really-a-market market.

IF YOU GO TO ONE ACTUAL MARKET:
The historic St. Lawrence Market, on the other hand, is a real, honest-to-god market. Cheese, fish, meat, bread, jewelry, gifts, wine — it’s all here, and, it should be noted, so is seemingly every man, woman, and child in Toronto. It’s crowded. On Saturday, you’ll want to get to the North Market especially early for the farmer’s market. The same can be said for the antique market on Sunday. The 120 vendors in the South Market are a more regular attraction, with a general agreement that the peameal bacon sandwiches at Carousel Bakery live up to their fame.

IF YOU GO TO ONE HIP RESTAURANT:
Toronto’s diversity is what makes its food scene such a joy, and just as you can sample every type of food in a casual setting like Kensington Market, the renowned restaurants bring that same spirit of culinary variety, of food inspired by every corner of the globe. At the tapas restaurant Bar Isabel, where a table is as coveted as anywhere in Toronto, Vogue points out that jamon Iberico de Bellota sits on the menu alongside shishito peppers. In any case, if you’re with a group, get the full octopus. Chef and owner Grant van Gameren is a bona fide Canadian star, and if you’d rather try somewhere a little easier to get a table, you can head to his Bar Raval.

IF YOU WANT TO SEE NATURE:
If you only want to feel like you’re leaving the urban center, without actually driving anywhere far-flung, then it’s time for Toronto Island Park. Just a ten to twenty minute ferry from downtown, the islands feel infinitely further from the city in vibe. And typical of Toronto, there’s something for everyone: beaches for the sunbathers, an amusement park for the kids, even a haunted lighthouse and a nude beach. Yes, there’s a nude beach in Toronto. No, it’s not recommended in winter. What is, though, is cross-country skiing, snowshoeing, ice skating, and all the other freezing things people do when they can’t undress on the beach.

IF YOU VISIT ONE BIG TOURIST ATTRACTION:
Yes, Toronto actually has a castle. Casa Loma, to be specific, a Gothic Revival masterwork with 98 rooms. Built in 1914 by a one-time soldier and eventual hydro-electricity magnate with a humble dream (to build a castle towering over the city), it offers tours of the secret passageways, the ornate decorations, and the staggering view from the tower. The impressive Baldwin Steps are also nearby, boasting their own pretty staggering view. And as long as we’re talking views and (literally) big tourist attractions, we’ll also go ahead and mention the famous CN Tower.

Toronto is unlike any other destination, and the hotels featured on Tablet are unlike any other hotels. You know where to start when it comes to unique local attractions — now it’s time to discover where you should stay. 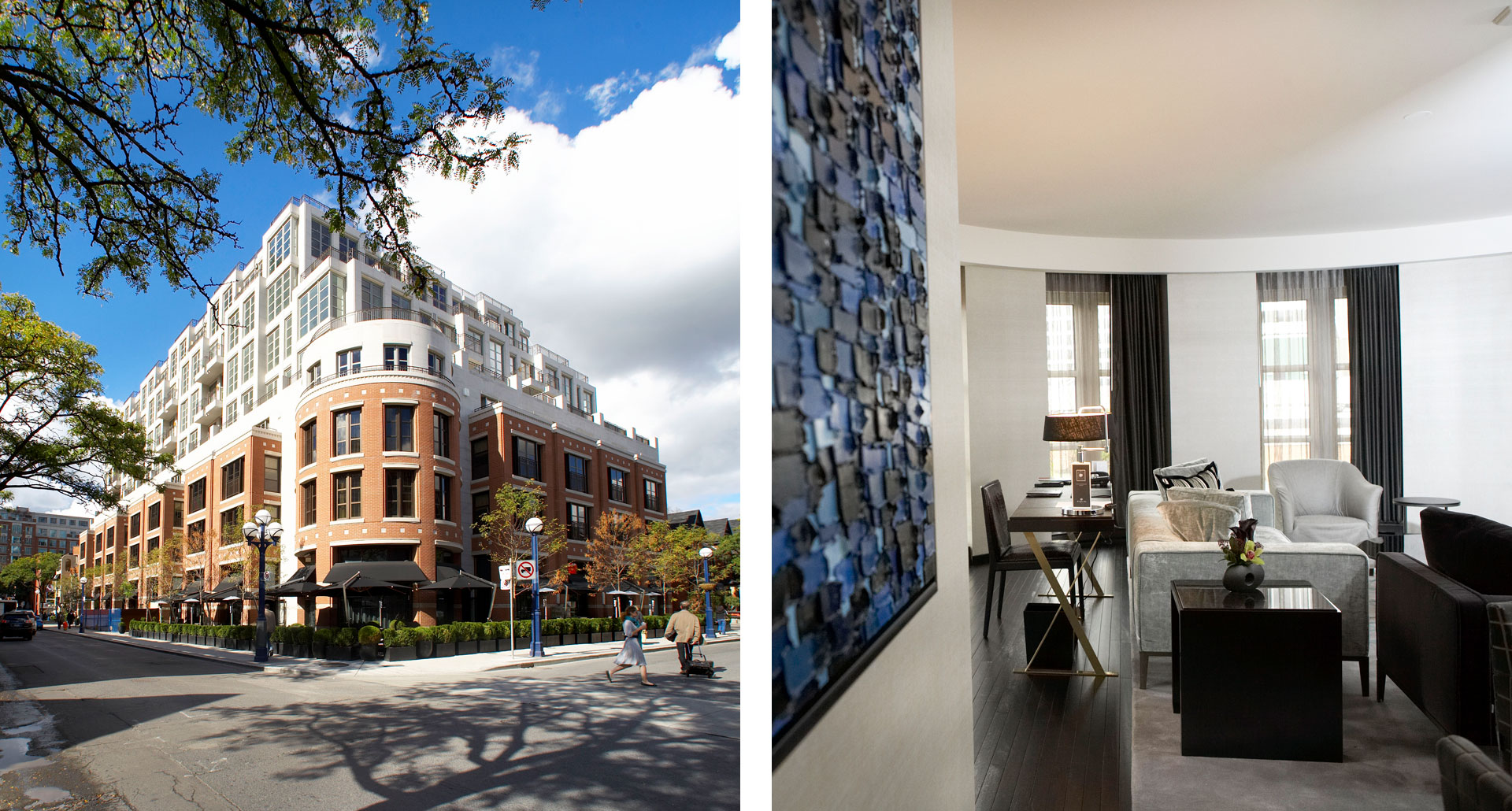 The Hazelton is one of Toronto’s high-design and high-end offerings, arguably the most luxe of all the city’s new boutiques. To paint the picture, we’ll mention the heated bathroom floors, the mirror-mounted televisions, the private screening room, and the year-round indoor pool. 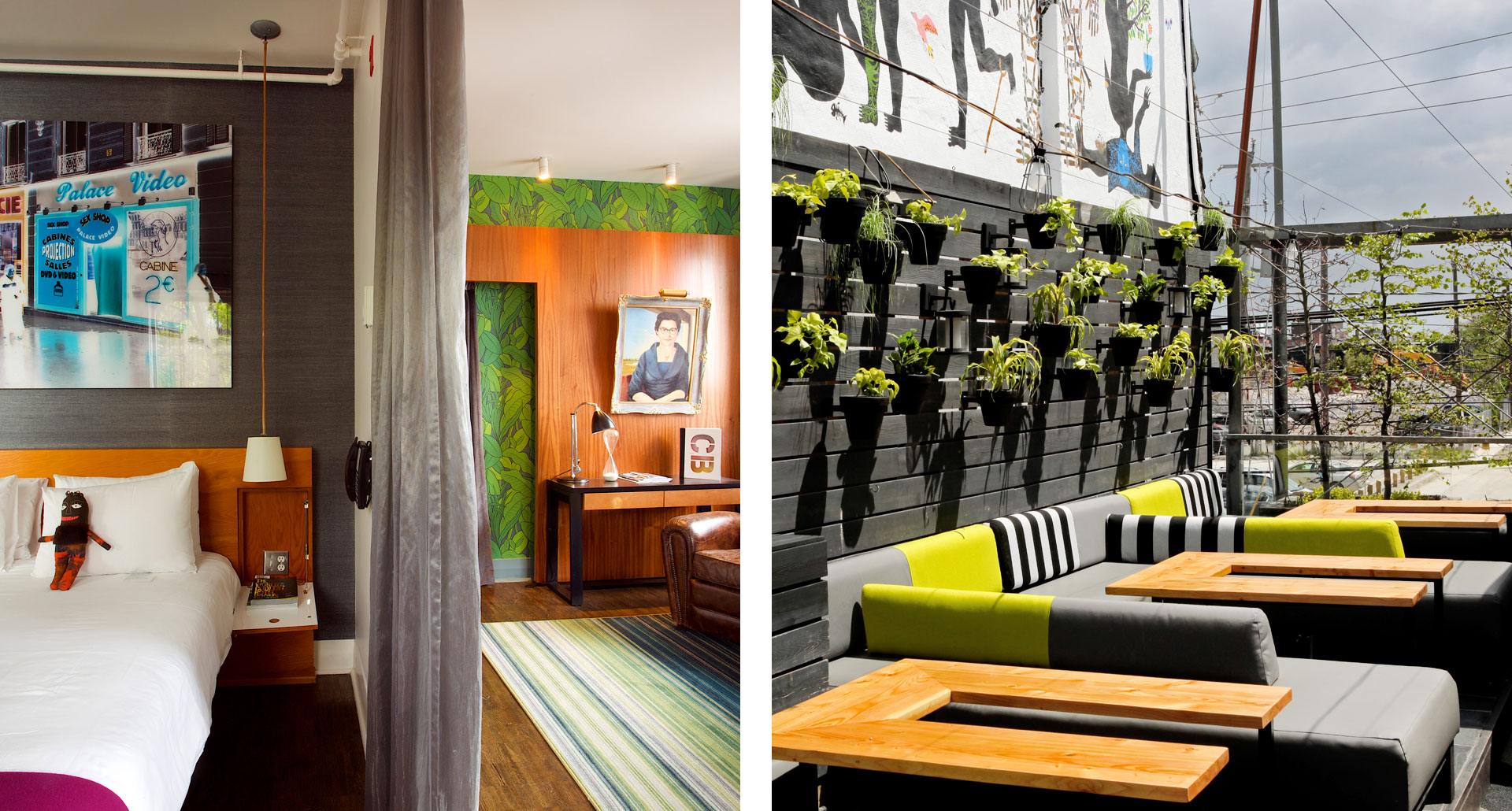 The Drake — at the edges of Toronto’s Parkdale district — probably isn’t your first choice of location for “doing” the city as we’ve described above. But once you’ve got a sense of the city in general, this stylish boutique is the perfect jumping-off point for an exploration of the city’s arts scene. The downstairs performance space plays host to all manner of acts, musical and otherwise. 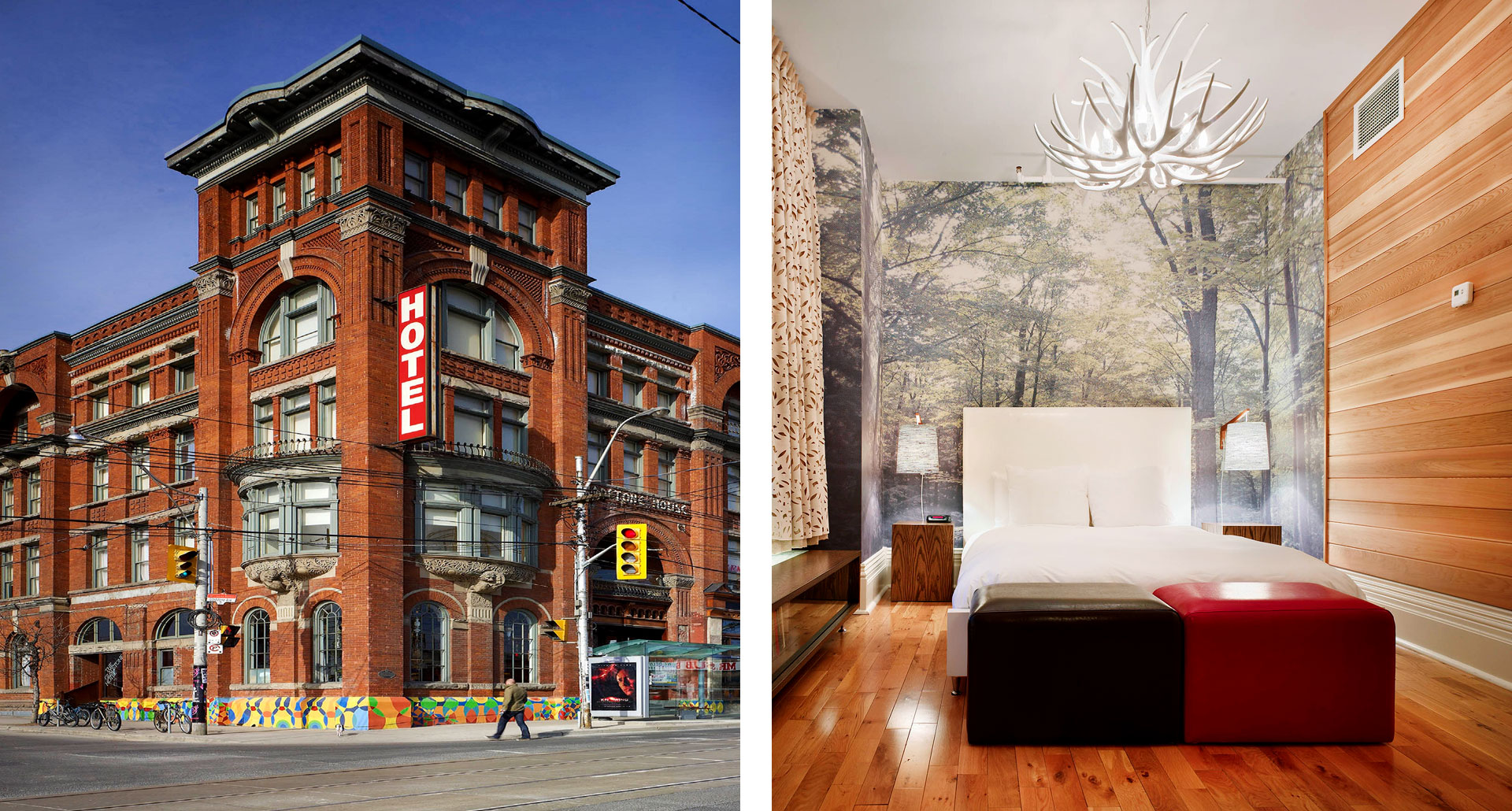 Rustic or retro, whimsical or modern, each room in the Gladstone is comfortable, not to mention unique. Each was decorated by a Canadian artist, and given its own name to reflect its status as an original work of art. And if you’re looking for nightlife, look no further than the hotel’s own bar and event space. 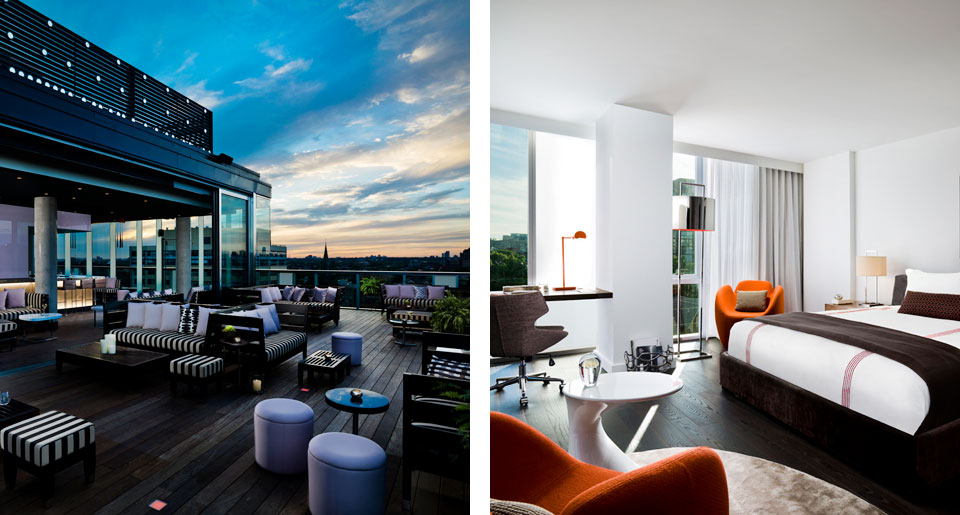 In one of Toronto’s hottest neighborhoods, the bright, sunny Thompson hotel would rank among the hippest in any city, thanks at least in part to its Studio Gaia design. Then there’s the rooftop bar and three restaurants — one modern interpretation of a diner, one high-end Italian, and one sushi – which fit right in among Toronto’s effusive multiculturalism. 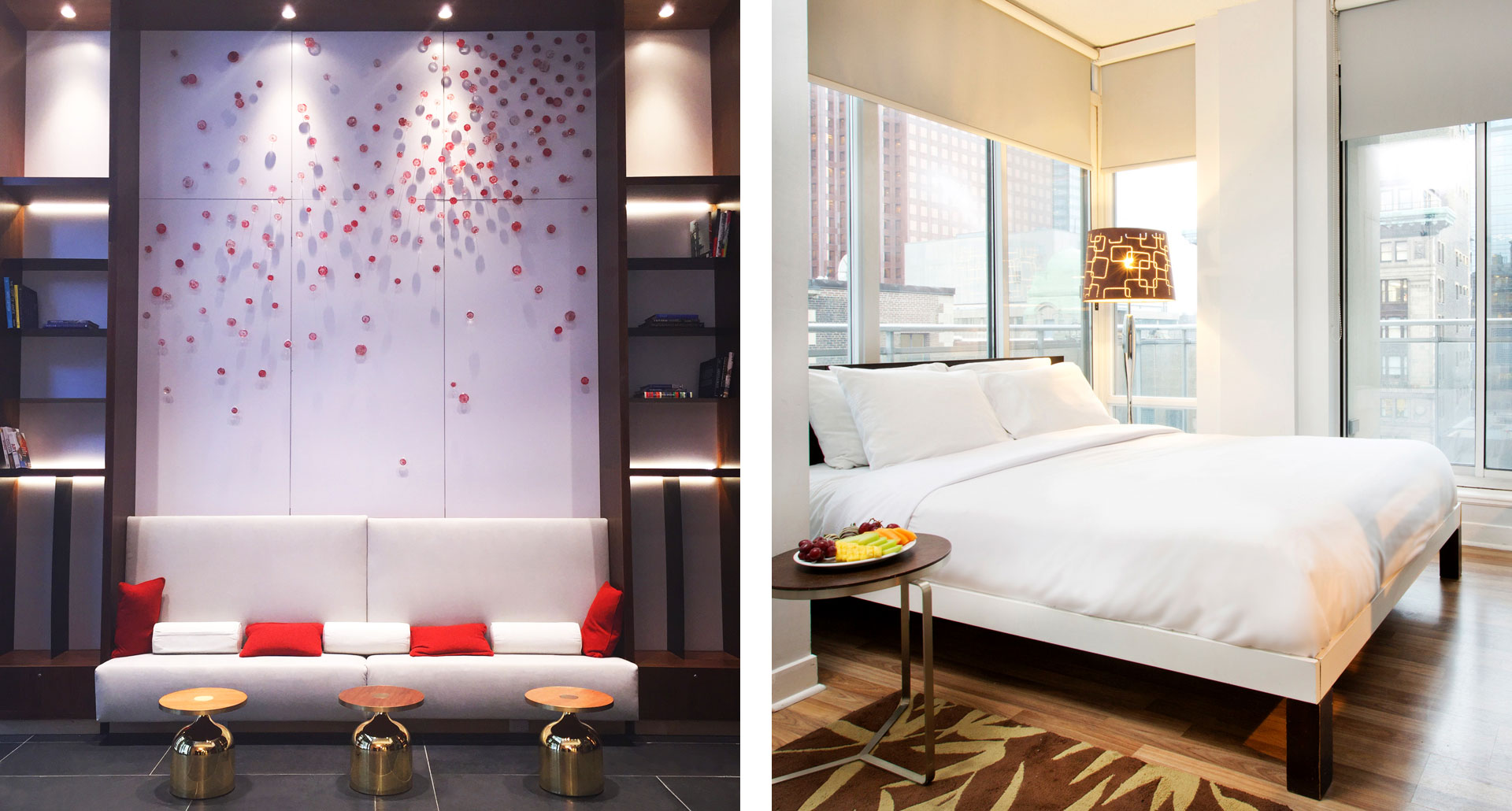 Right in downtown Toronto is a truly restful business hotel. The Executive Hotel Cosmopolitan is a uniquely calming place, one with an intentional Zen concept belied by earthy tones and clean lines, yoga mats and bamboo slippers.

See all of our hotels in Toronto.