The city of Cusco: known for its lively nightlife, its status as one of the oldest cities in South America, and as the capital of the Cusco Region in Peru, just as it was the capital of the Inca empire. Maybe you’re here for pleasure, maybe you’re here for business. Who are we kidding: you’re here for Machu Picchu. But don’t move too fast through Cusco, least of all because you’ll get altitude sickness (the elevation is 11,152 feet here — and it’s recommended you take it easy while you acclimate). There’s a whole lot to see.

Here’s where to begin in Cusco:

IF YOU WANT A CENTRAL JUMPING-OFF POINT:
Like other cities in Latin America, the default location for travelers in Cusco is its central square, the Plaza de Armas. Get your bearings here. The impressive Catedral del Cuzco and the Iglesia de la Compania both preside over the square, and both are worth a viewing, while it’s said that ancient Incan walls line the street of Loreto. The plaza’s also in walking distance of the renowned Museo Inka, spitting distance of the famous club Mama Africa (warning: don’t drink if you’re still getting used to the altitude), and a ten minute ride from Planetarium Cusco, a great place to start learning about Incan astronomy. As you’ll soon see, there’s no better reference point in Cusco than the Plaza de Armas.

IF YOU EAT ONE CUTE ANIMAL:
Sorry. But make it cuy, also known as guinea pig, the famous Peruvian delicacy, usually roasted or fried. The old adage “tastes like chicken” might not be appropriate here, as it’s considered more tender. One chef described it as something like “pork combined with rabbit.” If you had a guinea pig as a childhood pet and you still want to try a famous local dish, you could go with an alpaca steak instead (alternatively, you could try some dried alpaca at the acclaimed San Pedro Market). Or, if you really want to cop out, go with lomo saltado (beef stir fry) or pollo a la brasa (the beloved, greasy rotisserie chicken) found at pollerías all over the city.

IF YOU GO TO ONE PLACE IN THE SACRED VALLEY:
We said there’s more than Machu Picchu in the Cusco Region, but that doesn’t mean we have anything against Incan ruins. In fact, we strongly recommend checking out Pisac. The village, a bit over 40 minutes from the city, is known for its hippie vibes and crowded but enticing Sunday market. But what makes the area especially noteworthy is the series of ruins spread along the mountain — some of the best preserved in the country. Extensive agricultural terraces, a temple, and a cemetery are among the sites, which you can see via a rather extensive hike or a rather easy taxi ride. You’re going to want to look around the valley’s northern town of Ollantaytambo, too, but you will likely stop there on your way to Machu Picchu.

IF YOU WANT TO SEE RUINS IN THE CITY:
Sacasayhuaman, which no one will miss the opportunity to tell you is pronounced along the lines of “sexy woman,” is another walkable site from the Plaza de Armas. An Incan fortress on a hill with sweeping valley views and mesmerizing stone masonry, the history is fascinating if you spring for the guided tour. Even closer to Plaza de Armas is Qorikancha, the Temple of the Sun that was ransacked by conquistadors, who promptly built their convent of Santo Domingo on top of it. An unmissable stop in Cusco.

IF YOU CHECK OUT ONE NEIGHBORHOOD:
Go to San Blas. It’s not far from Plaza de Armas, the sturdy center of our compass, although the steep climb might make it feel like it is. And to the extent that every city has a “bohemian” part of town, a byword for the hipster area, this is Cusco’s. It’s the perfect area for the tourist headed nowhere in particular, who just wants to wander the streets and peer around. Bars, restaurants, cafes, and plenty of original, boutique craft shops line the streets here, as do art galleries and ceramics shops. Poke your stomach into Jack’s Cafe if you’re a homesick westerner.

Cusco is unlike any other destination, and the hotels featured on Tablet are unlike any other hotels. You know where to start when it comes to unique local attractions — now it’s time to discover where you should stay. 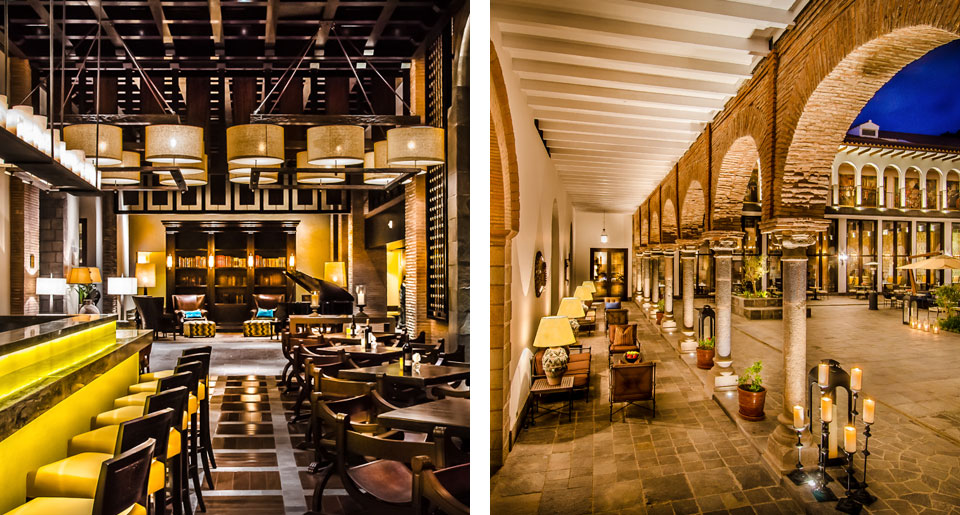 You could hardly ask for a more quintessentially Cusco abode. A five-minute walk from the Plaza de Armas, the JW occupies the site of a 16th-century convent, itself built atop centuries-old Incan ruins. The rooms are well-designed, the service professional, and all the usual luxuries accounted for. Everything you’d expect from the Marriott’s luxury boutique line. 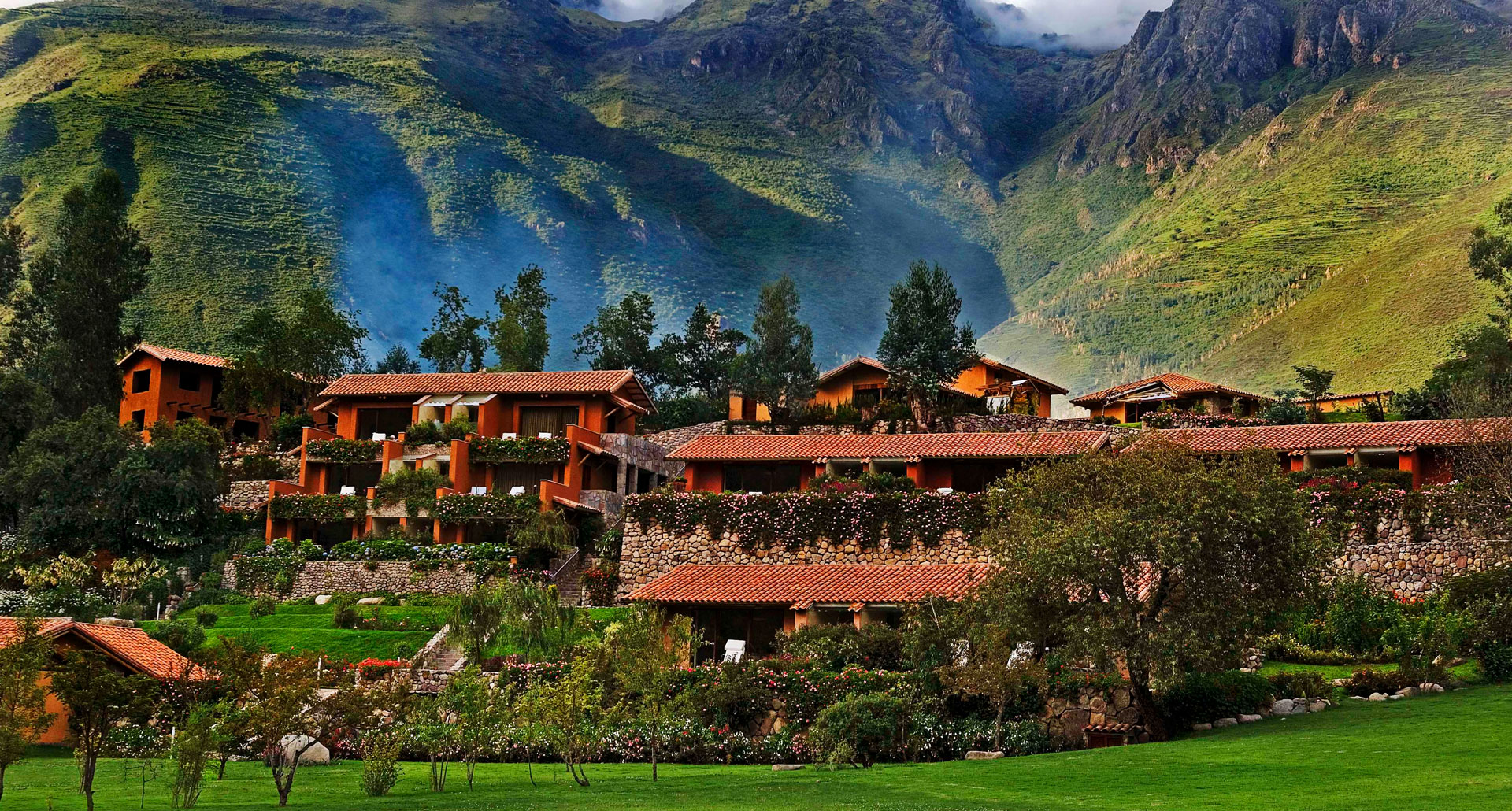 With views overlooking the river running through the Sacred Valley, needless to say this is the perfect place to start your exploration of the ruins in towns like Ollantaytambo, on your way to Machu Picchu. Its 19 rooms, all patterned after a traditional Andean village, are meant to blend into the landscape. For that matter, when you’re here, so are you, with a carefully engineered view of the valley replacing the television in your room. 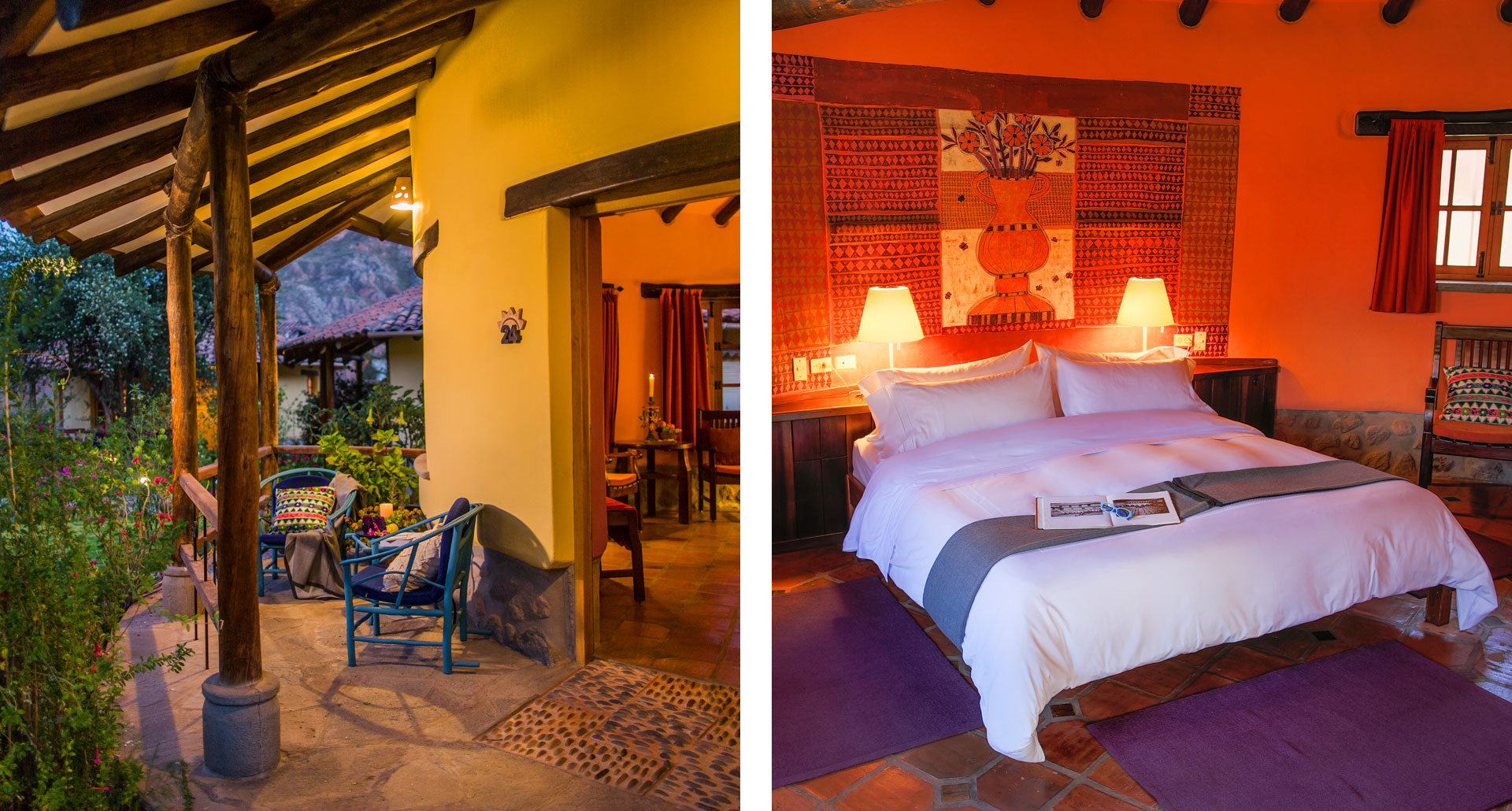 Another great option on the way to Machu Picchu, Sol y Luna pays architectural homage to ancient Incan construction, with low-lying bungalows built with clay walls, native stone, and locally made beams and bricks. The inside is quite the opposite — marble-tiled bathrooms, sound systems, and wi-fi. Most importantly, perhaps, are the luxurious sheets for your relief after a full day of hiking. 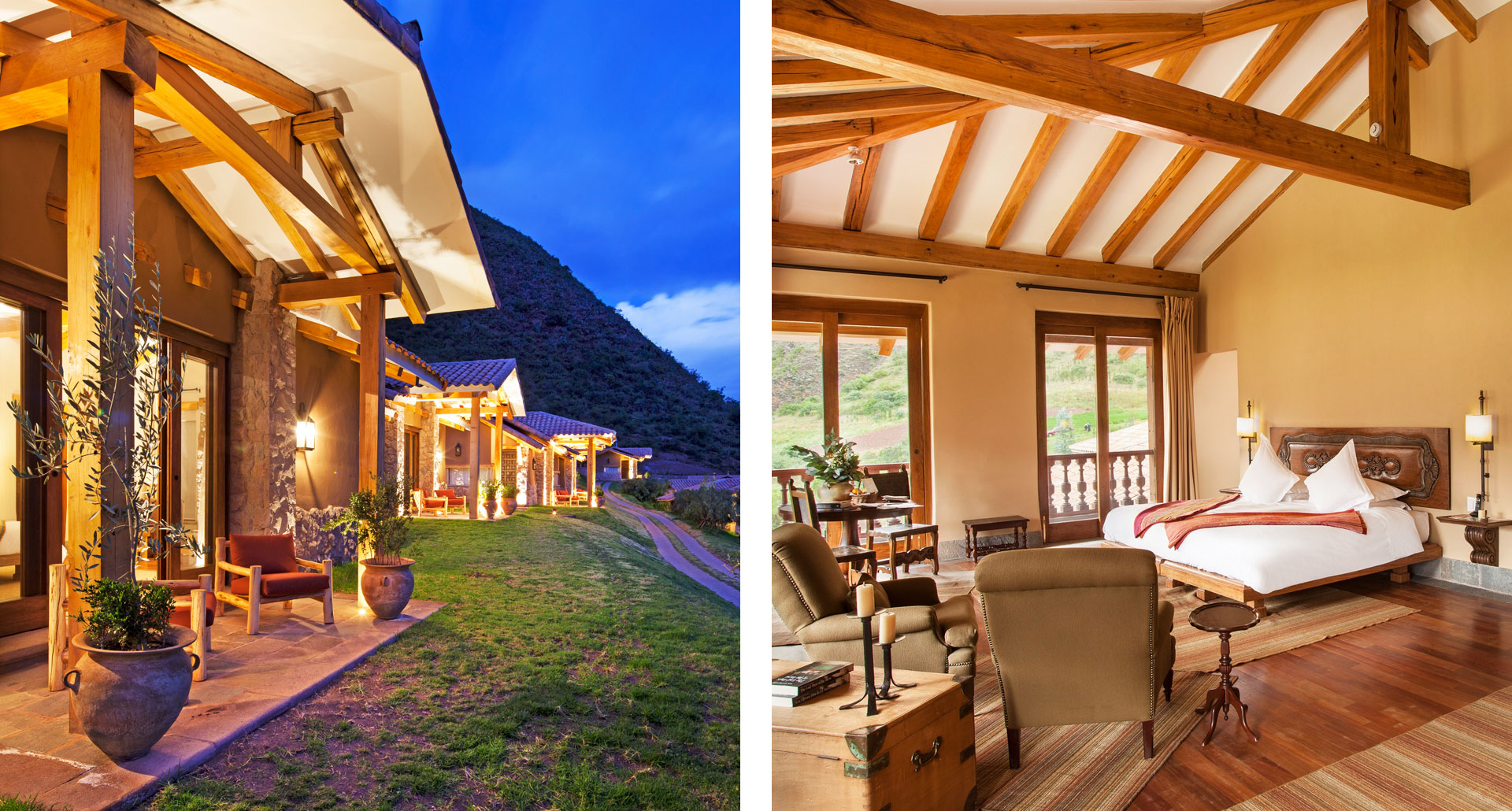 Hotels like Inkaterra are as sustainable as they come — this one grows its produce via zero-carbon methods. But sustainability coexists here with top-flight luxury, allowing you to enjoy heated floors, down duvets, and modern electronics while you overlook that ineffable Sacred Valley. 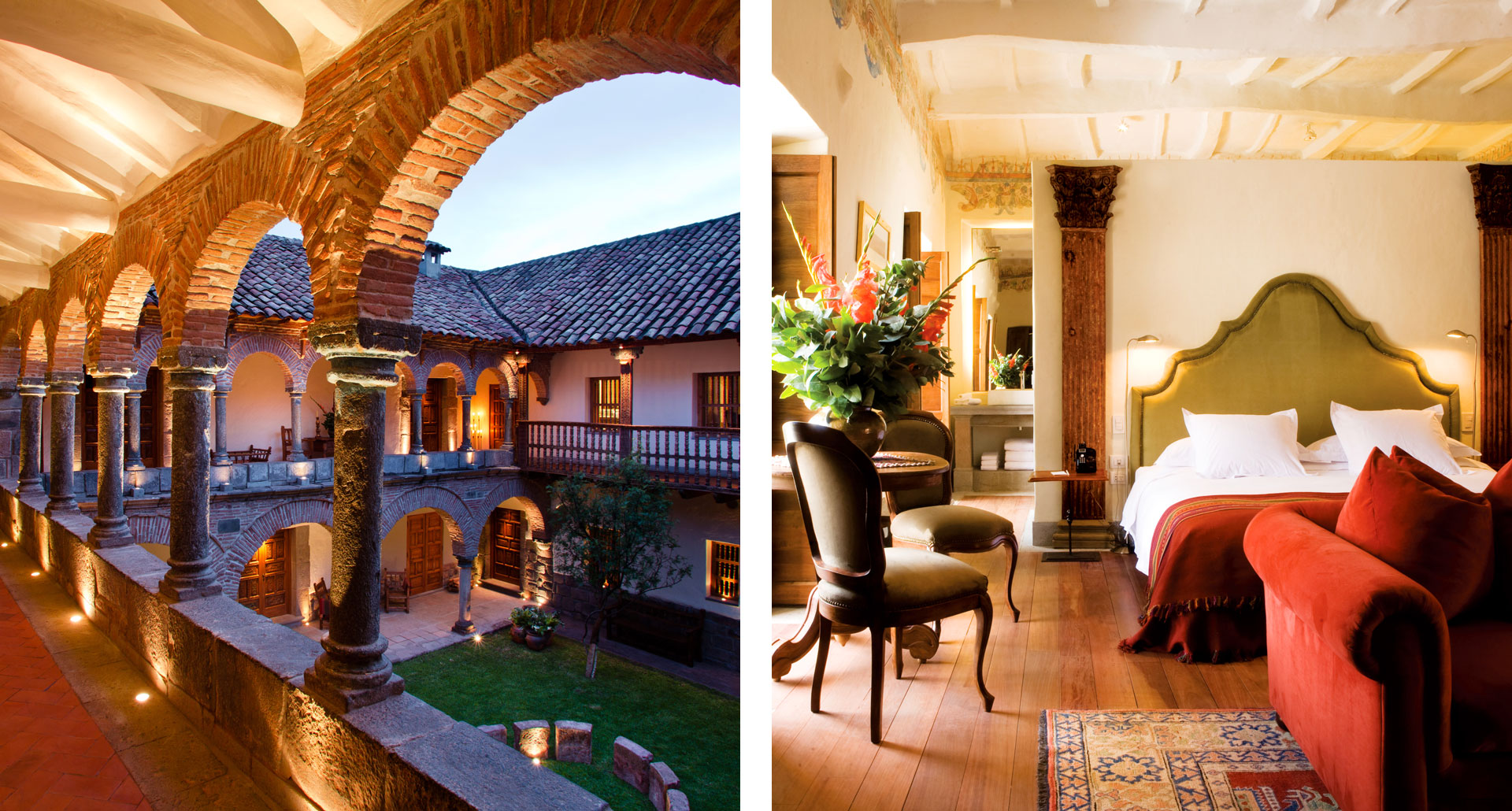 Small enough that a group of friends could book this gem in the heart of the city themselves, Inkaterra La Casona is nevertheless large enough to feature perks like massages, spa treatments, or private guides for Andean excursions.

See all of our hotels in Cusco.