Sometimes you just want to see a bunch of amazing hotels on the edge of incredible cliffs high above gorgeous blue waves. We’re happy to oblige.

Last week, we asked you to figure out what a seemingly random collection of hotels had in common (spoiler alert: it was libraries). This week, you have to do a lot less work, and the only book you’ll need to think about is which one to read on your private patio at one of these awe-inspiring clifftop hotels. A wise man once said, “the ocean looks cooler from up high than from down on the beach.” We couldn’t agree more. Enjoy the view. 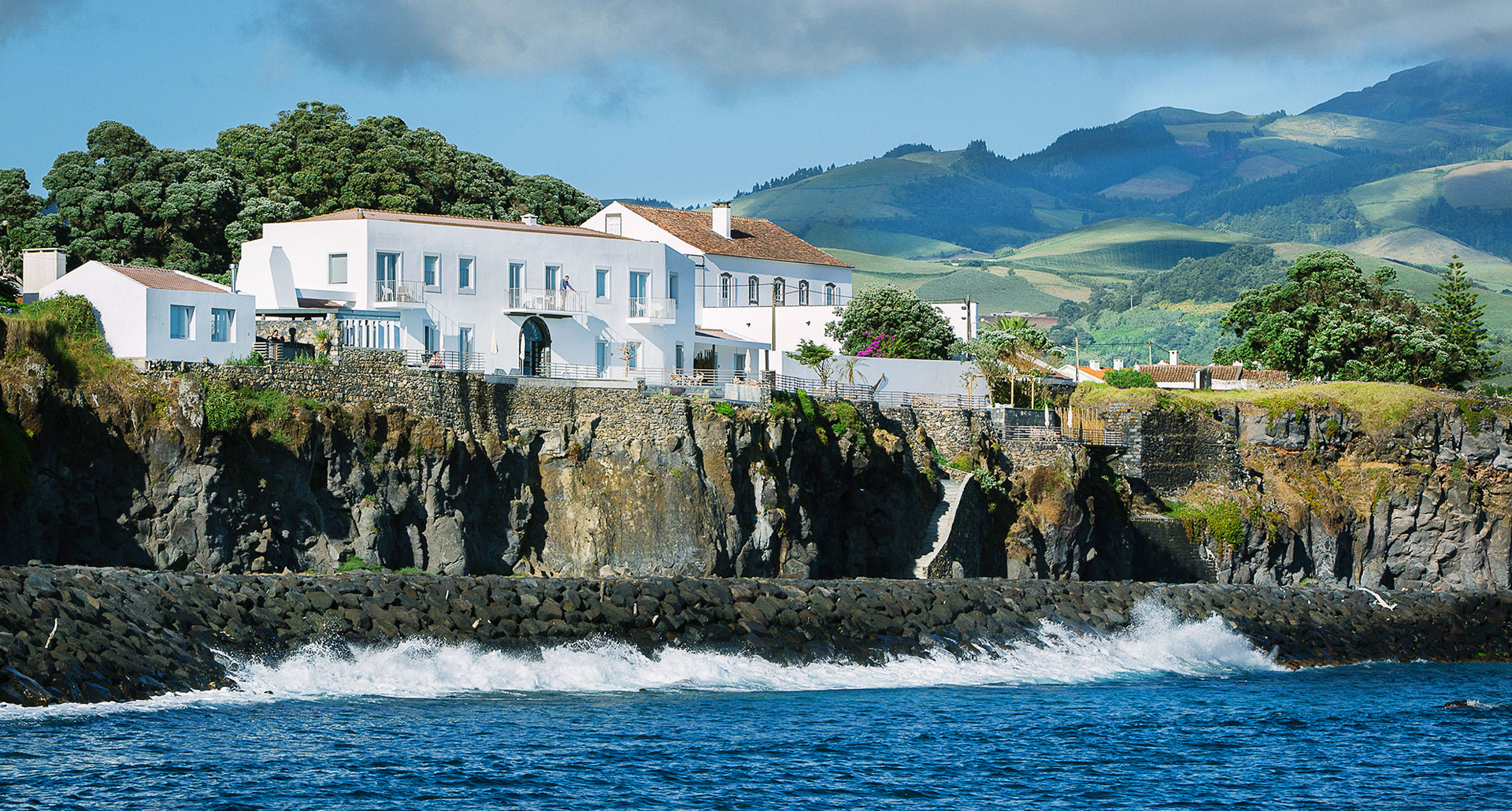 The Azores are a mere speck of a place, battered by the mighty Atlantic Ocean, and it’s no surprise that driftwood features heavily in the interiors at White Exclusive Suite & Villas, as its cliffside location means the pounding of the surf is never far from your mind. 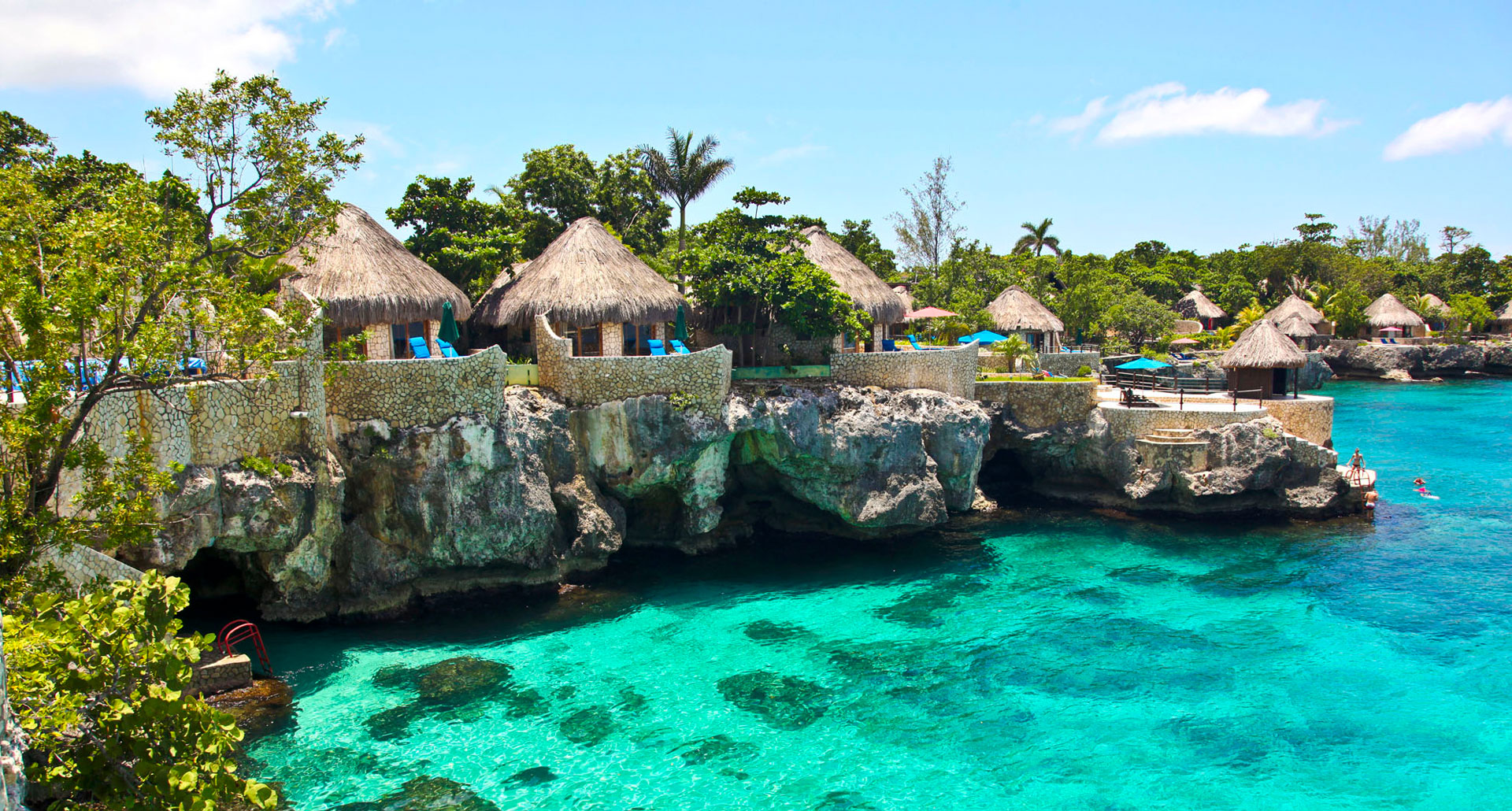 The parcel of land occupied by the Rockhouse is literally Jamaica’s westernmost point, and it’s possible you’ve never seen a proper sunset until you’ve seen one here — and there’s no better way to do it than from a villa that practically hangs over the waters of the aptly named Pristine Cove. 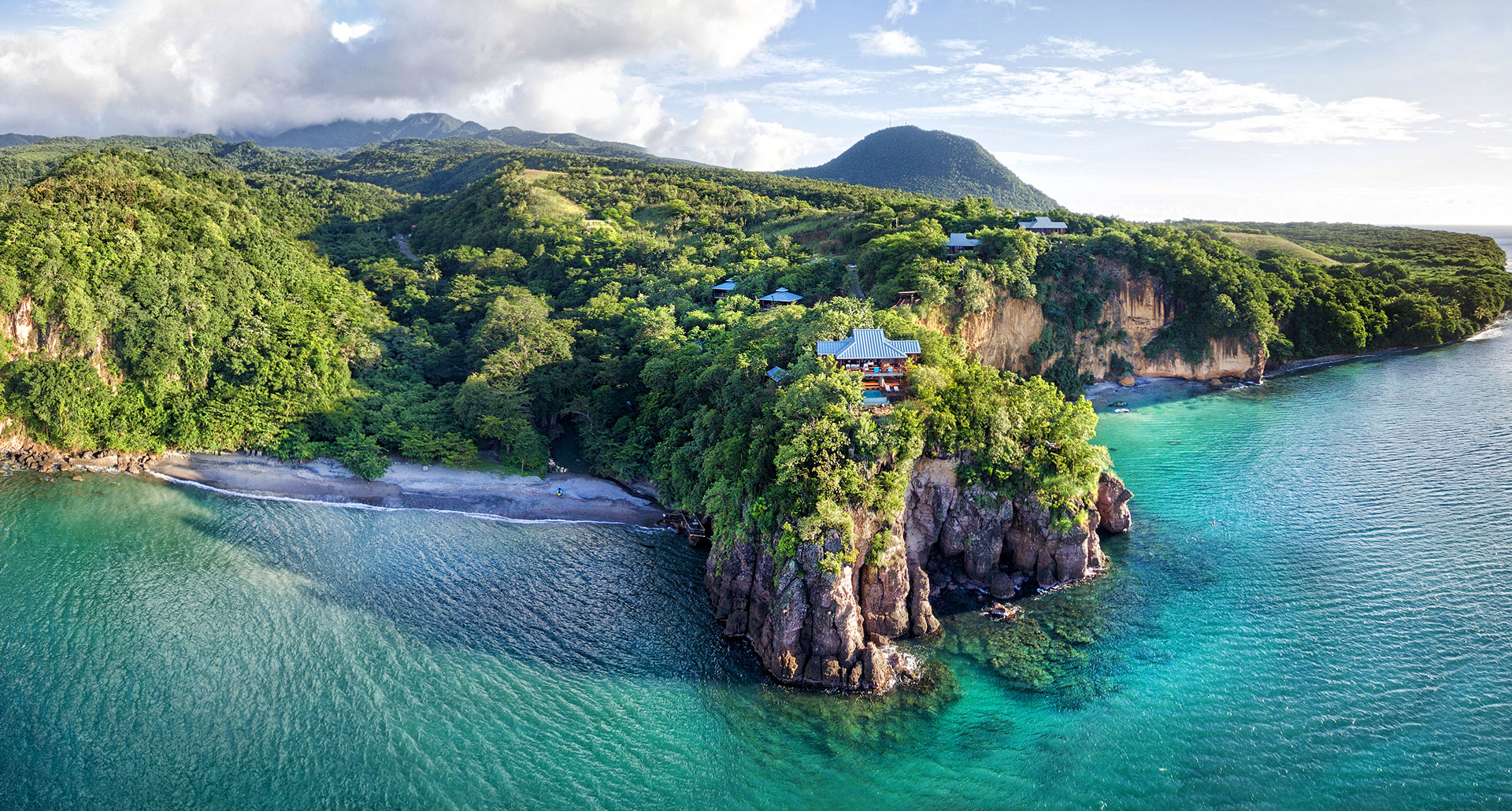 If you want to stay at a resort with three infinity pools and five restaurants, go to Barbados or Anguilla. If you want to hike through the rainforest and meditate at dawn on a treetop platform and sleep in a clifftop bungalow sustainably built with native tropical wood, you go to Dominica, nicknamed “Nature Island,” and check into Secret Bay. 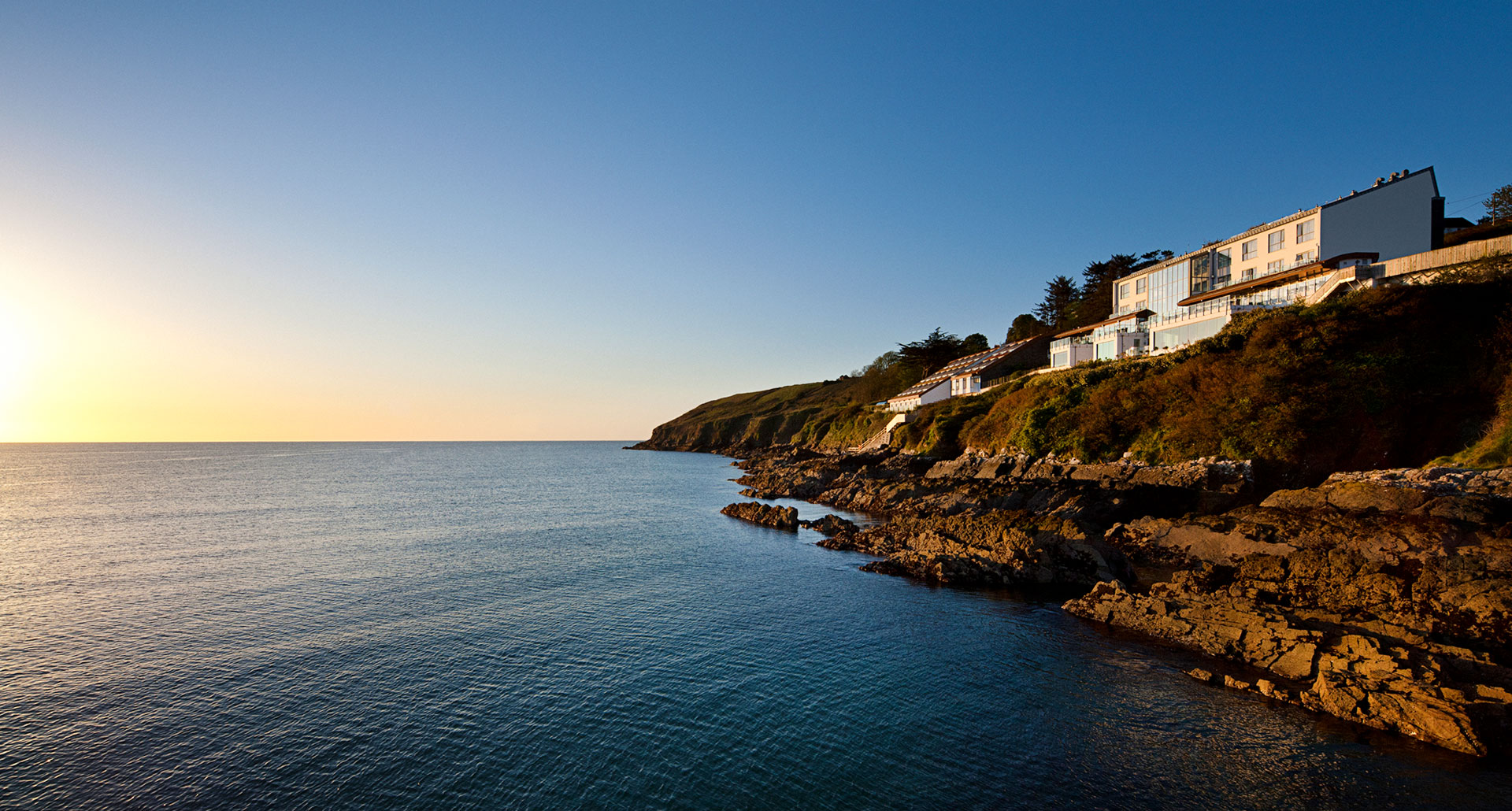 With a name like that, you knew it had to make this list. Modern architecture and Irish hospitality are two categories whose Venn diagram features a fairly small overlap. But a look at the view from the Cliff House Hotel’s indoor pool will make a convert out of the most die-hard traditionalist. 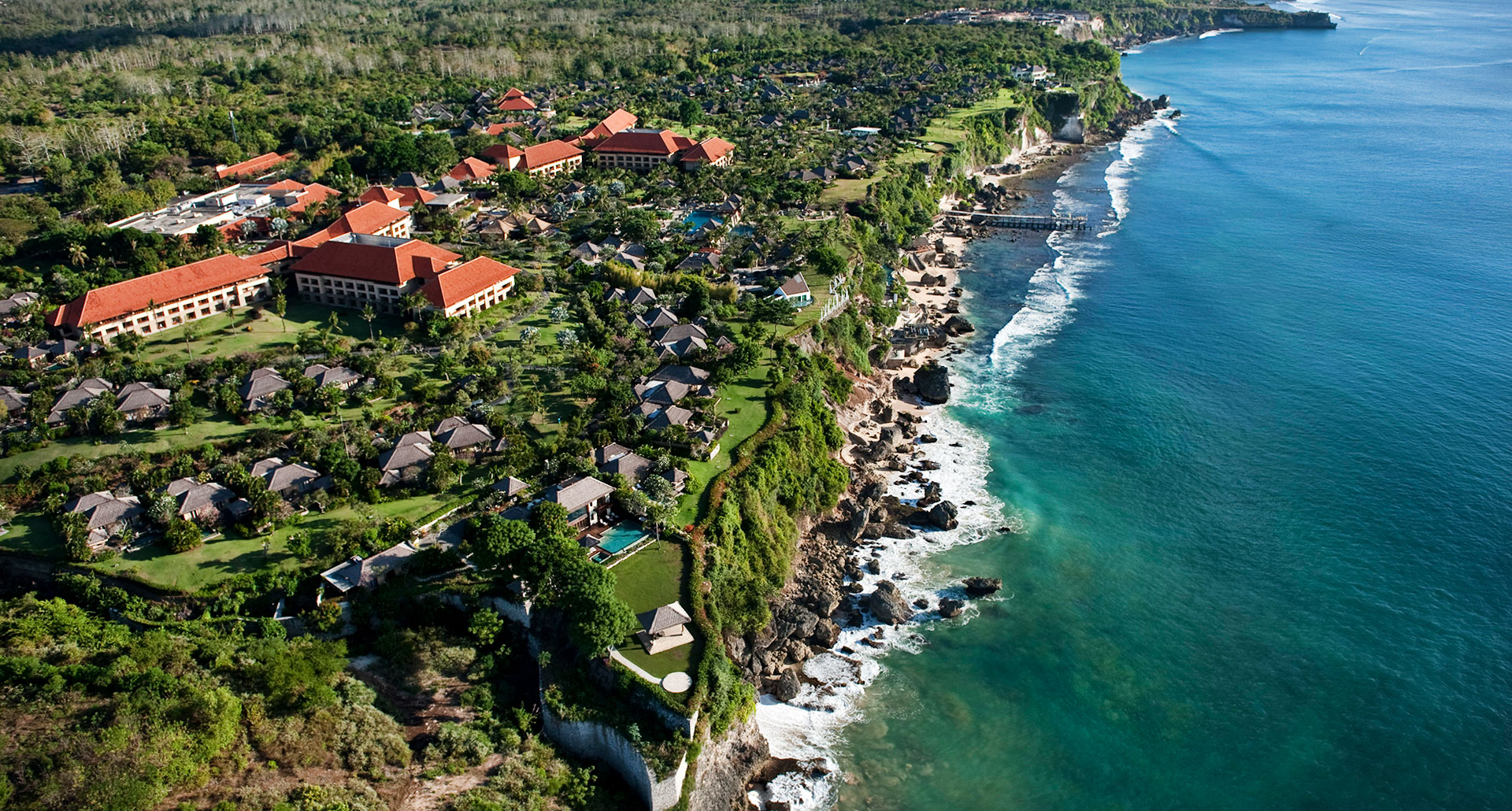 Not much unexplored territory remains here in Jimbaran, the South Bali version of Beverly Hills, where impossibly luxurious villas crowd one another for that coveted sunset perch. So they looked inward, capitalizing on over 220 clifftop acres to set aside this portion — just as lofty, just as replete with botanical wonders, and just as spectacular, especially around sunset. 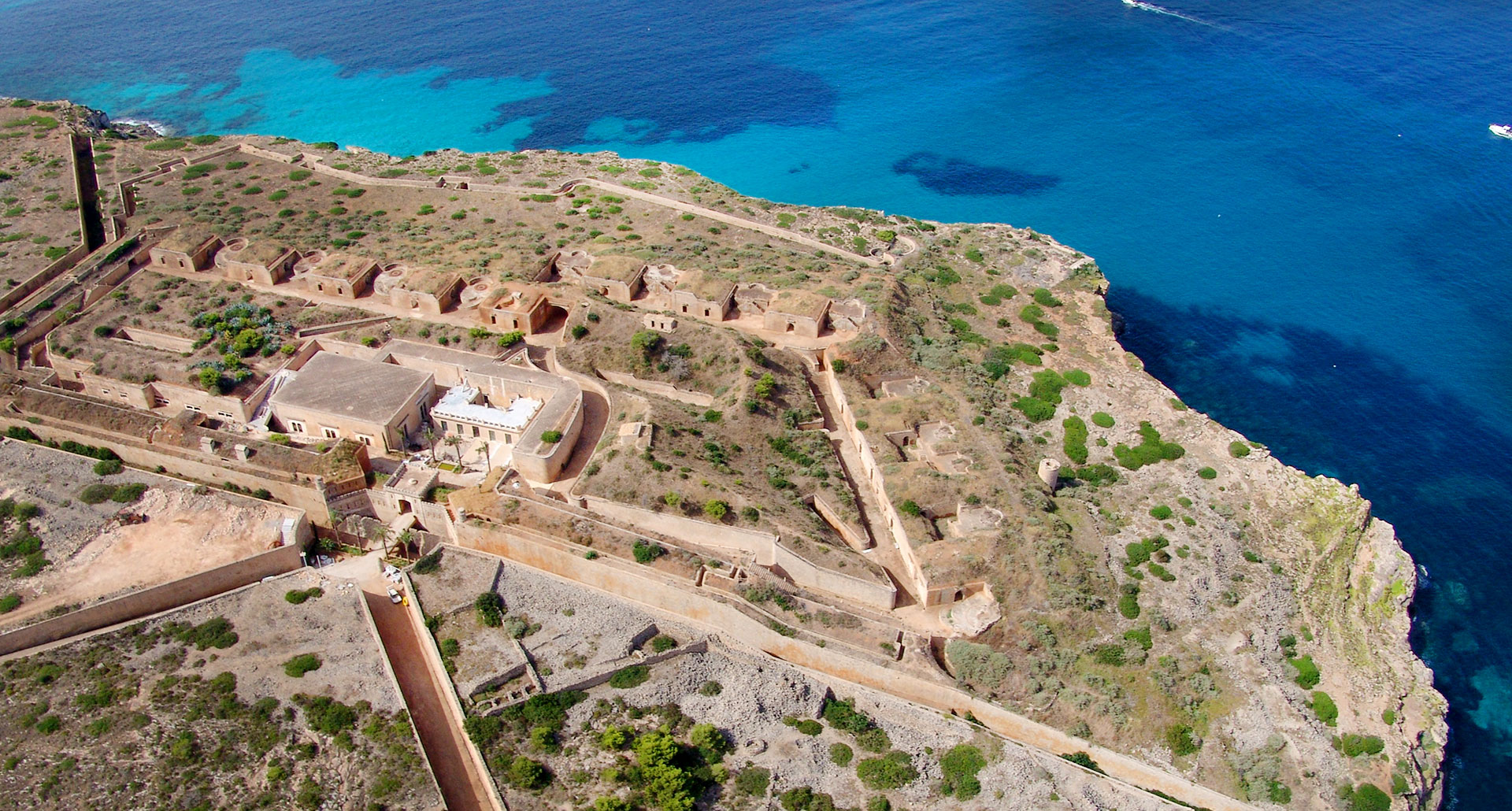 After extensive work from the Spanish architect Antonio Obrador, this reconstructed 19th-century fortress is now a boutique hotel with a truly unique personality. The cuisine is fresh and local, and this being Spain it’s one of the highlights, but the greatest pleasure at Cap Rocat might just be taking up a post and keeping watch over the bay. 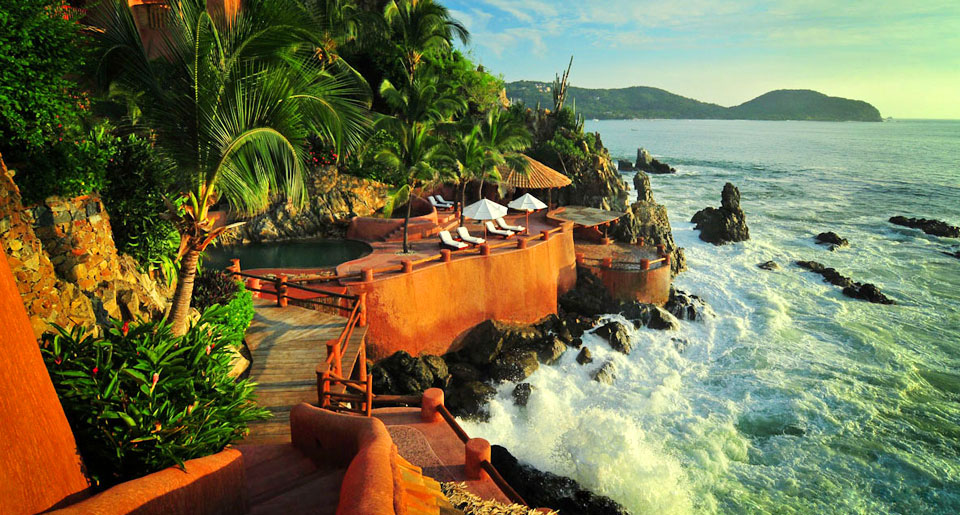 Zihuatanejo, just four miles down the coast from Ixtapa, was until recently little more than a quiet fishing village. La Casa Que Canta sits high over the water, cut into a hillside above Zihuatanejo Bay, offering an extraordinary sea view as well as a splendid sense of seclusion. 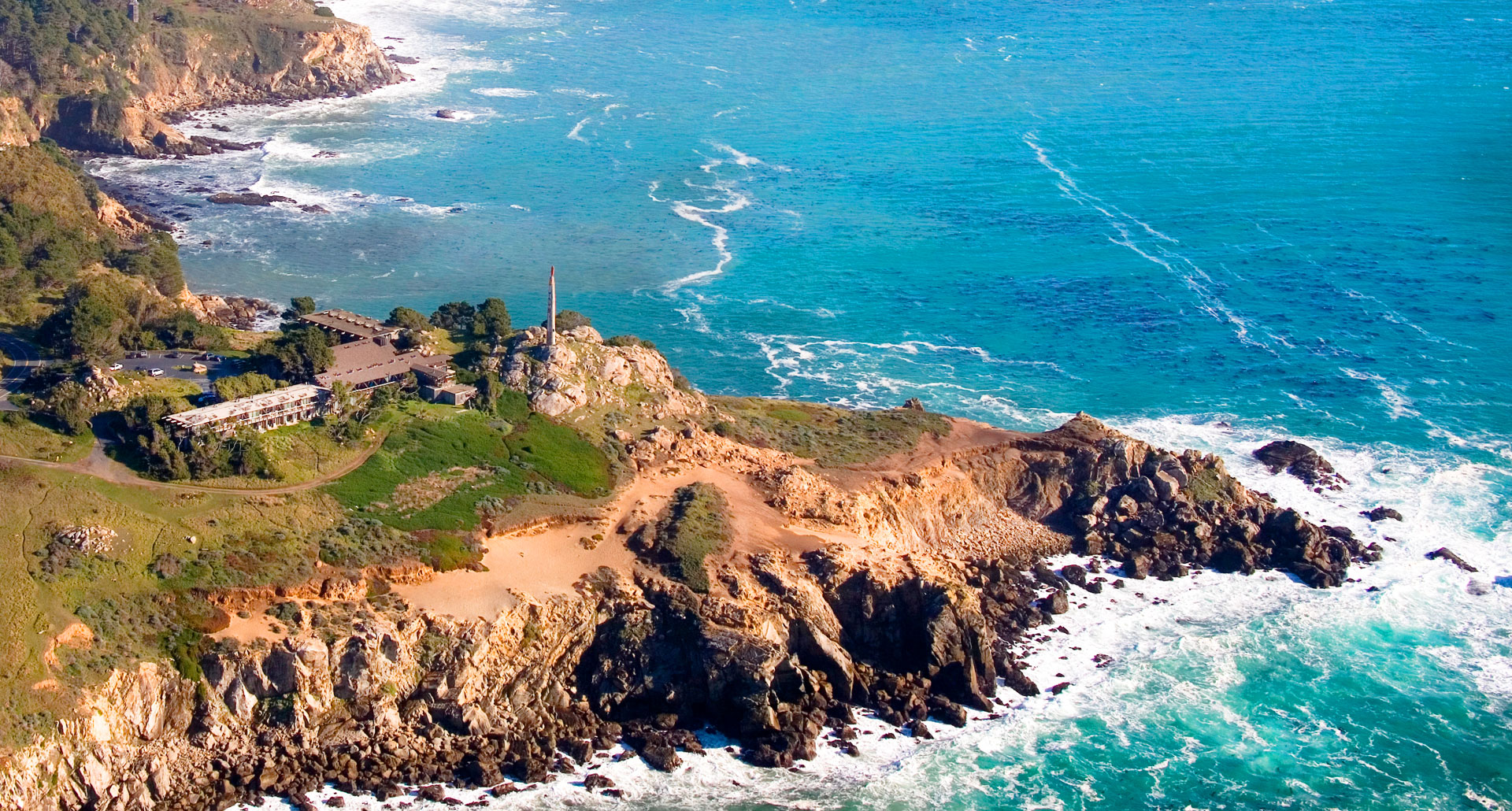 The Sixties-era Timber Cove, built of native redwood and stone, was originally conceived as a meditation lodge. After thorough renovations in 2016, it’s more rustic-chic than strictly rustic — in-room amenities include modern record players, yoga mats, and organic bath products — but it’s still as peaceful as ever. 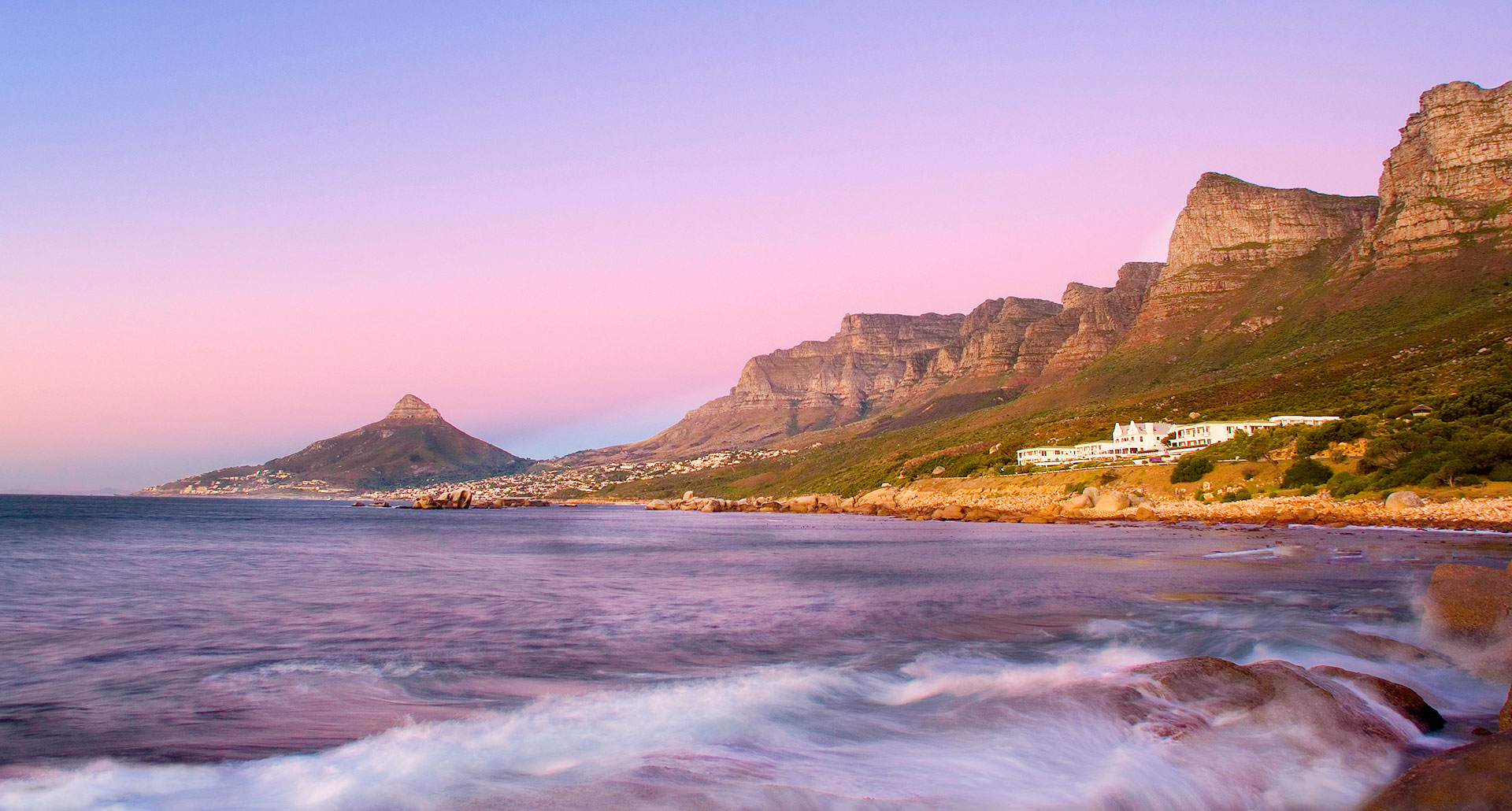 Sandwiched between the mountains of the same name and the rocky Atlantic coast, Twelve Apostles is nevertheless the kind of hotel you expect to find in the city center, not well outside of town in such a picturesque setting. It’s just two stories high, low along the rocky coast, and many rooms have nearly an entire wall made of glass — so the view is simply blue sky and blue sea. 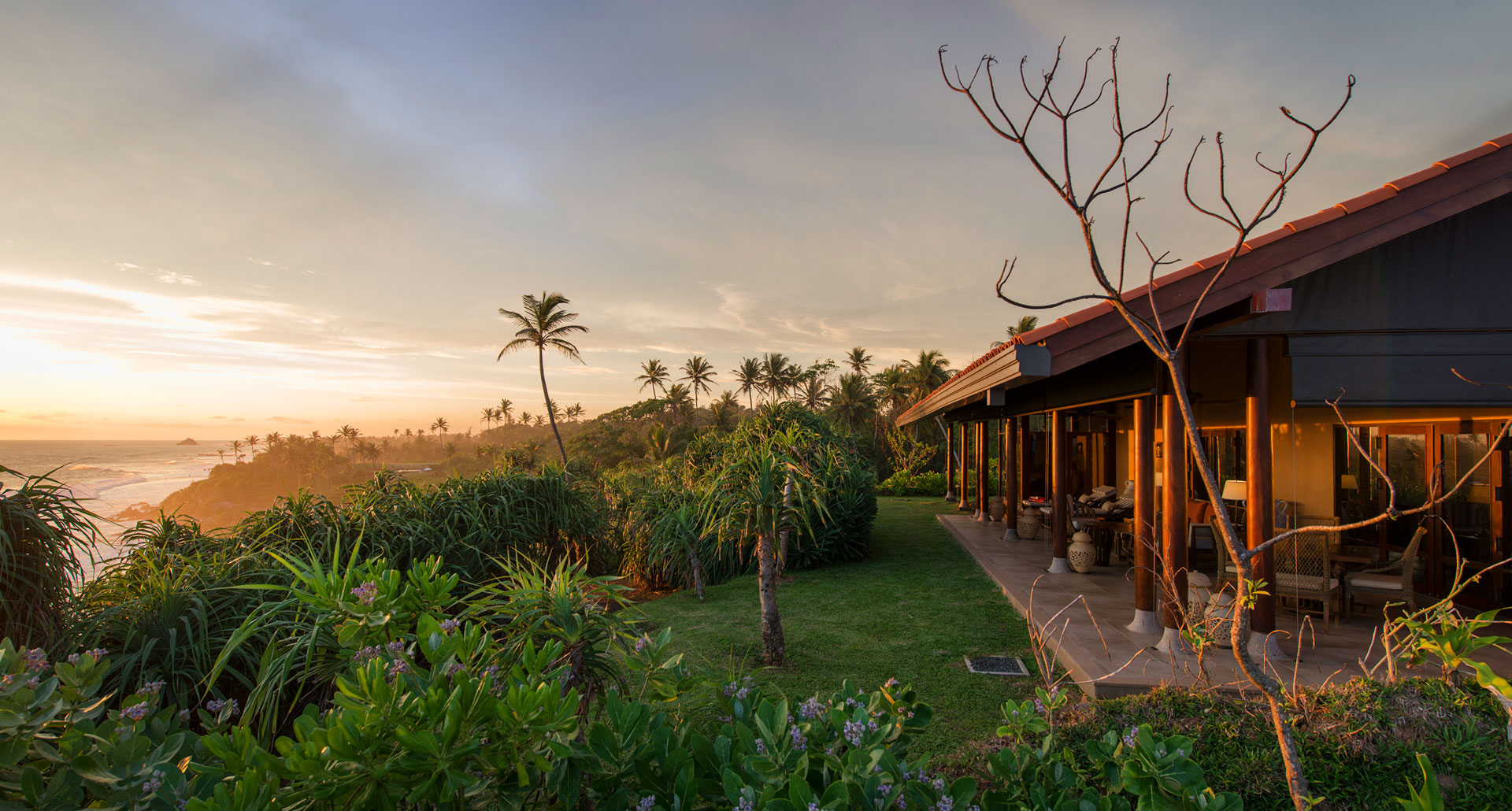 Here the Thai architect Lek Bunnag took inspiration from Sri Lanka’s long history as an explorers’ waystation, incorporating elements from the island’s pre-modernist history in this classic-contemporary resort. Cape Weligama is set on 12 acres of terraced clifftop real estate, a hundred feet above the Indian Ocean, which, as you may well imagine, is not at all bad for the views. 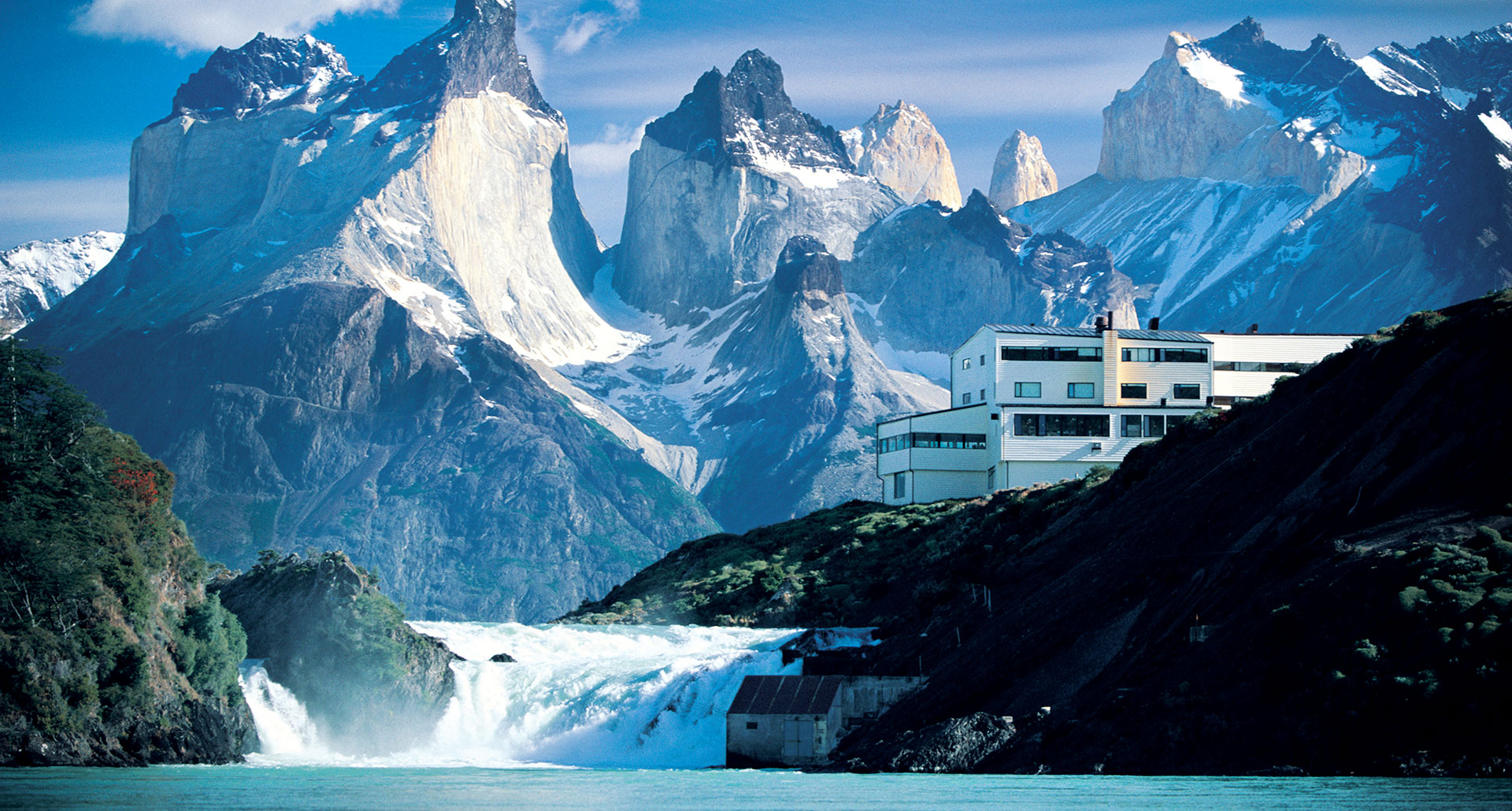 This modernist lodge stands just yards from the Salto Chico waterfall, with the peaks of the Paine massif looming just behind. So the fifty rooms and suites do their best to feel cozy and inviting. There are some self-consciously rustic touches, as well as some clean modern lines, but above all, the views predominate — interior design, in this environment, is somewhat secondary. 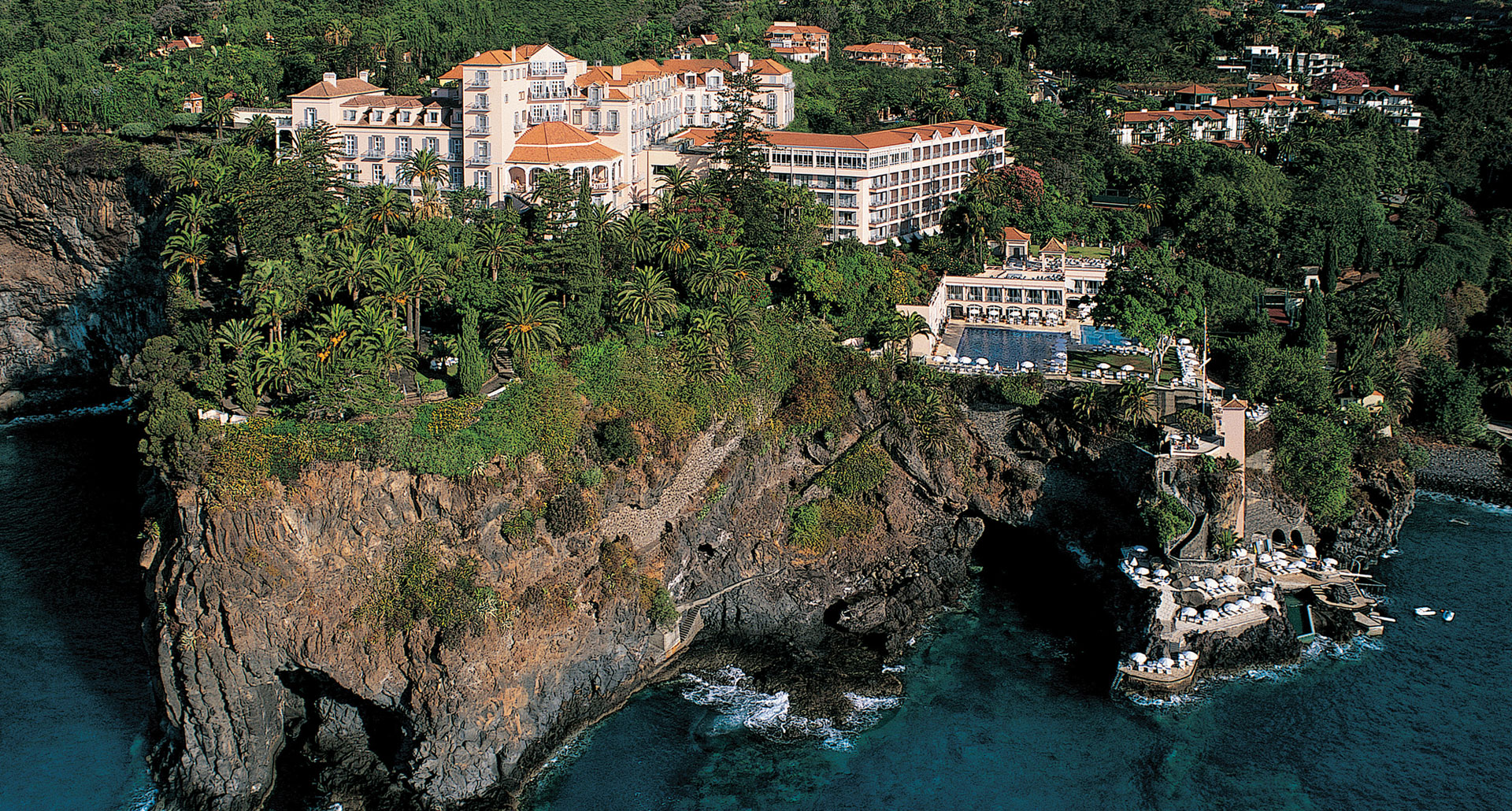 A massive renovation might have set nerves on edge among Reid’s regulars, but this grand old palace on the terraced hillside above the Bay of Funchal has come through with flying colors. Nothing essential was disturbed in this listed landmark; the classic guest rooms have been modernized in function, if not in style, and the twin swimming pools now boast infinity edges to make the most of the bay view. 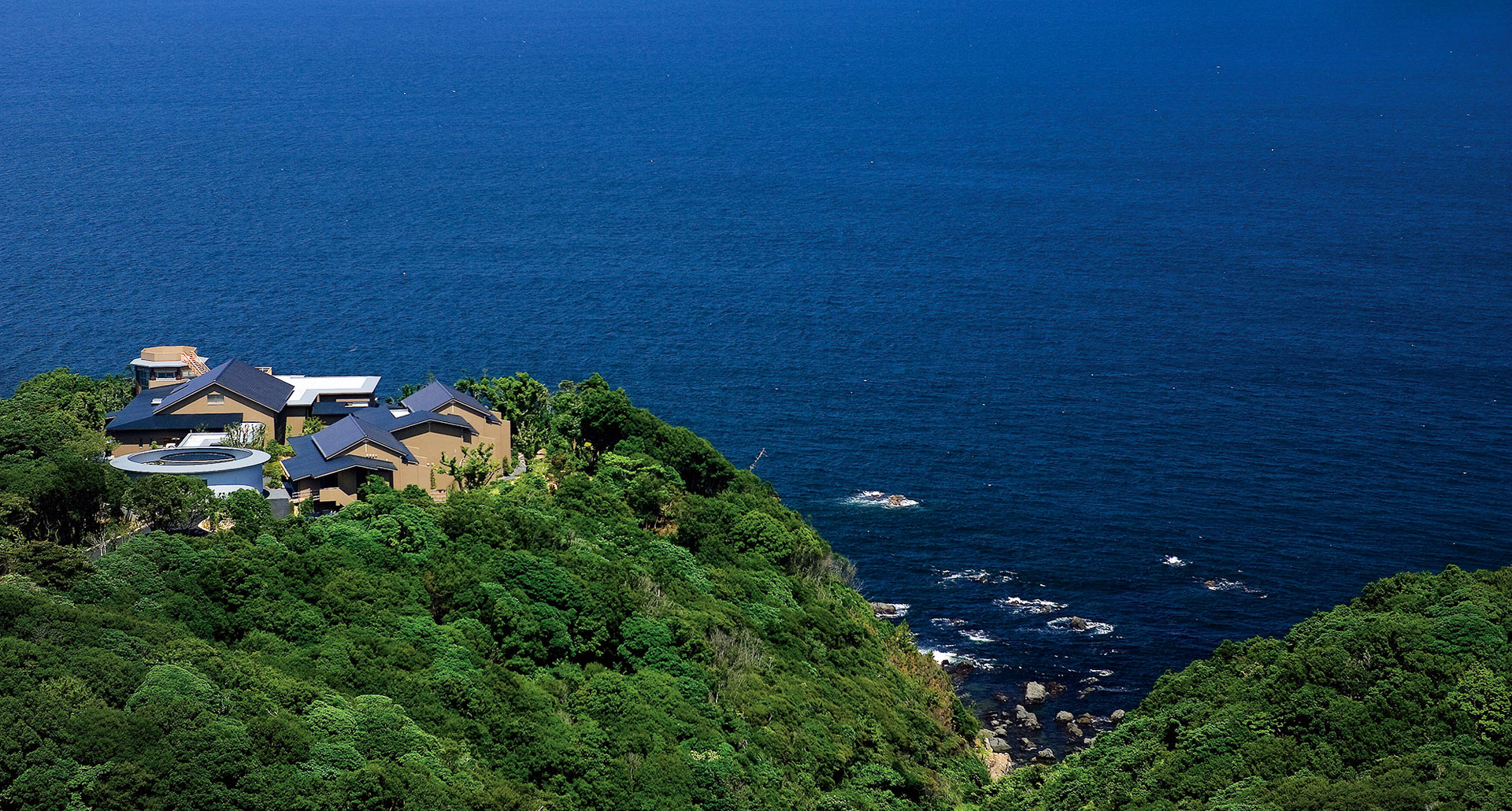 It’s almost impossible to overstate how central the onsen bath is to the ryokan experience, a point which is underlined rather forcefully by a stay at The Earth, a sixteen-suite inn on the Pacific coast near Toba City, within the Ise Shima national park. It’s aptly named, as the immersion in the natural environment is near-total — surroundings include primeval forest, Toba Bay, and the islands in the middle distance. 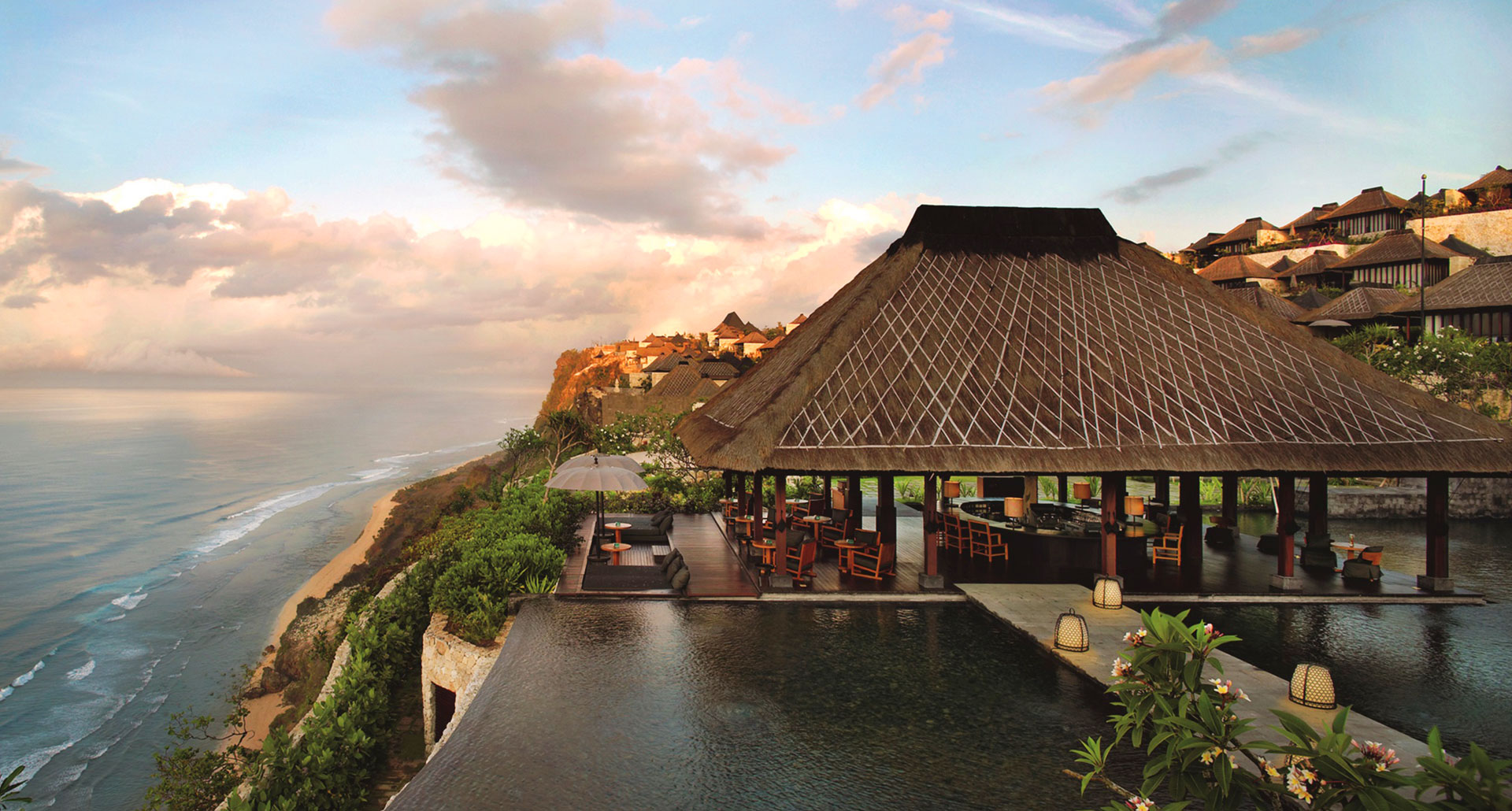 Villas cascade down the terraced hillside, topped by thatched roofs, their interiors decorated in a style that’s at once traditional-Indonesian and modern-Milanese. The Italian designer Antonio Citterio’s clean lines practically define contemporary elegance, and for dramatic edge-of-the-world landscape you could do a lot worse than southern Bali.