You’ve probably heard of Belize. Adventurous travelers have long raved about the many modes of paradise it makes available to visitors. They weren’t kidding.

Our pick for 2017–18’s top winter getaway is Belize. For years, adventurous travelers have championed its many virtues, speaking of it with a wide-eyed, almost mystical reverence. Still, most people aren’t even sure exactly where in the world it is, they’ve just heard that it’s a uniquely special place. What they’ve heard is true.

Located just to the south of Mexico’s Yucatan Peninsula, Belize is equal parts Caribbean and Central American, offering an astonishingly lush mainland and a vast network of postcard-perfect island beaches. Perhaps no other country on earth is so well positioned — due, in part, to its relatively modest size — to satisfy both a thrilling plunge into jungle archaeology and a white-sand layabout among countless cayes and atolls. Whichever side of paradise you prefer, the best part about Belize is that it’s mostly under the radar for the jet set, and even the residents aren’t numerous enough to comprise a crowd. For now, and hopefully for decades to come, Belize belongs almost entirely to nature.

If you know us at all, you know we’d have a hard time getting all that excited about a destination whose hotels are anything less than extraordinary. Fortunately Belize’s hoteliers, including a certain famous film director, are up to the task of creating lodgings that are worthy of their setting. And while some resorts tend to sanitize their immediate surroundings, the best hotels in Belize seek to deliver you deeper into the natural attractions and activities the country is known for. 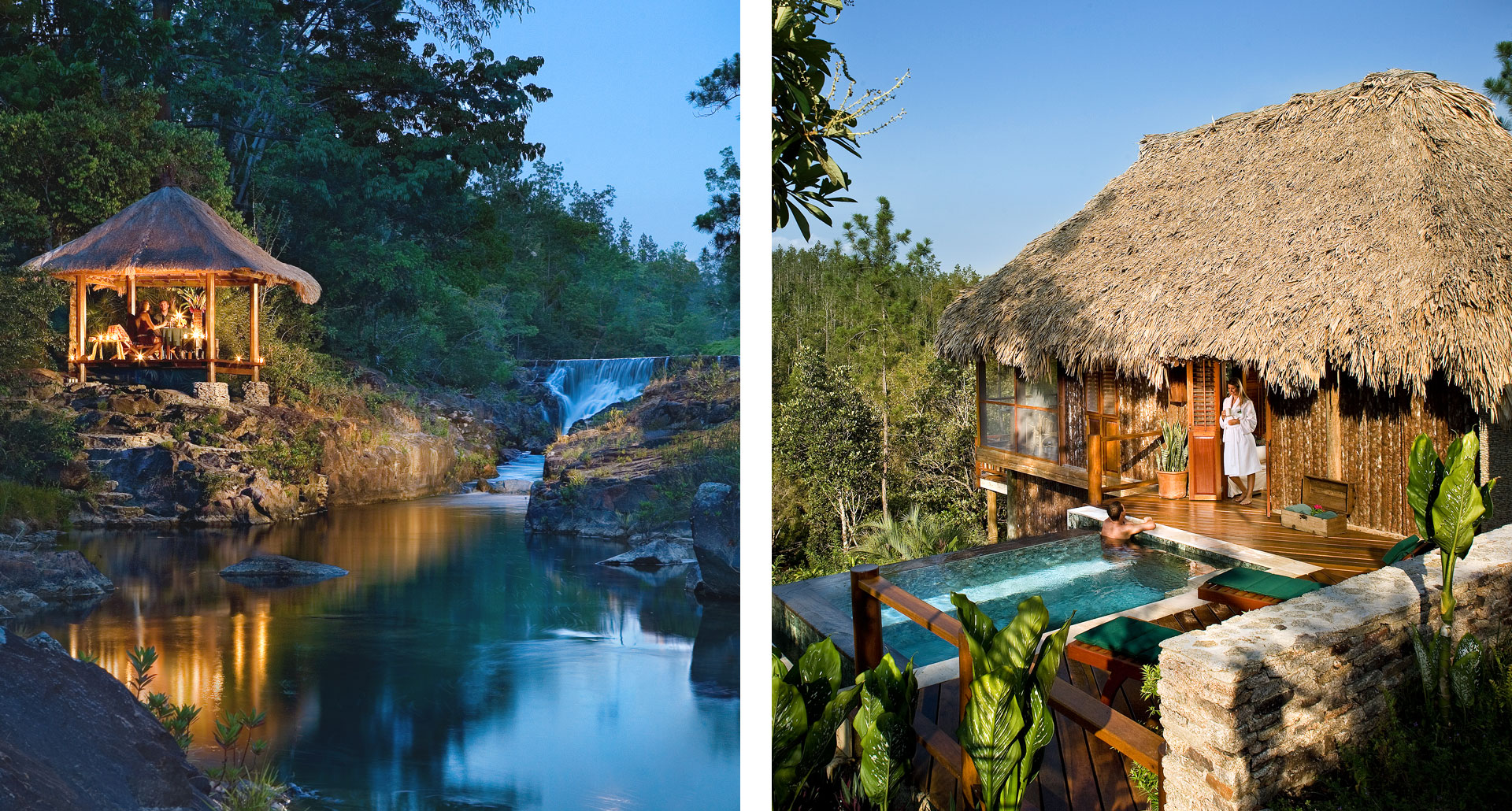 Film director Francis Ford Coppola knows a thing or two about staging an epic adventure in the jungle. Suffice it to say that things at Blancaneaux Lodge go quite a bit smoother than they did in Apocalypse Now. This is no dilettante’s experiment, but a highly accomplished, unpretentiously luxurious eco-lodge — and the wood-fired Italian cuisine and Coppola wines don’t hurt a bit. 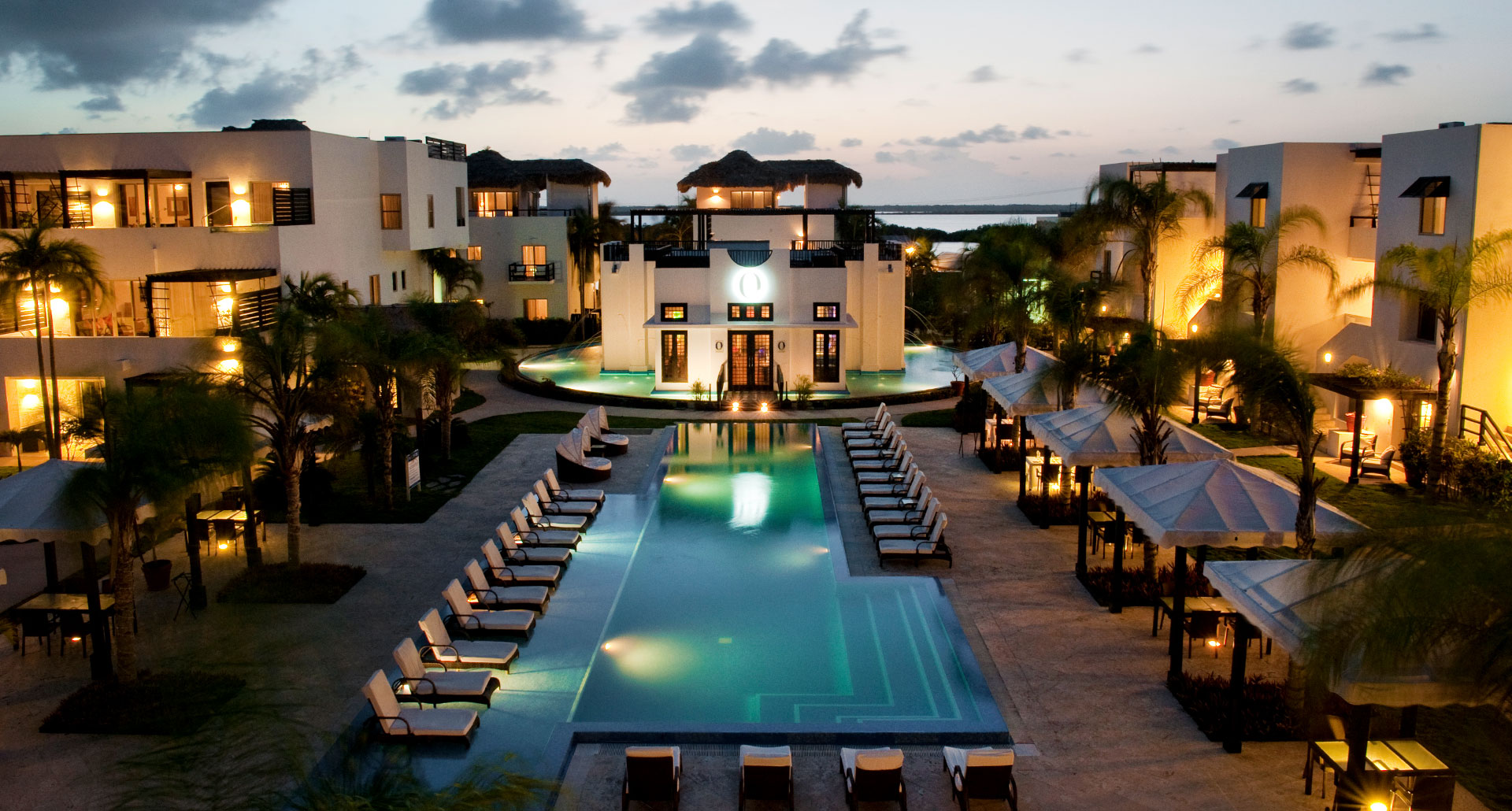 Ambergris Caye isn’t the easiest place on the planet to reach — once you get to Belize you’ve still got a commuter flight and a speedboat ride ahead of you — but it’s worth every mile. Situated right on the white sandy beach, Las Terrazas is a resort in the proper sense of the word — there’s a huge infinity pool, a fine-dining restaurant, a spa and wellness center, the works. All of this at boutique scale: just 37 rooms.

Set on a farm a 25-minute boat trip from the mainland, Thatch Caye occupies the merest speck of an island, with five overwater cabanas, four larger casitas with rooftop patios, and a single Family Villa, essentially a triple unit on stilts above the sea. What it may lack in five-star gloss it makes up for in full-immersion eco-tourism — you can’t get much closer to nature than this. 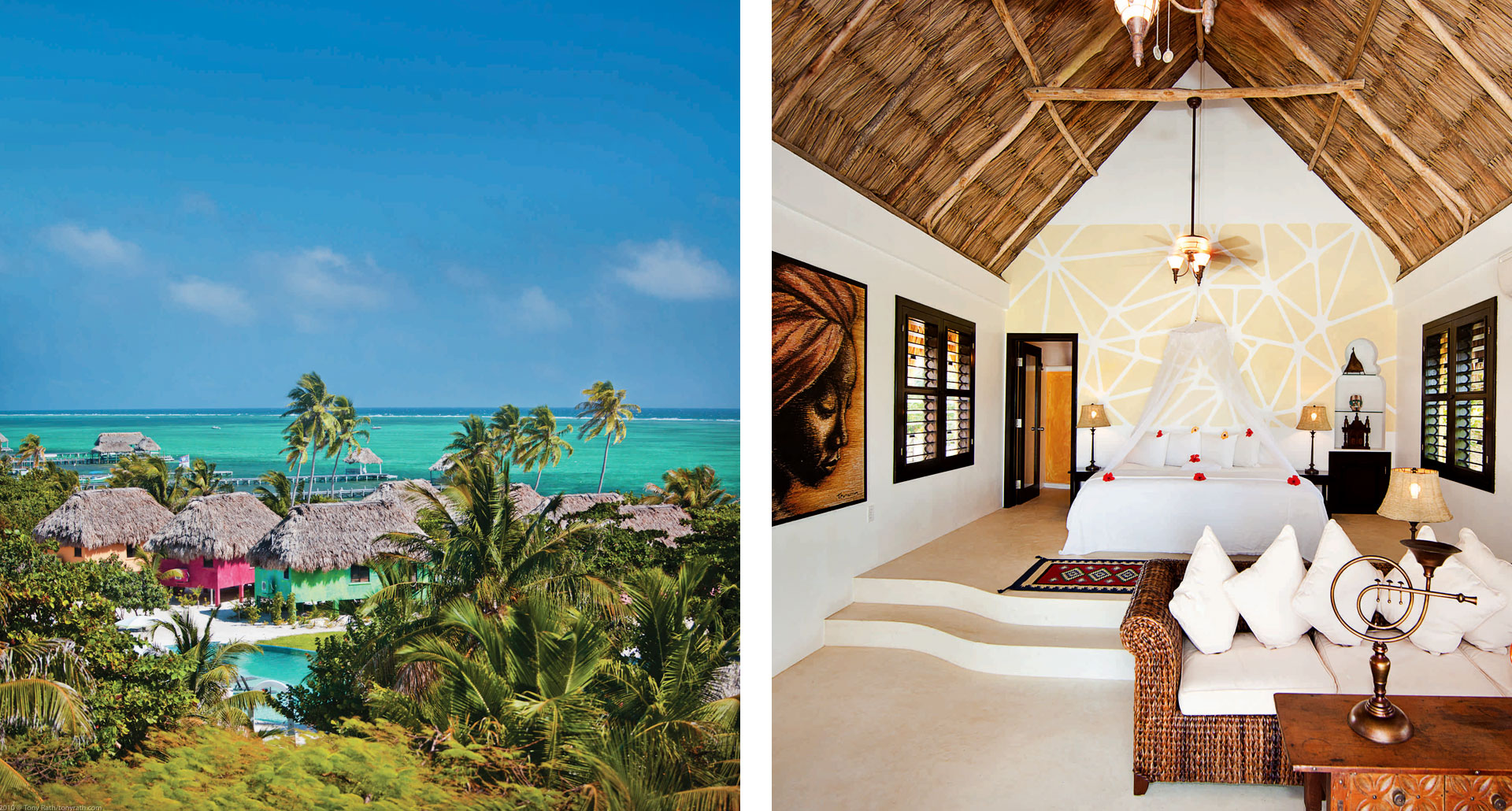 Sometimes a hotel’s address says a lot. Matachica’s, officially, is “5 Miles North of San Pedro, Ambergris Caye, Belize.” Set along a secluded white sand beach and reachable only by motorboat, the place looks more like some bohemian castaway commune than a typical resort, with its small collection of colorful thatch-roofed casitas scattered amidst the palm trees. 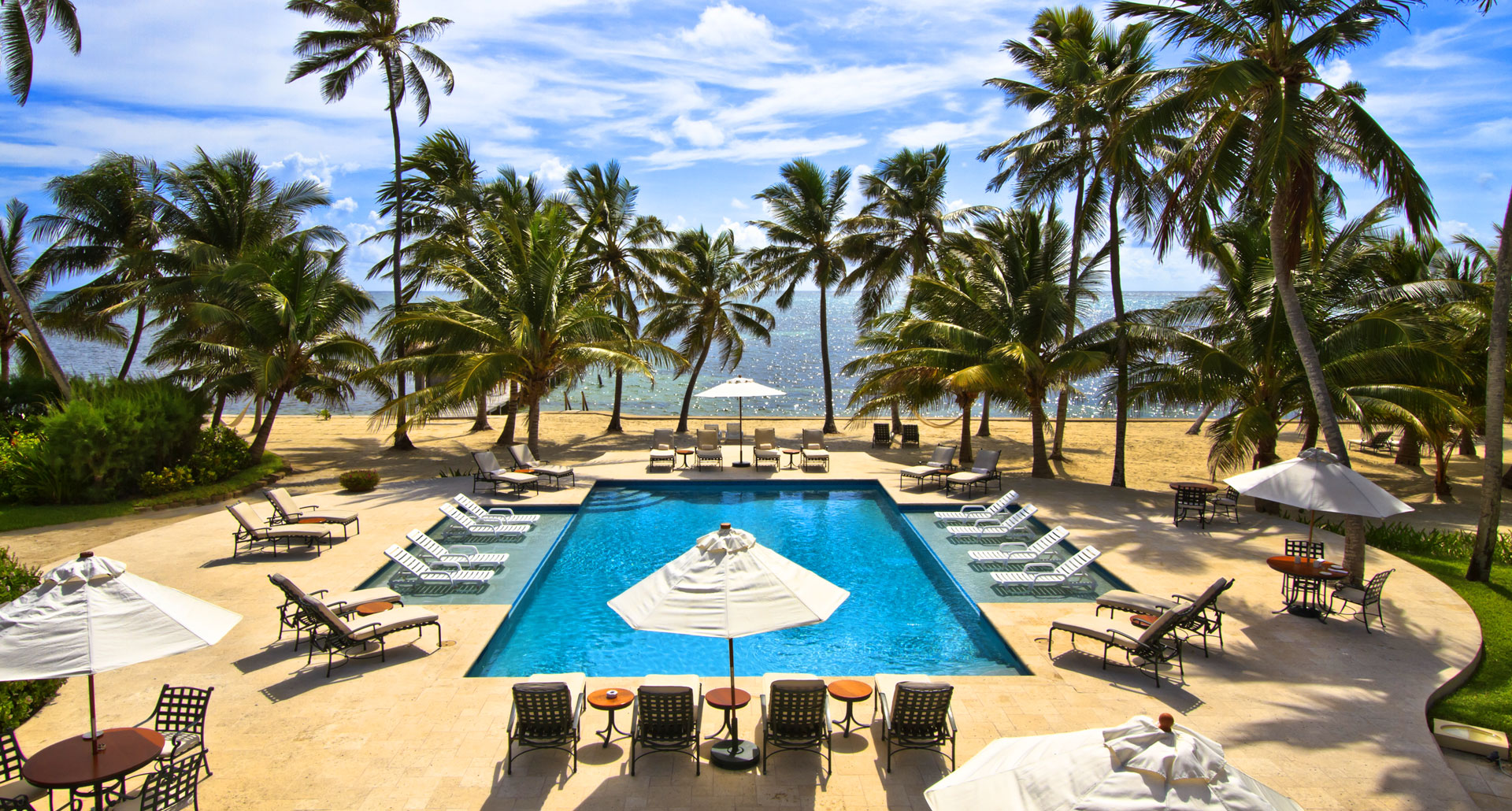 On the fringe of San Pedro, at the south end of Ambergris Caye, Victoria House’s 42 plantation-style rooms spread out over ten acres of white sand beaches and tropical gardens. From here you’ve got unparalleled access to the Belizean Barrier Reef, including such attractions as the Hol Chan Marine Reserve and the sensibly (if frighteningly) named Shark Ray Alley. 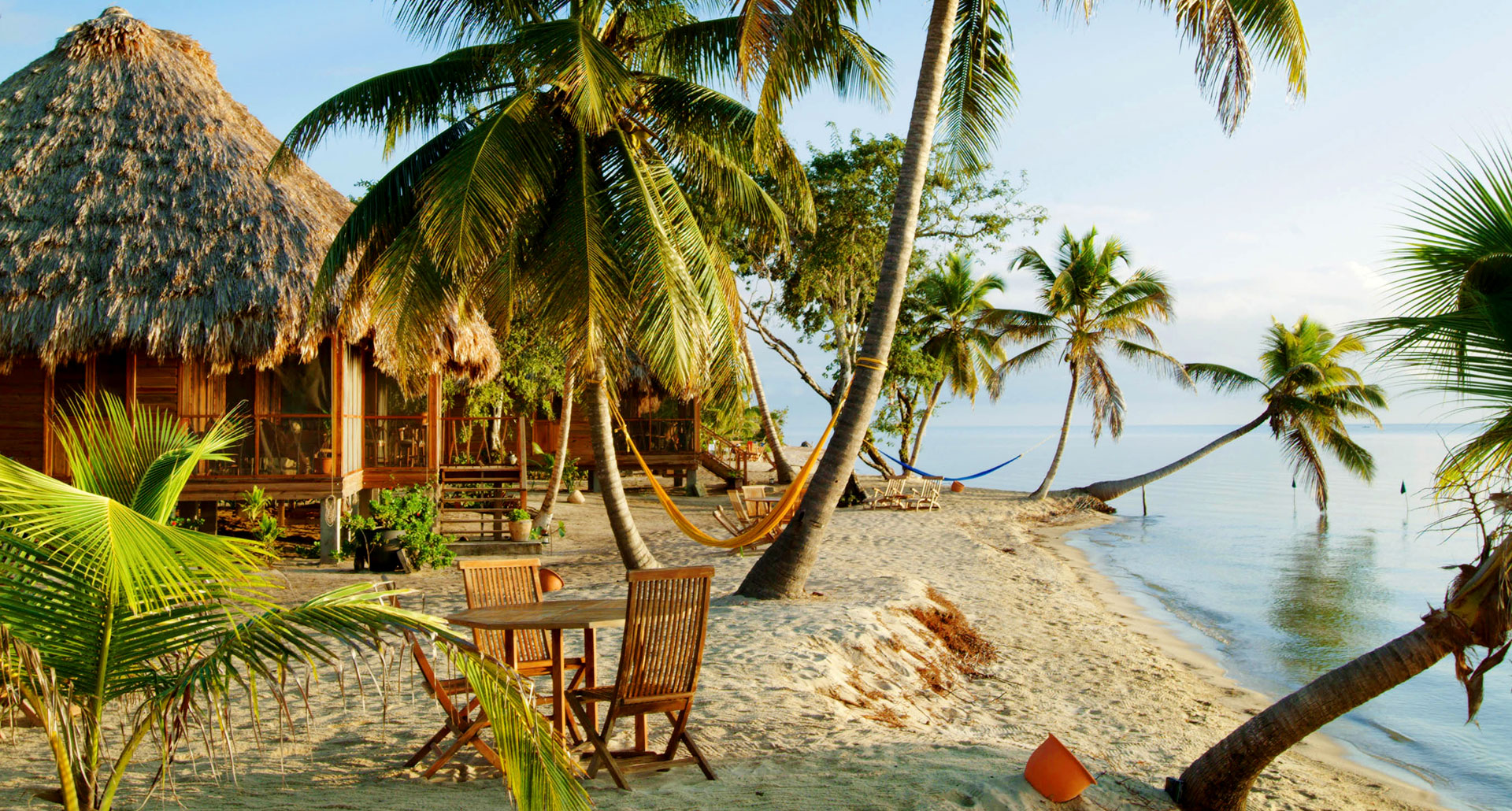 The sequel to Blancaneaux Lodge, Turtle Inn dives deeper into Coppola’s taste for Asian design, featuring Balinese-style cottages and villas and Japanese-style baths. But there’s no mistaking the setting, which is pure Belizean beachfront chill — especially if you opt for a higher level of seclusion at Coral Caye, the hotels’ own private island, home to a single isolated cottage. 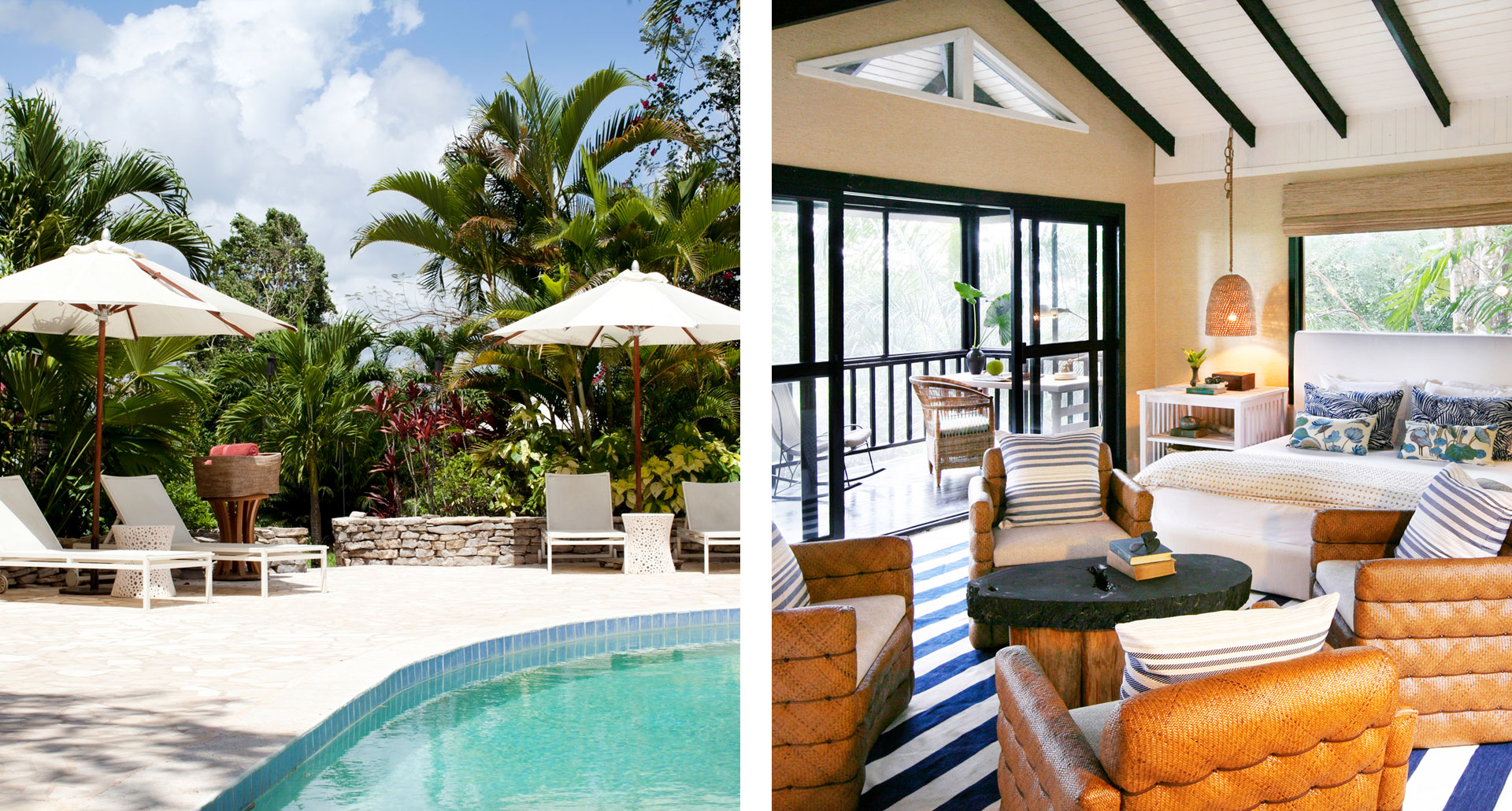 Set on a 3,000-acre sustainable farm, surrounded by a 15,000-acre rainforest preserve, and comprised of twelve privately sited, low-impact, high-pleasure suites, Belcampo Belize is, quite simply, one of the leading eco-hotels on the planet. The wildlife experiences are extraordinary, and so is the food — typically a weak link in the Caribbean, here it’s painstakingly local and expertly prepared. 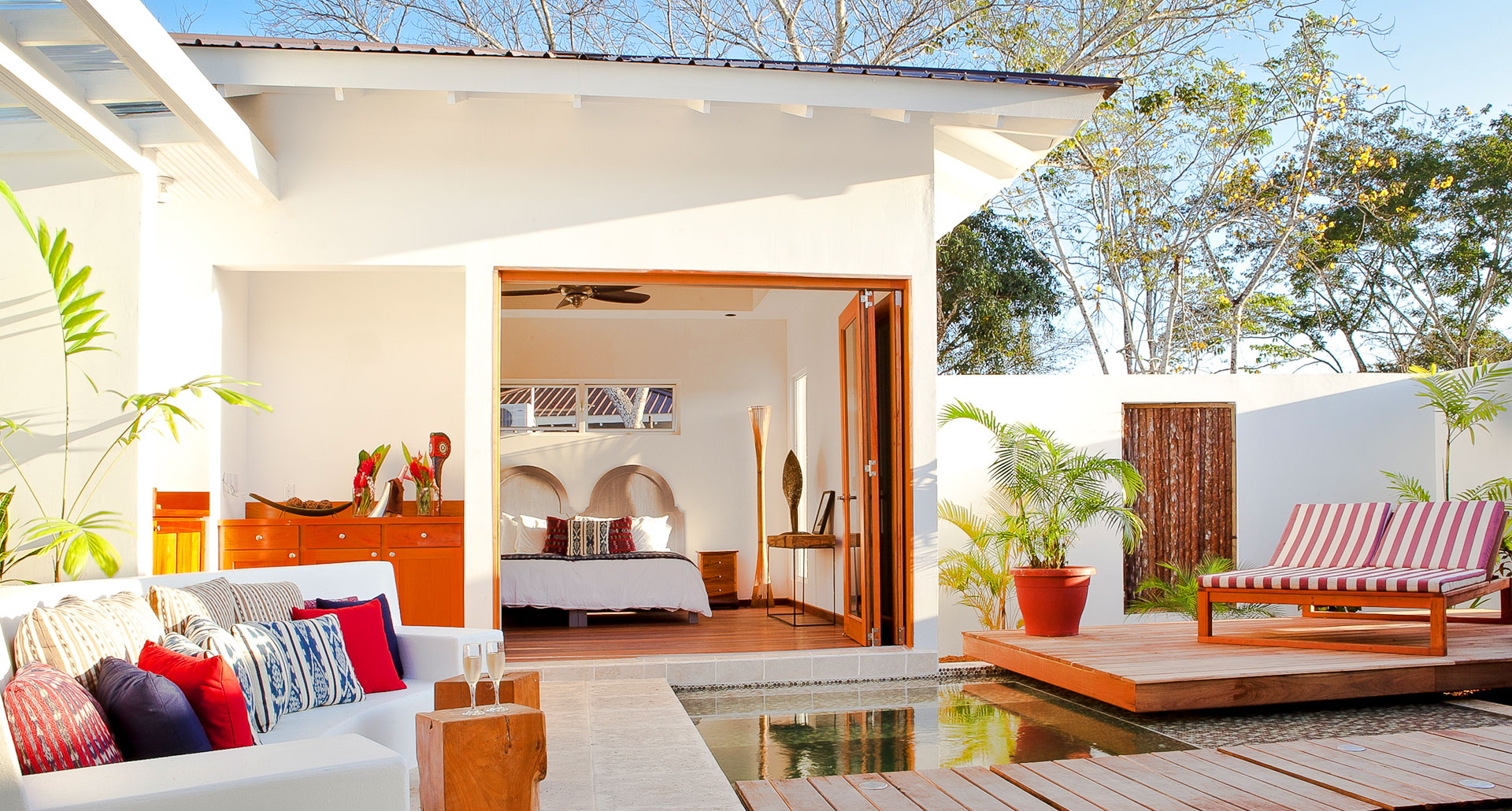 The one and only landlocked hotel on this list, San Ignacio makes its home in the Mayan country of western Belize, near the Guatemalan border. You’ll trade surf and sand for archaeological expeditions and rainforest canopy tours — and at the end of the day you’ll have a small-scale, environmentally friendly luxury hotel experience awaiting your return. 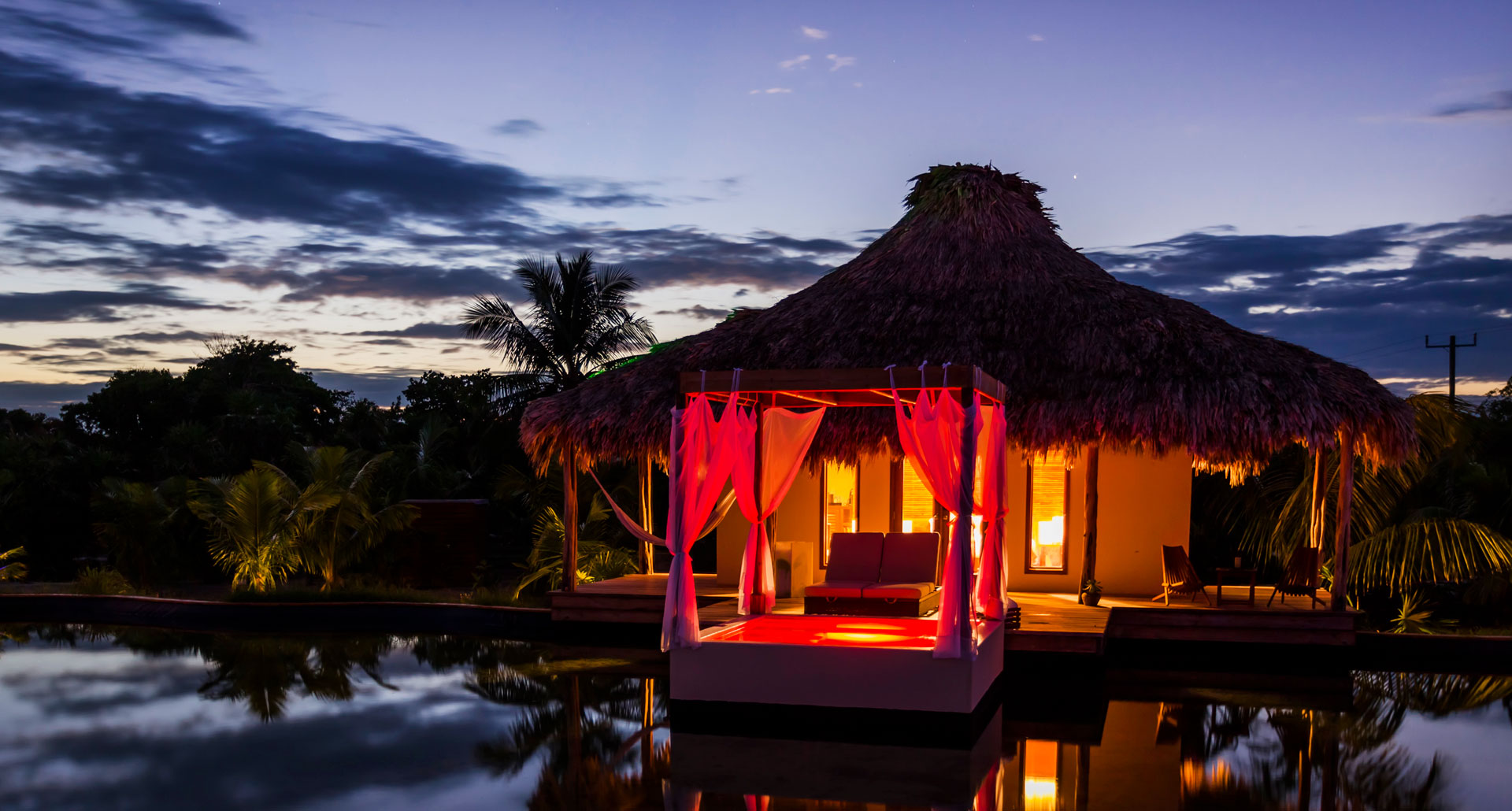 El Secreto’s secret recipe? Thirteen luxe thatch-roofed villas, a hidden Caribbean cove, and plenty of activities for those unsatisfied with lying in some warm white sand under the shade of a swaying palm tree. And as you’d guess, it’s all rather secluded. There’s no road in, just a speedboat that takes you eleven miles up the coast from the more crowded beaches of San Pedro.

See all of our boutique hotels in Belize.