Enjoy our Top Ten Tablet Plus hotels for the week of March 30. 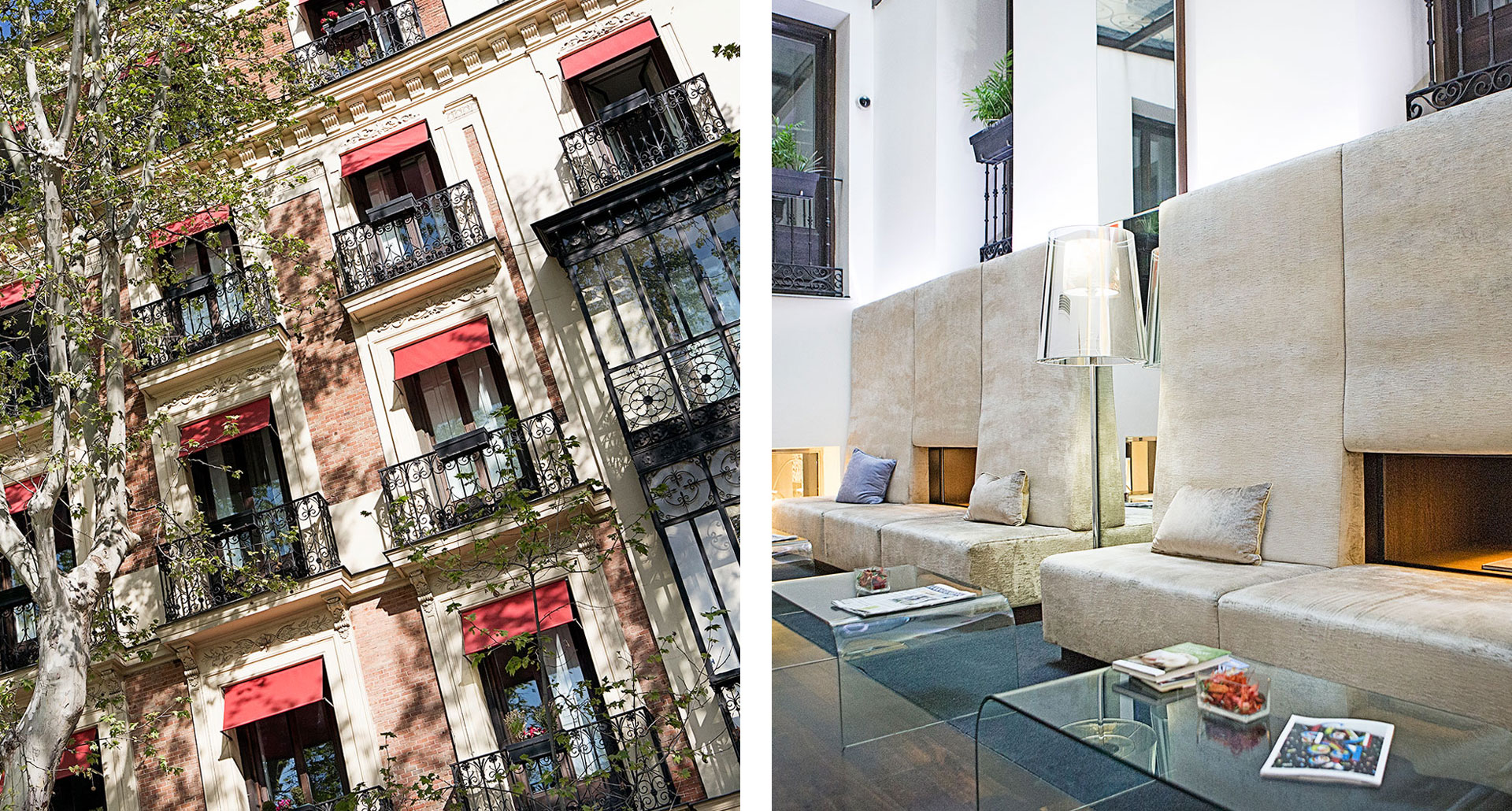 It took a while, but the Hospes group has moved into the capital. The patented Hospes formula (classic building, modern-luxe interiors, signature spa and restaurant) is on display in this classic 19th-century building just off the Plaza de la Indepencia, deep in the heart of Madrid. 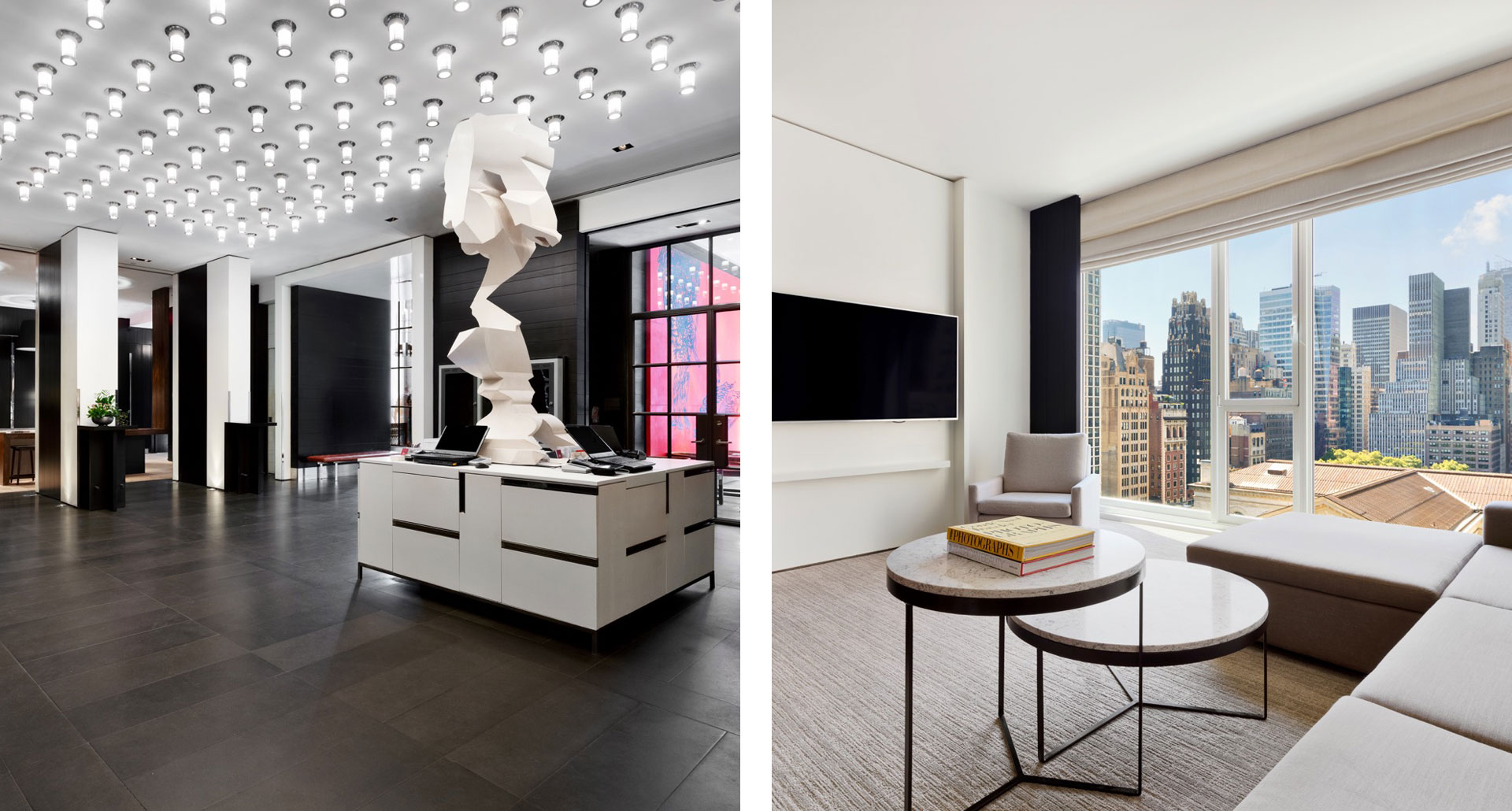 At the risk of massively understating the case, we’ll start by saying that some of the big chains are really getting the hang of this whole boutique-hotel thing. The Andaz concept was probably focus-grouped and market-tested for years by the design wonks in the Hyatt black-ops program, but when they finally started opening — whether in London, or Hollywood, or Wall Street, or here, the Andaz 5th Avenue — they felt as fresh as any independent boutique. 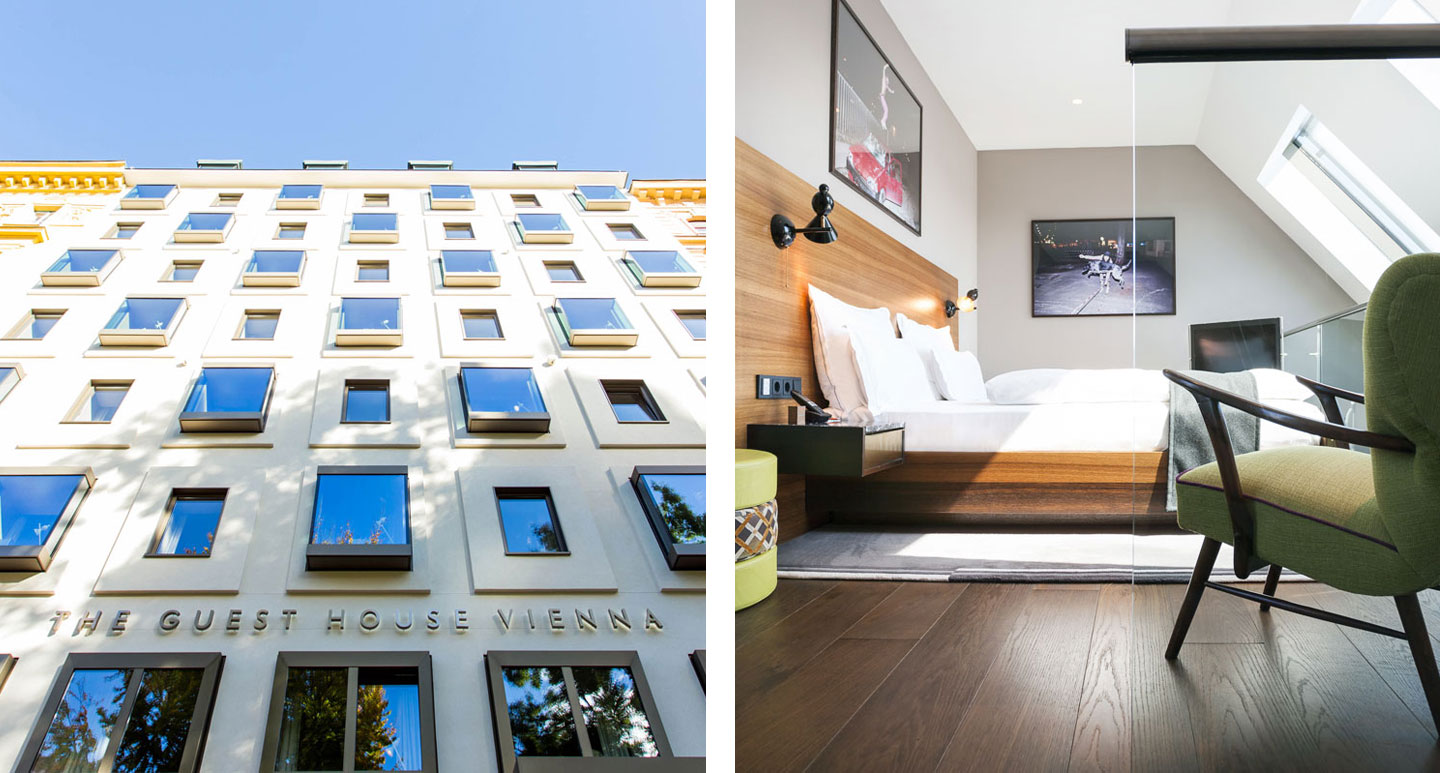 Glittering palaces, opulent opera houses, spotless glass cases displaying the Austrian Crown Jewels — walking around Vienna, it feels like the whole city is gilded with delicate gold leaf. It’s a formal aesthetic that carries over to the city’s grand hotels, and a standard that makes The Guesthouse, a cool, pared-down hotel with 39 contemporary rooms and suites, stand out in contrast. As the name implies, the Guesthouse isn’t a traditional hotel: staying here is more like having the keys to a spacious designer apartment with a few extra services. There’s no swimming pool, in other words, but guest rooms feature separate living and sleeping areas, espresso machines, and complimentary bottles of wine — that’s bottles, plural. 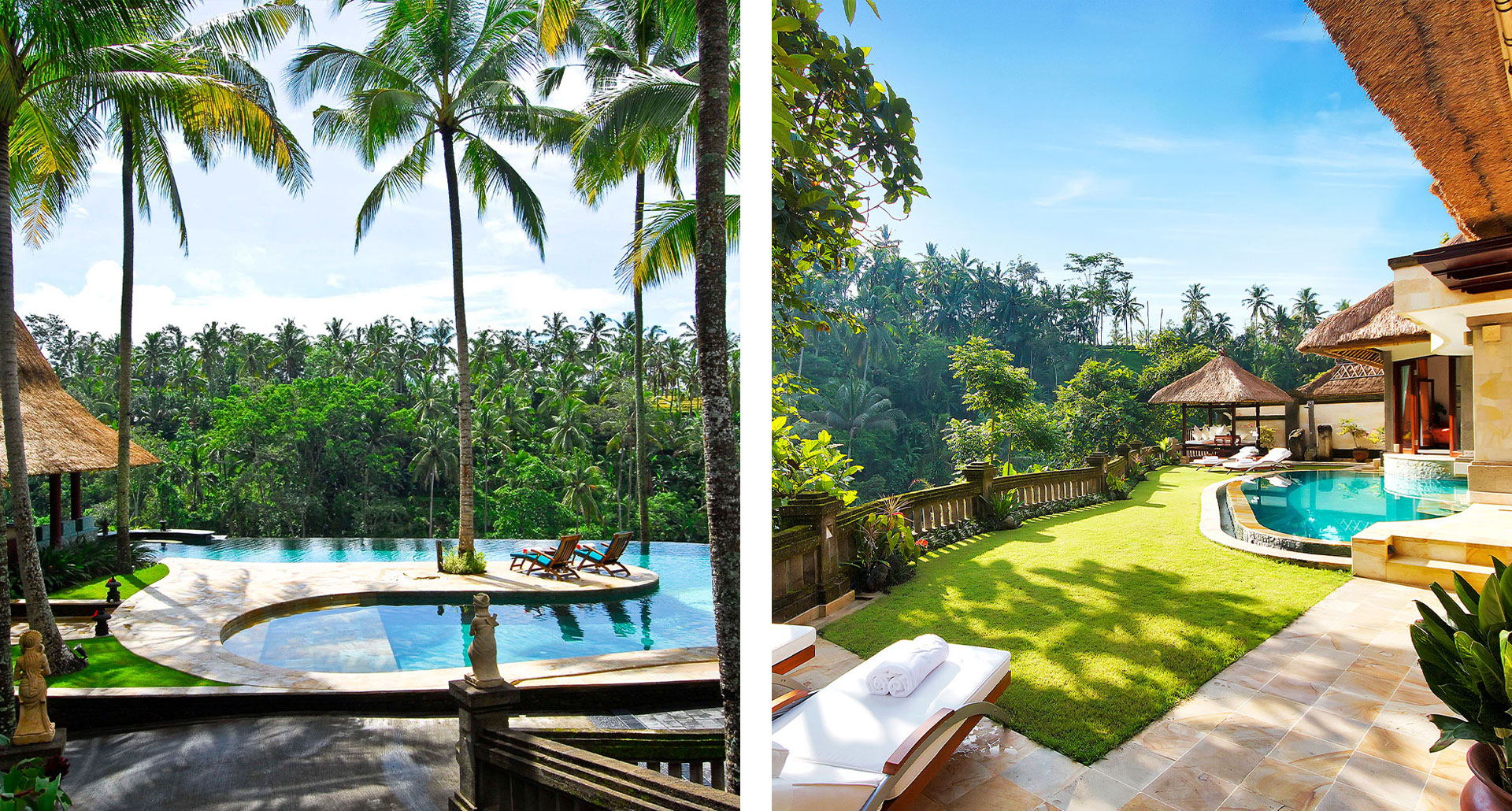 No relation, apparently, to any other Viceroy, in Los Angeles or anywhere else — the Viceroy Bali is a one-off, a family-owned hotel, a rarity at the high end of the resort market. The location is increasingly familiar, as more travelers discover the charms of inland Bali — the Viceroy is minutes from Ubud, high on a hillside overlooking the lush (and steep) Lembah Valley. 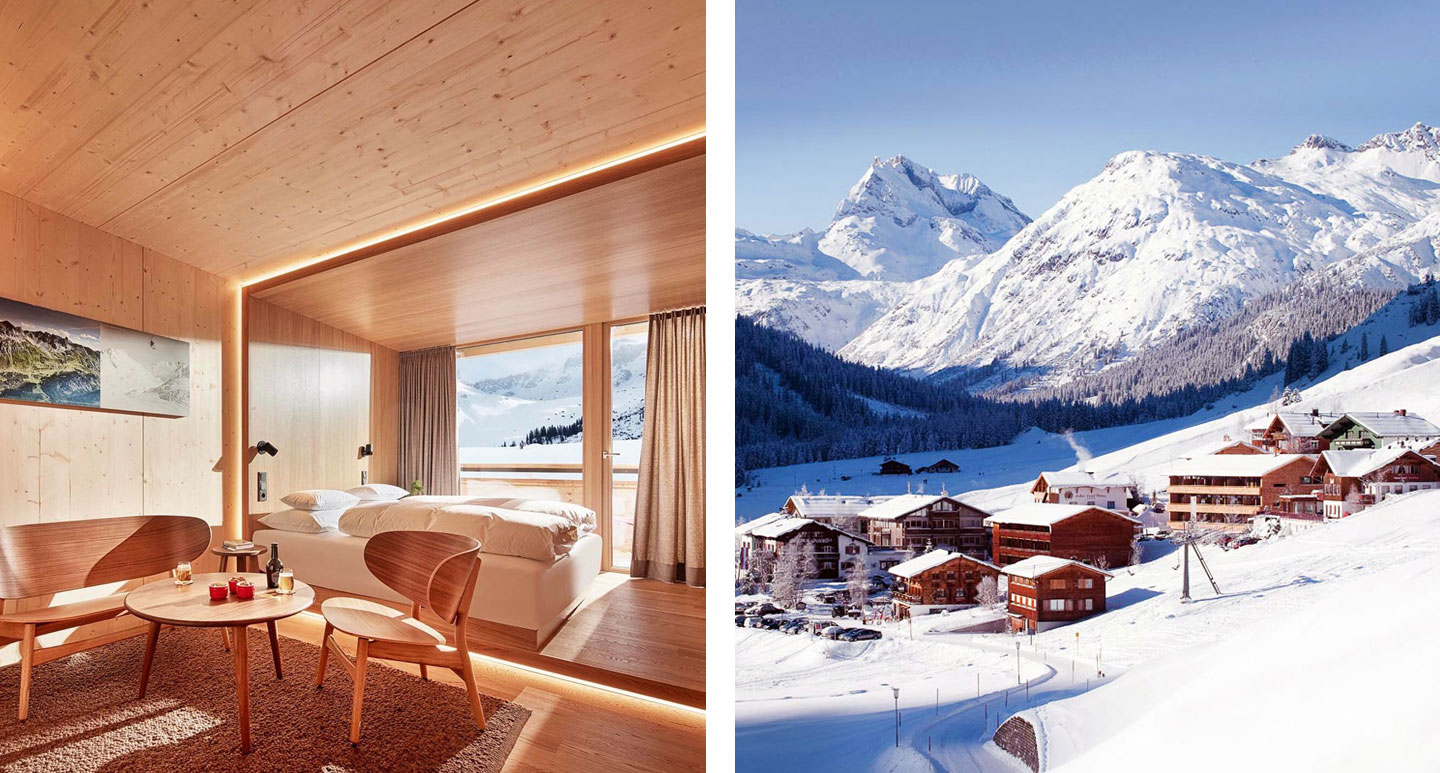 Tucked away high in the mountain state of Vorarlberg, Austria’s westernmost state, is the resort village of Lech am Arlberg, which is that most unusual variety of ski town: it’s actually a proper town, founded not during the 20th-century ski boom but by Swiss migrants during the 14th century. And here you’ll find a most unusual resort inn, the Walch’s Rote Wand — a classic centuries-old Alpine inn, which beneath its absolutely traditional surface has been cleverly modernized, renovated in a light, contemporary style. 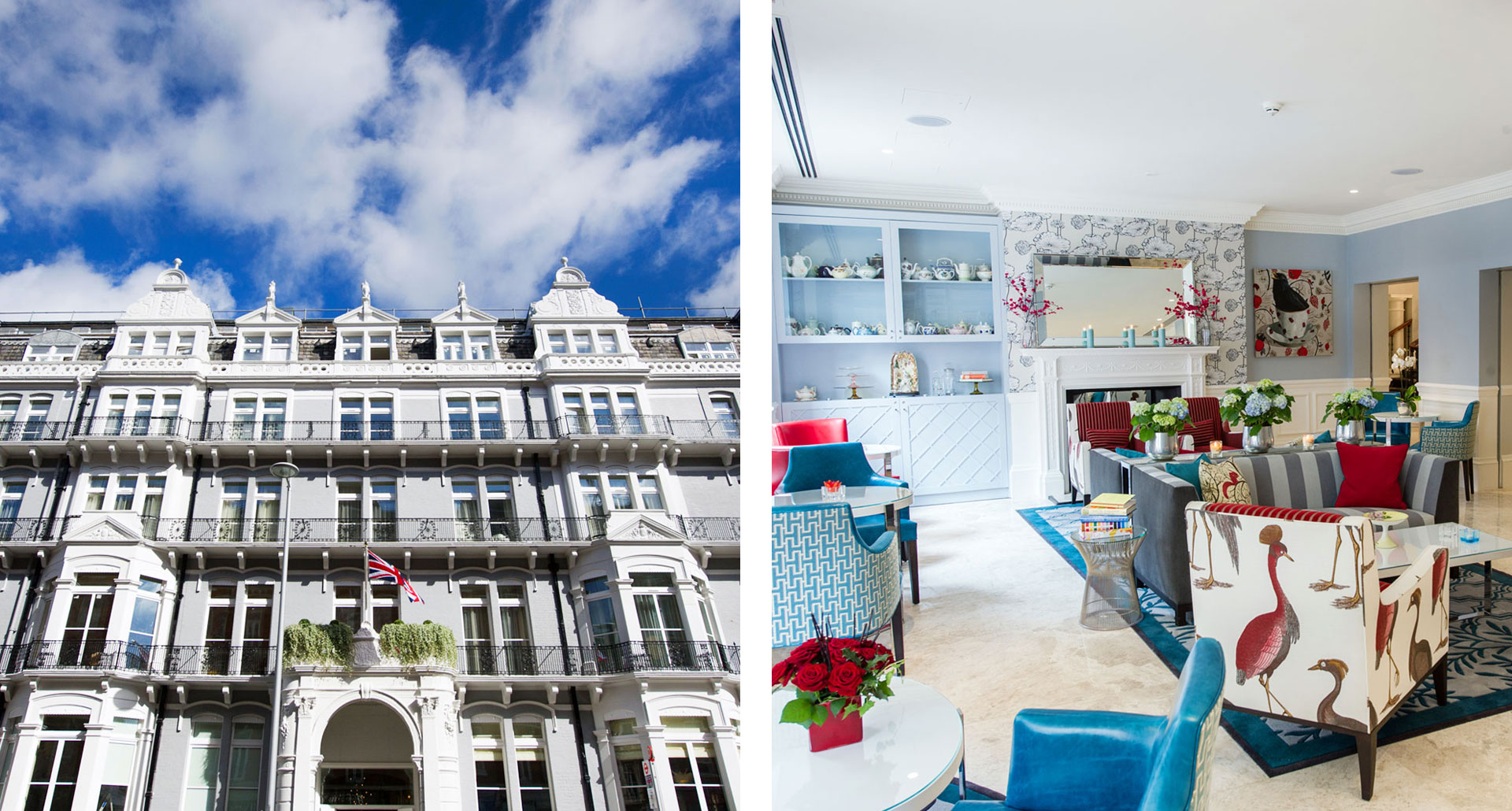 The Ampersand, a whimsical South Kensington hotel with a name to match, is so unabashedly, eccentrically British that it would risk self-parody if it weren’t so dashingly pulled together. Housed in an 1888 townhouse, the hotel takes the Victorian taste for eclecticism — curiosities and objets d’art abound — and gives it a thoroughly modern look. It’s a fitting style for a neighborhood whose shops run from indie boutiques to Stella McCartney to Harrods, and whose cultural institutions contain everything from the classic collections of the Victoria & Albert Museum to the irreverent pop-culture photography of the Proud Gallery. 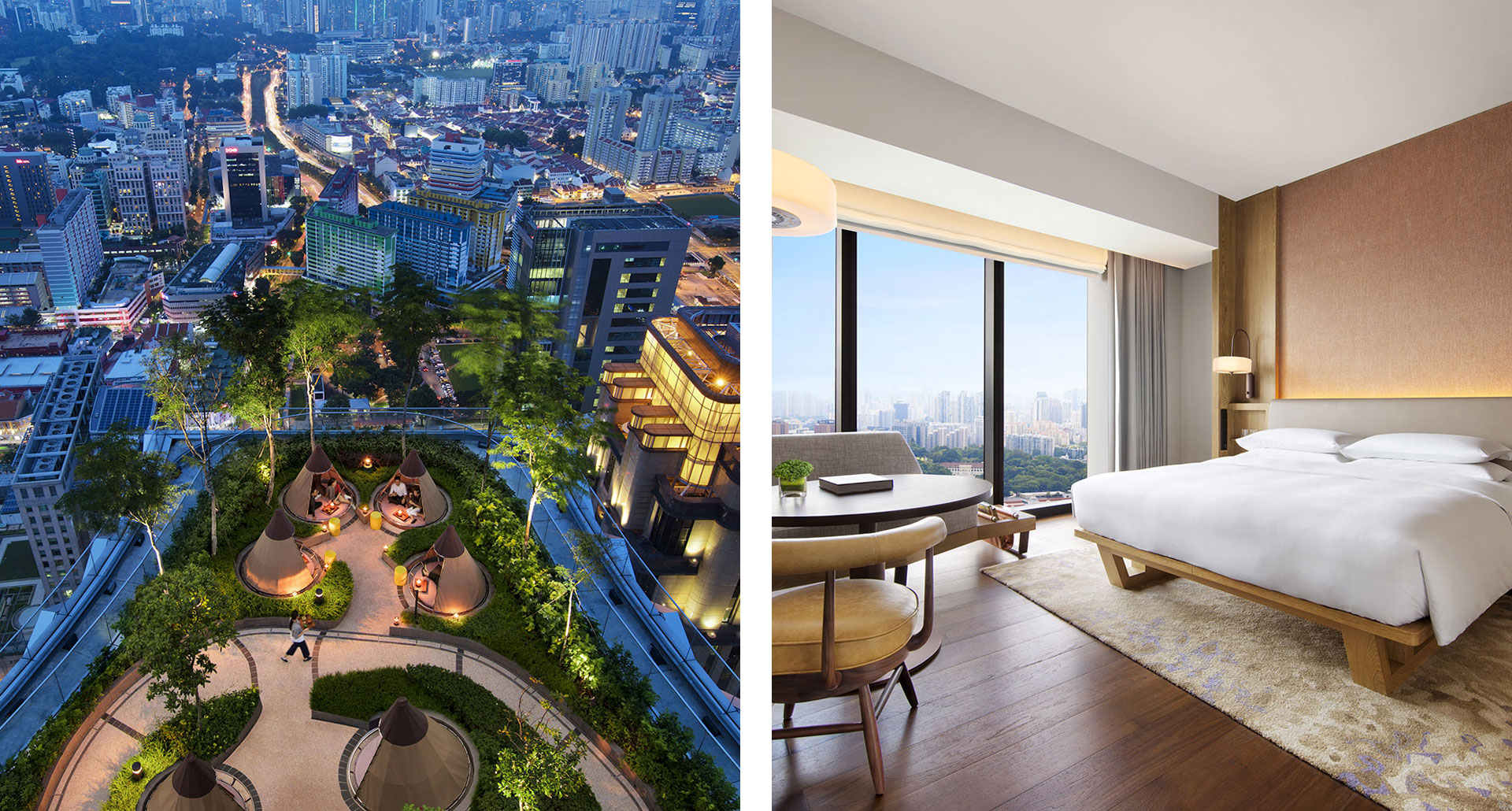 When Hyatt first announced their Andaz sub-brand, there was a bit of skepticism about whether a corporate behemoth could really just decide overnight to join the design-hotel avant-garde. A decade or so on, they’ve put most people’s doubts to rest, but even so, Andaz Singapore still feels like a surprise. The German architect Ole Scheeren’s DUO towers are a dramatic statement indeed — but the hotel within, the first Andaz in Southeast Asia, turns out to be more than equal to the task. 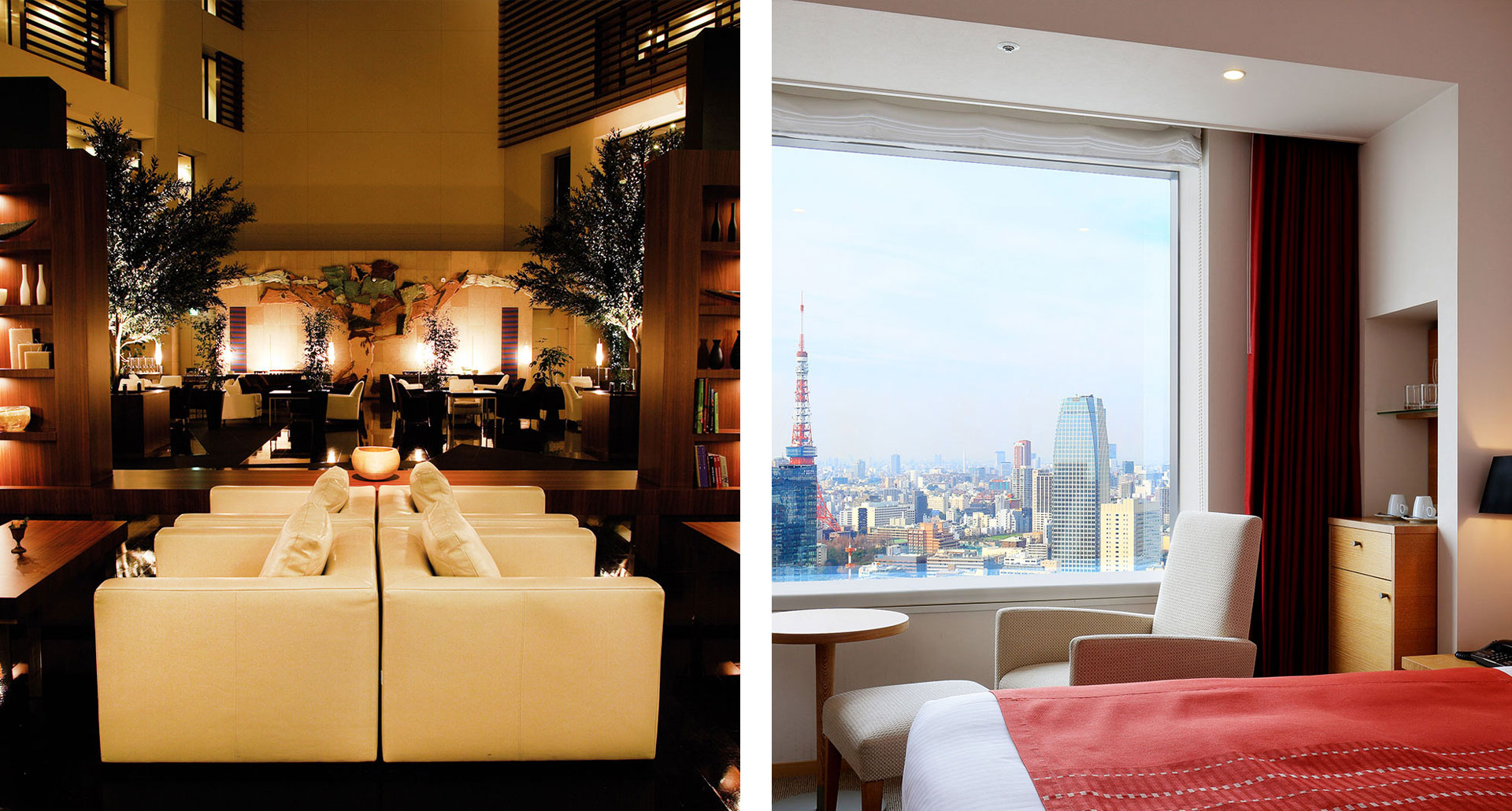 Like many Tokyo hotels, the Park Hotel occupies part of a mixed-use skyscraper; in this case, ten uppermost floors of the Shiodome Media Tower, right in the heart of downtown. Architecturally, the Park Hotel is rather unique — the core of the building has been hollowed out, so that its 273 rooms all face outward. The result is a sun-drenched ten-story atrium, extending 120 feet straight up to the skyscraper’s glass ceiling — far more refreshing than the enclosed lobby floor of some Tokyo tower hotels. 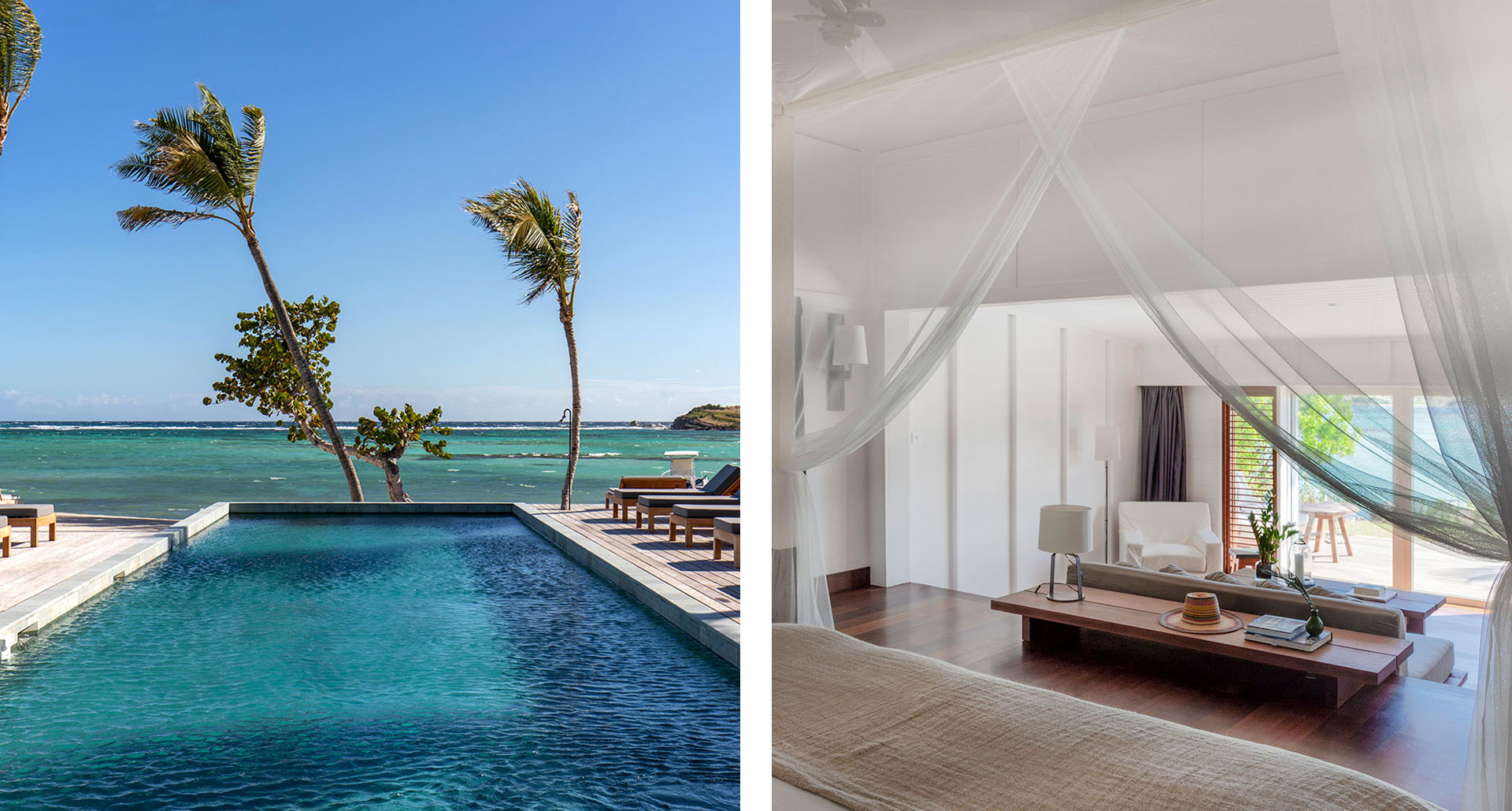 When it comes to a modern, living connection to Europe, there’s nothing quite like Saint-Barthélémy — it feels uncannily like a tropical island version of present-day France, like a little bit of 21st-century Paris on the beach. This urbane charm is Le Sereno’s bread and butter. Where most tropical island hotels can’t help but indulge in just a little pastel kitsch, this one stays fashionably composed through and through. The designer, Christian Liaigre, is perhaps best known for hotels like the Mercer in New York, and for his upscale retail and residential work, but Le Sereno is proof that his pared-down aesthetic travels well. 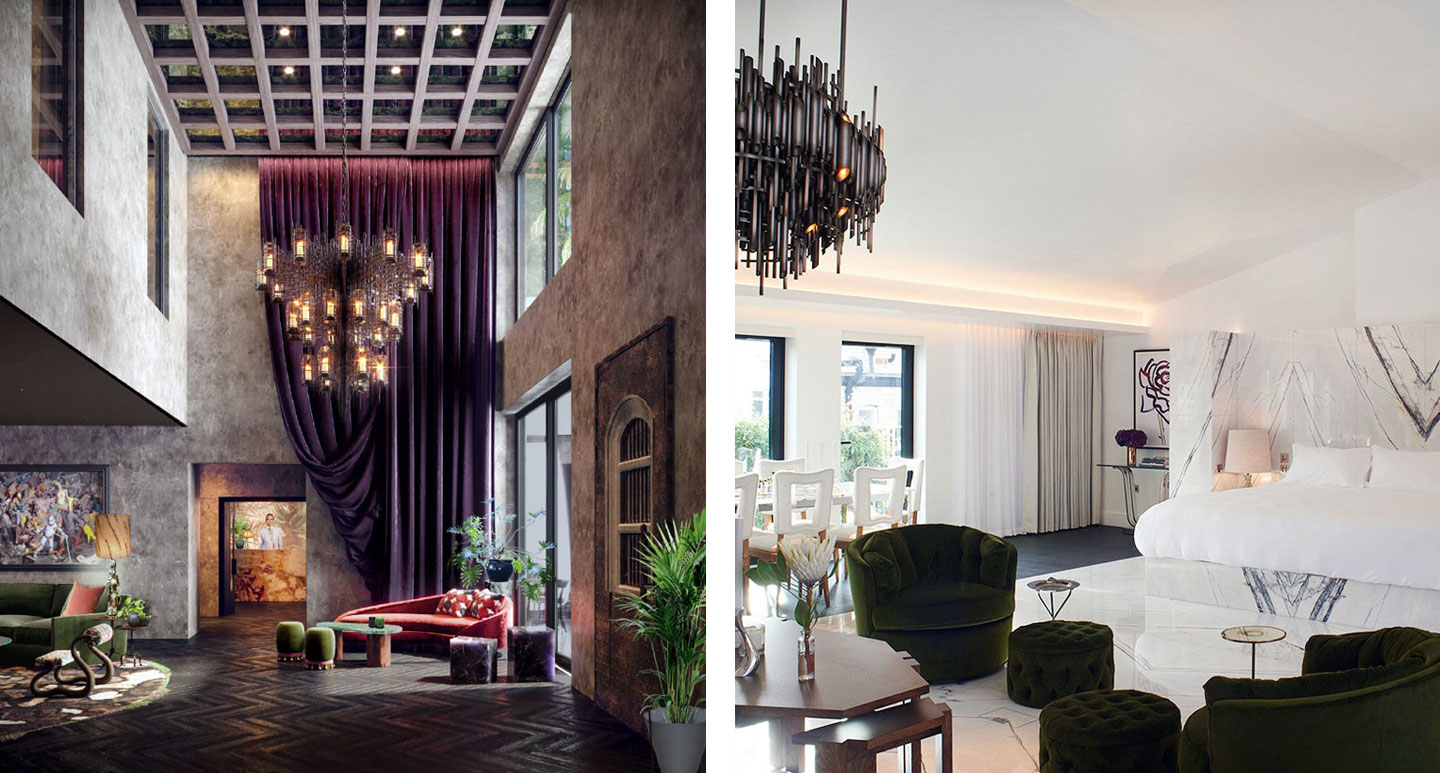 Some of London’s luxury boutique hotels are so tasteful they’re almost invisible, catering to guests who want a blank canvas on which to project their own personalities. And then there’s the Mandrake. Set in a relatively sleepy section of Fitzrovia, it’s nevertheless nothing short of a fantasy world, a moody, atmospheric 34-room boutique hotel surrounding a central courtyard full of hanging jasmine and passionflower.