They seemed like a novelty in the nineties, but restored motels have gone from kitsch to cutting-edge, and play a key role in the future of hospitality.

Near the end of the last century, a trend began of transforming forgotten old motor lodges into well-run, hip little hotels. At first it was a bit surprising, if not pleasantly shocking, to see the rebirth of these run-down structures happening alongside the high-design, big-city glamour of the boutique hotel boom. But on reflection, it makes perfect sense. Sleek and slick isn’t for everyone, and it can be even less appropriate when you’re traveling out on the road.

Now, more than twenty years on, the concept has blossomed beyond an occasional curiosity. North America has been blessed with dozens of wonderfully restored motels, and they’re not just for lovers of kitsch. With environmental sensitivity more important than ever, repurposing a roadside inn is a great way to reuse existing materials — especially when they come pre-loaded with a clearly defined visual character. Their low-slung roofs, outside-facing doors, and pull-up parking spots are iconic, and in an age where authenticity trumps excess, little reimagining is required to bring them back to relevance in the current century.

Below, we’ve collected some of our favorite newly refurbished motels — evidence that the craze is showing no signs of slowing and that the road to a sustainable future might go through a discarded past. 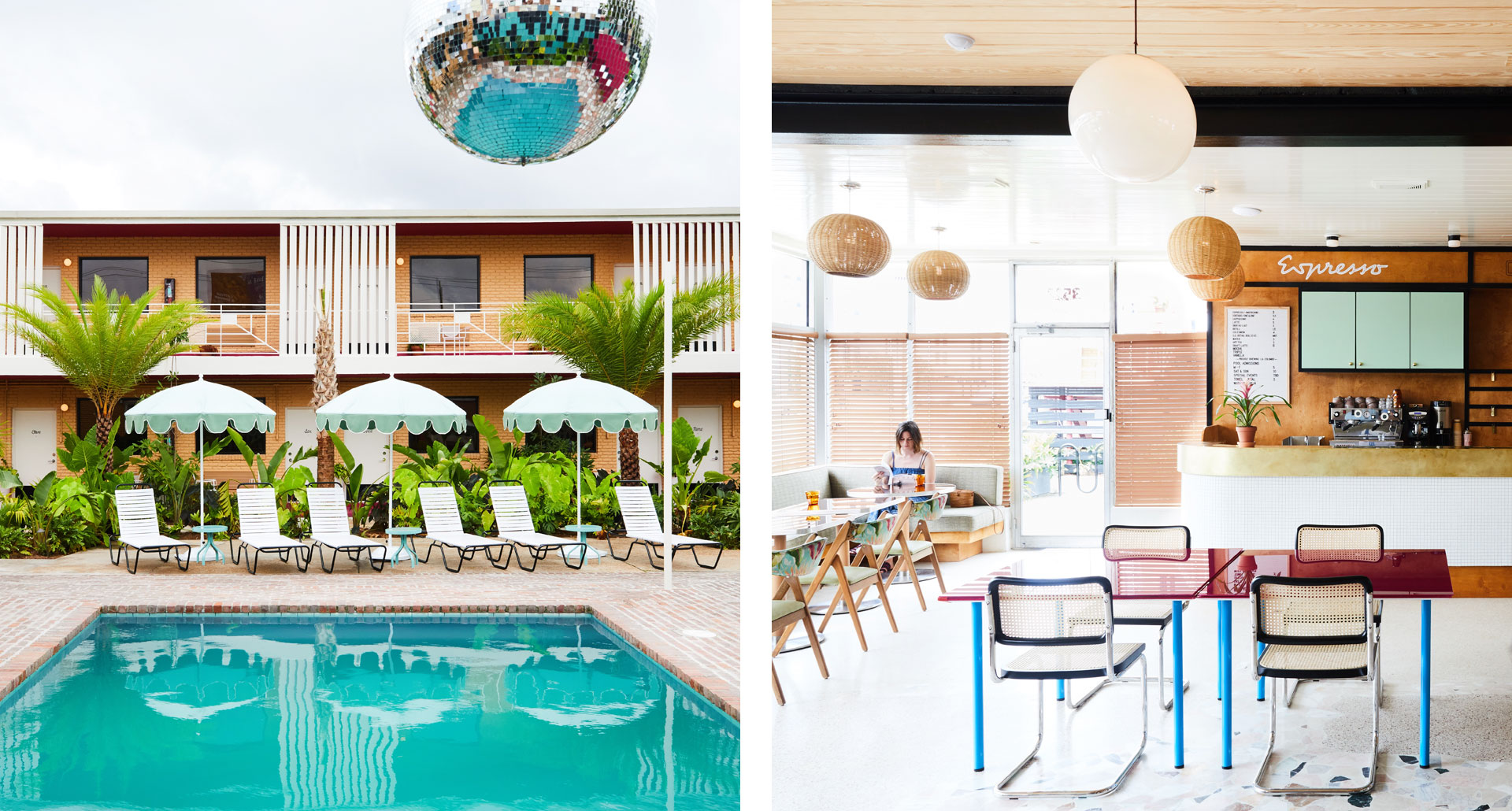 There’s nothing wrong with those classic New Orleans houses with their second-floor galleries, but there’s life beyond the French Quarter, and the Drifter is like nothing else you’ve seen in this town. With its rotating selection of food trucks, its well-chosen craft beers, its third-wave coffee, and its charmingly hedonistic courtyard pool, it’s tailor-made for young travelers with more taste than money. 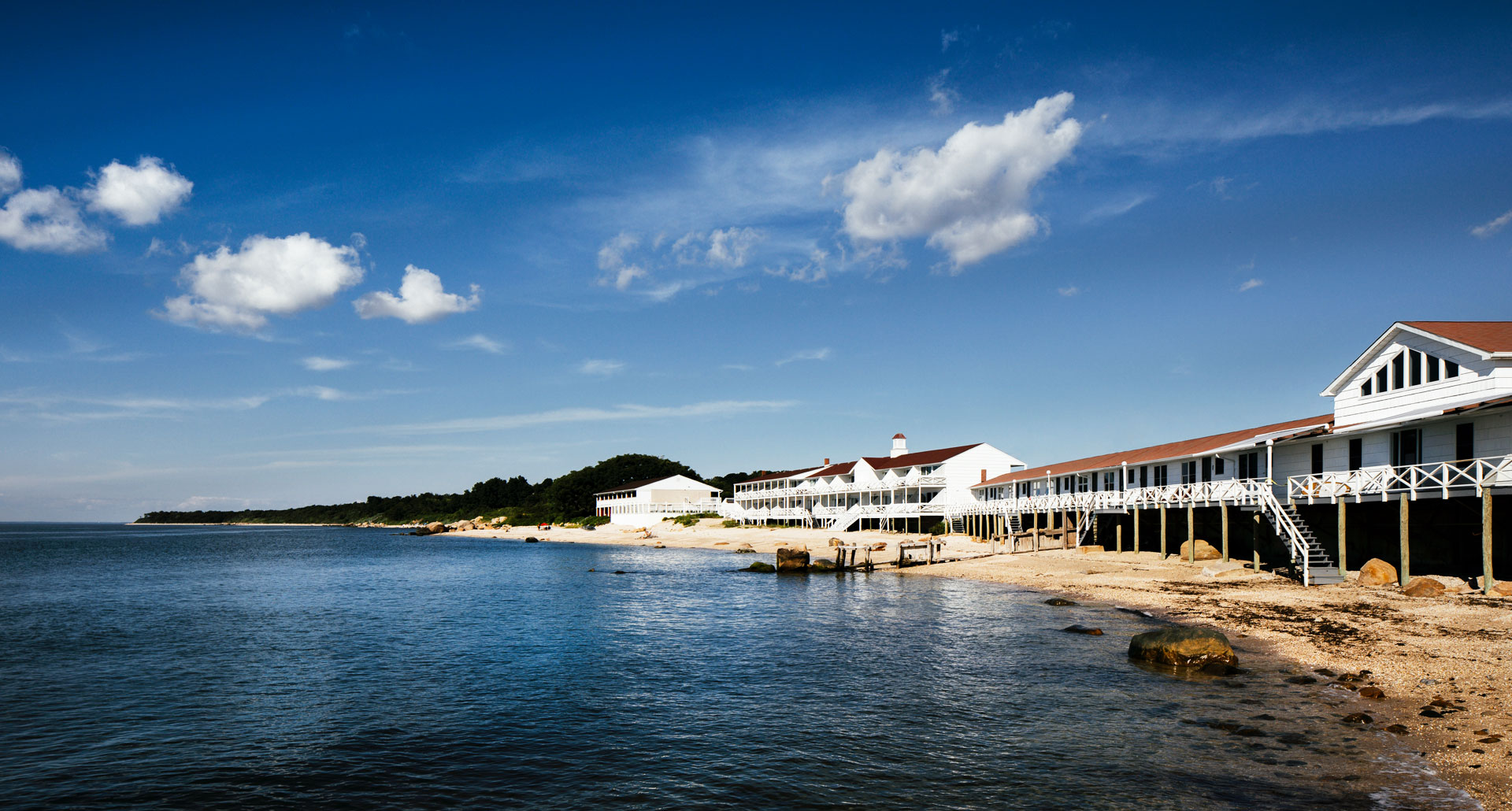 The North Fork is the less traveled side of eastern Long Island, and it’s here that you’ll find Sound View Greenport, a Fifties motel that’s been restored, rehabilitated, and given the boutique-hotel treatment by Studio Tack, a Brooklyn-based design firm. The inspiration for the style in this case was New England’s homegrown modernist heritage, which lends Sound View’s visual identity an extra measure of authenticity. 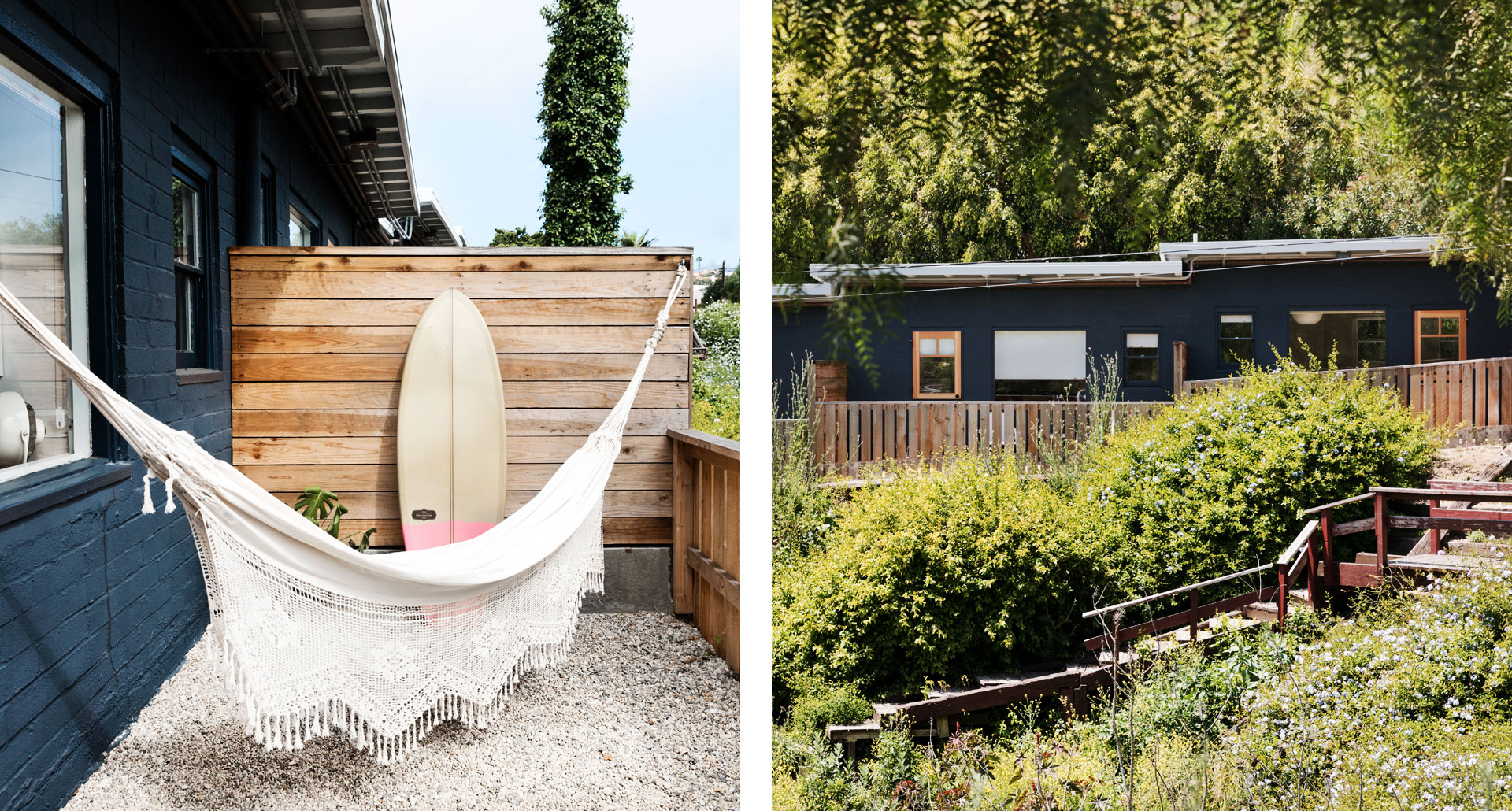 The Malibu Riviera, once host to the likes of James Dean and Marilyn Monroe, was first established in 1947, though the sheen wore off as the decades passed. After a thorough re-imagining at the hands of the L.A. design firm Folklor, it’s found new life, and it’s not hard to imagine the present-day equivalents of Dean and Monroe — if indeed they exist — checking in at the Native Hotel for a few nights away from the bright lights of Hollywood. 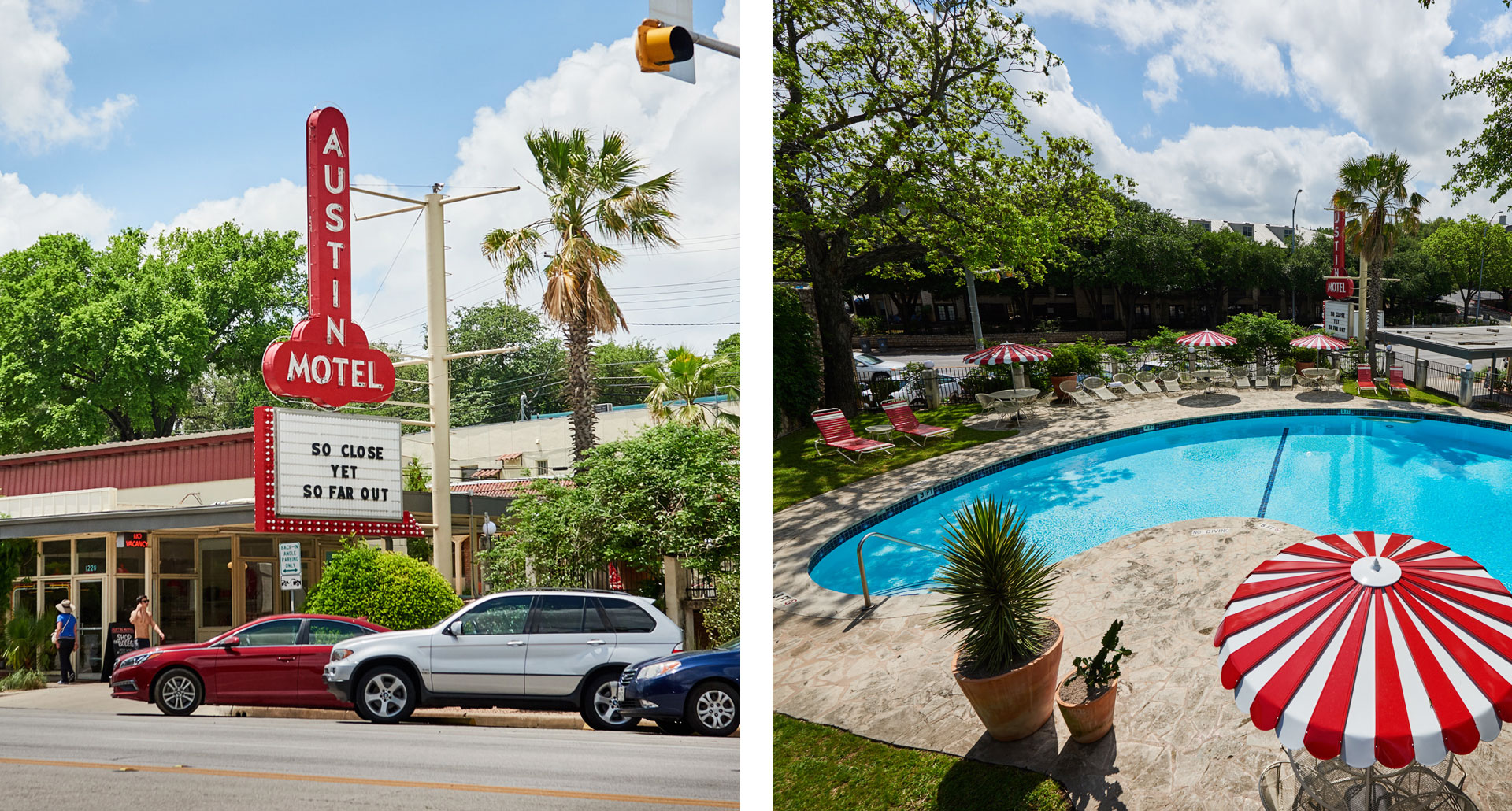 A recent addition to Liz Lambert’s Austin collection is a classic American motel conversion. The distinctive Austin Motel sign, which has been drawing double-takes along South Congress since 1938, is now backed up by some equally distinctive retro-themed interiors, and it’s all set to join the Saint Cecilia and the Hotel San José as part of South Austin’s trifecta of exceptional lodgings. The parking lot, once the indispensable centerpiece of a roadside motel, has been replaced by an open-air lounge space, and the old pool is as charming as ever, joined by a brand-new poolside bar. 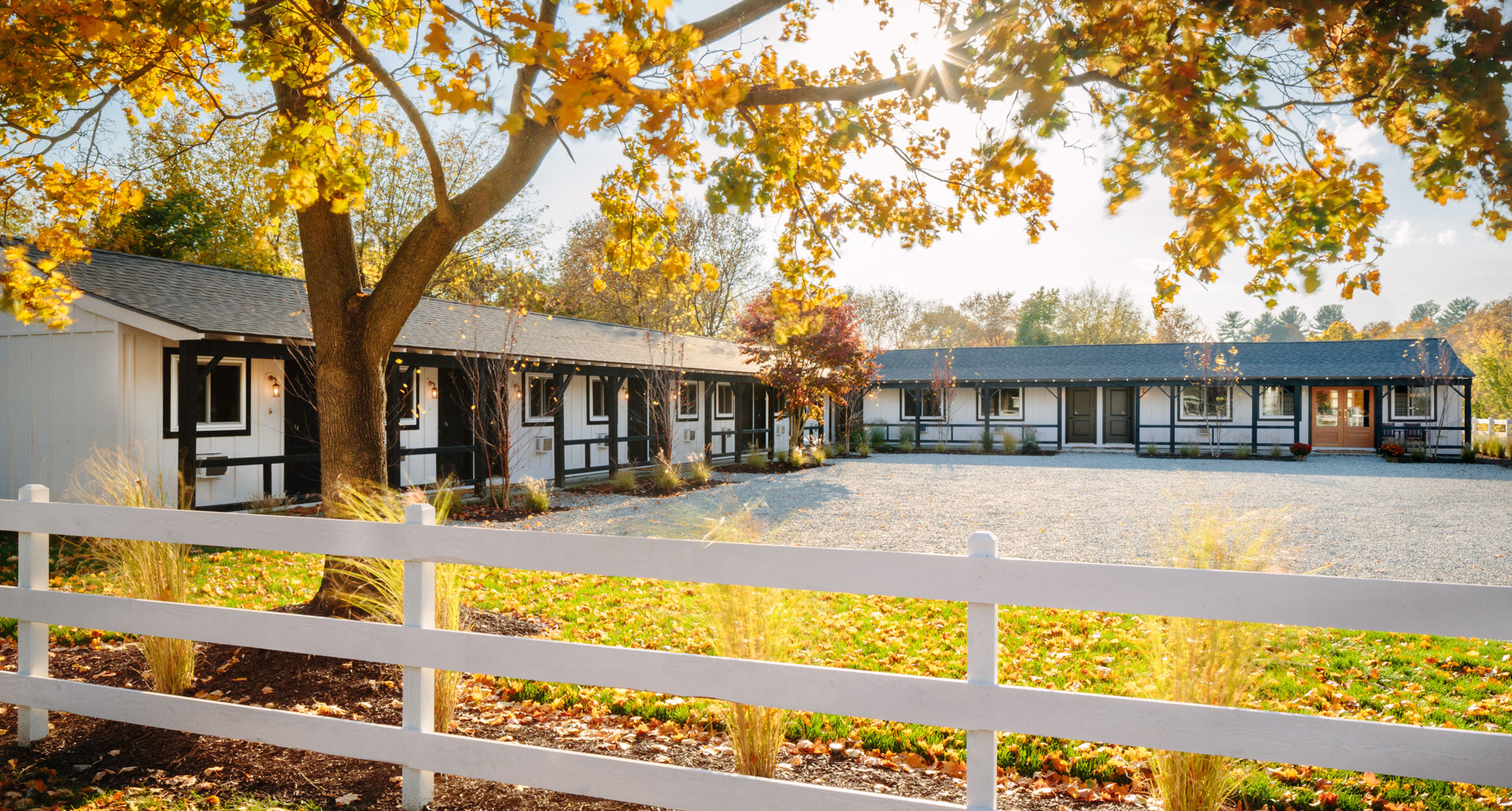 About three hours’ drive straight up the Hudson River from New York City is the town of Saratoga Springs, a community that’s undergoing a bit of a renaissance as city folk rediscover the charms — and low rents — of small-town life. It’s also famous for the Saratoga Race Course, which hosts horse races in the summer months. And just across the road from the racecourse’s paddock and stables is the reason we’re here: the Brentwood Hotel (not just designed but also owned by the same Studio Tack, from the Sound View Greenport above). 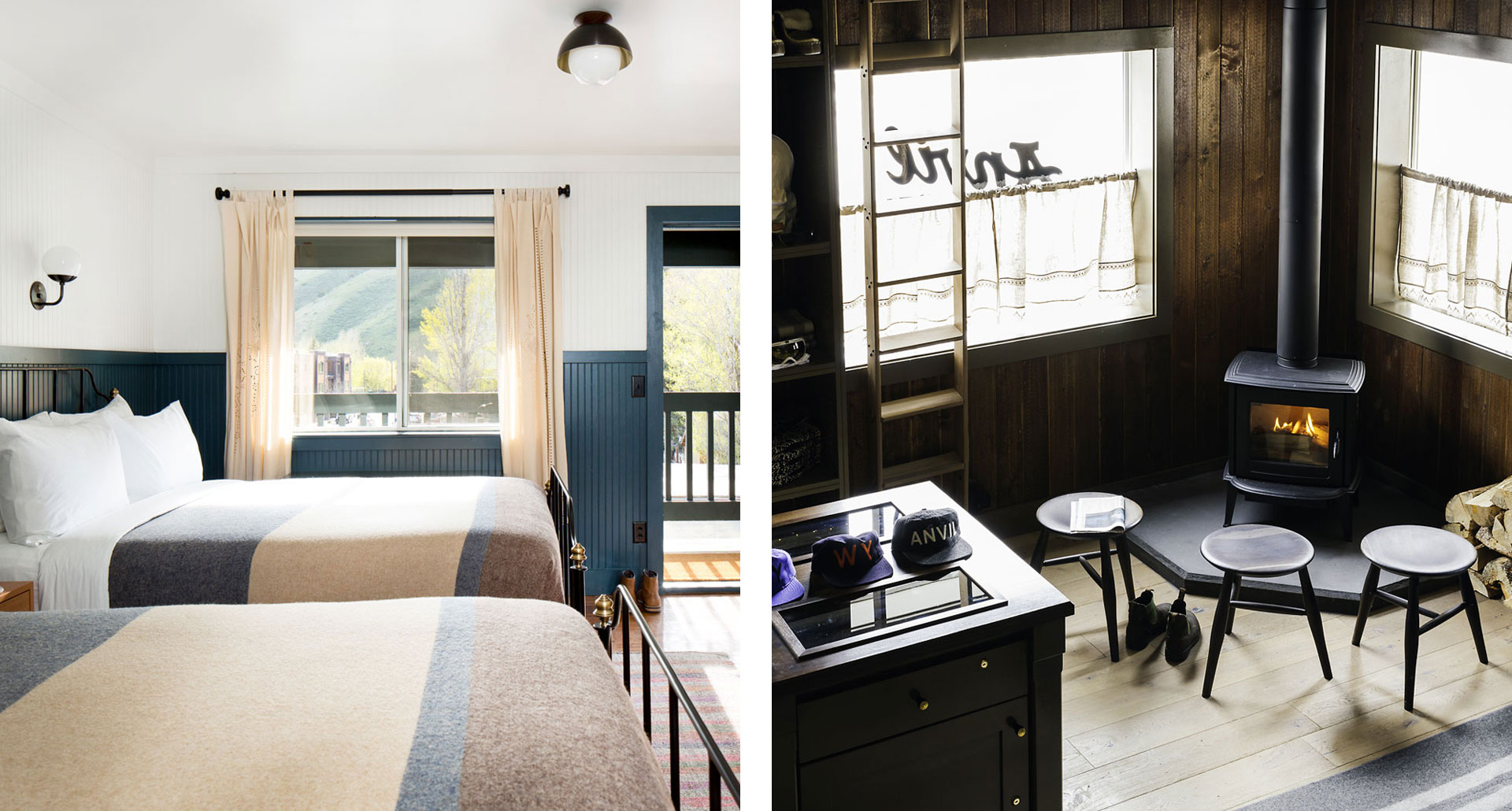 The Anvil Hotel is a no-frills motel upgraded into something stylish, but rather than high gloss it aims for a retro unpretentiousness, and hits the nail right on the head. The designers — Studio Tack yet again — can boast some Ace Hotels experience on their collective résumé, the Anvil is reminiscent of the current wave of hip youth-market boutique hotels. The owners, however, come by their Jackson connection honestly; one of them worked the front desk at this very motel, in its earlier life. 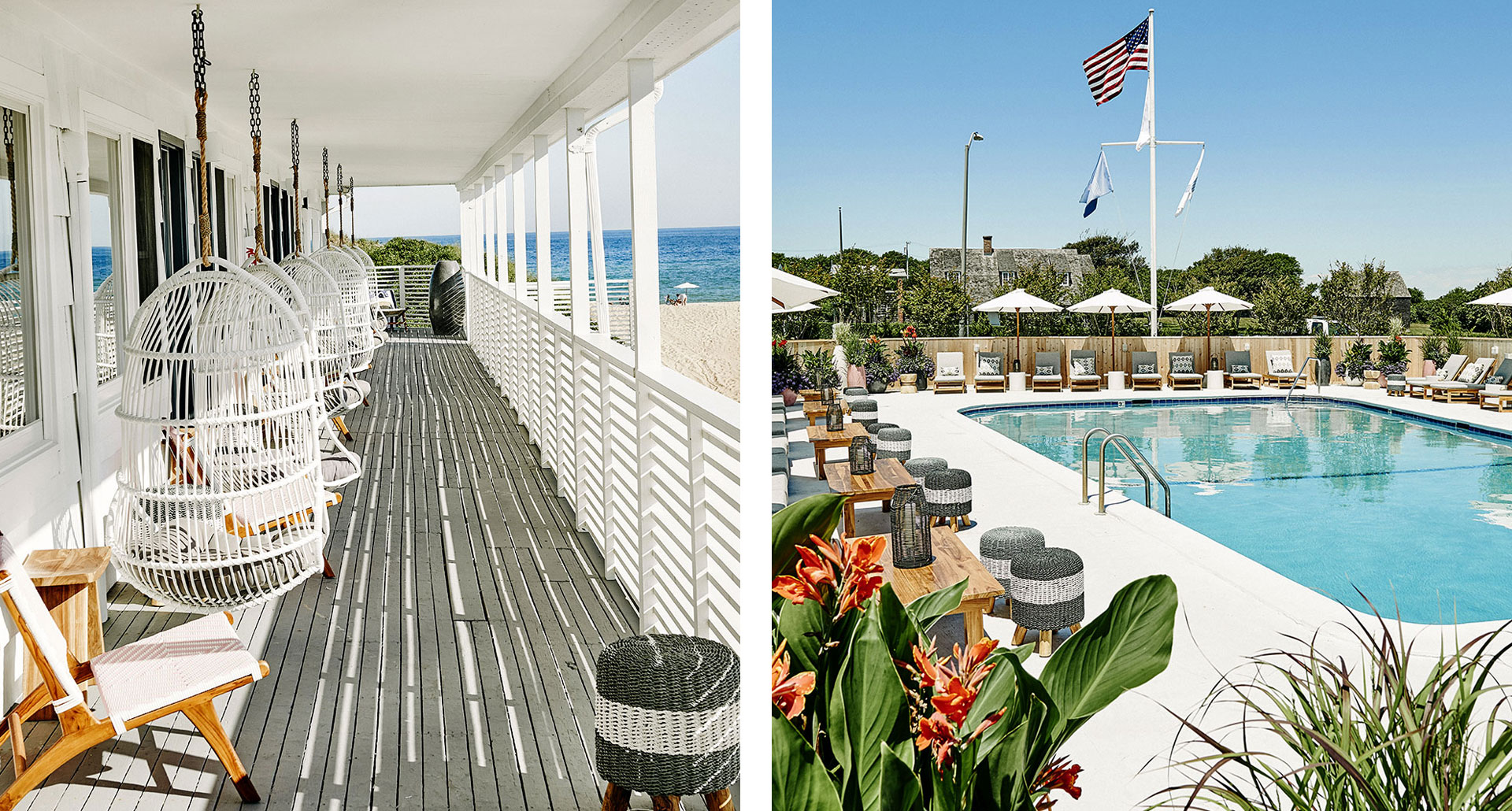 Lately Montauk has seen a major resurgence as a travel destination, and in summertime the revelry kicks into high gear. In contrast, there’s Hero Beach Club — it’s not an anti-social place, but it is a tranquil place, a proper getaway, a repurposed motel featuring rooms that prize stylish coziness over glam opulence. Public spaces include the garden/lawn, with its fire pits and cabana seating, as well as the pool deck and Umbrella Beach. 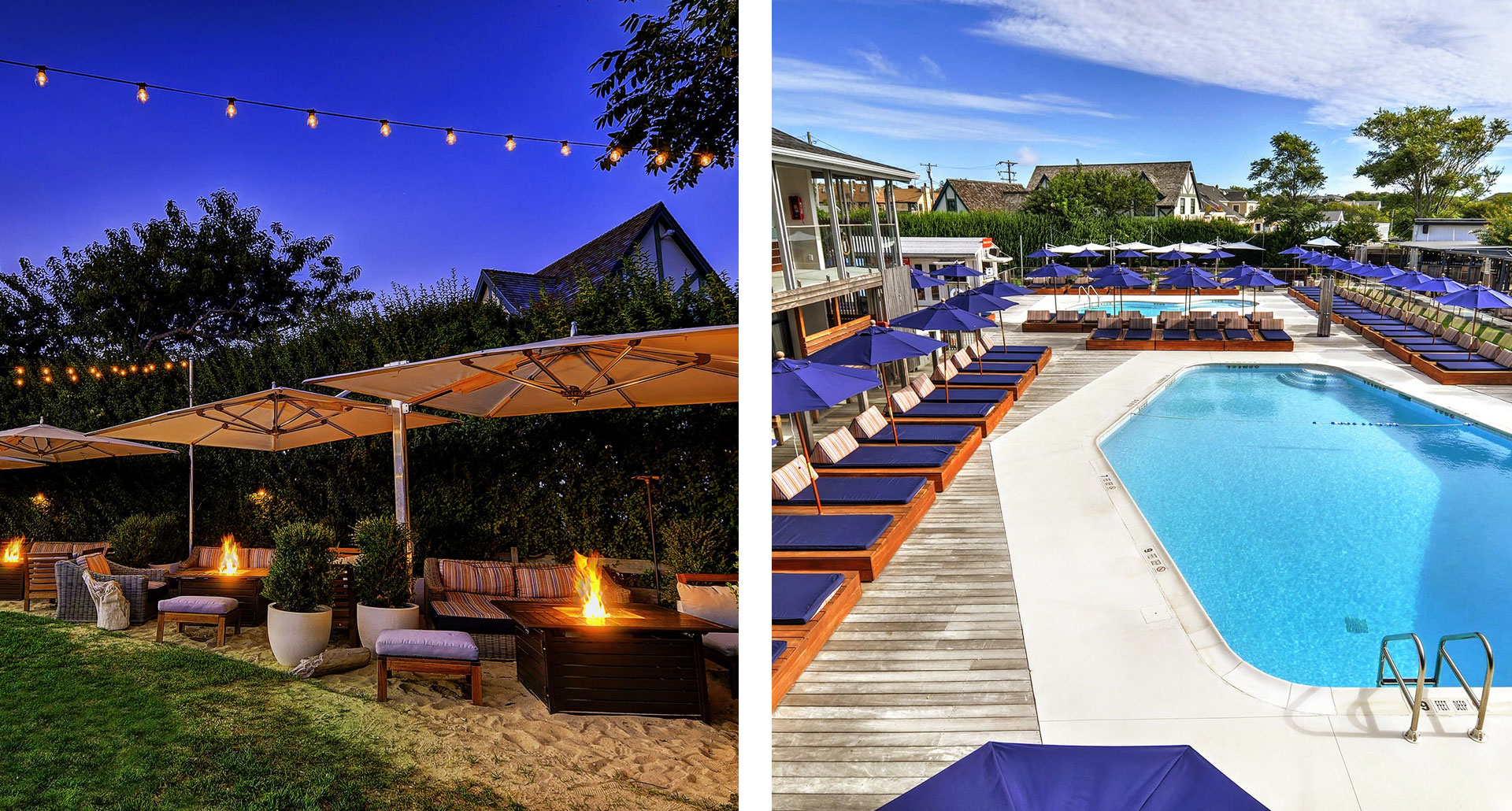 Another Montauk motel, another fine introduction to the charms of this laid-back yet in-demand destination. With 33 rooms, the Montauk Beach House is a touch more than a beach house, strictly speaking — though the vintage-inspired décor and the loft-like guest-room layouts do their part to create a residential vibe. It’s all about the social spaces; stylish daybeds surround a pair of pools, and lounge seating scatters across the lawn. 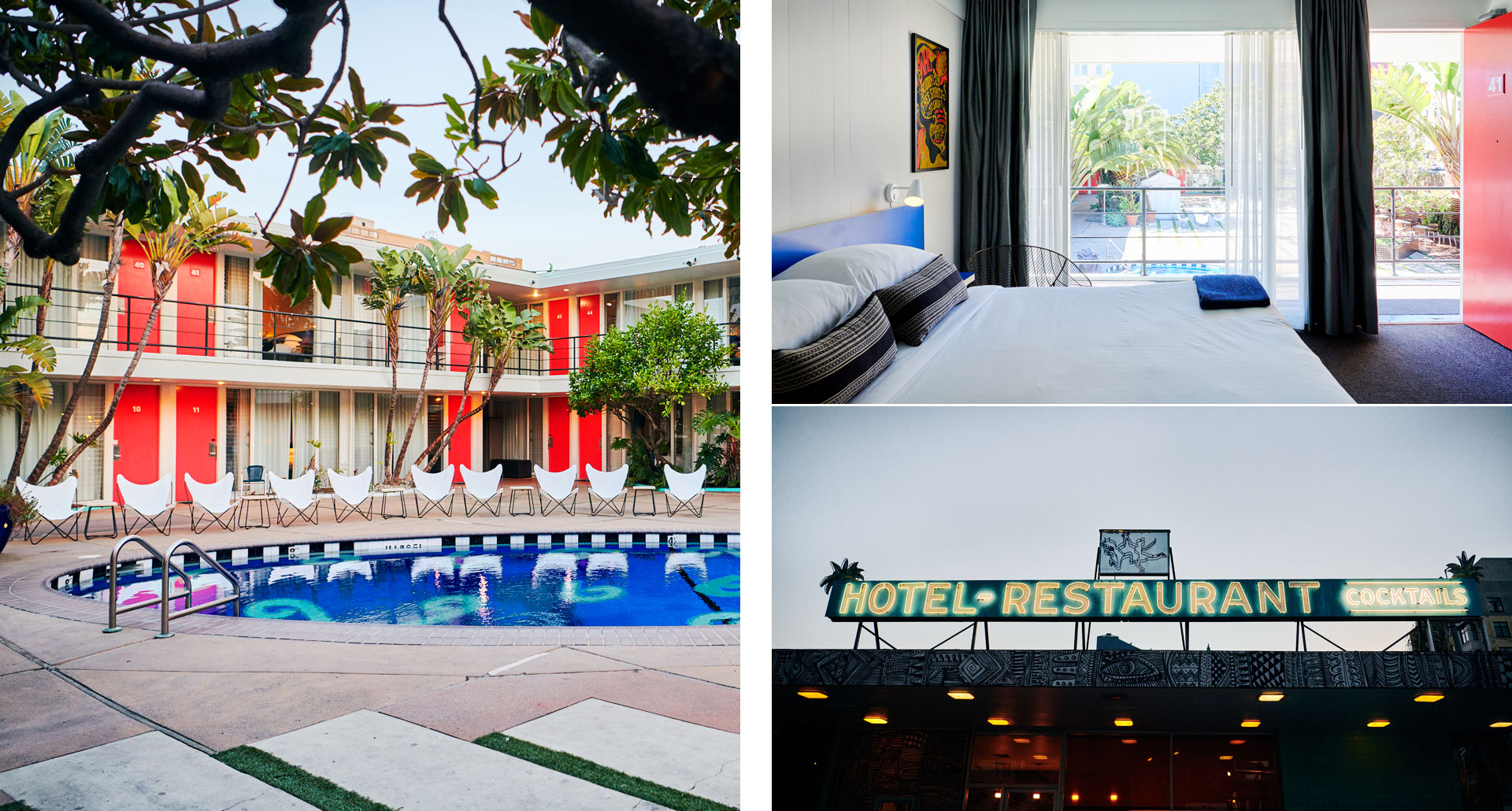 San Francisco’s original rock-and-roll hotel, the long-serving Phoenix was the lodging of choice for rock stars from David Bowie to Nirvana. And just when it was beginning to feel like it had lost touch with its roots, it’s been taken over by Bunkhouse — it’s an inspired combination, one that effortlessly improves the Phoenix’s style and atmosphere without sacrificing its rock-and-roll spirit. It’s no luxury hotel, but it’s perfectly comfortable, and it’s every bit the musician’s favorite it once was — there’s no telling who you’ll find sitting by the pool, or occupying a booth at Chambers, the hotel’s restaurant and bar. 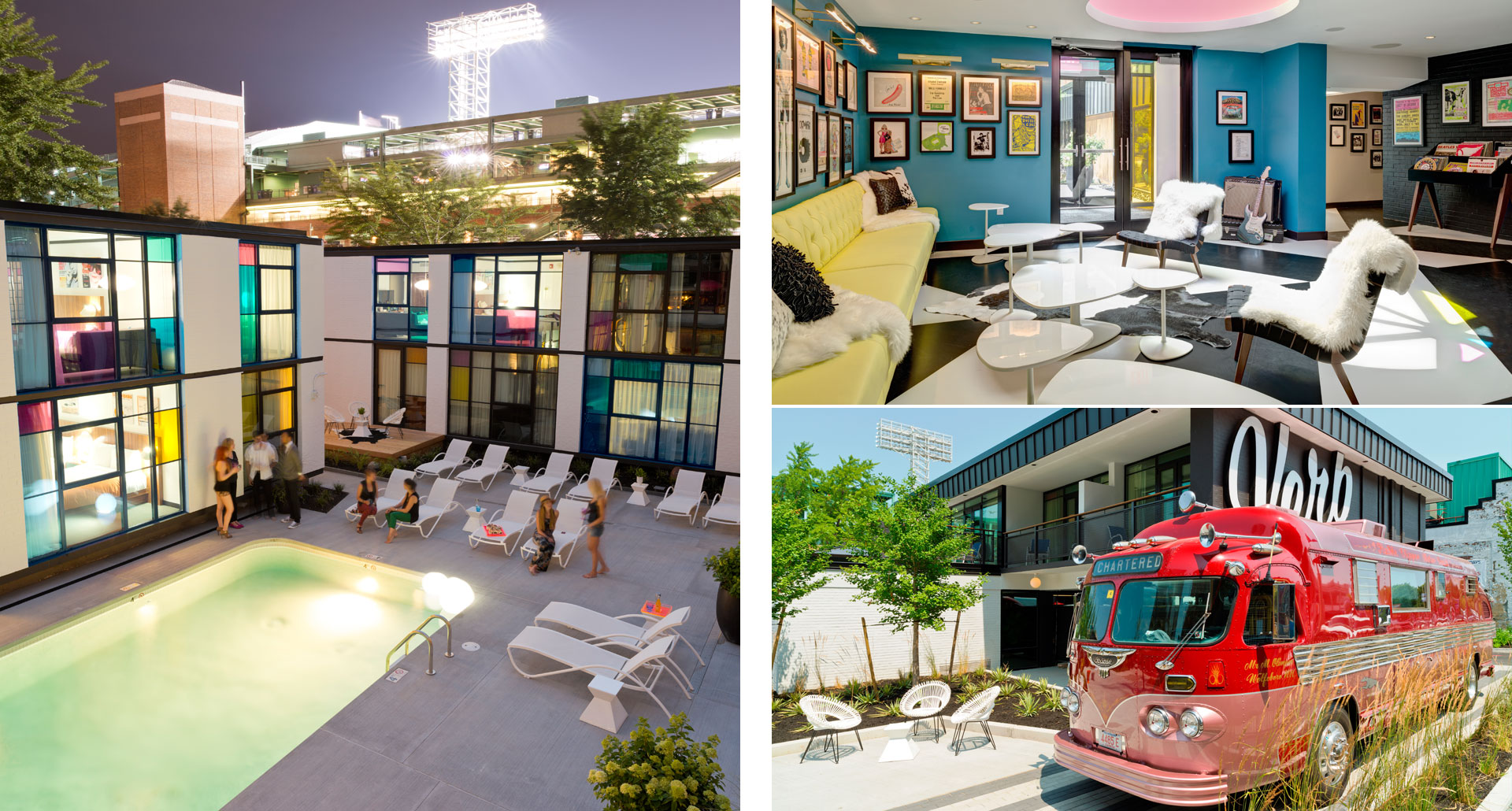 To find a disused mid-century motel in the shadow of Fenway Park, Boston’s legendary baseball stadium, is rare luck. The obvious thing to do might have been to turn it into another place of Red Sox worship, but Boston has plenty of those. Instead the proprietors of the Verb chose to pay homage to the Fenway/Kenmore neighborhood’s role in rock history — and the result is another rock-and-roll hotel, this one custom-built for the purpose. 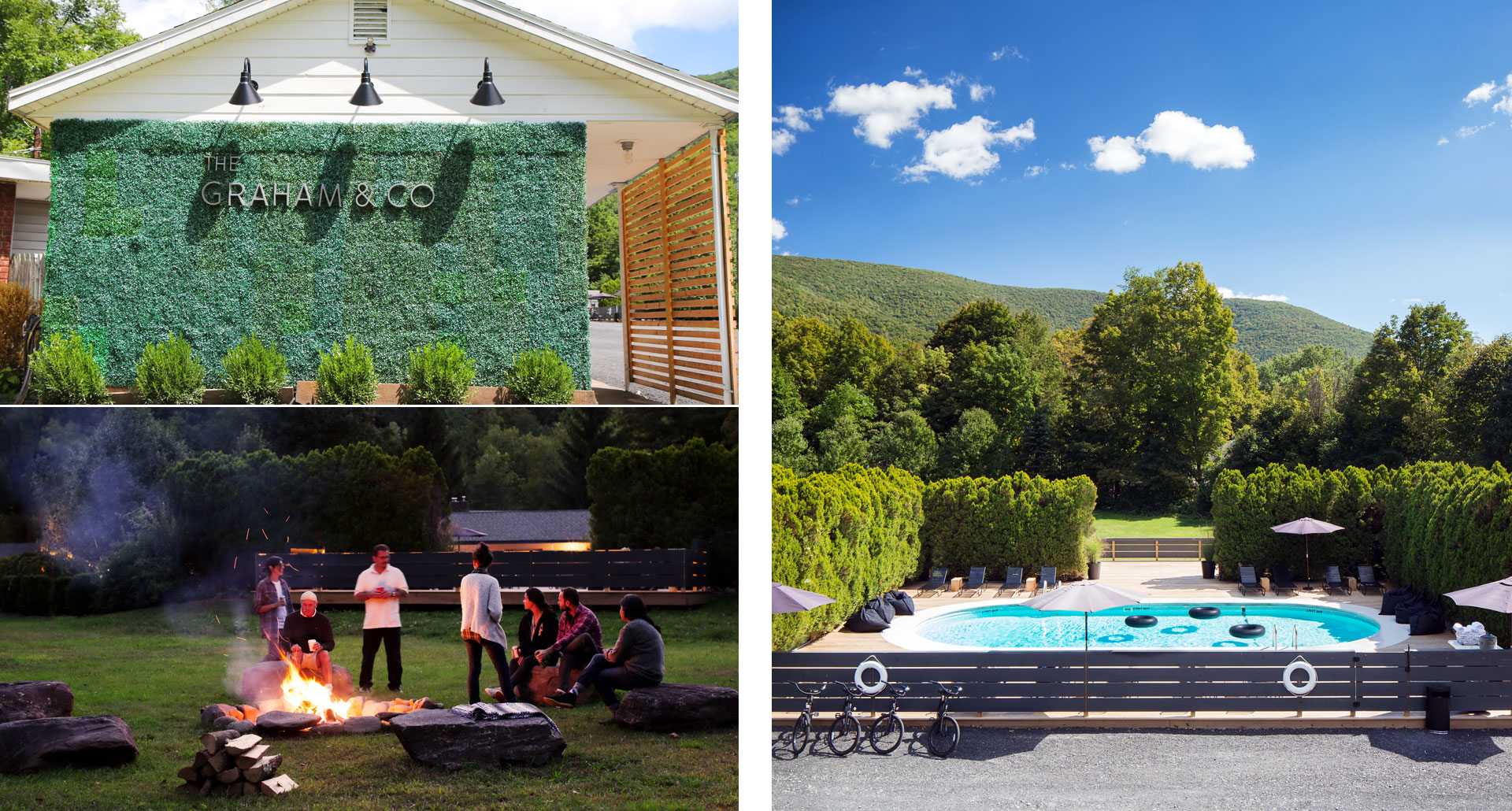 A renovated twenty-room motor lodge in Phoenicia, just west of Woodstock, Graham & Co. is the sort of place that might qualify as central New York State’s best-kept secret, if only people would stop raving about it for a second. Vintage charm, a savvy collector’s eye, and a keen design sensibility make city-bred boutique-hotel freaks feel right at home, while free bikes, patchy cell service and a bit of a summer-camp vibe make it pretty tough to beat. 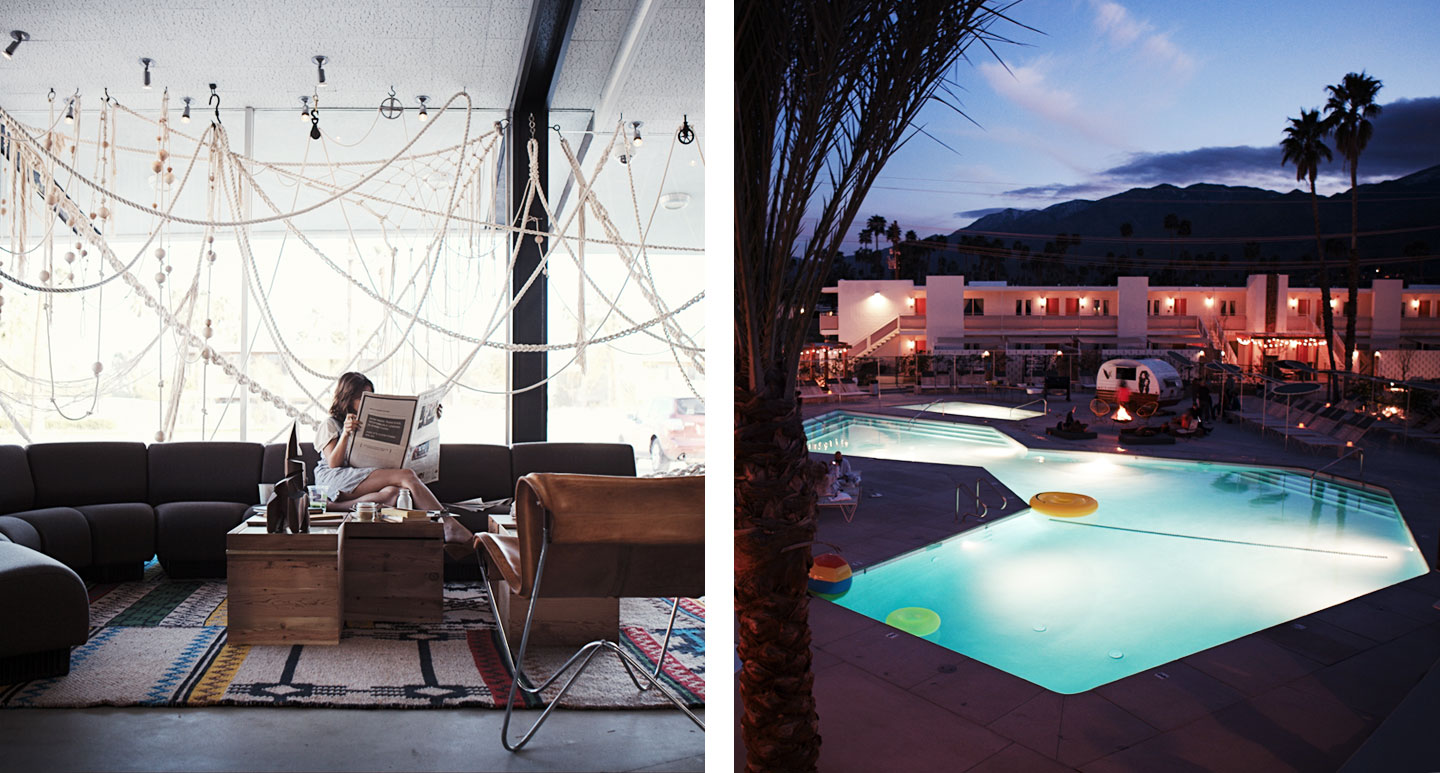 When the Ace Hotel & Swim Club first opened, it felt like a bit of a curveball — but if anyone’s capable of swimming against the twin tides of worshipful mid-century design museums and bland contemporary luxury resorts, in the process making Palm Springs both hip and affordable once again, you had to imagine Ace had a shot. Theirs is not the intimidating, almost alienating brand of cool that seems to be the goal of the typical modern urban boutique hotel, but an inclusive, fun vibe — and it’s fair to say it served as the inspiration for a few of the others on this list.