London is one of Tablet’s favorite cities, and its hotels are among the best in the world. But there’s more to England than the capital — and with springtime suddenly in the air, the country calls.

London is one of Tablet’s favorite cities, and its hotels are first-rate. But there’s more to England than the capital — and with springtime suddenly in the air, the country calls. (Anyway, you probably already know that we’ve got a plentiful supply of the best boutique hotels in London.) If you’re a Londoner looking for a luxury hotel or a country-house weekend within a couple of hours’ travel, you’re in luck — from the Cotswolds and the New Forest to the outer suburbs of London itself, you’ll find no end of weekend destinations. 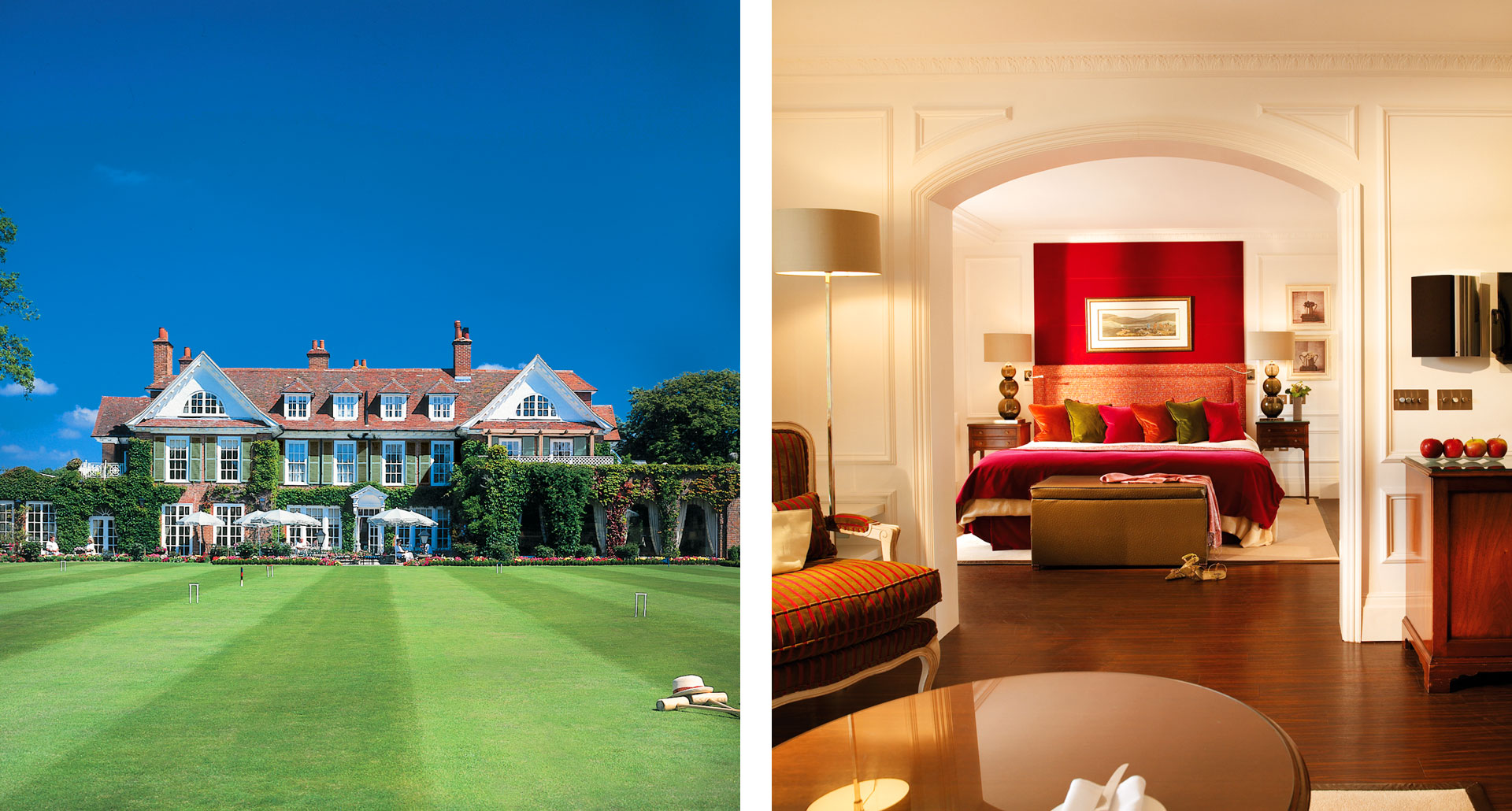 For the classic country-house experience you can’t go wrong with Chewton Glen. Located in New Milton, it’s close to the New Forest and even closer to the Channel, a short walk from the beach. The rooms are lovely, the grounds impeccably kept, and the new Treehouse Suites are a revelation for those willing to trade traditional architecture for added luxury and privacy. The spa and country club offer a dizzying array of attractions, and the Dining Room makes extraordinary use of the local produce. 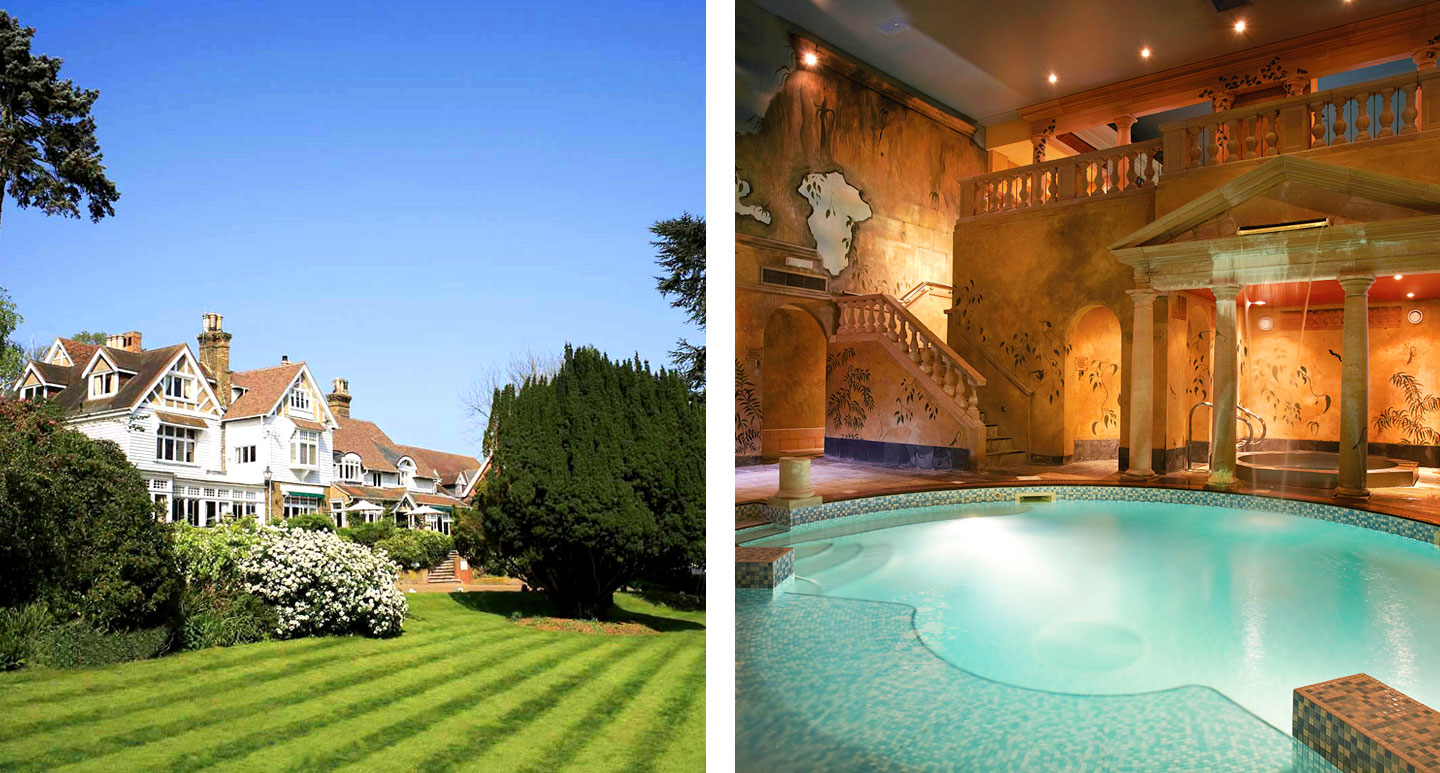 Located in Kent, but just inside the M25, Rowhill Grange could practically be a day trip from London — and the time you save commuting is more time for a leisurely weekend. It’s less monumentally imposing than some of the farther-flung country houses, and inside it’s a mix of cozy 19th-century charm and delicate contemporary luxury. And with a spa that goes by the name of Utopia, it’s clearly intended to be a world apart from the everyday. 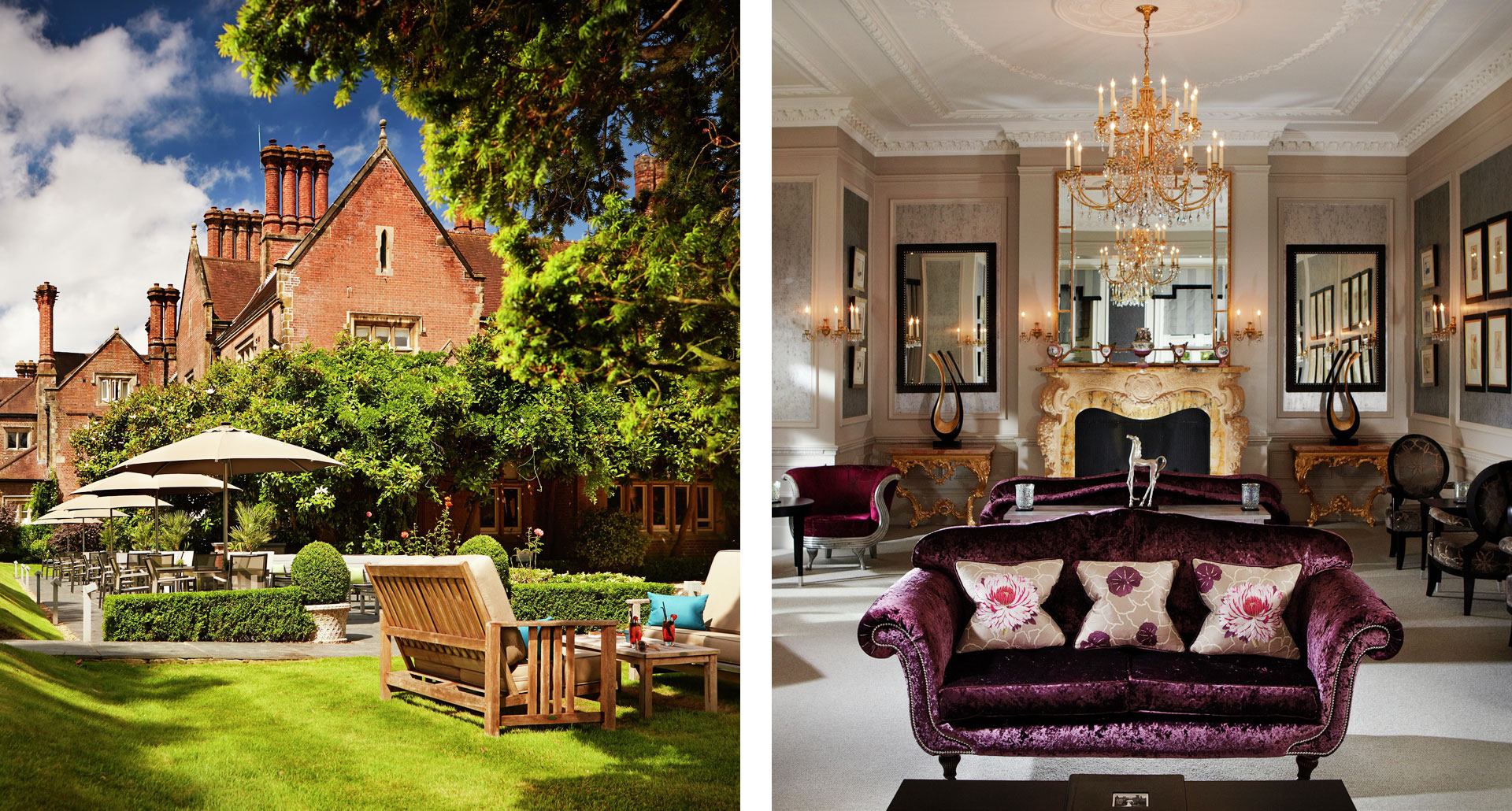 You don’t have to travel all that far to escape London’s urban bustle. The Alexander House may be set on over 100 acres of Sussex parkland, but it’s less than 15 minutes from Gatwick. Its Thirties architecture makes it unique, and its interiors, though recently redesigned in a colorful contemporary style, pay homage to the period’s Art Deco heritage. Another Utopia spa — the Alexander House shares ownership with Rowhill Grange — provides all the inducement you’ll need for a long weekend out of town. 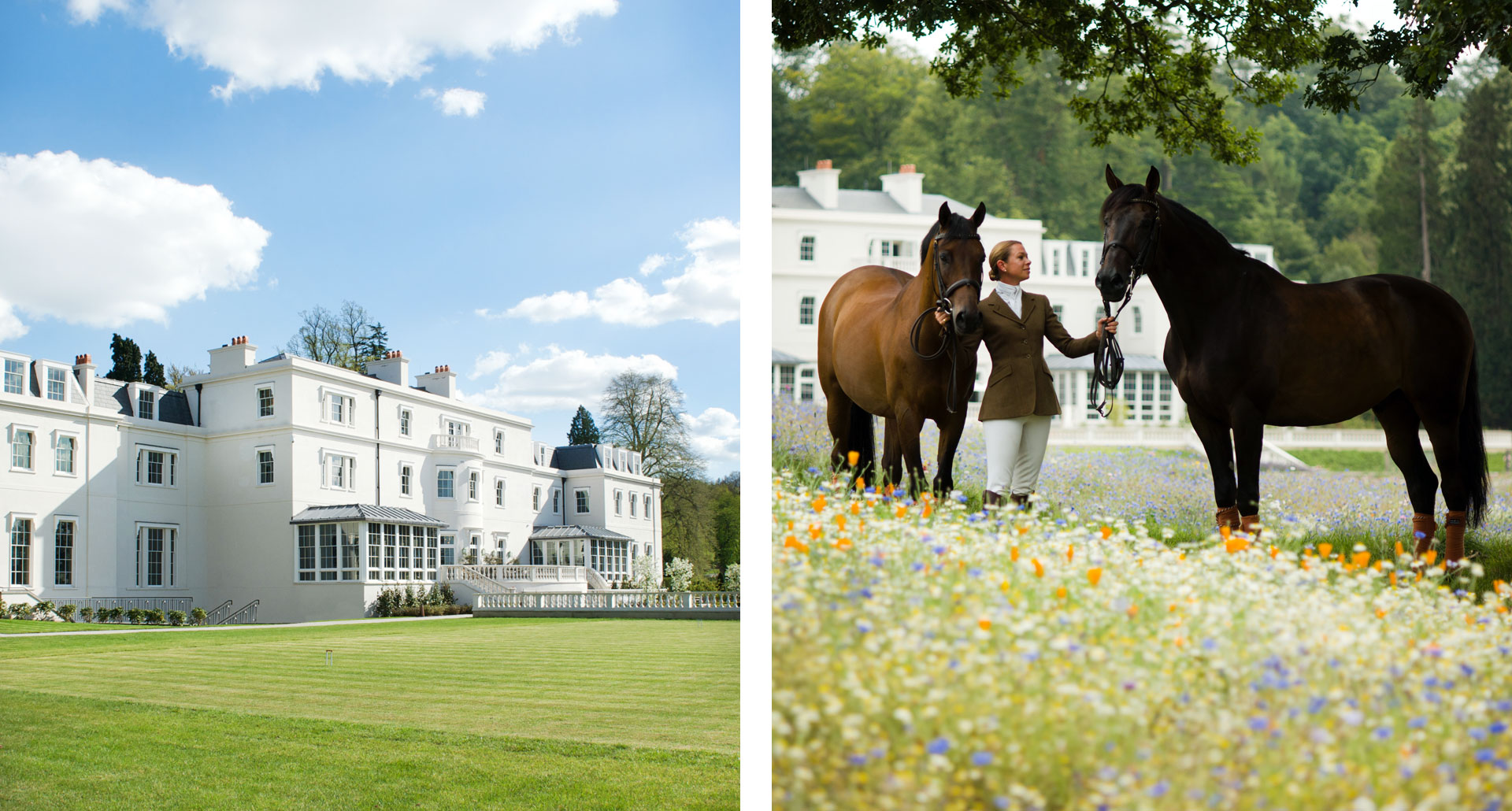 Just far enough from London to feel like a proper getaway, Coworth Park, just outside of Ascot, East Berkshire is nevertheless only 45 minutes from the capital. It’s an authentic 18th-century Georgian country house, now operating as a Dorchester Collection luxury hotel and spa. You’ll have no trouble filling a weekend with activity, from the luxury spa and the highly regarded Restaurant Coworth Park to the tennis courts, croquet lawn, and the equestrian center — which includes not one but two professional polo fields. 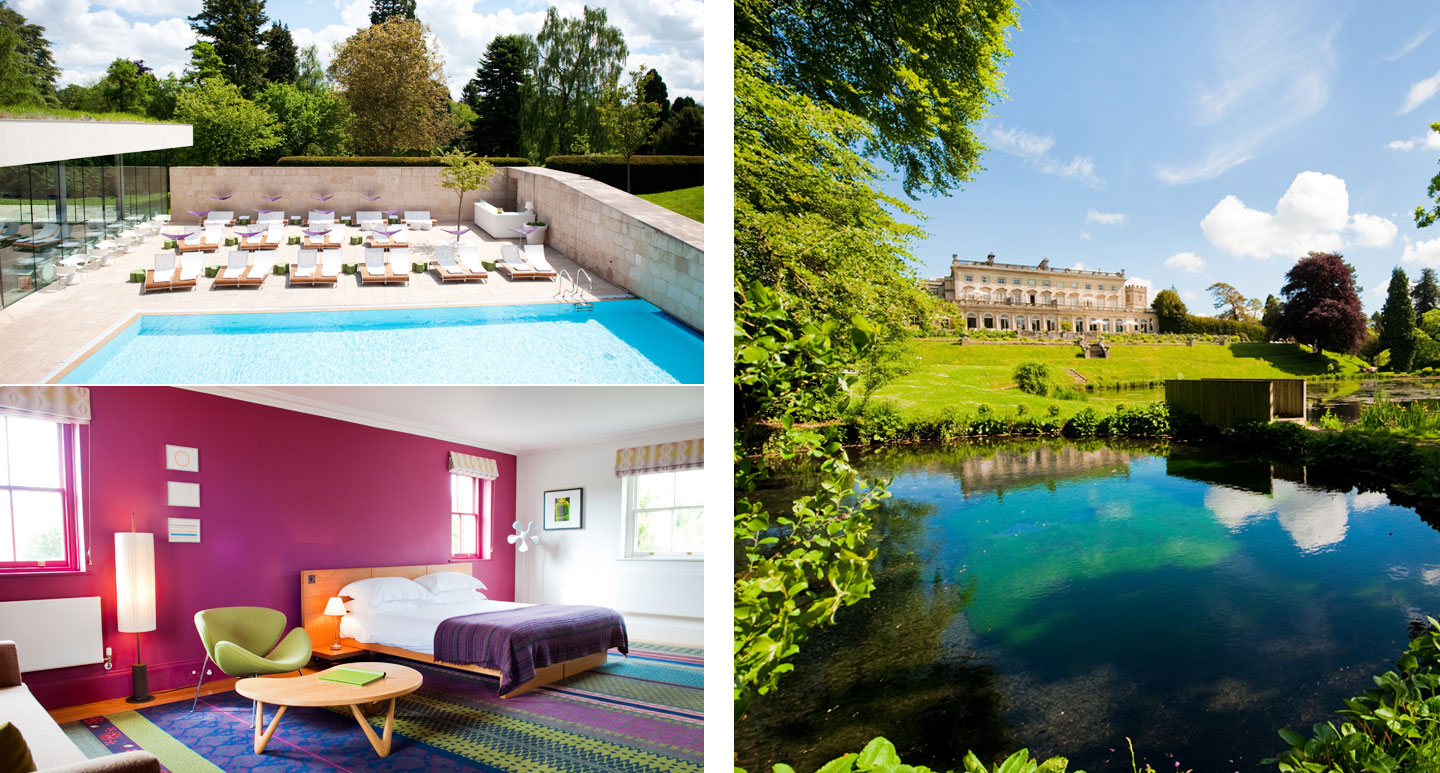 The Cotswolds are a favorite escape for stir-crazy Londoners, and it’s no wonder. Drive an hour and a half from Heathrow and you’re in the famous hills, and just short of Cheltenham you’ll find Cowley Manor, as stately an Italianate villa as you’re likely ever to see. That’s outside — the interiors, by contrast, are full of modernist furniture and bold swathes of contemporary color. Of particular note, both to architecture buffs and wellness fanatics, is the C-Side spa, which resembles a modern art museum. 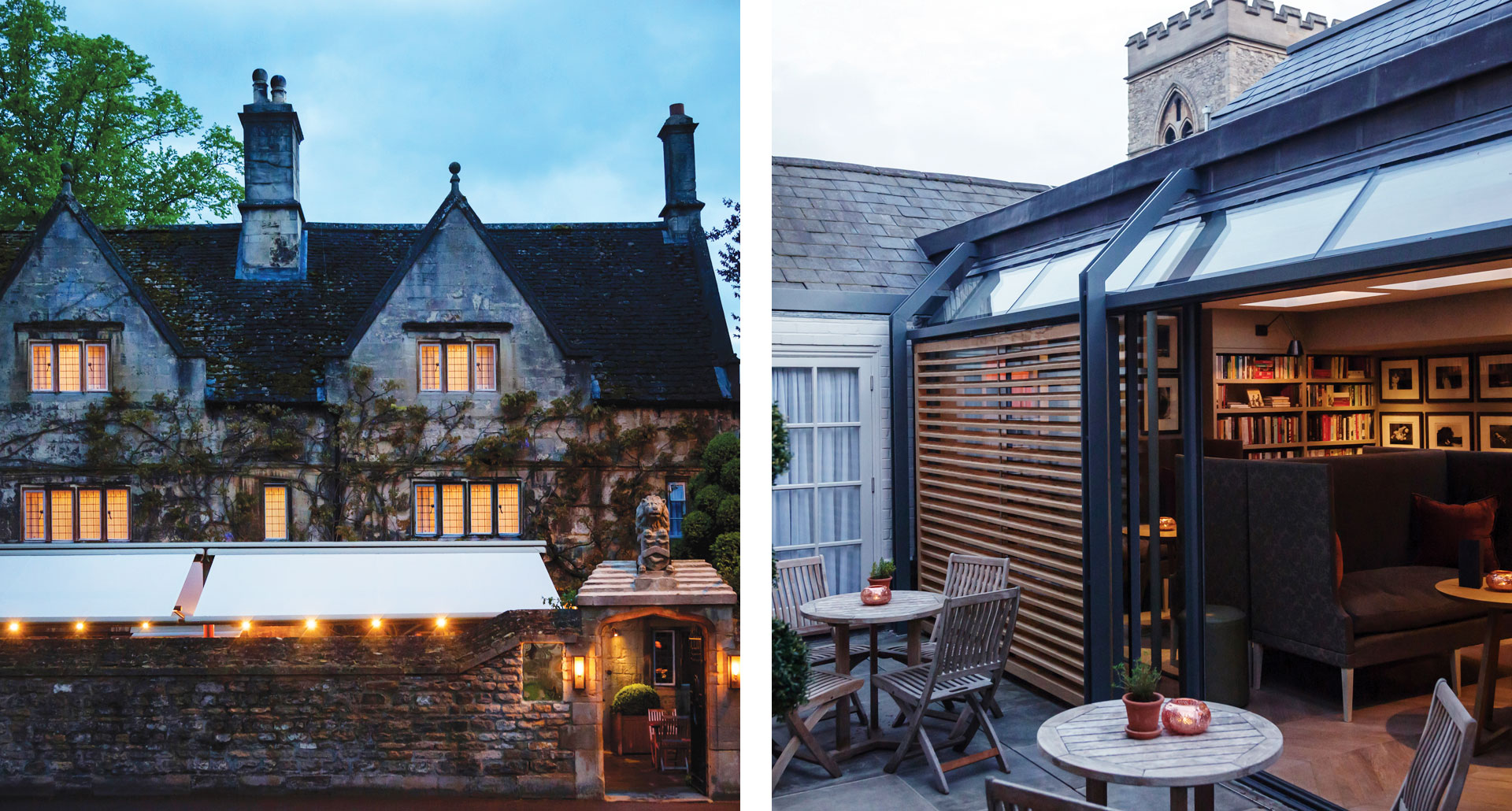 Country house charm meets modern interior design, this time not on some rural estate but in Oxford, surrounded by the colleges of England’s oldest university. By their standards this 17th-century edifice is a newcomer, but there’s plenty of ancient atmosphere to go round. The Old Parsonage is warm, intimate, luxurious, and tuned in to the specific character of its setting — borrow a bicycle to explore Oxford on wheels, or luxuriate in what must be the most thoughtful hotel library we’ve ever seen.

The Royal Crescent Hotel and Spa 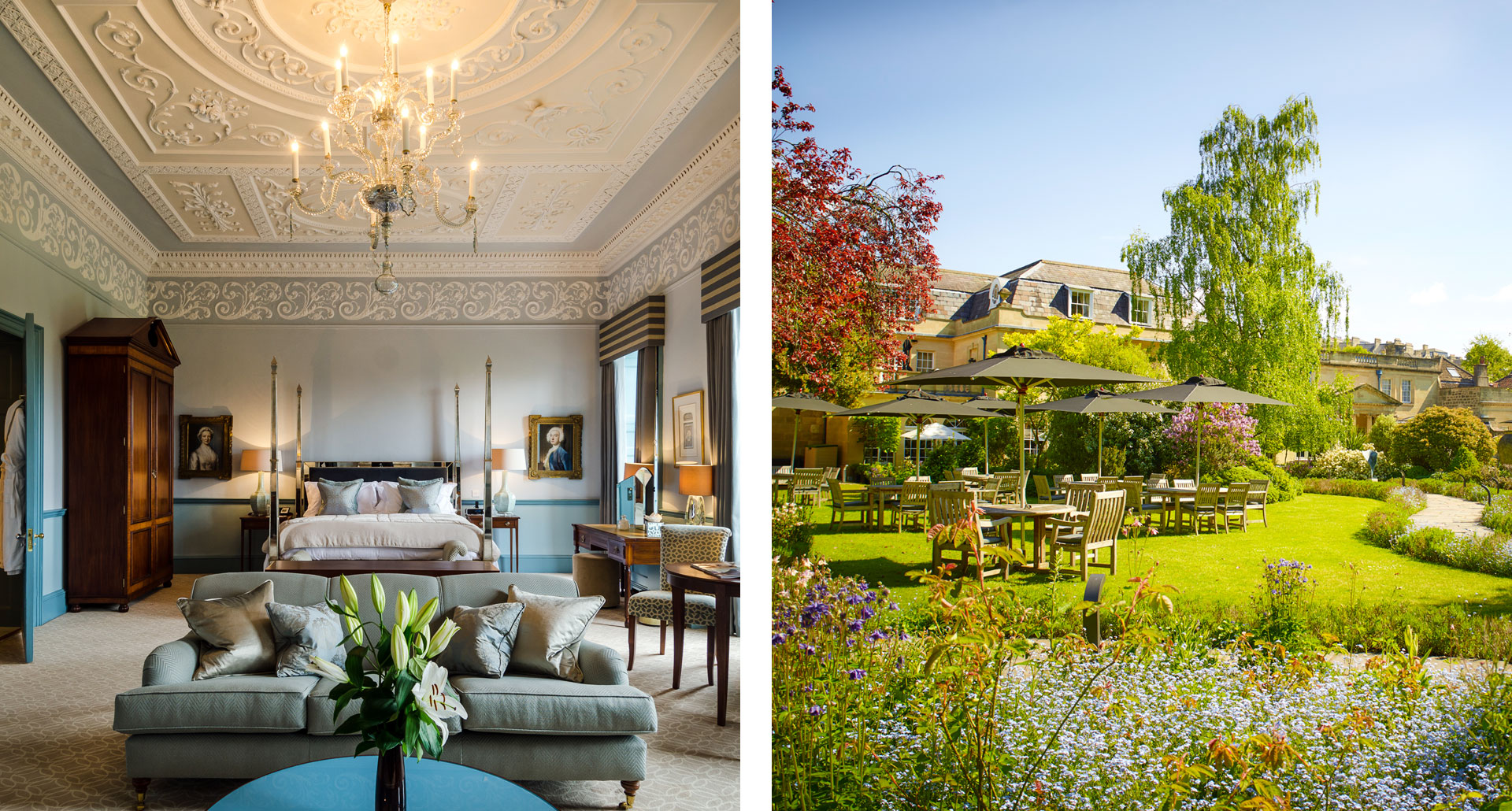 The Royal Crescent itself is Bath’s most famous landmark, the five-hundred-foot arc of Georgian townhouses just off of Victoria Park. And the Royal Crescent Hotel is made up of two adjoining houses within the crescent as well as some satellite buildings across the garden; here you’ll find a bit of an urban/rural mix, each of the guest rooms individually designed and uniquely laid out. Bath is a classic spa town, and if you’re here for the weekend you’ll no doubt set aside time to partake in the healing waters — and the town center is just a few minutes away. 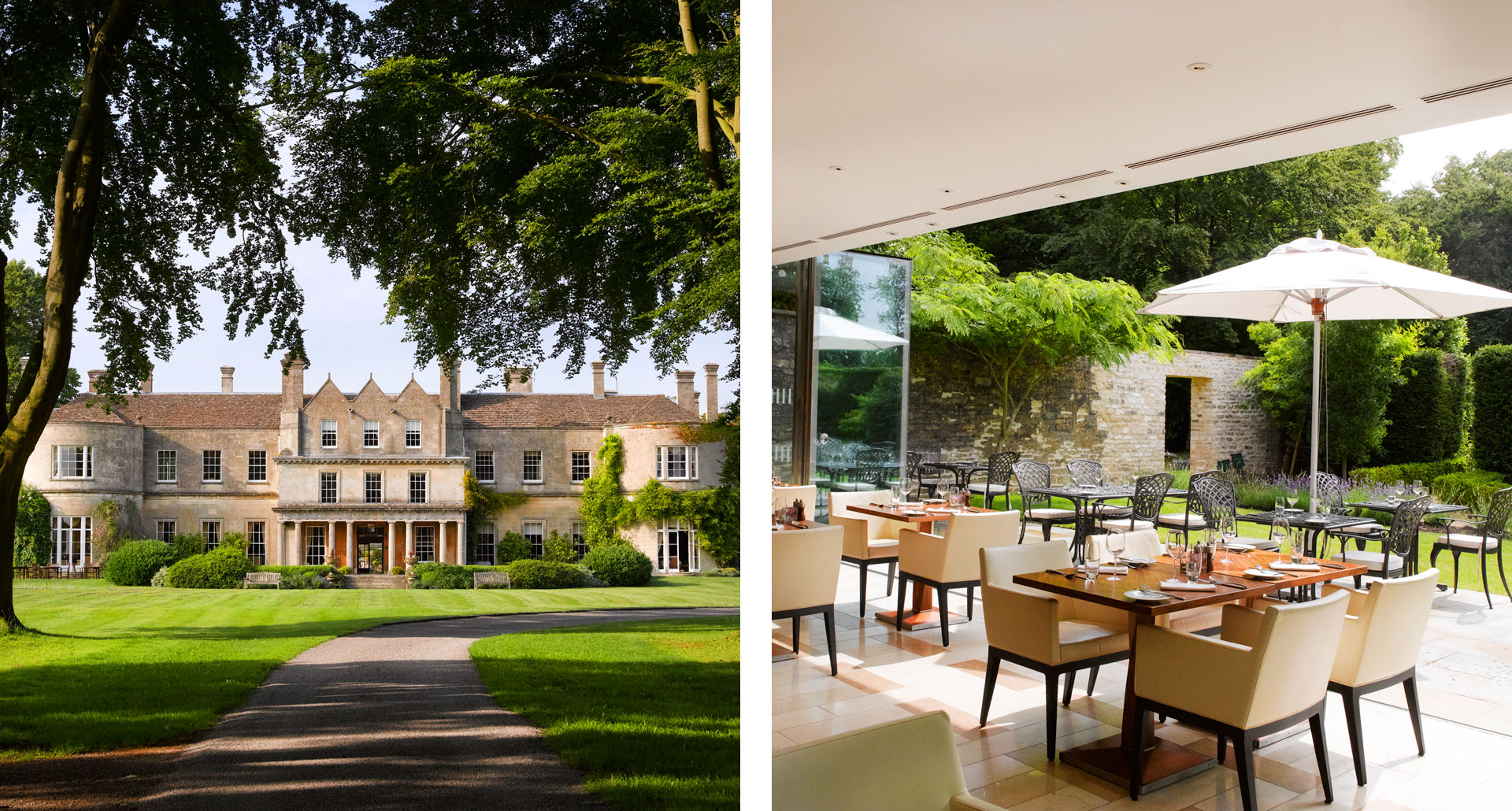 Set on a 500-acres estate in the Cotswolds just outside of Bath, Lucknam Park is the classic country-house luxury hotel par excellence. The house’s Palladian architectural style is familiar from Jane Austen adaptations, and the accommodations are long on period-correct historical charm as well. Meanwhile the spa complex is as modern as they come, and the Michelin-starred restaurant serves urbane, contemporary cuisine — British cooking has come a long way since Austen’s day. 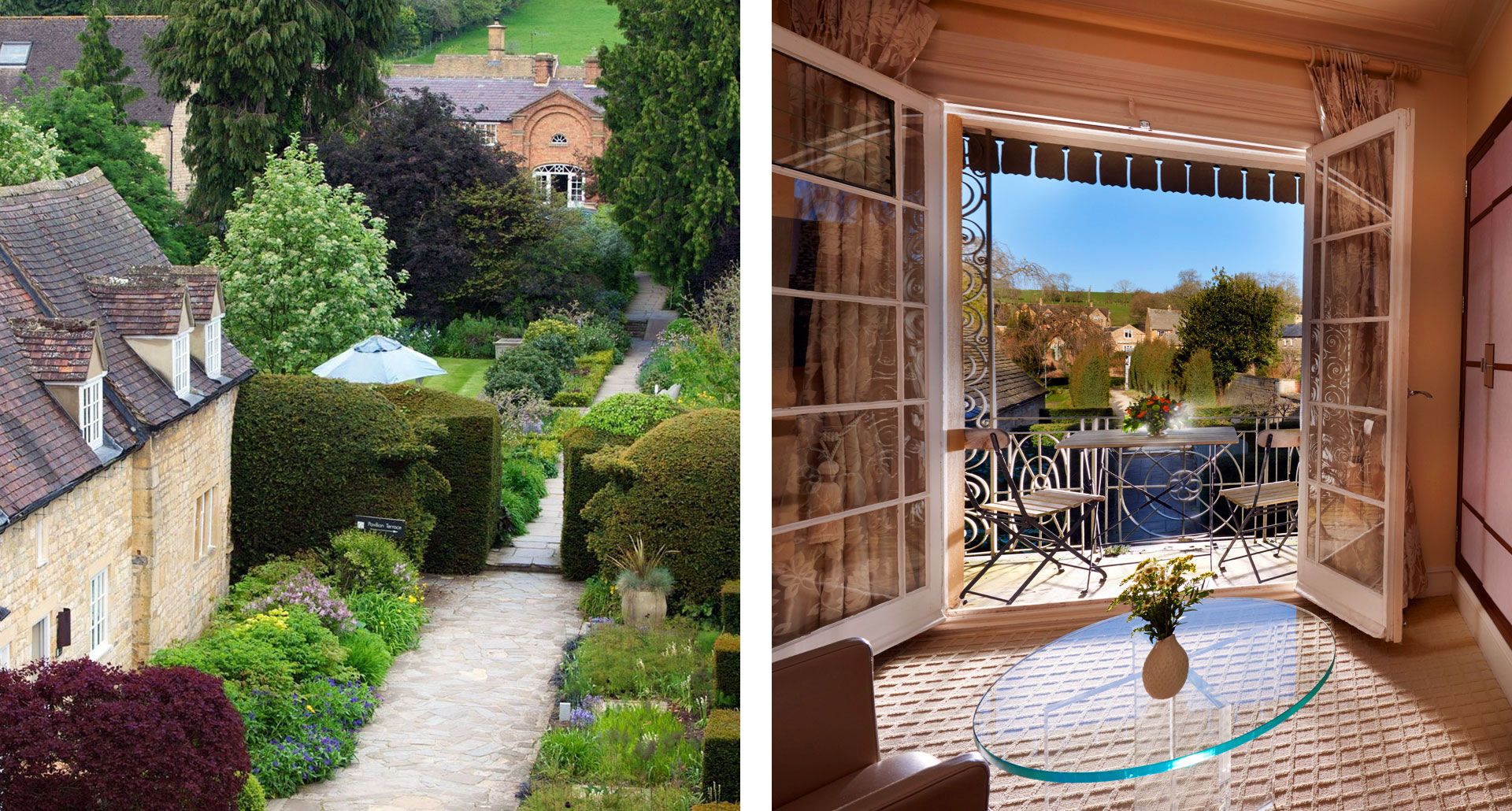 The Cotswolds village of Chipping Campden isn’t just blessed with an adorable name — it’s one of England’s most picturesuqe conurbations as well. Cotswold House Hotel and Spa is set right in the village’s center, and this Regency hotel’s Arts and Crafts–influenced style is a touch more charmingly rustic than the country-house norm. The restaurants and spa are big draws for weekenders, as is the Cotswold Way, a hundred-mile hiking path that passes right through Chipping Campden.

The Varsity Hotel and Spa 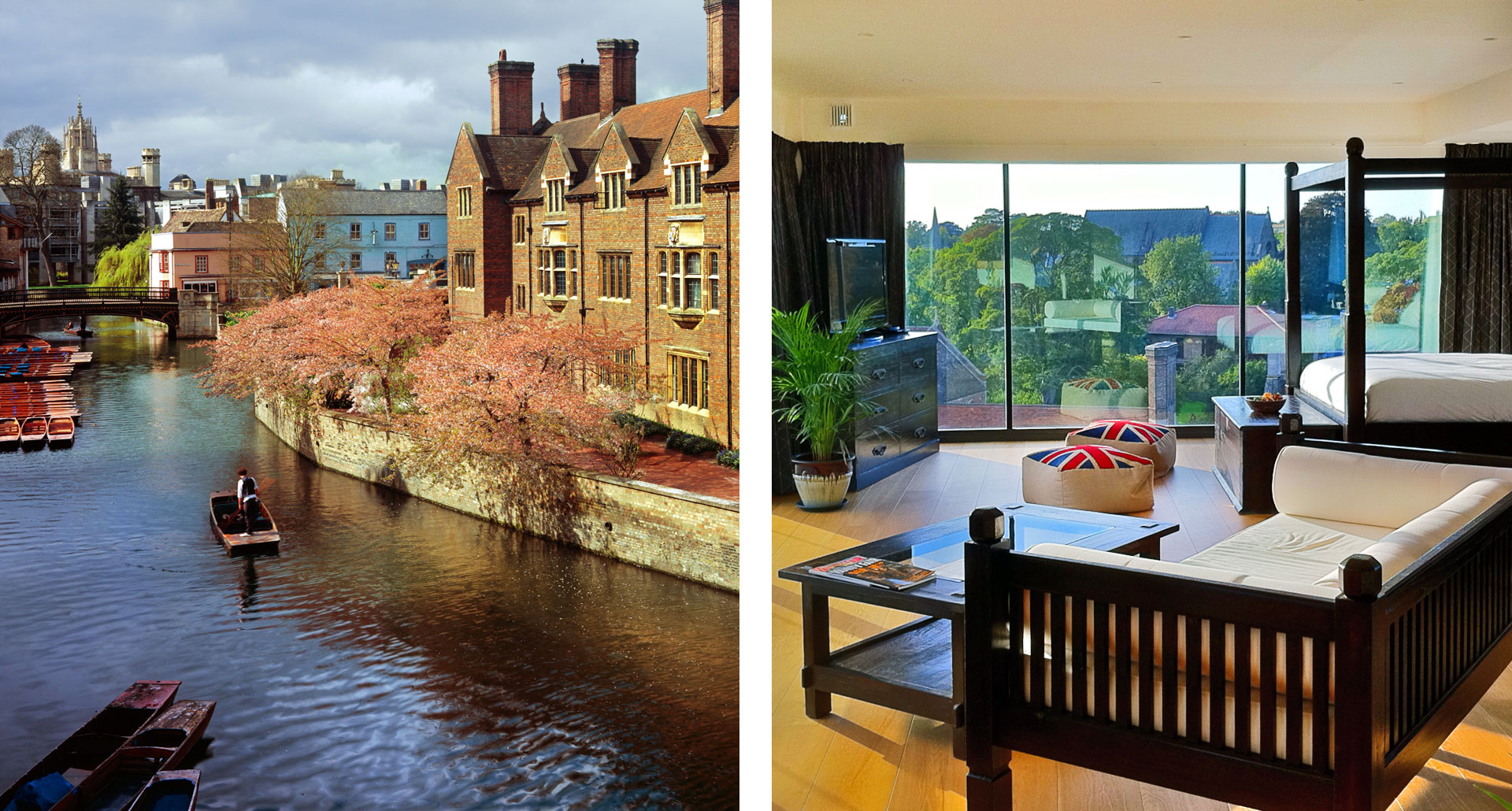 When it comes to the question of Oxford vs. Cambridge, we say why not both? For a more modern perspective on an ancient university town, the Varsity is just the ticket. It’s a contemporary building with lively, stylish rooms and a rooftop terrace that takes in views of Magdalene College, Jesus Green, and the scenic surrounding town. Proof that a spa weekend doesn’t have to mean entirely turning one’s back on more intellectual pursuits.

Can’t make it out of the city? Try a staycation at one of the Top 10 Boutique Hotels in London.